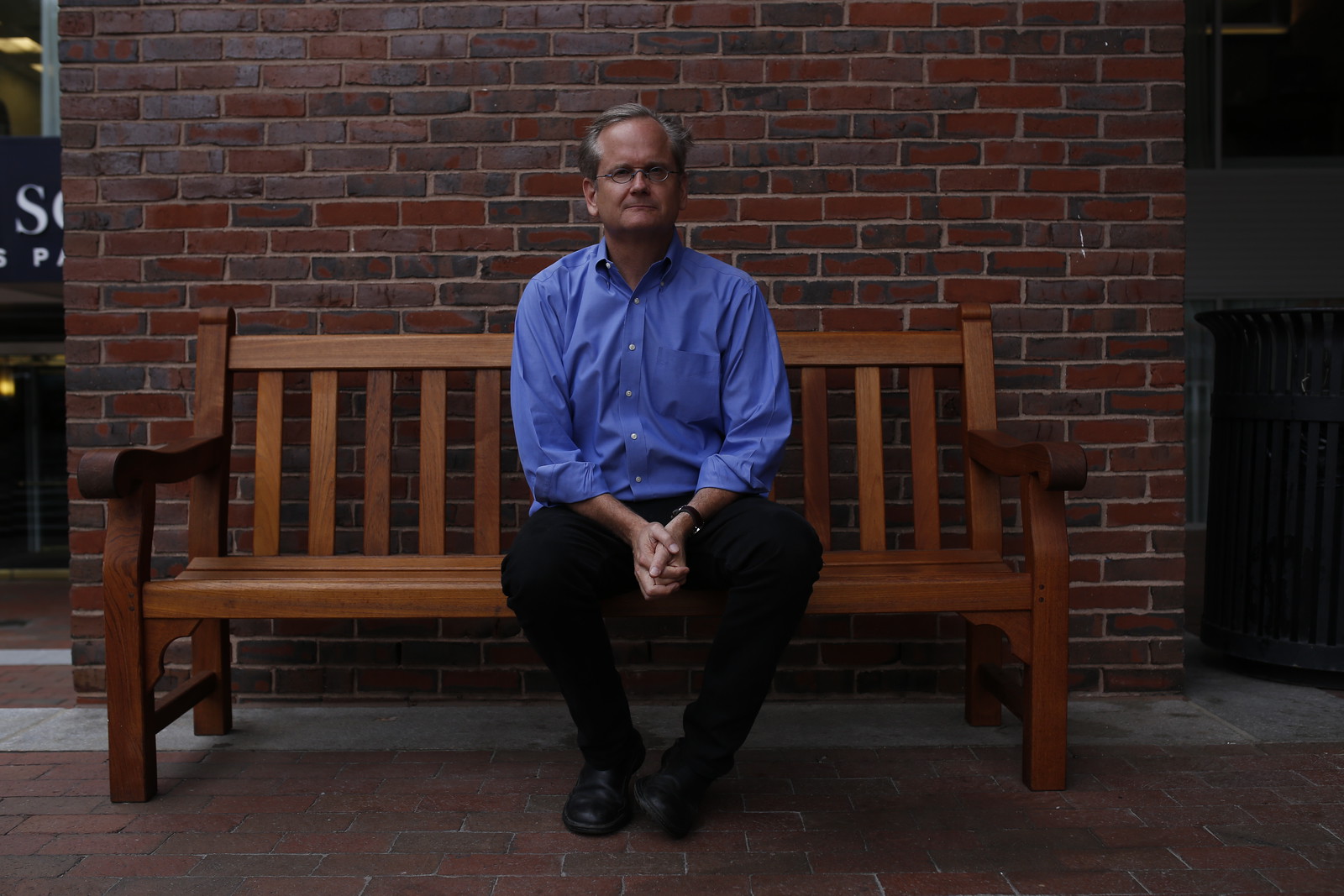 Larry Lessig poses for a photo on a bench outside the Charles Hotel on Sept. 10.
By Jamie D. Halper, Crimson Staff Writer

Since Donald Trump’s upset victory in the 2016 presidential election, Lessig, who briefly ran for the Democratic presidential nomination, and his anti-Trump group, "Electors Trust," have been working to offer legal advice to members of the Electoral College who are considering voting for a candidate that did not win the popular vote in their state. The group also promises to inform interested electors of how many others are planning to flip their votes.

Lessig has a history of supporting quixotic political reform causes. He created a political action committee in 2014 to fund candidates who supported campaign finance reform, but the group found little success getting its candidates elected. In Sept. 2015, he announced his candidacy for the presidency as a “referendum candidate” hoping to implement widespread campaign finance reform. Lessig dropped his presidential bid in Nov. 2015 after he failed to earn spots at televised Democratic debates during the primaries. 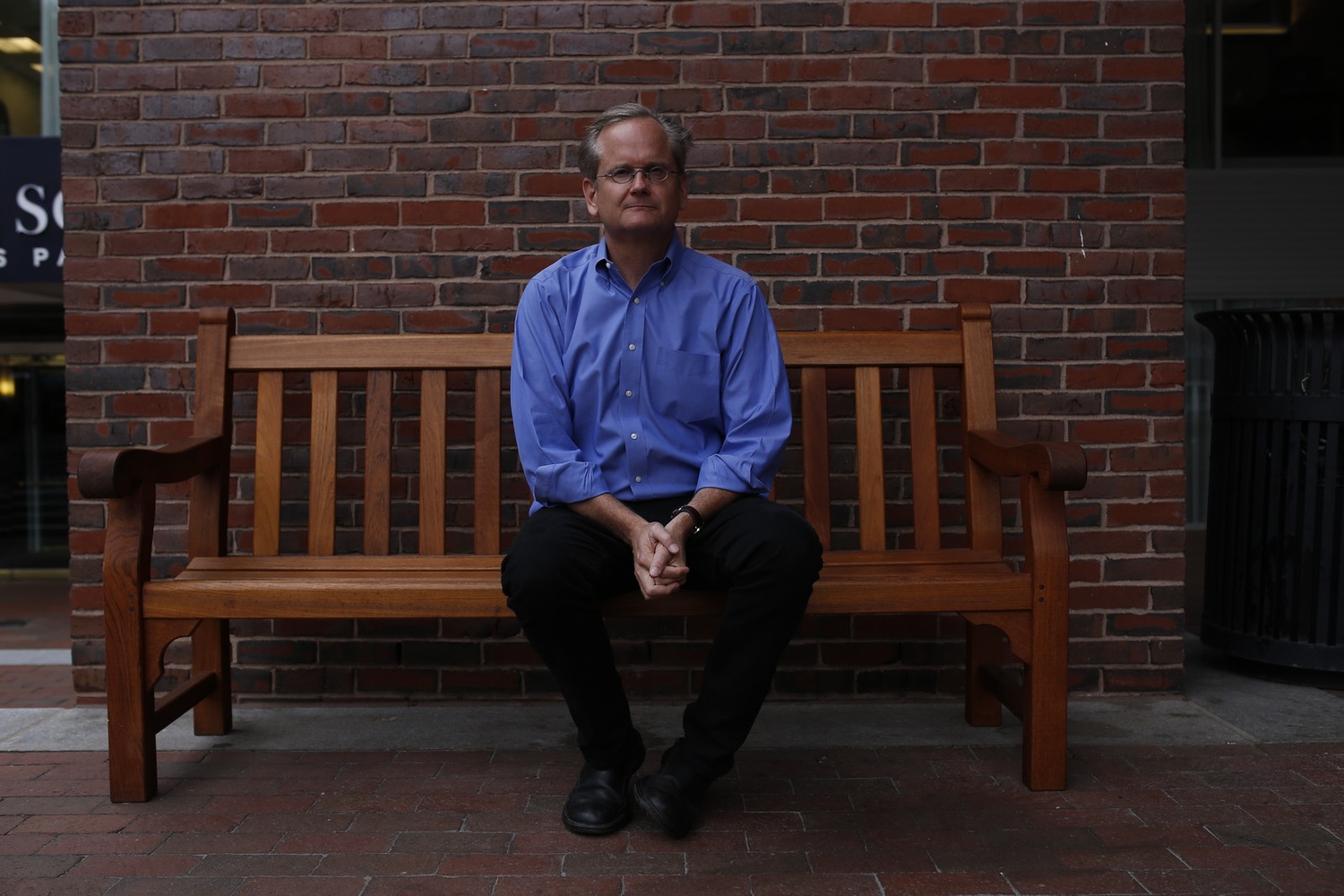 Trump, who won 306 electoral votes in the election Nov. 8, would need to lose 37 electoral votes to drop below the 270-vote threshold necessary to win the presidency. So far only one elector, Christopher Suprun of Texas, has publicly announced he will not be voting for Trump, even though the popular vote in Texas went to the Republican candidate.

Law School professor Michael J. Klarman wrote in an email that he finds it unlikely that electors will actually vote against Trump, citing the personal consequences and logistical difficulties as barriers to flipping votes.

“People are picked as electors because of their partisan reliability. The personal consequences—including death threats, I suspect, and certainly the end of their political careers—would be enormous,” Klarman wrote. “The system was intentionally designed to make it difficult to coordinate among the electors and to enforce any agreement among them.”

Government professor Theda R. Skocpol wrote in an email that she doesn’t expect red state electors would vote for anyone but Trump.

“I know of no one who thinks enough [electors] will flip to deny Trump the electors he won,” Skocpol said.

Law School professor and constitutional scholar Laurence H. Tribe ’62, along with a number of leading scholars in law and public policy, wrote a letter earlier this month encouraging electors to vote against Trump.

“This is the first time in American history that a large group of leading scholars have urged all Electors to vote against a particular presidential candidate as profoundly dangerous to our nation and our Constitution,” Tribe wrote in an email. “Maybe [Lessig] could help this unprecedented move get public attention.”

In his email, Klarman wrote that upending typical election procedures could present a threat to American democracy. On one hand, he wrote, electors flipping their votes undermines unwritten political rules that have governed our democracy for two centuries. But he also wrote that Trump’s presidency presents its own threats to American democratic values.

“I just don't think we've reached the point yet where we have to accept that democracy has failed. It is threatened in a way that it has rarely been in our history, but there is still hope for its survival, and I think the electors’ rejecting Trump would actually dampen that hope,” Klarman said. “Trump will be, and should be given the election system we have (which is a stupid system, by the way), our next president.”

The headline of this article has been updated to reflect the following correction: