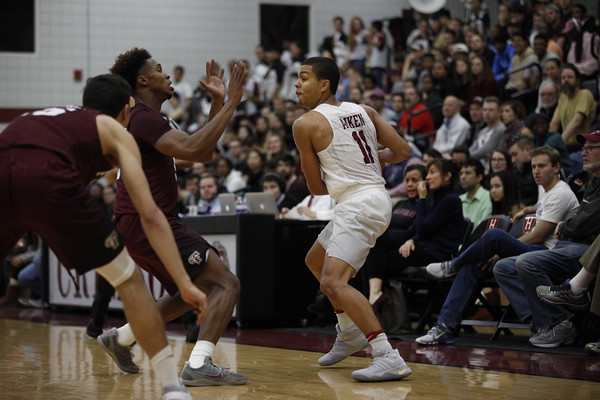 Freshman forward Bryce Aiken, shown in previous action against Fordham, leads the Crimson in scoring through its first nine games. Aiken's 21 points against Houston led the team to its biggest win of the year. By Timothy R. O'Meara
By Theresa C. Hebert, Crimson Staff Writer

Though the locations, opponents, and level of drama were very different, the rise to victory of Harvard men’s basketball over the last two games—versus Houston and Howard—were somewhat similar for one main reason. Bryce Aiken.

Against Houston, Aiken scored eight points in under two minutes as the second half ticked town to pull his team within one. After a bucket from senior center Zena Edosomwan, the team would walk away with a 57-56 victory, with Aiken ending the night with 21 points—tying a career-high.

On Friday against Howard (3-11), the rookie from New Jersey once again took charge on offense to allow his team to pull away, although this time the breakthrough would happen much earlier and more often, leading to a 67-46 victory for Harvard (6-4) over the Bison. The win extends the Crimson’s current win streak to five games.

While the game would eventually become a blowout for Harvard, the early minutes of the game showed a different story. The Crimson was unable to build a cushion as it worked to react to Howard’s speed. Harvard was making stops on defense, but had several early turnovers, many of which were passes picked off from the backcourt into the paint.

Though Harvard started the game with a 7-0 lead, the game stayed within two possessions through almost the entire first half until Aiken got hot in the waning possessions. With 1:27 to go and Harvard up three, Aiken found classmate Henry Welsh under the basket for a layup and foul, with Welsh completing the three-point play from the line.

On the Crimson’s next offensive possession, Aiken took the ball down the floor, looking like he was going to drive, but instead stepped back from his defender and hit an unassisted triple. He would close out the half with a layup to give his team a double-digit lead it would never relinquish.

“Before halftime, I feel like we really pushed the pace and gained a lead and that really helped us go into the second half, transition over,” Aiken said. “I think ever since then we were able to control the game.”

Aiken would finish the night with a career-high 23 points, including a personal-best six triples on nine attempts. He achieved the feat in only 24 minutes, whereas he has played a minimum of 30 in both of his previous 20-plus point performances.

“Bryce’s offensive ability is changing the game for us,” Amaker said. “He’s done that now for the last two games where his shot-making ability just changes it, and that’s certainly something that we needed and will continue to need.”

As Aiken spread the defense out beyond the arc as he posed a shooting threat, the inside pair of freshman Chris Lewis and Edosomwan took seriously their roles as rebounders and rim protectors in a game in which the Bison were quite mismatched in size. Edosomwan led all players with 16 boards to go with eight points, while Lewis had seven rebounds and 10 points.

The game exemplified how Edosomwan’s role on the team has shifted given the increase in scorers compared to the 2015-2016 squad. Last season, Edosomwan was charged with being the team’s offensive focal point and creating his own shots by receiving the ball in the paint or on the block and using a power dribble to evade defenders on his way to the rim. Against Howard, he utilized many more putbacks to notch his points. Overall, the Crimson had 30 points in the paint compared to just eight for Howard.

“[Edosomwan]’s role is different, and it had to be given the personnel that we had,” Amaker said. “I think he’s adjusted and adopted what we need from him which is to be a great defensive rebounder, to be a rim protector, and to be an offensive force when we need him to be whereas that was always what we asked from him last year.”

With a comfortable lead, Amaker was able to utilize his large roster to keep fresh legs on the floor, including using 12 players in the first half alone and 17 overall—which accounted for every healthy body on the bench. Three players did not dress for the contest, most notably senior co-captain Corbin Miller who is suffering from concussion symptoms.