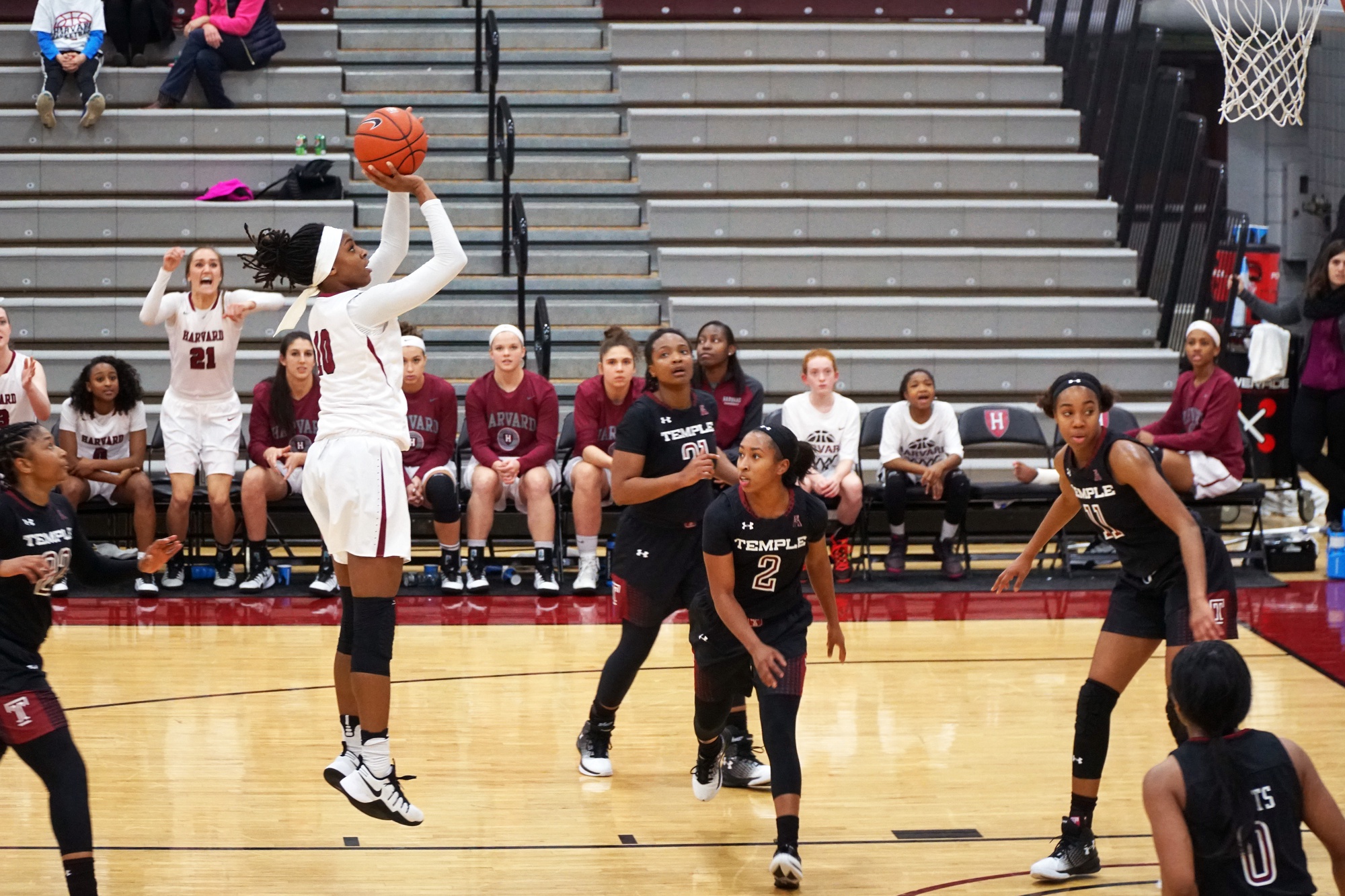 Co-captain Destiny Nunley rises for a shot inside the paint. The senior provides a strong inside presence for Harvard. By Ryosuke Takashima
By Cade Palmer, Crimson Staff Writer

Another day, another win for the Harvard women’s basketball team. Only this time the result came against a previously undefeated team and yielded a championship trophy.

In 2013, the Crimson placed second at the Fordham Holiday Classic. On Friday night, Harvard topped that performance, riding hot shooting to a 74-62 victory over Buffalo (10-1) in the Rose Hill Gymnasium in The Bronx, N.Y.

The Bulls entered the title game as the No. 3 mid-major program in all of women’s hoops, according to CollegeInsider.com. But by game’s end, the team had left the gym with its first defeat of the season.

Meanwhile Harvard (11-1) heads into conference play with an 11-game win streak and the momentum of a tournament championship—all told, the best start in recent program history.

“This win means so much to our team,” freshman forward Jeannie Boehm said. “It proves that all of our hard work has payed off. I think we're super confident going into conference play now, and we all feel very ready and excited.”

Starting the third quarter, the Crimson held a 52-45 lead. Buffalo did not throw in the towel, pulling within three with 2:13 left to play. Still, Harvard, which had overcome a pair of early deficits itself, proved staunch.

A jump shot by junior guard Taylor Rooks and a layup by sophomore guard Madeline Raster gave the Crimson breathing room. That advantage held, as Harvard iced the game and left with a 74-62 victory.

The end of the night contrasted with the beginning. Starting the game, Buffalo capitalized on two turnovers by Harvard with a quick four points and established a lead early in the matchup.

That advantage held until the last 38 seconds of the first quarter, when the Crimson mounted a five-point run. Freshman guard Katie Benzan hit a three in the final second to give Harvard its first lead of the evening, 20-17.

A similar narrative defined the second quarter. This time the Bulls held off Harvard until 2:33 remained in the half. Then a Rooks three-pointer catalyzed a 10-0 run that gave the Crimson a 35-27 lead at intermission.

“Because we have such good post players like Jeannie Boehm and Destiny Nunley, our opponents can't double-[team],” Benzan said. “And if they do double, then the kick-out is there. Jeannie and Destiny do an awesome job of reading the defense and the double to get our shooters open shots.”

Throughout the game though, the Bulls grabbed more rebounds, picking up 19 of the 24 total offensive boards and thus doubling Harvard’s second-chance points. The Crimson led in rebounds on the other side of the ball, picking up 24 defensive rebounds to Buffalo’s 18.

Boehm had a monopoly on Harvard’s blocks, notching all six of the team’s total for the game. Prior to the tournament, Boehm ranked 13th in the NCAA for blocks with an average of 2.8 per game. As a team, the Crimson placed 22nd with 5.8 rejections every contest.

For Harvard, the game came down to shooting. Again, the team shot lights-out, sinking 54.2 percent from the field compared to the Bulls’ mark of 34.8. The Crimson dominated from beyond the arc, as well, making exactly half of its attempts.

“We are successful beyond the arc because of our ball movement and because we always find the open player,” Benzan said. “We have great team chemistry where really we don't care about our individual stats. We just care about one score that's on the scoreboard.”