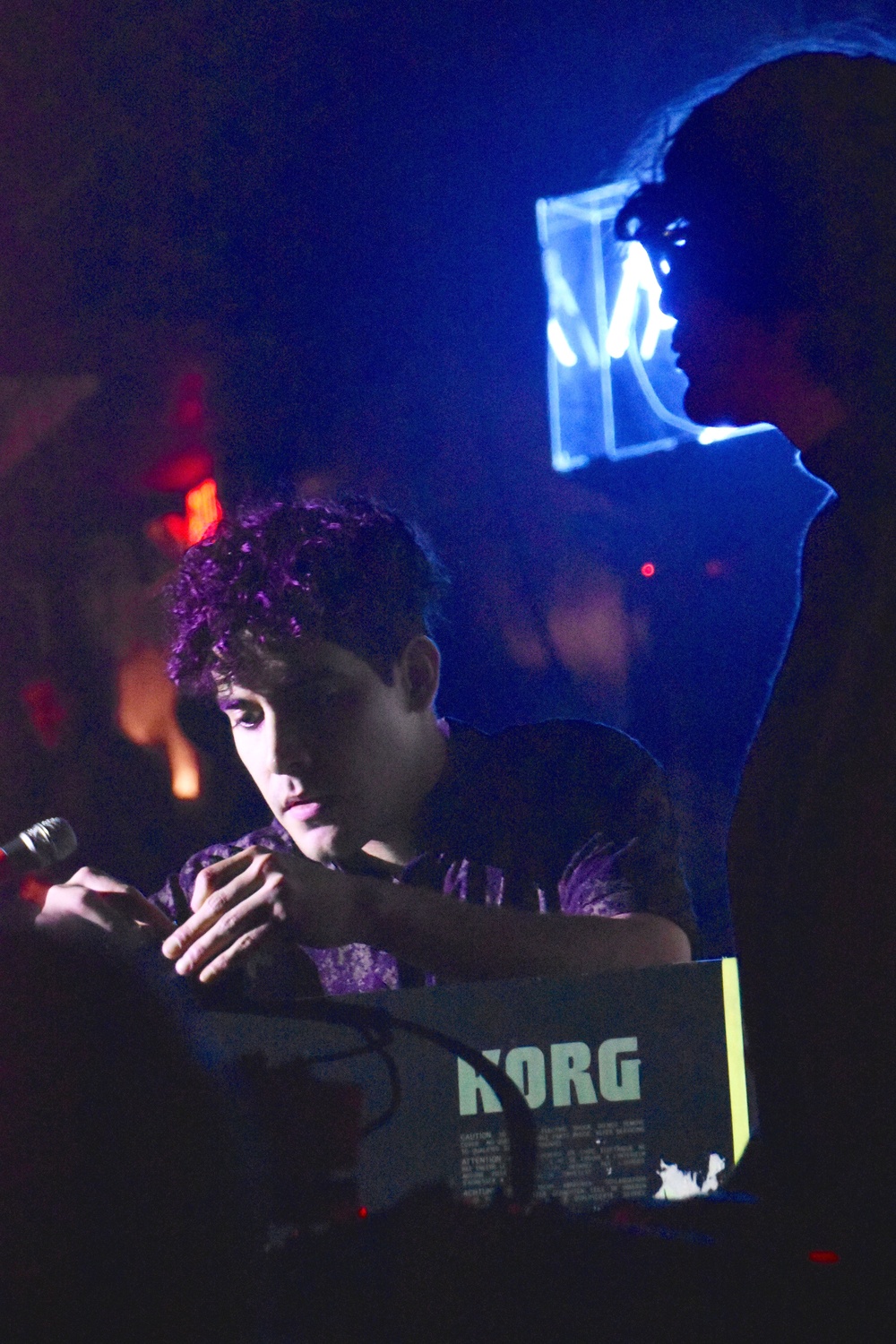 Chillwave may no longer still be with us, but Neon Indian, the once veritable king of the genre, is still at it, packing mid-size concert venues while exploring new-ish sonic territory. Neon Indian’s Jan. 28 show at the Paradise Rock Club, which sold out the BU-catering, Comm. Ave venue, featured a lively and energetic performance that did not disappoint the 900-some gathered audience members.

Neon Indian is the electronica project of Alan Palamo; when performing live, Palamo, who composes the music, is joined by a four-piece backing band, currently composed of Drew Erickson, Jason Faries, Jorge Palomo, Max Townsley. Palomo is a lively and charismatic frontman: He sings, dances, and occasionally plays synths or drums. He is well complemented by his band members, who perform tight, energetic, and muscular versions of his creations.

Palomo takes nostalgia as his subject and his method. While his three albums (2009’s “Psychic Chasms,” 2011’s “Era Extrana,” and 2015’s “Vega Intl. Night School) vary with regard to tone, content, and sound, all are involved in his overall project of refashioning the musical and sonic innovations of the early ’80s into contemporary-sounding pieces. His earlier work drew more heavily on the bleeps and bloops of early video games, sounds of his childhood that he spun into tracks chronicling the adventures of a slightly aimless “Terminally Chill” early adulthood—stoned summers, missed acid dates, and the like.

Given that the current tour is in support of Neon Indian’s new album, little material from the band’s first two LPs were played, to the seeming disappointment of some audience members, if overheard post-concert chatter is anything to go by. When earlier material was performed, however, the response was almost rapturous. For instance, as Palomo closed the set with a rendition of “Deadbeat Summer”: The closest thing to a hit song from his debut album “Psychic Chasms,” he often held the mike out pointing away from himself to capture the audience’s joyous singing along. Similarly, when Palomo and band returned for the encore—a two-song set that they opened with a performance of “Polish Girl,” the chip tune-ish lead single from their second album—the crowd responded with comparable excitement. For a moment, one could well imagine Neon Indian becoming a very different sort of nostalgia act. The strength of Palomo’s new material, however, suggests that this possibility is not a current probability.

Palomo’s latest release, the excellent “Vega Intl. Night School,” draws on high-’80s pop, disco, and Caribbean dance music, as filtered through the lens of a Carnival Fantasy Cruise. It is a more obviously adult album than his previous two, with its explicit sexuality and interest in exploring urban rather than suburban landscapes and the audience responded in kind. There was much quaffing of PBR, and from the balcony one could spy the odd plume of vapor wafting up above one head or another.

This party-like atmosphere attests to the nature of Palomo’s most recent music. While Palomo’s latest offering is certainly sexed-up compared to his first two releases, the elfin Palomo rarely performs with an overt physical sensuality. His shoulders seem to be the locus of his bodily energy and the center of his movement. When he dances, he begins by hunching over a bit and then beginning to sway these shoulders—the rest of his body following suit, especially his arms, which he swings gleefully akimbo, elbows flying proudly, defiantly out. When he is especially absorbed in a song, he lets the movement go a little further down, sometimes even into his hips, or even lower—he is prone to the odd spot of fancy footwork. His dancing is not of the stereotypically sexy variety, if you will, but rather dad dancing par excellence, as fine as anything Drake has offered up lately. It’s defiantly uncool in a way that is, of course, wonderfully cool. In this way, Palomo uses his physical presence to temper the loucheness of his new material with a goofy, comic sweetness.

This makes sense, as in many ways Palomo’s latest music can be understood as a childhood or nostalgia-inflected envisioning of adulthood and adult sexuality. The kind of seamy masculinity that Palamo performs through his new music is inherently a little sweetly silly, a little comic. In this way, Palamo seemed to have much in common with one of his set pieces—a cardboard cutout of an anthropomorphized saxophone leaned up against a brick wall, with a tongue lolling out cartoonishly. As a result, some of the most affecting moments of the evening were those in which he blended a graphic adult sexuality with a more nostalgic romantic innocence. As he sang in his final closing song, “News From the Sun”: “We're all just waiting for something,….Till love touches you like a hand in the dark.”