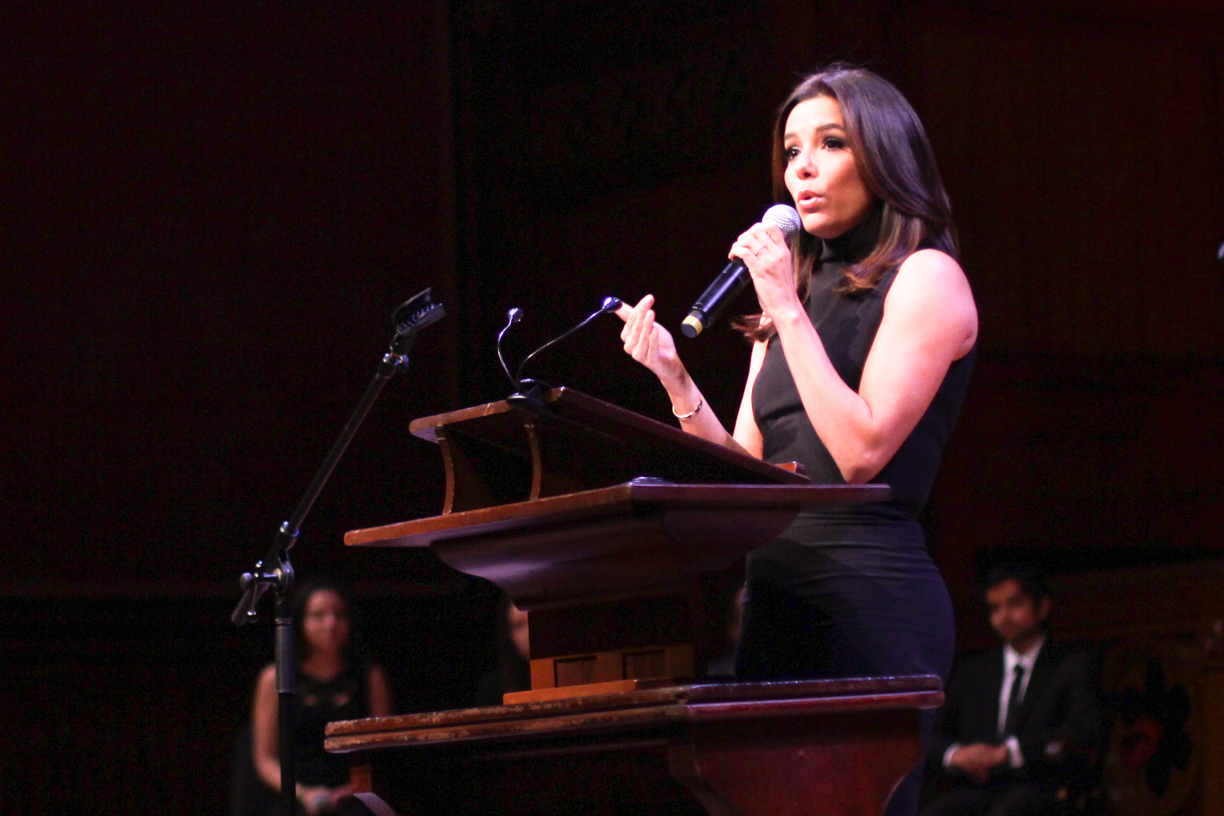 Eva Longoria speaks about the ways in which her childhood experiences motivated her philanthropic involvement. She was honored as Cultural Rhythms' Artist of the Year on Saturday evening at Sanders Theatre.
By Brittany N. Ellis, Crimson Staff Writer

The annual Cultural Rhythms Festival has expanded its programming to include a dialogue series and other events in an effort to connect the performance showcase to race-related conversations happening on campus and across the country.

For 31 years, the Harvard Foundation has organized the Cultural Rhythms Festival as a way to highlight diversity on campus. In past years, the festival has included a luncheon and performance featuring a guest speaker and a multicultural food festival.

Eva Longoria speaks about the ways in which her childhood experiences motivated her philanthropic involvement. She was honored as Cultural Rhythms' Artist of the Year in 2015. By Katherine L Borrazzo

This year, however, the Foundation organized a series of discussions throughout the week, which will culminate in a town hall meeting with Dean of the College Rakesh Khurana on Sunday. Foundation interns made the programming changes in response to recent race-related discussions and student activism on campus.

“We didn’t feel comfortable celebrating diversity without engaging in these deeper conversations or engaging with the actual issues that this term diversity and the diverse experience of Harvard students have as they’re existing on campus,” Cultural Rhythms co-organizer Avni Nahar ’17 said.

Nahar, an inactive Crimson Blog editor, is one in a team of students working at the Foundation to coordinate programming that focuses on race and intercultural relations throughout the year. Co-organizer Jonathan A. Sands ’17 said the current interns hoped to update Cultural Rhythms so that it is more relevant to students.

“It’s our mission as leaders to preserve the Harvard Foundation’s traditions and legacy of promoting intercultural and race relations at Harvard while also ensuring that we keep top of mind what the current challenges are on our campus,” he said.

The House master naming debate was a main topic of discussion of an event focused on free speech and intercultural relations on Wednesday.

The dialogue series, which kicked off Monday, has also featured a discussion on ethnic studies, an increasingly relevant topic given the recent development of curricula and working groups focused on broadening Latino and Asian American studies on campus.

Nuha Saho ’18, a coordinator for the dialogue series, said he hopes the combination of the typically popular performance with the new discussion events will attract larger and more diverse audiences.

“We thought that this week of Cultural Rhythms would for some people turn it from a superficial show into an actual, sustained and critical dialogue that we wanted to use to engage people on the campus who do not usually participate,” he said.

While interns and Khurana have previously discussed hosting more Cultural Rhythms events, this was the first year that the funds and interns were available to coordinate additional programs, according to Nahar. The Undergraduate Council’s help organizing the food festival allowed resources to go towards planning the additional events. There will also only be one show because of a decline in cultural performance groups, according to Nahar.

Remaining events include a discussion Thursday centered on race and the 2016 presidential election and an event exploring identity and performance Friday. Saturday’s Cultural Rhythms show in Sander’s Theater will feature actress Lucy Liu as the 2016 Artist of the Year, as well as many student performance groups.