Men's Hockey Falls to No. 4/4 BC in Beanpot Semifinal 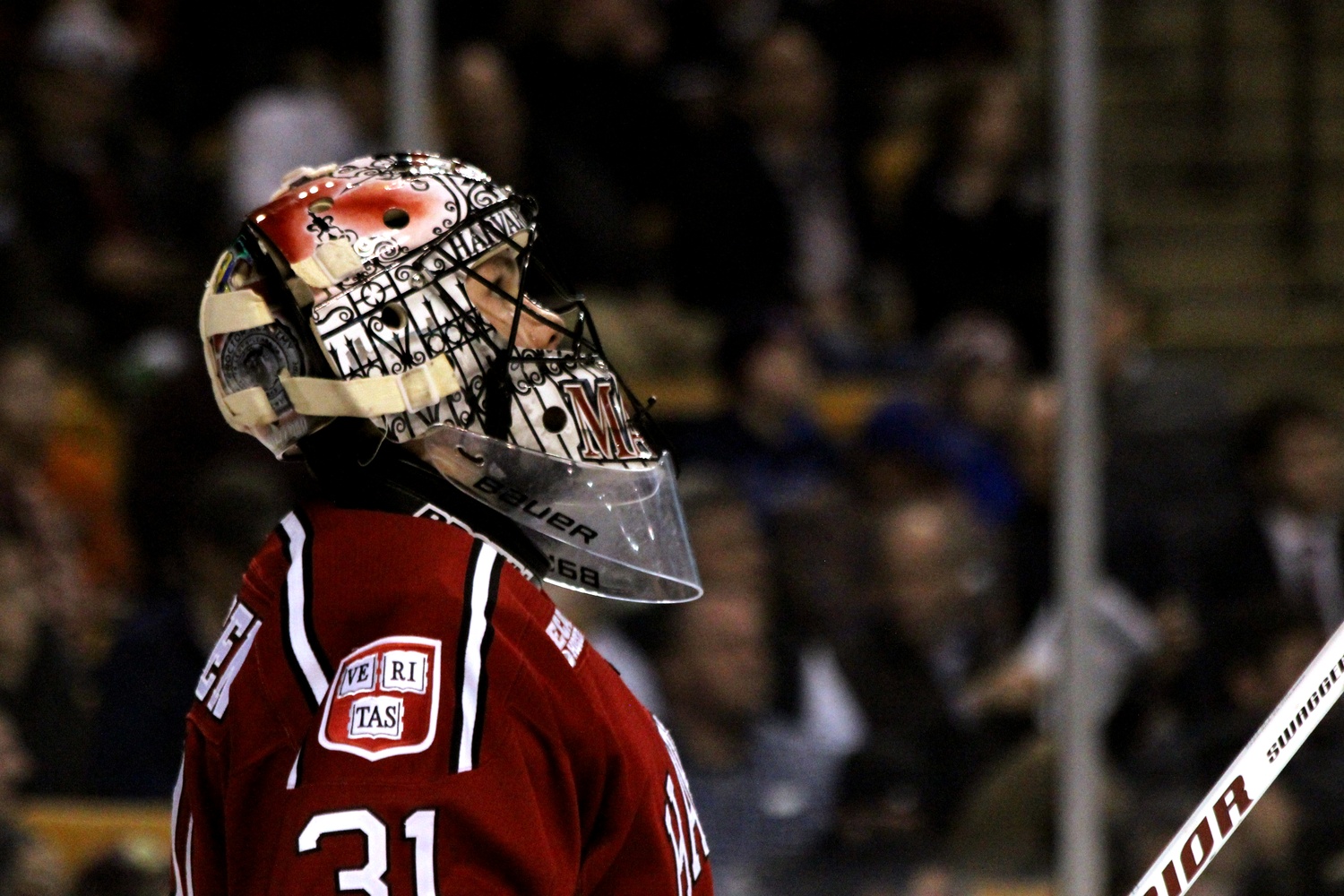 Sophomore goaltender Merrick Madsen stopped 30 of the 33 shots he faced, but it was ultimately not enough as Harvard fell to BC, 3-2, in a Beanpot semifinal. By Thomas W. Franck
By Kurt T. Bullard, Crimson Staff Writer

BOSTON–In recent years, a trip to the Beanpot final has been ever so elusive for the No. 7/7 Harvard men’s hockey team.

This February proved no different.

Two power play goals in the second period on as many chances for No. 4/4 Boston College turned a one-goal deficit into a one-goal lead, as the Eagles eventually walked away victors, 3-2. The BC win sent the Crimson home early for the eighth consecutive year and the 11th time in Harvard coach Ted Donato’s 12-year stint in Cambridge.

“We’re disappointed,” Donato said. “We’re obviously frustrated that we didn’t execute a lot of things that we needed to do to be more successful.” 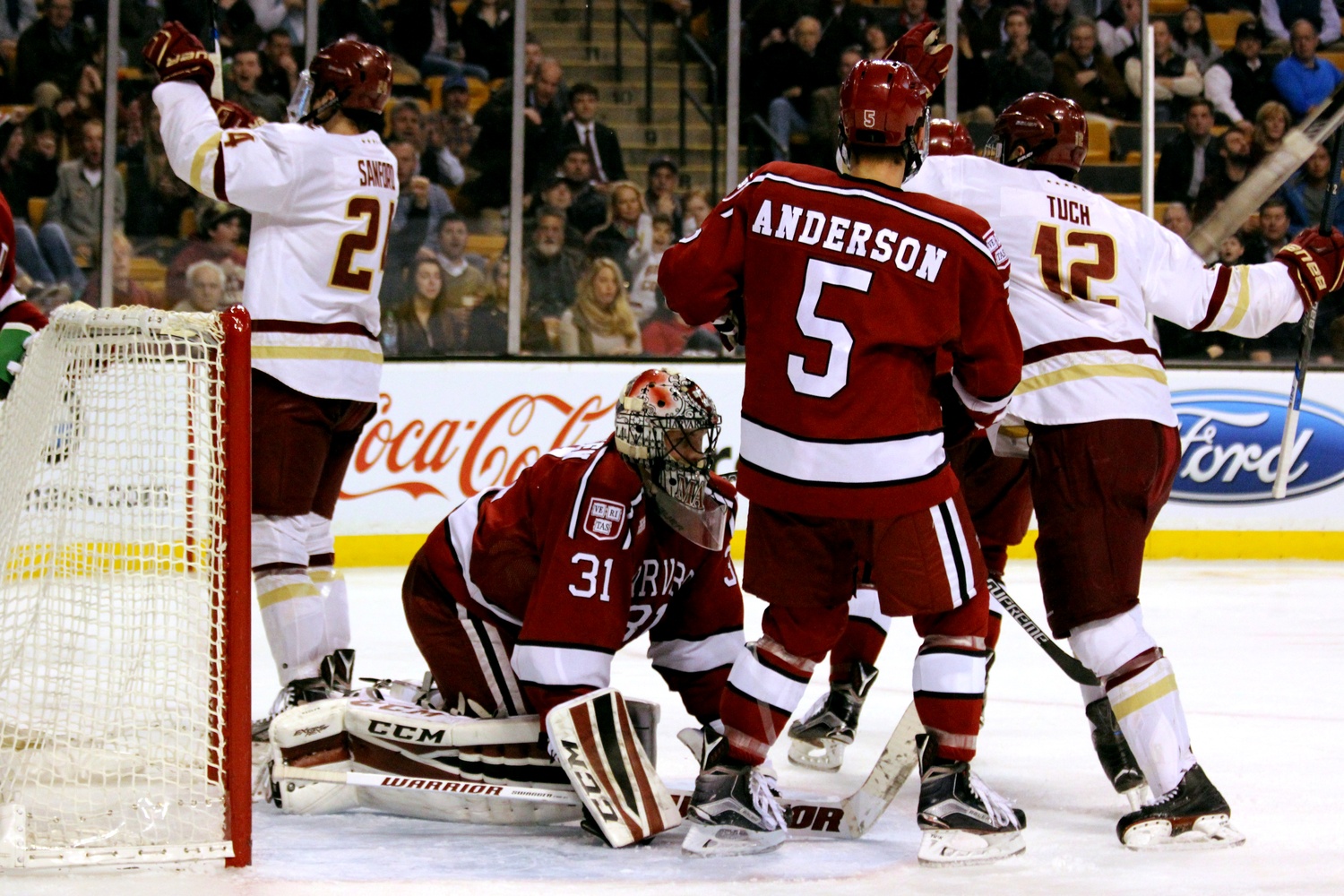 The Eagles celebrate their second goal of the night that evened the score in the second period. By Thomas W. Franck

With the Crimson (12-5-3, 8-3-3 ECAC) up 2-1 five minutes into the second frame, a tripping penalty by sophomore Jake Horton gave the Eagles (18-4-4, 10-1-4 Hockey East) their first man advantage of the contest. BC sophomore forward Zach Sanford was able to jam a puck past sophomore goaltender Merrick Madsen’s left pad to equalize the contest at two.

The go-ahead goal came less than five minutes later. Eagles freshman Colin White got the puck to Madsen’s left, just above the goal line and deked out freshman defenseman Adam Baughman with a shot fake before sending a shot off Madsen’s pads and into the back of the net. BC was able to take advantage of a Clay Anderson interference call, scoring 1:38 into the man advantage and evoking roars from the Eagles’ student section.

Harvard’s best chance to equalize came with just under seven minutes to play, when junior forward Austin Cangelosi was sent to the box for slashing. But the ECAC’s most potent power play was unable to capitalize, as Boston College killed the crucial penalty.

“We knew we were in a good spot,” co-captain Kyle Criscuolo said. “We just had to play a good third period, and we came up a little bit short.”

After a slow start, the Crimson looked to have taken control of the contest late in the first period. With the semifinal tied at one goal apiece, Baughman found himself alone at the point after the freshman, playing in just his second collegiate game, received a no-look pass from junior forward Alexander Kerfoot. The rookie waited a second and picked his spot, just as Criscuolo skated in front of junior goaltender Thatcher Demko, sent a wrister five-hole that wobbled into the net for his first collegiate goal and point.

“It’s never easy when you are a new guy and don’t get a chance to play because of your health” Donato said. “It was just [Baughman’s] second game tonight, but it was nice to see him step up and score an important goal for us.”

The go-ahead tally wasn’t without some controversy, as the offensive possession started with co-captain Jimmy Vesey getting tripped up and crashing into Demko. After review, the refs ruled that the senior didn’t touch the puck in the crease on the Baughman shot, resulting in the call standing. Vesey recorded the second assist on the goal, bumping his point streak to 10 games.

Harvard took back momentum in the latter half of the first period after the Eagles had come storming through the gates. After three great chances for BC missed, forward Ryan Fitzgerald found himself on the boards behind the goal. The junior threw a no-look, between-the-legs pass back in front of the net to the point, where his brother Casey corralled the puck and sent a slapshot towards net, beating Madsen pad-side. 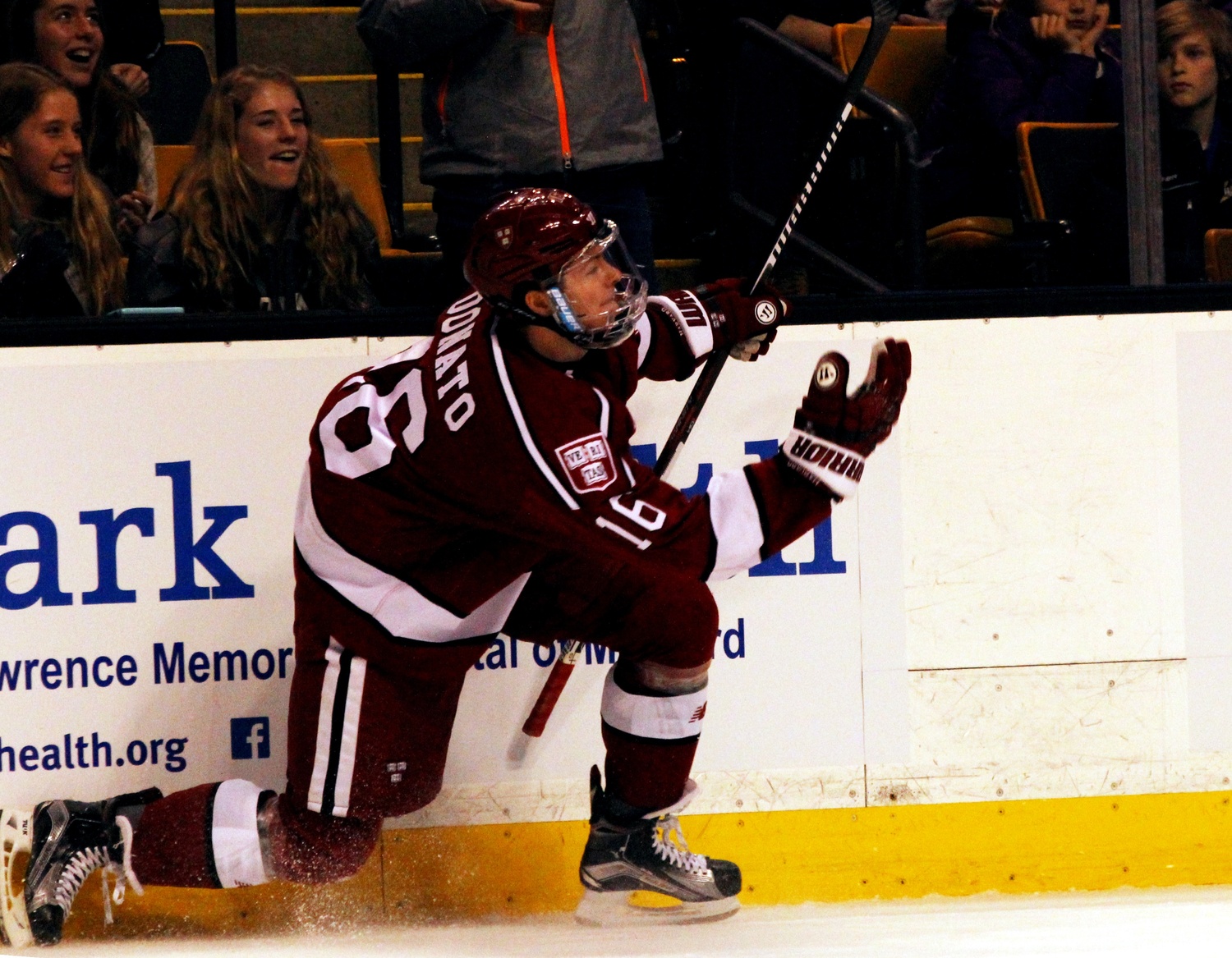 The Crimson failed to put a shot on net for the first 9:47 of the game, but capitalized when a blocked shot by junior Tyler Moy in the defensive zone sent the puck sliding towards the Eagles’ net. Freshman Ryan Donato won the race to the puck against two BC defensemen and took only a second to handle the puck before firing a wrister that beat Demko through the legs to tie the game at one.

“I didn’t really get a good chance to see the first [goal],” Boston College coach Jerry York said. “But I thought [Demko] looked solid in net for the second minutes.”

Despite allowing three goals, Madsen kept Harvard in the game, recording key saves to keep the deficit at only one for the second half of the game. With 5:20 left in the second period, Eagles’ junior forward Adam Gilmour had space in the slot, but a pad save from Madsen kept the Crimson within striking distance. The California native recorded 30 saves in the losing effort.