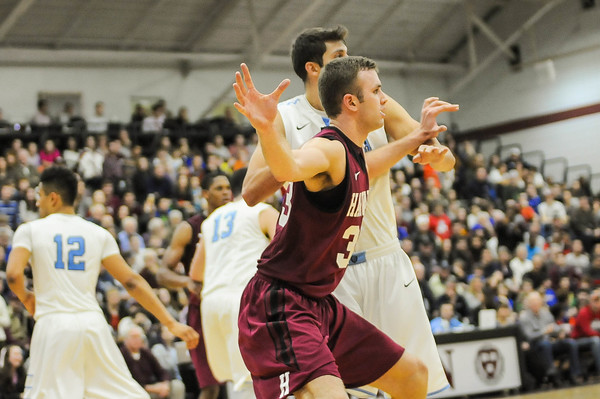 Senior captain Evan Cummins, shown in previous action, and the Crimson overcame a 21-point deficit to push past the Big Red and earn its first road Ivy win of the year. By Y. Kit Wu
By Stephen J. Gleason, Crimson Staff Writer

Freshman point guard Tommy McCarthy hit an off-balance baseline floater with 5.5 seconds to play to lift Harvard (11-15, 3-7 Ivy League) to an improbable 76-74 victory over Cornell (9-15, 2-8) on Saturday night in Ithaca, N.Y. The shot capped a 30-7 run over the last nine minutes of game action to propel the Crimson to the second-largest comeback victory of the Tommy Amaker-era.

“To be able to do that and do it on the road, that’s even more impressive,” Amaker said. “I can’t tell you how proud I am of Agunwa, Tommy McCarthy, his point guard play, his savviness, winning basket, all the plays that he made for our team. He really grew up tonight right in front of our eyes.”

It was a fitting conclusion to the evening for the Rancho Santa Fe, Calif. native, who at times looked like the only Harvard player who stood any chance of scoring on the Big Red defense. Cornell held a 67-46 lead with 9:02 left to play and it appeared as though the Crimson would be sent home from an Ivy League road trip winless for the third time this season.

Rather than subbing in reserves and calling it a night, Amaker went with a lineup of McCarthy, fellow freshman Corey Johnson, junior Zena Edosomwan, and seniors Patrick Steeves and Agunwa Okolie to give the hosts one last push.

“I thought we were very positive on the sideline, on the bench, his teammates, and certainly making a couple baskets for [McCarthy] to get his confidence flowing, then he had to go against some really good guards on their team,” Amaker said. “So I think being a competitor you know with that position, you’re certainly trying to match those guys as well.”

A cold shooting stretch by the Big Red, a rebounding clinic by Edosomwan, and a renewed energy on the offensive end got Harvard within three after a Johnson trey followed the game’s final media timeout. After consecutive stops on the defensive end sandwiching a Steeves layup, Okolie gave the Crimson its first lead of the evening with 1:59 to play.

Edosomwan pushed the lead to three with an uncontested dunk but Cornell freshman Matt Morgan, who had been a non-factor after lighting up Harvard in the first half, stymied the run with a deep three, setting the stage for the McCarthy heroics. The Big Red got the ball back with a chance to tie or take the lead but its star freshman and Ivy League-leading scorer could not get off a shot.

It was a tale of two halves on Saturday. Cornell came out of the gate on fire, making eight of its first nine three-point attempts. Morgan set the tone for the Big Red in the first frame, scoring 19 points in the game’s first 11:44. Before intermission, Cornell made eight three-pointers, shot 62.5 percent from the field, and capitalized on eight Crimson turnovers. The hosts entered the locker room holding a 46-31 edge.

The Big Red held its largest lead, 21 points, with just over nine minutes to go in the second frame.

“We just wanted to take it one play at a time,” McCarthy said. “We knew there wasn’t one, there’s not a 21-point shot so we needed to take it one possession at a time, really focus on defense, getting stops because we didn’t do enough of that in the first half.”

McCarthy led Harvard with 14 first half points but it looked like his teammates missed the bus from Columbia. The start of the second half was not pretty for either team, with the Big Red missing seven of its first 10 shots but managing to keep Harvard at arm’s length due to the Crimson’s foul trouble.

While Harvard began getting and hitting better looks on the offensive end, Cornell could not shoot itself out of the funk and continually turned the ball over. In the second half, the Big Red shot 28 percent from the field and committed nine turnovers.

While Edosomwan only chipped in 13 points, his rebounding down the stretch was one of the differences for the Crimson. The junior had five offensive rebounds on a night in which the team corralled a total of 18, compared to just 10 for Cornell.

The game was also historic in other ways for Harvard. Johnson broke Laurent Rivard’s freshman single-season three-point record, with 63 makes on the year. Okolie added 16 points and seven rebounds in what was his final trip to New York as a Crimson player.

“[Okolie]’s been unbelievable, definitely our x-factor,” McCarthy said. “It’s so good to see happen to him because he’s worked his butt off, he’s one of the best teammates I’ve ever had and he does everything for us.”