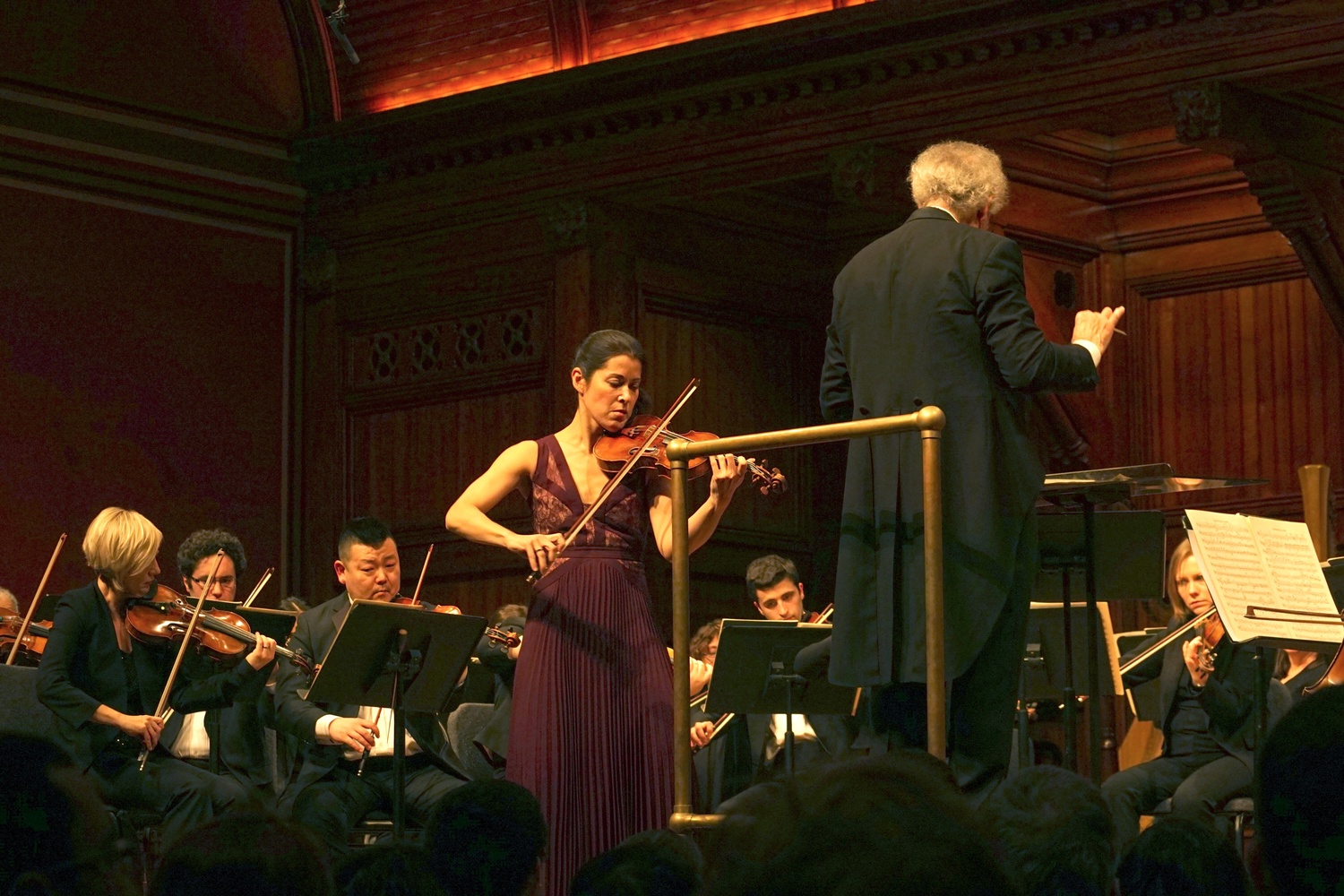 The Boston Philharmonic performed Schumann’s “Manfred Overture,” Mendelssohn’s Violin Concerto, and Elgar’s Symphony No. 1—a symphony seldom included on orchestral programs outside Britain—for a full Sanders Theatre on Thursday night. Conducted by Benjamin Zander and featuring violinist Jennifer Frautschi, the orchestra offered its audience a mix of well-loved and lesser-known selections from the classical repertoire.

Before each piece Zander offered his own interpretation of the music, illustrated by measures played by the orchestra. “It’s like when you go to an art museum and you can get a recorded guide—someone talking in your ear and telling you about the paintings,” he said of the combination of lecture and performance. Before the Elgar, for instance, he urged the audience to listen closely for subtle patterns and repetitions. “Wait for the moment when the theme returns, hidden on the back-desk violins,” he said. In the short talks, he offered his own conception of each piece’s narrative but urged listeners to be attentive to the ways in which their own bodies and emotions responded to the sound.

Zander described Schumann’s “Manfred Overture,” which premiered in 1852, as a perfect representative of the Romantic movement in music. “We are thrown into a world of urgency, despair, tension, and passion,” he said. He drew the audience’s attention to the bodies of the musicians, to the agitation with which Schumann’s composition asks them to move. “[Schumann] created a world of extreme darkness,” Zander said. “The music seems to writhe with sorrow.” From the violence of the opening three chords to the melancholy wandering of the strings in the middle section, from the bewildered sadness of the winds to the ominous thrilling of the double basses, the orchestra gave voice to the piece’s turmoil.

With its instantly recognizable opening notes on the solo violin—evocative of both pure grief and absolute tenderness—Mendelssohn’s 1844 concerto remains one of the most widely performed of the classical repertoire. Soloist Jennifer Frautschi ’95, a graduate of both Harvard and the New England Conservatory, received a standing ovation for her rendition of the work. As she bowed to the audience, two hairs scraped off by her vigorous playing hung from the end of her bow, just visible in the air illuminated by the stage lights.

In contrast to the enduring popularity of Mendelssohn’s work, Elgar’s Symphony No. 1, though acclaimed at its premiere in England in 1908, has received only seven performances in Boston since its debut in the city in 1909. “In building this program I started from the Elgar,” Zander said. “It’s a beautiful piece, a powerful piece. It’s asking the big questions: ‘Why are we here? Where are we going?’ There’s a sense of profound struggle, and in the end Elgar gives us triumph and hope, but it’s a success that’s achieved against tremendous odds.”

Zander said that for him, the heart of the symphony is its third movement, the adagio, in which an idyllic, lilting tune emerges on the first violin and seems to lull the other instruments to sleep. “I don’t want to say anything about it. I want to let it speak for itself, let it reach into your soul,” he said before the performance.

Zander explained that he chose the other two pieces for the way in which they framed the Elgar. “Schumann...was Elgar’s favorite composer, the composer he felt closest to. So that made sense,” he said. “The Mendelssohn is the bait to get people in the door. Everyone loves that piece—and of course they do. It’s a beautiful work, a perfect work.”

He added that he sees the three composers as both musically and biographically connected. “Schumann is really looking forward, Mendelssohn is looking backward, and Elgar is looking both backward and forward. Schumann is the leader of the new Romantic movement, and then Mendelssohn is drawing on Bach, on his predecessors,” he said. “Elgar is drawing on that Romantic tradition, but he’s also very modern. And like so many Romantics, he was an outsider. As a Catholic in the England of that time was never completely ‘one of the boys’. He was even left out of an anthology of important English composers published during his lifetime.”

The Boston Philharmonic will perform the program again on Sunday, Feb. 21, in Sanders Theatre.