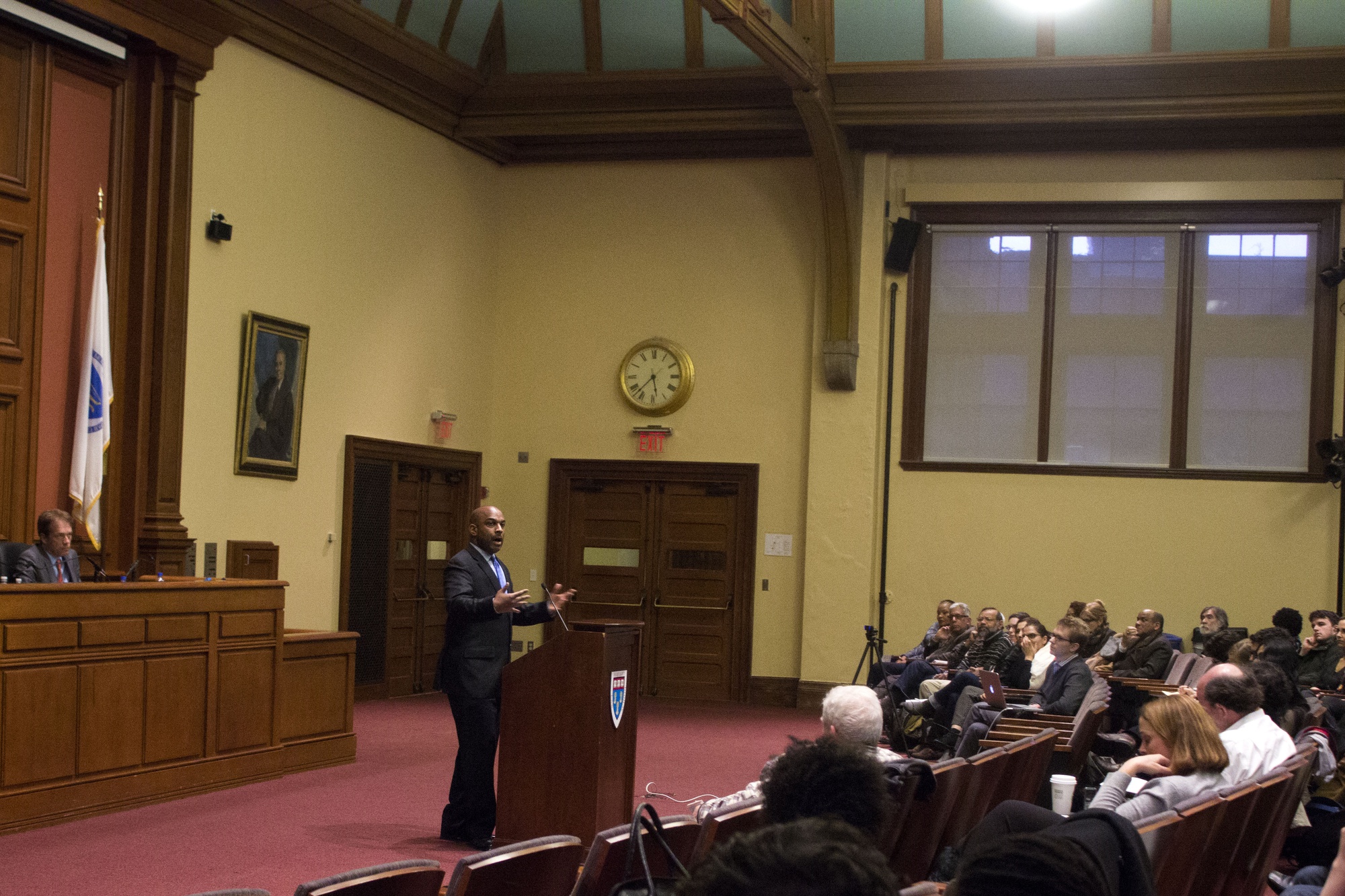 Kenneth W. Mack, a professor at Harvard Law School, speaks about reparations and the way that entities such as HLS can look at the fact that they would not be as successful without slave labor. The event was a joint seminar featuring Sir Hilary Beckles and Harvard professors.
By Ahilya Khadka, Crimson Staff Writer

At a time when Harvard finds itself debating the ways controversial history is remembered on campus, Caribbean historian Hilary M. Beckles told a Harvard Law School audience the best way to deal with a thorny past is confronting it head on. 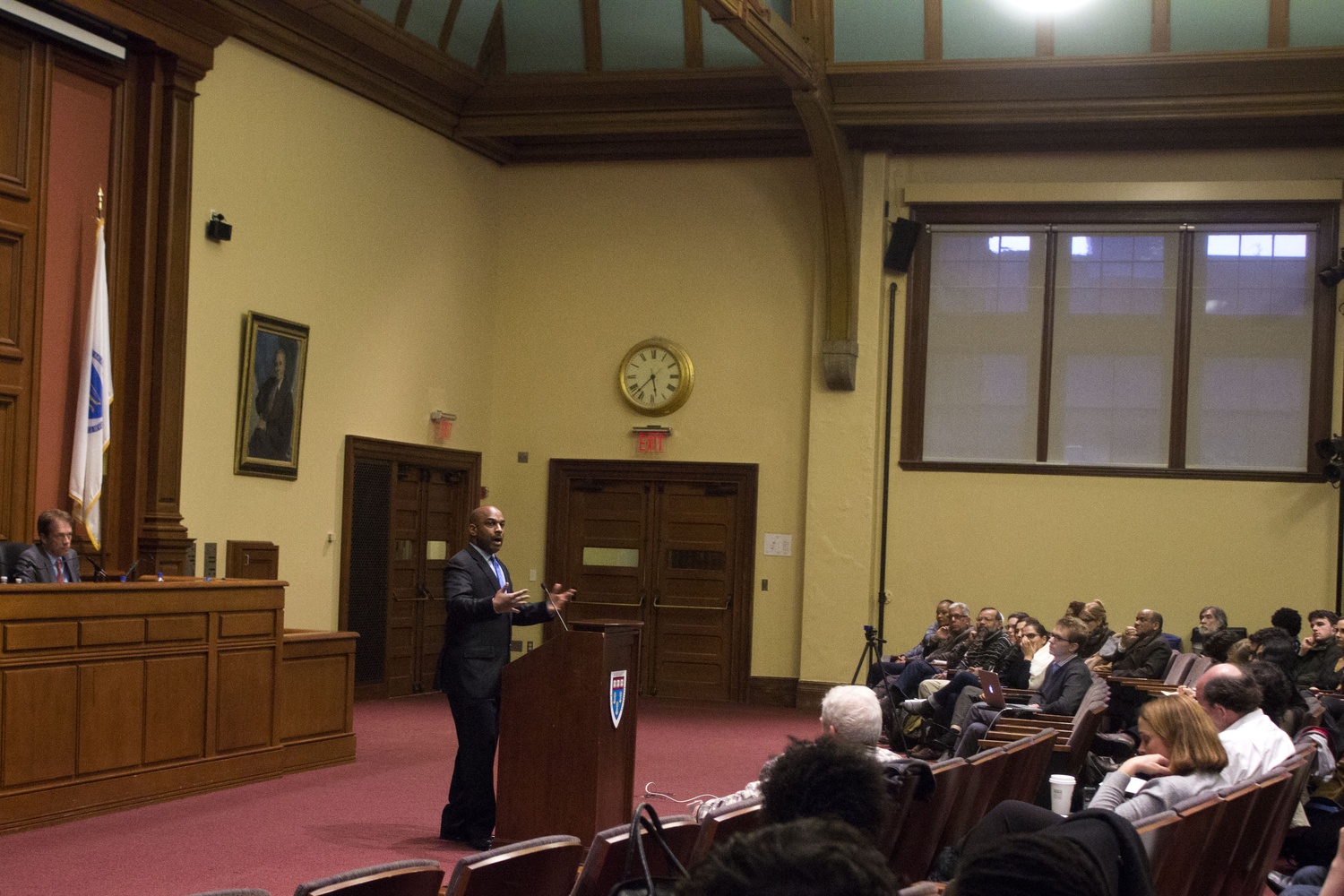 Kenneth W. Mack, a professor at Harvard Law School, speaks about reparations and the way that entities such as HLS can look at the fact that they would not be as successful without slave labor. The event was a joint seminar featuring Sir Hilary Beckles and Harvard professors. By Savannah I. Whaley

“There’s no point in burying the legacy and memories,” Beckles said. “Let us bring everything to the surface and find a way forward through all of this.”

Beckles was the keynote speaker at a panel discussion on reparatory justice for Caribbean countries that facilitated the slave trade, and was joined by other Harvard professors on the panel in the Law School’s Ames courtroom.

The Caribbean played an integral role in the international slave trade during the 18th and 19th centuries, and Beckles said “the West will be on trial” until it amends for the role its former colonies played in facilitating slavery.

As chairman of the Caribbean Community Reparations Committee, founded by Caribbean national governments in 2013 to establish a case for reparations to nations in the region, Beckles referenced a 10-point plan he has developed alongside a commission of inquiry to best “formulate a strategy for reparative justice to move the society forward.”

“Reparative justice is not about black people standing on the street corners expecting charities from white folks,” Beckles said. “This is about building of bridges across lines of moral justice.”

He called on Western world leaders to atone for their countries’ wrongdoing by investing in housing, education, healthcare, social justice, and infrastructure development in the Caribbean countries.

Specifically, Beckles urged United States President Barack Obama to use his global influence to push the world towards increased reparative justice. He added that he hoped the next time he is invited to the Law School, it would be for the opening ceremony of an “Obama Center for Reparative Justice.”

As of Monday, Law School activists were a week into their occupation of the Caspersen Student Center lounge as they called for increased resources devoted to minority students and a change in the school’s seal, which was adopted from the slaveholding Royall family's crest.

While he did not delve deeply into the current protests at the Law School, Beckles encouraged young people to ensure they are learning in ethical environments.

Alexander J. Clayborne, a third-year Law School student who has helped organize protests, attended the event and said he found the talk “powerful,” especially as it pertained to both global and current events at Harvard.

“This is not just a story from long time ago, but a story that is very local and very much about this University as well,” Beckert said.