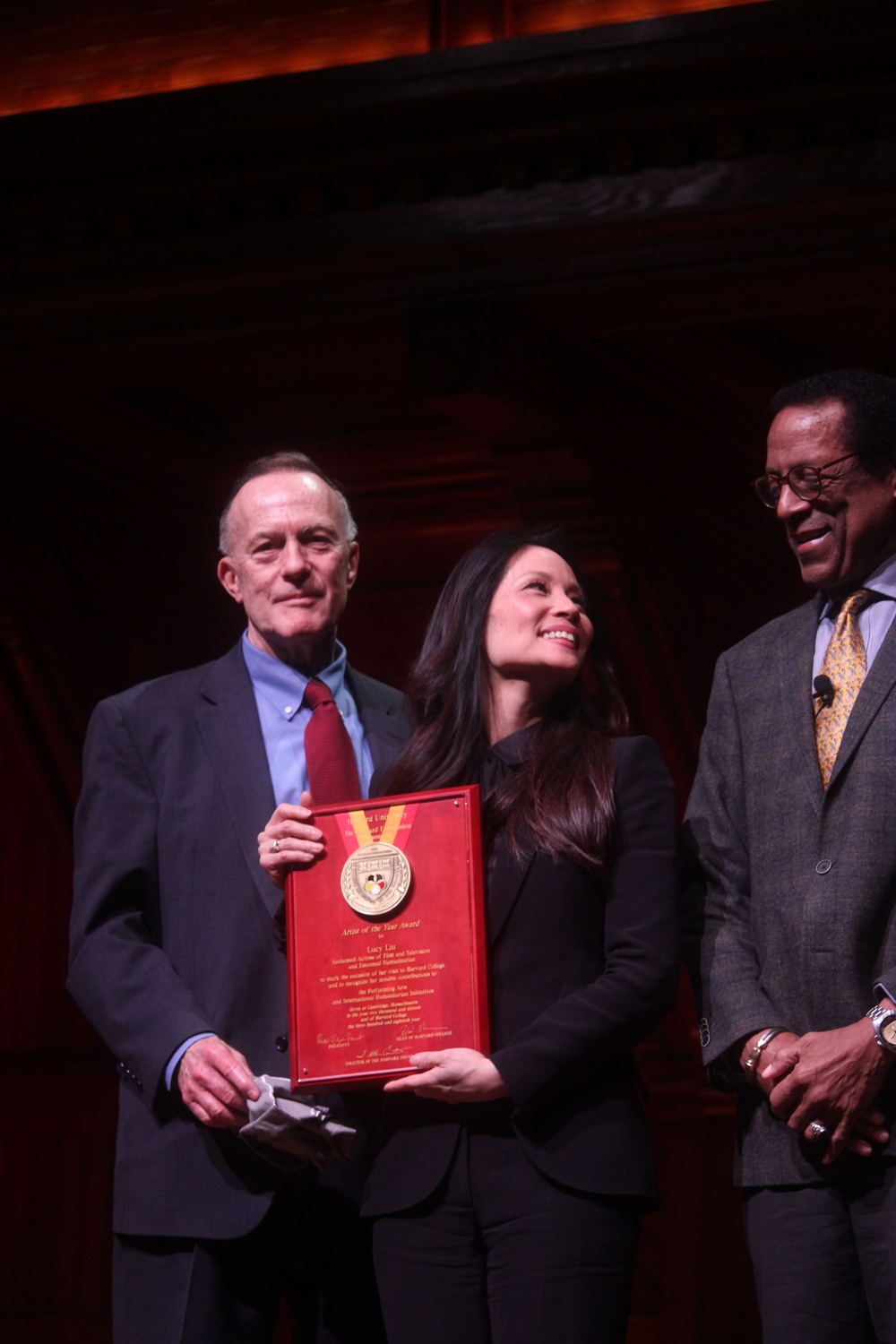 Actress and activist Lucy Liu was named the 2016 Harvard Foundation’s Artist of the Year during Cultural Rhythms. By Lauren A. Sierra
By Grace Z. Li, Crimson Staff Writer

“Diversity is about unity,” Lucy Liu said at Sanders Theater on Saturday night, “Separation and segregation—that’s about fear and ignorance.” Liu, a UNICEF ambassador and former “Charlie’s Angels” actress, was named Harvard University's 2016 Artist of the Year at the Harvard Foundation’s 31st Cultural Rhythms show, where she spoke about diversity and acceptance. “It is our job to present who we are, and stand up for it.”

Liu, a long-time advocate for gender equality and opponent of human trafficking, was greeted by a prolonged ovation as she received her plaque and a Harvard sweatshirt. “We always look at a number of people—usually artists of color or minority backgrounds who have made some amazing accomplishments in the arts but who have also done some incredible work in philanthropy,” says Cultural Rhythms co-director Avni Nahar ’17, who is also a former blog exec of the Crimson. “Lucy Liu fits that bill.”

Liu’s message was complemented by an eclectic array of performances by student groups. Harvard’s The Kuumba Singers, a choir dedicated to celebrating black identity, kicked off the show with a song about love, peace, and unity. The Harvard Philippine Forum followed later with a traditional dance of rural farmers in the Northern Philippines, jumping over and around stacked benches with partners in hand. Harvard Taekwondo mixed traditional martial arts with contemporary fight scenes, breaking boards and cartwheeling over each other to Ariana Grande’s “Problem.” The Asian American Dance Troupe finished off the show with their performance, “Memoir of the Fallen Warrior,” as they formed a human mountain for one dancer to roll down on.

In between performances, Liu led short talks with performers to learn about the cultural or personal significance behind the shows. Sitting in a green wooden chair on the side of the stage, she asked about the students’ own experiences with the arts, as well as the history or cultural significance behind certain dances or musical instruments. In one of these talks, Liu was surprised to find a number of Asian members in Mariachi Veritas, which plays Mexican folk music. Some members of Mariachi Veritas did not speak Spanish, but could sing the songs in the language.

This turned out to be a common situation in the evening: several other groups also featured performers of different ethnicities, even though they were closely related to a specific culture. “There are so many people on the team that are not Indian or that are not even familiar with the dance and its history,” says Sapna V. Rampersaud ’19, a member of Harvard Bhangra, a group whose performances combine Punjabi traditional dance with Western forms. “That’s what means a lot to me—there are so many people that are so interested in it.”

“We were all kind of sharing in this one experience of celebrating our unique cultures and also the coming together of these unique cultures,” Harvard Bhangra member Anjali Chandra ’19 says, echoing Liu’s previous statements. “It was really special.”

“I hope students will have a greater understanding of the diversity that exists here at Harvard. I know we talk about diversity a lot, but I think it’s different when you actually see your classmates perform a piece of their heritage that’s so integral to them and learn a little bit about what that means,” said Nahar. “I think diversity means a lot of different things, but I think inherently it just recognizes the fact that we are all different in different ways and different aspects of our identity. That doesn’t mean that there isn’t commonality there. It’s learning to both appreciate those differences and find their similarities.”

—Staff Writer Grace Z. Li can be reached at grace.li@thecrimson.com.