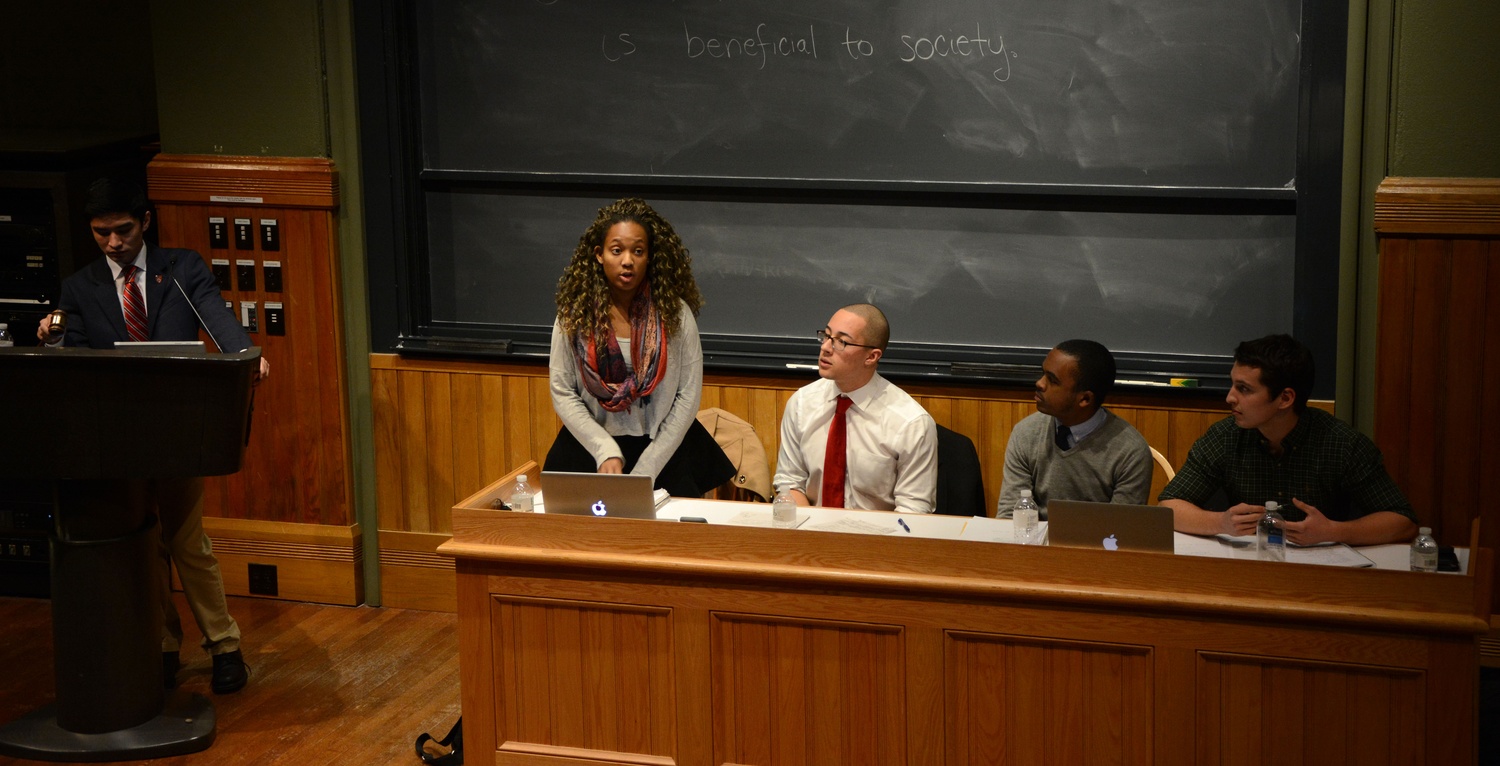 In a debate hosted by the Harvard Political Union, Simone Abegunrin ’18 stands to give a qualification in support of political correctness. “Political correctness is a new concept, and with new concepts come growing pains and mistakes along the way.” By Isabel G. Alexander
By Derek G. Xiao, Crimson Staff Writer

In light of a contentious year on college campuses across the nation, a crowd of a hundred students gathered Tuesday evening to watch four of their peers debate the merits and pitfalls of political correctness and “PC culture.”

The debaters—Michael P. Richard ’17 and Simone E. A. Abegunrin ’18 for the affirmative, and Mack Andrews ’18 and Jordan A. Alston-Harmon ’17 for the opposition—sparred over recent issues ranging from student demonstrations against perceived racism at Yale and the University of Missouri at Columbia to controversy at Harvard over the use of House masters’ title and social justice placemats distributed by the Office of Student Life.

At the center of the debate was a concern for fostering free discourse. “The beauty of political correctness is that it provides the equity for marginalized groups to be able to advocate for themselves and challenge those who maybe have not realized what goes on in their lives and do not give them equity,” Richard argued.

The opposition, however, argued that political correctness does not establish a better environment for open conversation.

“There are some justified instances of PC culture, but as we’ve seen, there are also times when PC culture vastly oversteps its bounds,” Andrews said, holding up a copy of the controversial placemat that college administrators later apologized for. “What this placemat said is ‘Here’s what you’re supposed to believe, anyone who disagrees with you is wrong. This is the stance of Harvard, and you should take it like the word of God.’”

Both sides agreed with college administrators decision last semester to drop the title House Master, one some have associated with slavery. Since that time, College leaders have yet to reveal alternative nomenclature.

Many audience members took aim at the foundation of the debate: several specifically said they were frustrated by the lack of a consensus for the term “political correctness” itself.

“I feel like there was a bit of an unclear definition,” Akshat Agrawal ’18 said. “Both sides twisted the definition a little bit, had their own type of ideas. I feel like it would’ve been better if at the beginning they arrived upon an agreed upon definition of political correctness.”

The opposition seized on the ambiguity to argue for what they said was the exclusivity of political correctness. “I’m not an English major, but it has the word ‘correct’ in it, and to me that presupposes that there is some type of view that is correct, and there is some opposing view that is incorrect,” Andrews said.

In response, the affirmative offered an analogy to bolster their argument for the efficacy of political correctness. Political correctness, just as the term “personal computer,” have the same acronym, Abegunrin said. “A PC, like an actual computer … improves communication. It enhances sharing of knowledge. It makes everything easier, faster, and more effective—ideally.”

“But it’s not going to start out that way. The first computer was massive, was slow, didn’t have much data, it was actually harder to use a computer than to write a letter to someone. But upgrades were made. Different models were made. But in the end, PC is a pathway to more progress. It’s not an endpoint.”

The debate was the second installment of a two-part series called “The Politics of Race: Can We Talk?” hosted by the Harvard Political Union.