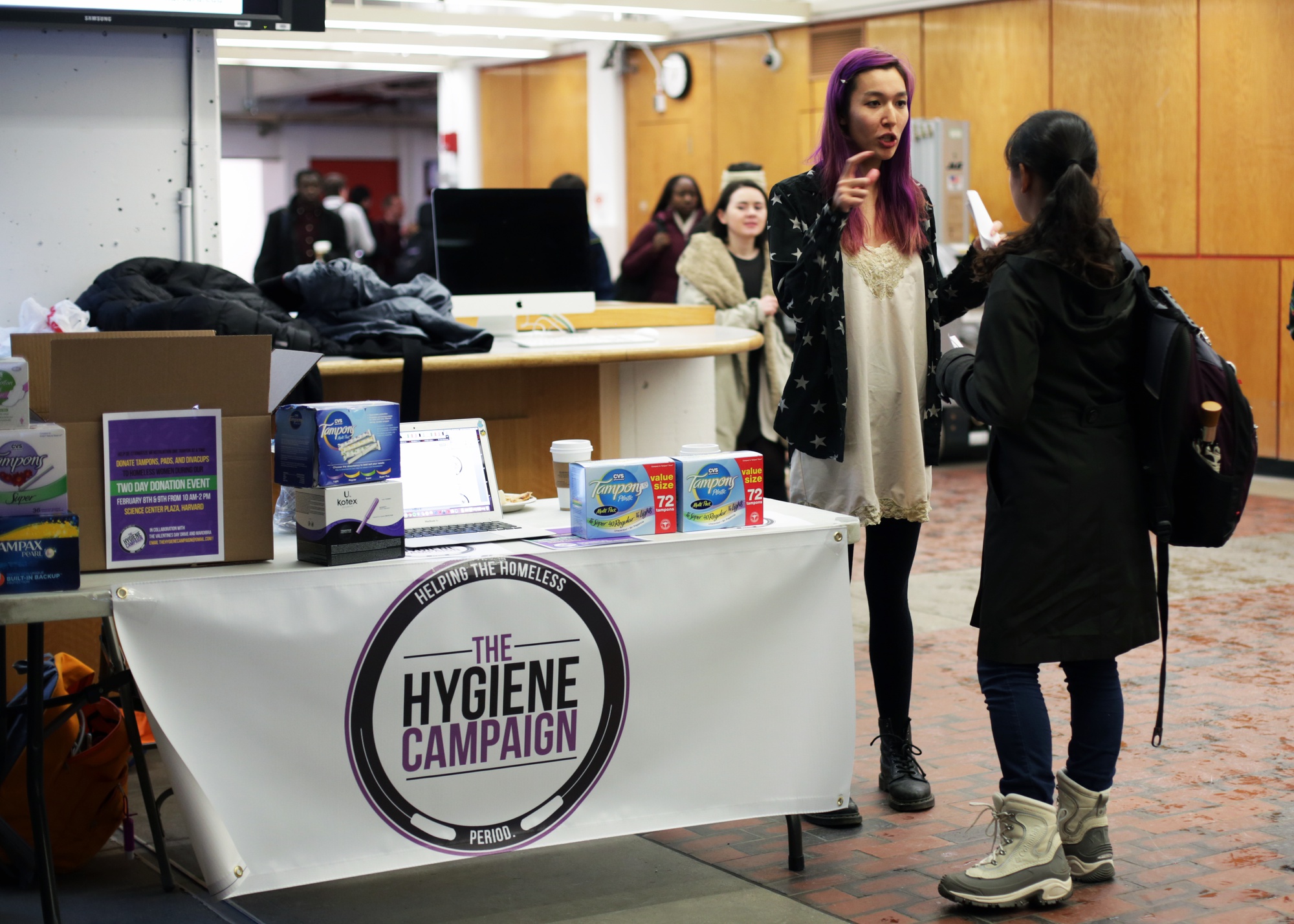 Eudora L. Olsen ’17, founder of the Hygiene Campaign at a donation event in Science Center. Her group is dedicated to donating feminine products to homeless women and changing the conversation about menstruation.
By Jessica Min and Kier W. Zimmerman, Crimson Staff Writers

Instead of the usual Mardi Gras beads, an undergraduate-led group is holding a two-day Mardi Gras drive in the Science Center plaza for female hygiene products to donate to local homeless shelters.

Eudora L. Olsen ’17 founded The Hygiene Campaign, a nonprofit that aims to provide feminine hygiene products to homeless women and make the topic of menstruation less taboo. Mardi Bra, a part of a larger non-profit organization, currently acts as a mentor to The Hygiene Campaign and the two are working together to run the drive.

The drive, which specifically seeks tampons, pads, and diva cups, is being held over Monday and Tuesday. 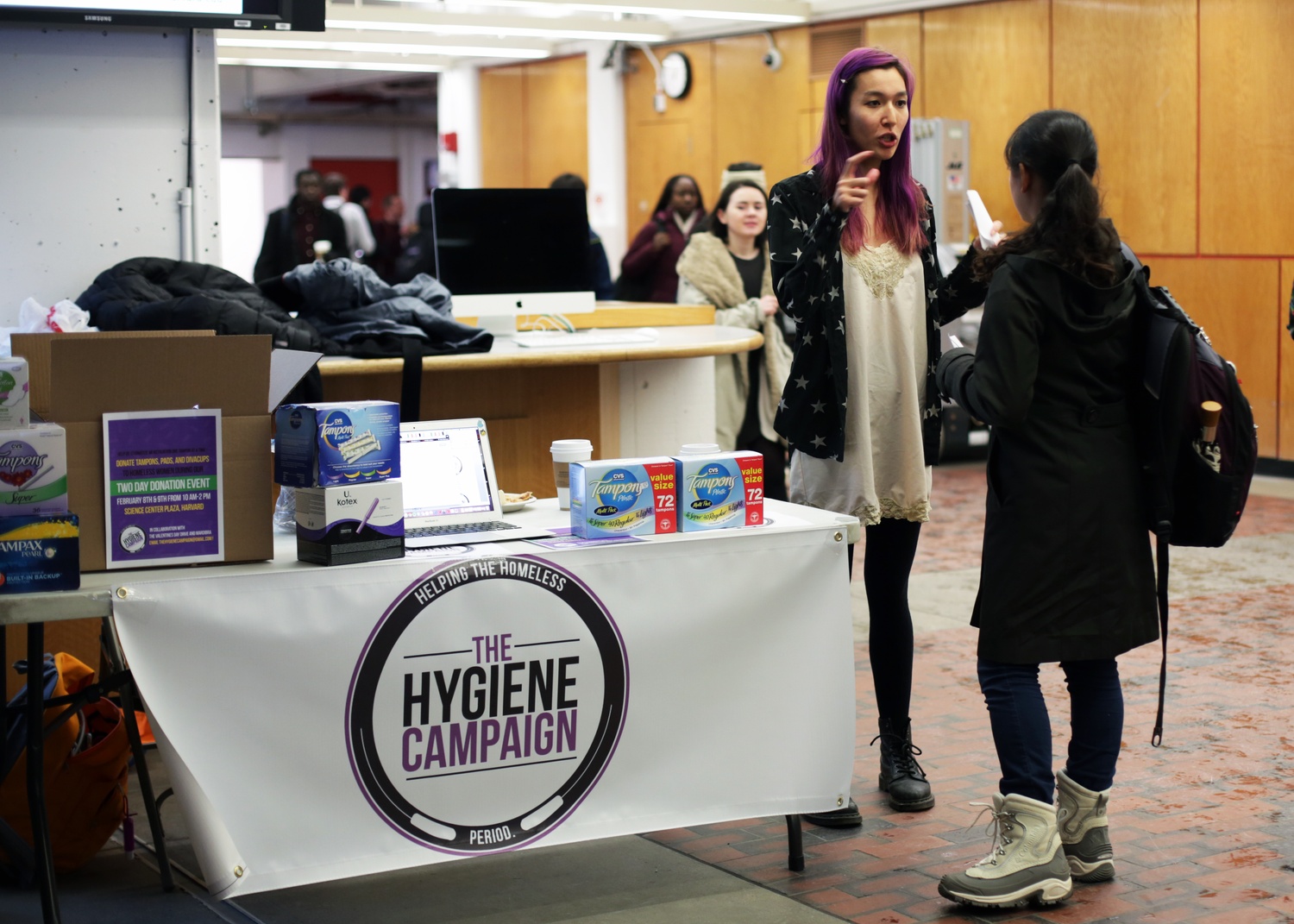 Eudora L. Olsen ’17, founder of the Hygiene Campaign at a donation event in Science Center. Her group is dedicated to donating feminine products to homeless women and changing the conversation about menstruation. By Fankai Liu

“The goal is to get women into the habit of buying an extra box when she goes and buys [feminine products] for herself," said Jessie Plotkin, a spokesperson of Mardi Bra.

Olsen said there is lack of feminine hygiene product donations to homeless shelters serving women, and said she believes that gap arises from the absence of conversations surrounding women’s health and menstruation.

“I want to open up a conversation about menstruation, which I think a lot of people, including myself, aren’t completely comfortable with,” Olsen said. “It’s just not a topic that’s talked about.”

The campaign also seeks to highlight the barriers many women face purchasing feminine products, particularly due to luxury taxes on the items in some states.

“A lot of people don’t know about luxury taxes on feminine products, which make them extra inaccessible to women who simply can’t afford the $7 box of whatever they need to live their lives,” Olsen said.

Cambridge resident Manny E. Lusardi, who attended the drive, said the issue of hygiene for homeless women was not just a “women’s issue,” but should be part of a larger societal conversation.

“I think it’s a mistake to just think it’s gendered,” he said. “Men have daughters, have wives, have mothers, so I am willing to help.”

Katie L. Blanton ’18, who participated in the donation drive, said the event is an important chance to “try to make sure we are being active in the community.”

Cambridge City Councilor Jan Devereux volunteered at the event and also cited the importance of Harvard involvement in the community as a whole.

“It's great to see students get involved with issues that are not directly on campus, because we need Harvard students and all university students to be involved in civic issues as well,” she said.

The Mardi Gras donation event is a part of nationwide drive across 15 cities hosting collections for feminine hygiene products to donate to homeless shelters, according to Plotkin.

“Periods are not an epidemic that will end. It’s a part of every woman’s life and it’s not being talked about. The people who hurt the most from it are the people who already don’t have voices,” she said.