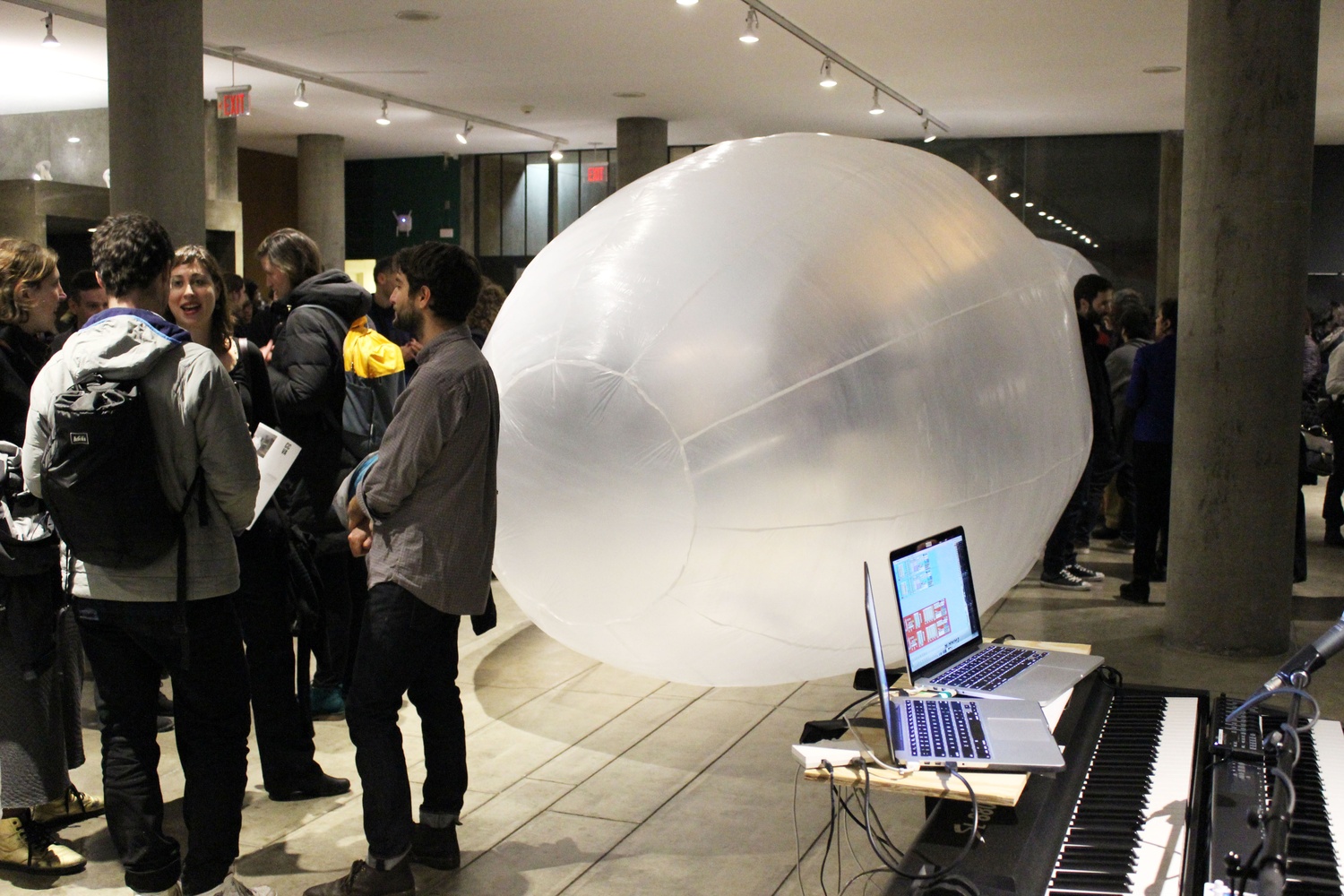 “Pneuma(tic) Bodies,” an installation which focused upon the relationality between the human body, objects, and architecture, opened at the Carpenter Center on Wednesday evening. By Thomas W. Franck
By Rebecca H. Dolan, Crimson Staff Writer

In the latest contemporary installation at the Carpenter Center for the Visual Arts, “Pneuma(tic) Bodies,” viewers themselves become part of the works on display when they walk through the door. The lobby of the Carpenter Center now contains three large plastic balloon-like structures, continuously ventilated by tiny air-cooling systems. The sculptures are aerated so delicately that anyone passing by can alter their shape just by their breath or the currents of air displaced by their movements through space. In this way, viewers make bodily contact with the artworks using their eyes, lungs, and limbs.

“Pneuma(tic) Bodies” was brought to Harvard by C. Alexander Häusler, a practicing architect who studied at Harvard, and Silvia Benedito, assistant professor of landscape architecture at Harvard’s Graduate School of Design. “They are this really interesting breed, because they’re both makers,” Daisy K. Nam, Assistant Director at the Carpenter Center, says. “They make, as we see here, sculptures and drawings. But they are working architects too, so they also build.”

With their architectural backgrounds, Häusler and Benedito were mindful of the interactive sculptures’ relationship with modernist architect Le Corbusier’s design for the Carpenter Center, completed in 1963. “They, as architects, know the space so well and have studied Le Corbusier really closely, so it’s also a play in this specific site. They really install[ed] the work lending to the space,” Nam says.

A series of large-scale abstract drawings, made by Häusler and Benedito in conjunction with the sculptures, lines the walls of the lobby. According to Nam, these flat works are as interactive as the globular bodies. The paint was applied to the canvases at various speeds, pressures, and length of drying time to create three-dimensional contouring effects. The viewer’s perceptions of the pieces change with the angle from which he or she sees the work. This element of human interaction, according to Nam, is intended to connect the drawings with the exhibition’s sculptural elements.

“This exhibition came together very organically,” James Voorhies, Director of the Carpenter Center, says. “Both Axel [Häusler] and Silvia introduced the idea to have these forms and to explore the relationship between these forms [and] the building and with the way we walk through the lobby.”

The exhibition’s opening reception on Feb. 3 extended further the architects’ responses to the idea of space. Jill Johnson, Harvard’s Director of Dance, gave a performance accompanied by Hans Tutschku, a composer and Director of the Harvard’s Studio for Electroacoustic Composition. “[Benedito] talked to Jill a lot about bodily movements and responding to a space with your body,” Nam says. “I think the exhibit touches on sensorial awareness or acuteness of how your body reacts to a space, so it was important for her to have Jill as part of it.”

Voorhies says that the collaborative aspect of the opening reception spoke to the original ethos of the building, meant to be a meeting point for different departments and disciplines.

According to Nam, the architects also hope to highlight the seemingly obvious, often overlooked presence of air in space. “[Benedito] mentioned to me that air is something that we always forget about,” she says. “It’s so ‘natural,’ but at this point, we’ve basically ruined the air, environmentally. This installation kind of teases out the sensation that you should pay attention to the atmosphere.”

“Pneuma(tic) Bodies” will be on view at the Carpenter Center until Feb. 21.