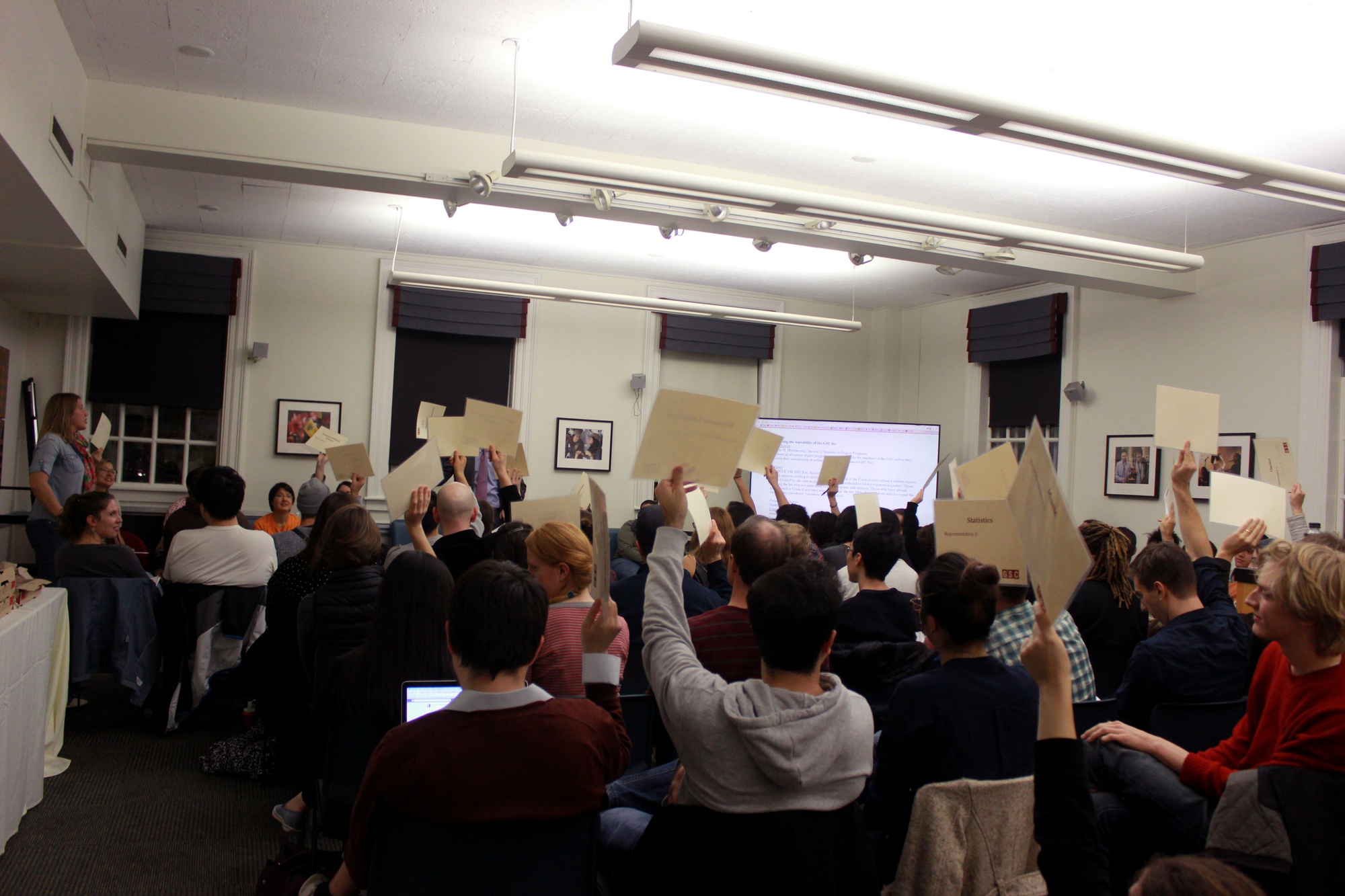 Harvard jointly filed an amicus brief to the National Labor Relations Board on Monday arguing against the unionization of graduate students, joining six other Ivy League universities, Stanford, and MIT in a call for the board to uphold existing rulings that define the relationship between private universities and graduate students as strictly academic.

In an email sent to faculty members, Faculty of Arts and Sciences Dean Michael D. Smith and Graduate School of Arts and Sciences Dean Xiao-Li Meng wrote, “Along with our peer institutions, we share the concern that introducing labor unions into this educational relationship would disrupt academic programs, administration of financial assistance, and infringe upon academic freedom.” 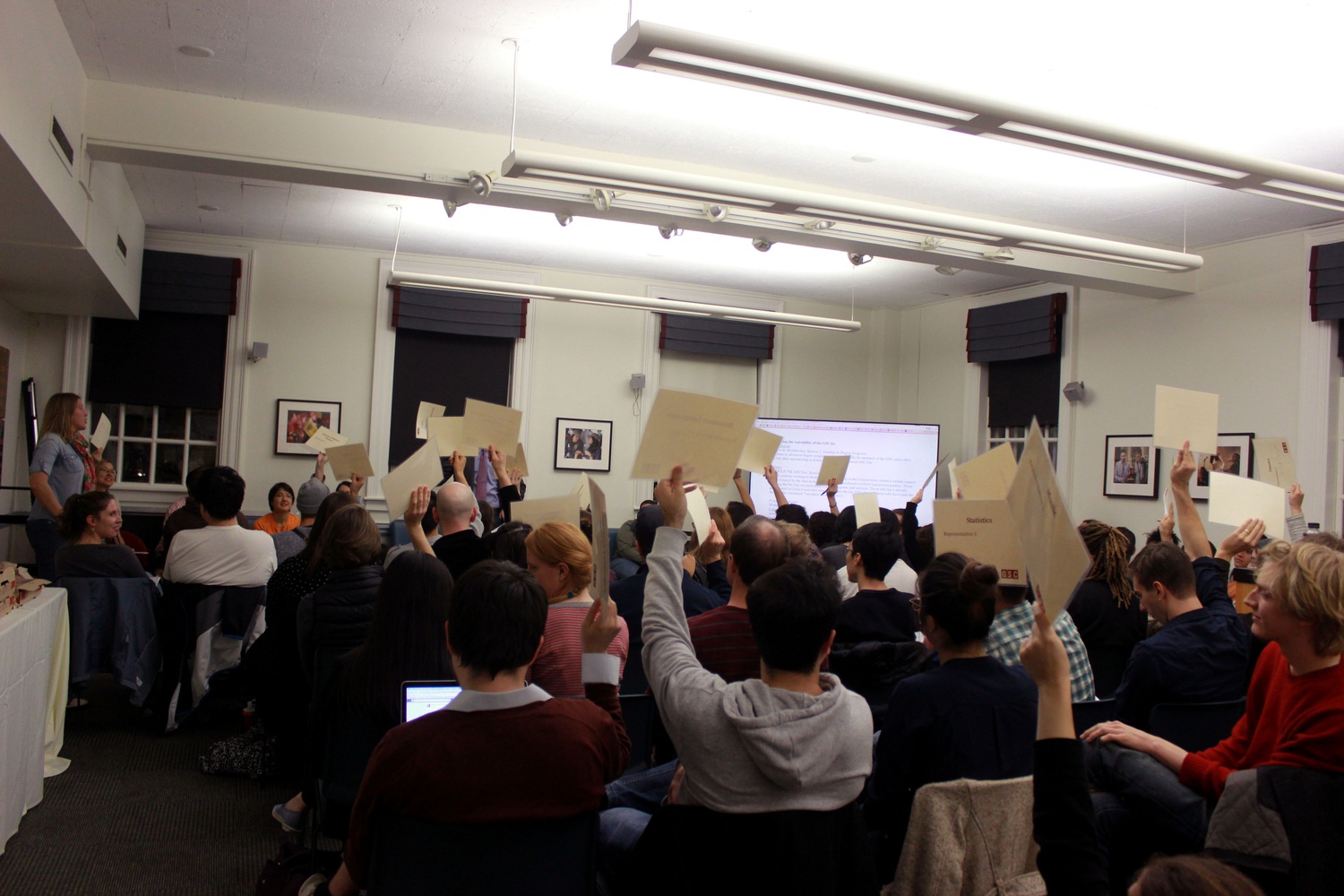 The Graduate Student Council discussed whether to support graduate student unionization. By Savannah I. Whaley

Last April, a group of graduate students at Harvard made public their unionization efforts, and last week leaders of that group indicated that their movement had gained support from the majority of graduate students who work across Harvard as teaching fellows or research assistants.

The brief, filed jointly by nine universities at the solicitation of the NLRB for the Columbia case, comes while graduate students across the nation—including at Harvard—push for their universities to recognize them as employees with the right to collectively bargain.

The brief emphasizes the strong stance Harvard has already taken against unionization, arguing that the formation of a graduate student union would fundamentally change the relationship between graduate students and universities to one based in labor, not in education, and that such a move could “transform the collaborative model of graduate education to one of conflict and tension.” University President Drew G. Faust has made clear her opposition to unionization on similar grounds.

“Both collective bargaining and arbitration are, by their very nature, adversarial,” the brief states.

GSAS administrators sent students an email late Monday afternoon announcing the filing of the amicus brief and reiterating their stance against unionization. The Harvard Graduate Student Union-United Auto Workers posted on its Facebook page that members “are disappointed in the administration's continued interference with our democratic process and their refusal to recognize or respect the majority of graduate workers who have openly called for a union.”

For some students, the filing represents a shift in Harvard’s strategy regarding the unionization effort. In October, GSAS administrators issued guidelines on how to respond to the movement—welcoming discussion but discouraging hostility.

“So far, it feels like the administration has been running a pretty dainty, gentle anti-union campaign, and we expected it to get more aggressive and we couldn’t predict the form that it would take exactly,” Ph.D. student Abigail Weil, a member of the unionization effort, said.

John T. Trumpbour, research director of the Labor and Worklife Program at Harvard Law School, said he thought the University’s move was not surprising.

“I think that the private universities really feel that they are at a turning point, so a lot of them really want to do as much as they can to stop these victories now, and this they see as a very crucial decision,” Trumpbour said. He added that if a Democrat is elected the next U.S. President in 2016 and the NLRB rules in favor of graduate students, it could be difficult for a future board to reverse that decision.

Weil said she disagreed with the brief’s claim that collective bargaining is inherently contentious.

“We’re not trying to be adversarial or have any animosity towards our employers,” Weil said. “We want to come to the table as equals.”

Chamith Y. Fonseka, a Ph.D. student and a member of the unionization effort, wrote in an email that he is “particularly disappointed in the administration because - contrary to the University’s claims - efforts like these are exactly what creates an adversarial relationship between the administration and student body.”

Much of the brief focused on the threat a union could pose to academic freedom. The brief described a hypothetical situation in which a professor wants to change the format of a final exam from multiple-choice to an essay, and, as a result, a graduate student union files a formal grievance charging that the change could create extra work for teaching fellows.

The brief also cites issues that have surfaced at New York University, the only private institution that has voluntarily recognized a graduate student union, such as grievances filed over the selection of teaching assistants.

“Given the experience of NYU, it is a near certainty that the advent of bargaining with graduate assistants will irrevocably damage graduate education in the private sector, and potentially undergraduate education as well,” the brief states.

The brief also states that the process of filing grievances against faculty could have an “enormous and psychologically destructive” impact on graduate students and faculty.

Trumpbour said he disagrees that unionization would be harmful to graduate education. As a Ph.D. student at Harvard in the ’90s, he said representation could have made it easier to voice his opinions without being singled out.

The brief added that the relationship between university and student cannot be separated into “distinct spheres” of employee and student. But Weil said such a distinction is not necessary.

“We don’t feel that being an employee and being a student are mutually exclusive categories,” Weil said.

The brief—which Weil called an “11th hour decision”—was filed on the last day the NLRB allowed submissions from interested parties. Responses to the amicus brief must be filed by March 14.