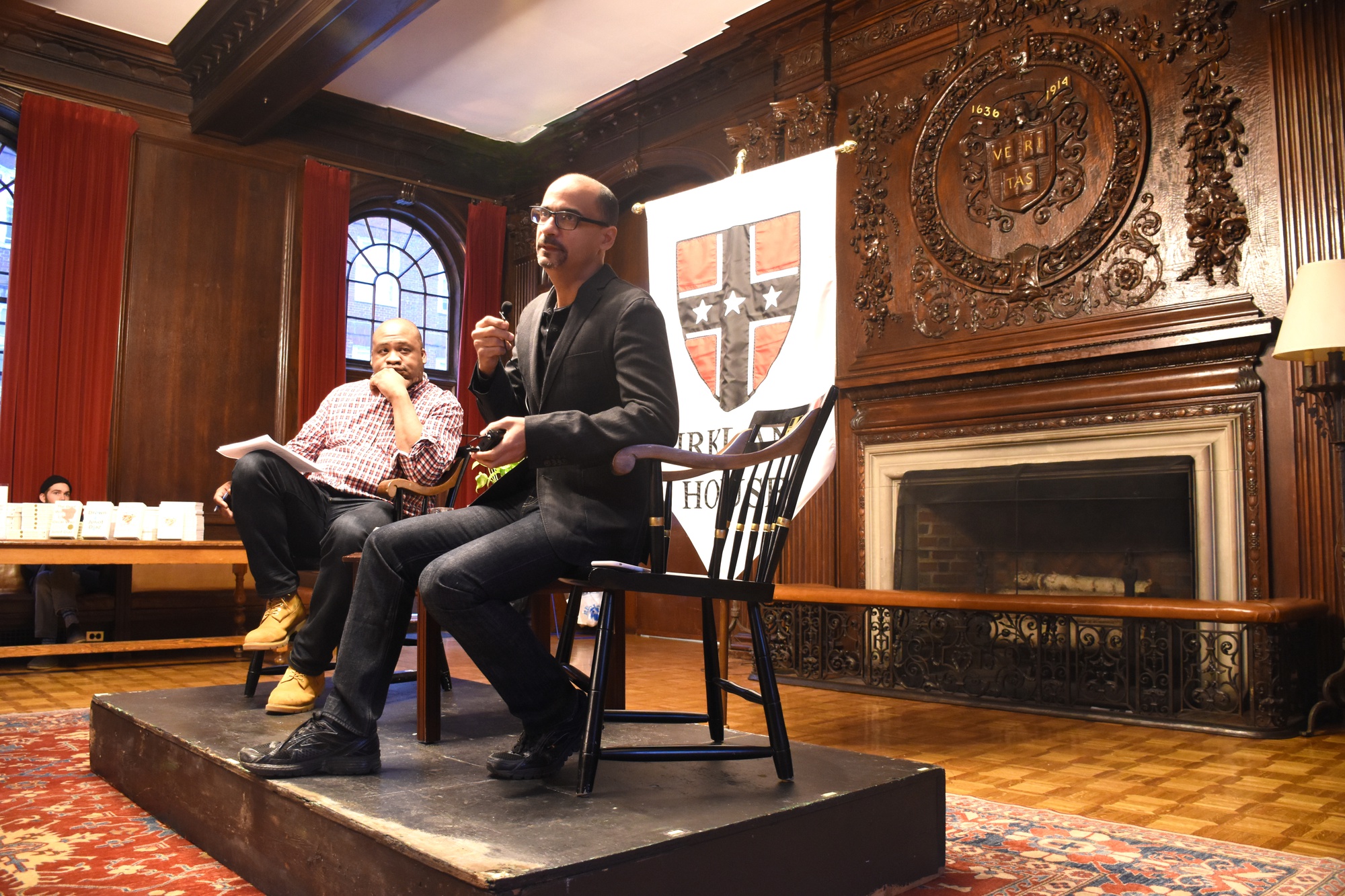 "So rare are eruptions of activism that have at [their hearts] justice that I am just so glad to have it—I never wished to have it earlier or later."
By Ignacio Sabate

Junot Díaz, author of “The Brief Wondrous Life of Oscar Wao,” is one incredible multitasker. Only minutes after giving a two-hour talk, Díaz simultaneously signs piles of books for fans and chats with FM. 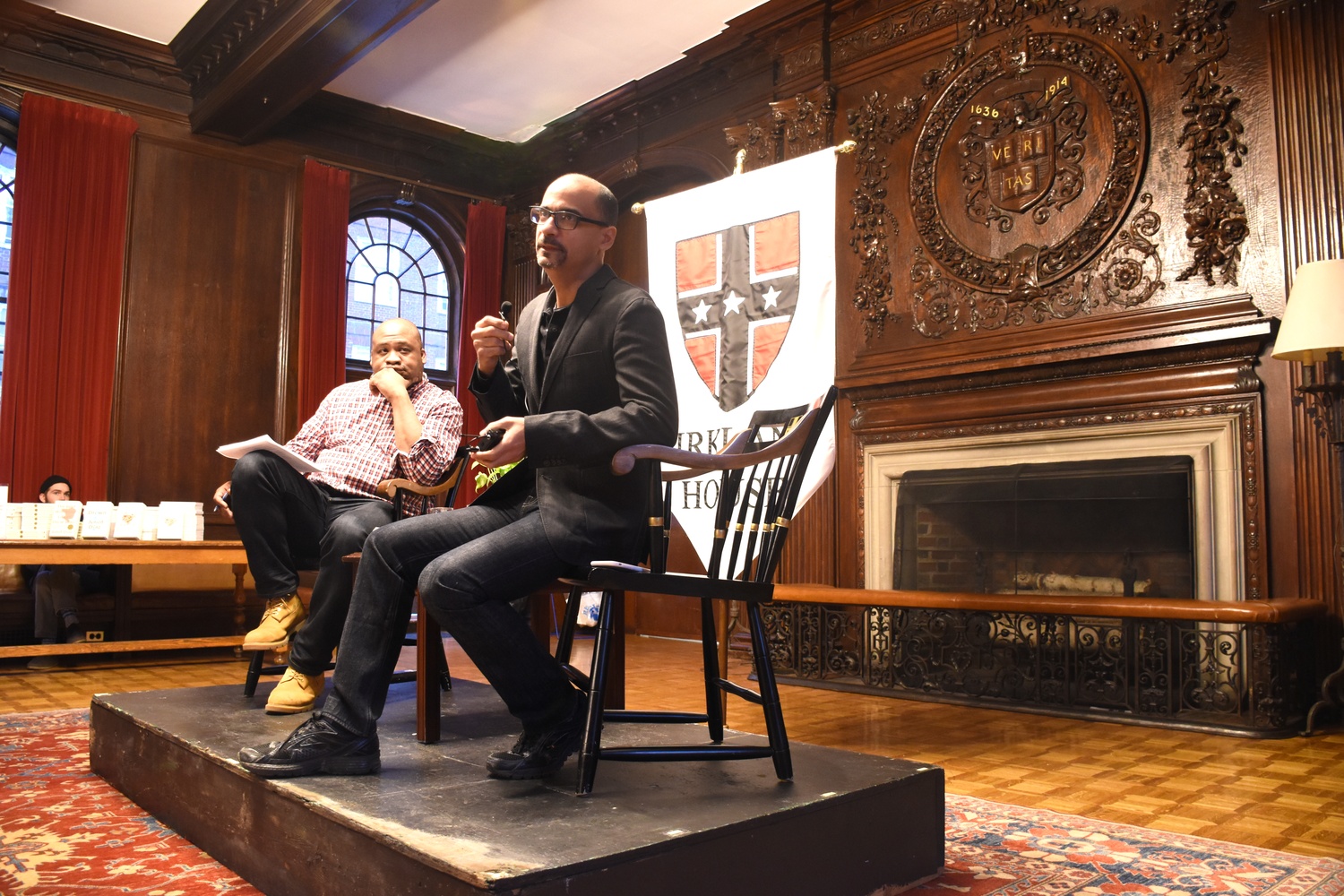 FM: You always say you’re a voracious reader, so what’s currently sitting on your nightstand?

JD: My goddaughter, who lives in Japan—her photograph.

FM: Well, what are you reading now?

JD: I am reading all the finalists for the Pulitzer Prize. I’m on the board, so it’s confidential, but it’s an enormous amount of reading.

FM: With regards to writings, what have you been working on over the past two weeks?

FM: Who is someone you really admire in academia right now?

JD: Oh my God, in academia?... I admire Arlene Davila. She’s an anthropologist over at NYU. I admire her tremendously. I admire another colleague of mine, someone who of course is absolutely brilliant, the scholar Satya Mohanty. He made a huge impact on me as an intellectual. And another scholar, her name is Paula Moya, she’s over at Stanford. She’s both a friend and someone whose work has been hugely influential on me.

FM: Who else outside of academia?

JD: Oh! The journalist Óscar Martínez, who wrote "La Bestia." That was a really, really important book. That book fucking blew me the fuck away—it was extraordinary.

FM: Changing topics a little bit: During the dialogue that was just hosted, you talked about the Black Lives Matter movement. Why now? Why is this something that has come up over the last year and not 10 years ago?

JD: Well, it’s always an interesting game trying to figure out and reverse-engineer why a movement came up, and you could always come up with a thousand different combinations of causes, but probably those same arguments and conditions could have been met elsewhere and nothing happened. I think history is a very spooky, spooky thing.

FM: What about our current context has made these types of movements so prevalent at this very moment?

JD: Certainly there’s no accident that we have a plurality of young people who have leveraged social media and leveraged a critical set of skills around race and culture and hegemony and a common vocabulary to great effect. And it’s just important that we have a generation of young people who are growing up with this model, whatever its shortcomings may be. Young people actively trying to transform their society—there’s going to be a lot more of that. Just in terms of demographics alone and how many more young people there are, being a young person under these neoliberal conditions is a very fraught affair. No wonder these kids and young people are trying to kick ass because this system is a burden to them, and I’m not surprised that some of them are trying to transform it. You can draw these same connections from Black Lives Matter to Arab Spring to all sorts of youth movements across the world. Young people have grown in numbers, and they’re growing in confidence, and they’re facing a society that has been organized to lock them out, and they want to change that.

FM: Given the current context of the elections and Donald Trump—a candidate pretty widely recognized to be conservative on these issues—winning states like Massachusetts, do you think that now is a good time? Would these discussions have been better placed a few years ago?

JD: So rare are eruptions of activism that have at [their hearts] justice that I am just so glad to have it—I never wished to have it earlier or later. I think these things arrive just in time. I tend to be more pragmatic; I’m like, “We’re just lucky to have them.” It is earthshaking for us to have a movement like this at any moment. It’s very inspirational to me to see what has occured and what is happening, both as an activist and as someone who is just interested in the future.

FM: Why do you think so many of these conversations have really taken root on university campuses?

JD: I think because we have a critical mass of smart, young people with the spaces and the technological means to have these conversations. Look, for a lot of young people, universities are places where they simultaneously come to understand themselves and understand the conditions of the world in which they inhabit.... It’s not a surprise that at that intersection of self-knowledge and world-knowledge and youth you begin to see these kinds of energetic conversations and movements.

FM: One of the problems that many groups on campuses face when organizing is that institutional memory is so short. What can people do to try and combat that?

JD: One of the things is to understand that the nature of this beast is that it reboots every few years and that there have to be ways for this generation to think about archiving some of its experiences—whether each group comes with its own strategies—thinking about having Houses with a designated historian. For example, why doesn’t the history and the counter-history of each of these Harvard Houses get handed to each student? That would, at least for me, be an interesting way to keep historical memory alive.

FM: What do you make of the change to the House master title?

JD: Harvard is very Talmudic in its self-preoccupations; it’s not surprising that it has excited a lot of activity. If they had conferred with any of us decades ago, we probably could have told them that it was probably time to change the title. I think these universities like to cover their innocence when in fact the real question is why were we not asked 50, 70, 90 years ago. How is it that an institution that has benefited so clearly from chattel slavery is unaware of some of the larger resonances that some of these “innocent terms” might have on the children of the very enslaved Africans who enriched these spaces?

FM: What do you think about Harvard’s decision to not offer Latinx studies here?

JD: These schools determine, in a large part through their institutional power, what is worthy of study, and it is nothing short of criminal that at this day and age Harvard not only does not have Latinx studies, but that there’s still a conversation being bandied around. It also shows you how hegemony works. I mean, those of us who are attempting to understand how latinidad works in this world, those of us who embody latinidad, those of us who are imbricated in latinidad—we have to put ideas of ourselves together by the seat of our pants. We don’t have institutional power that opens up spaces of deliberation that allows us to become and understand. It’s hard for a community to come to understand itself.

FM: You say this is critical to understand ourselves. How does this affect other communities?

JD: It takes these white kids kindergarten, elementary school, middle school, high school, college, television, politicians, their doctors, their physical neighborhoods…. Everything is an academy that teaches them about themselves, and when we come to a place like Harvard, where riches are endless, the largest “community of color” cannot have a small space where it may begin to access itself. It’s extraordinary.

FM: How does your experience working in English and Spanish differ? During your talk, you mentioned that Spanish language has a more fluid nature, and you can take some words and spin them in new ways.

JD: I would say that characterologically, I’m different in the two languages. I’m very well defended in English. In English, it’s like I’m a Death Star, and I would say that I’m far more sincere in Spanish. My friends always say, “Wow, you are such a nice and relaxed person in Spanish.”

FM: What’s up your sleeve for the next year?