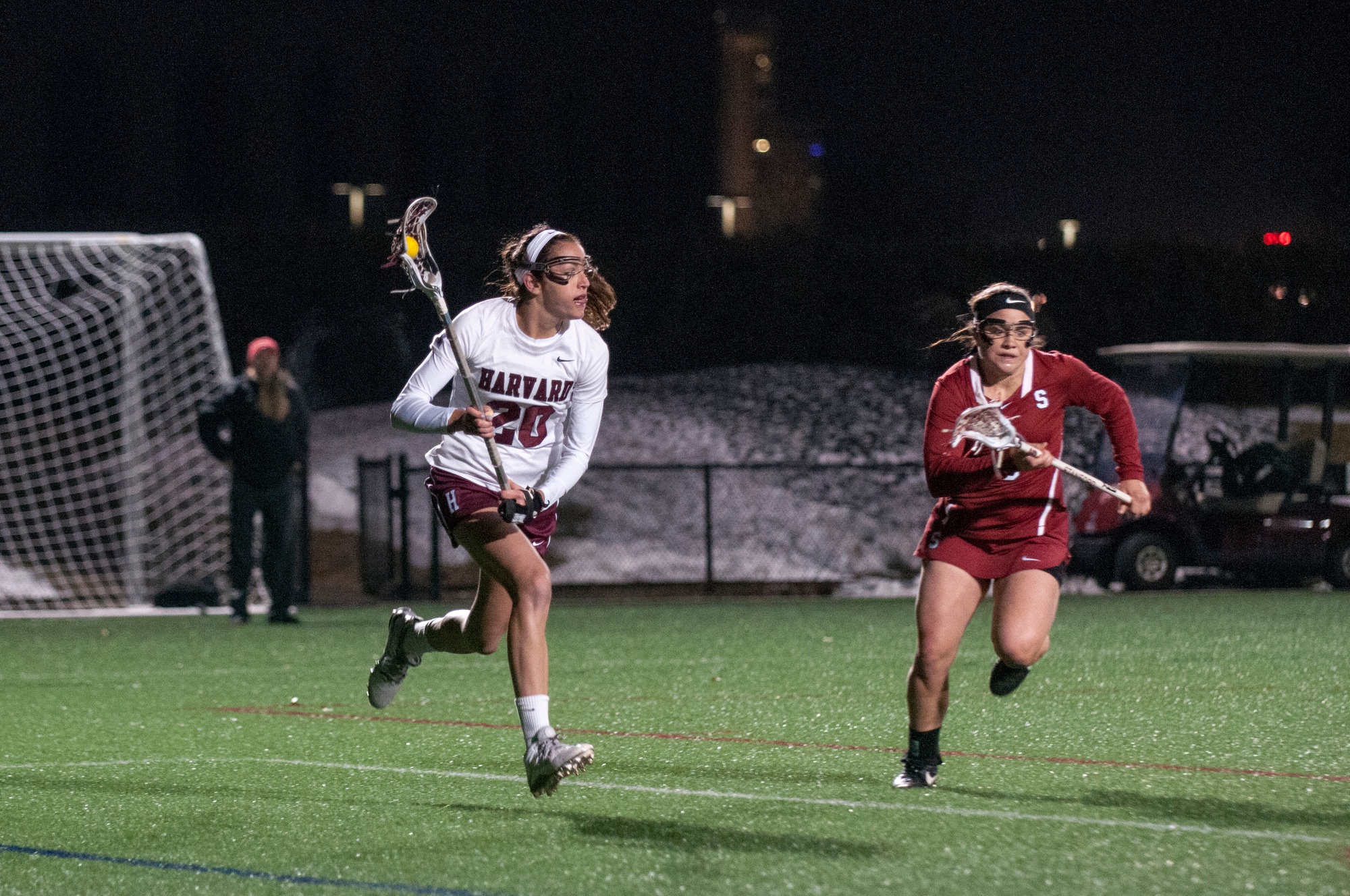 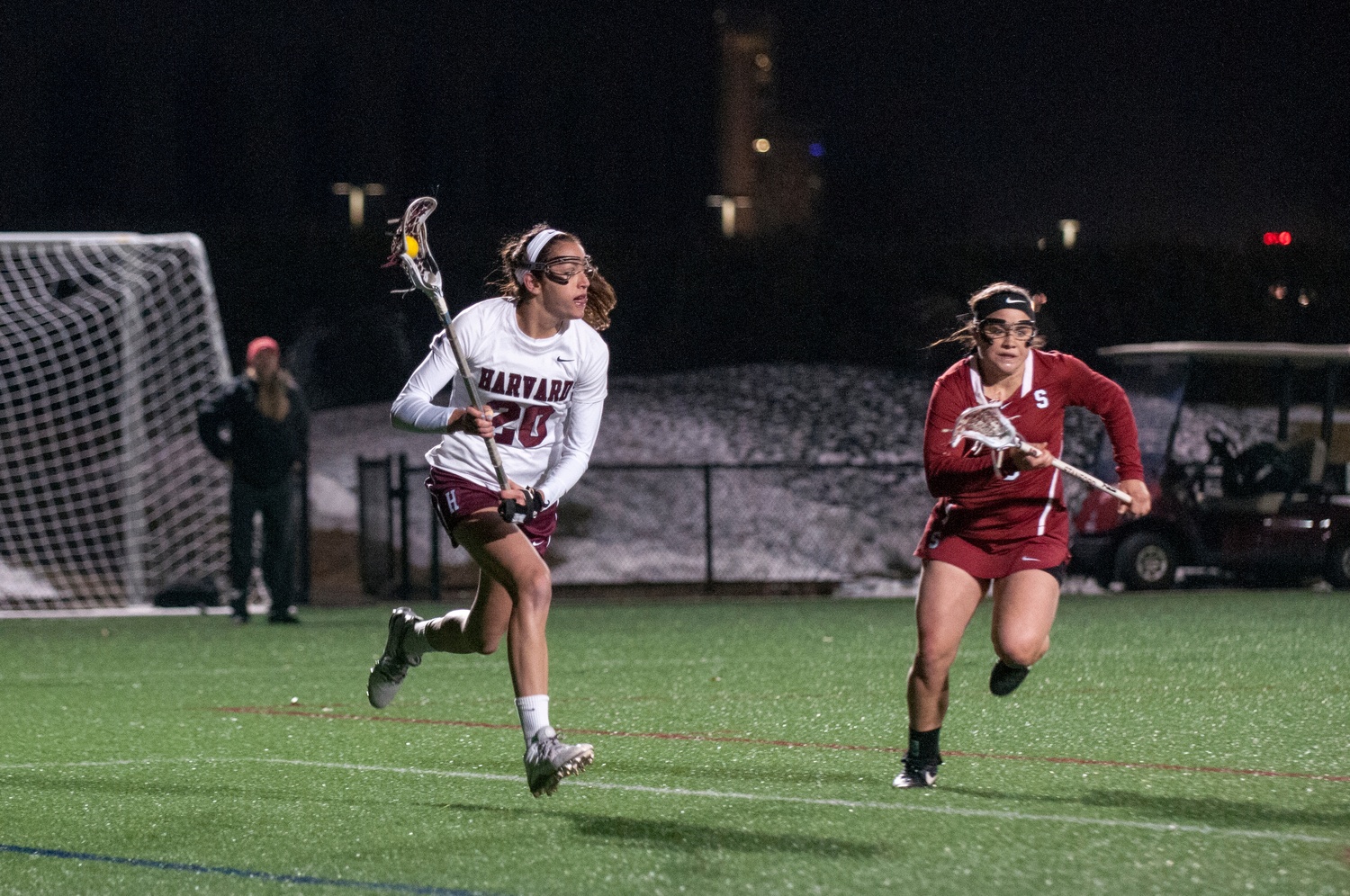 Junior Marisa Romeo, pictured in earlier action, had three goals and three assists in a dominant win over Holy Cross. By Mark Kelsey

In the midst of one its most challenging weeks of the year—with two games against top 10 programs in seven days—the Harvard women’s lacrosse team faced a different kind of test this Tuesday. Squaring off against a squad that has yet to pick up a win this season, the Crimson needed to keep its focus and avoid slipping up.

“The game went really well tonight,” junior attacker Marisa Romeo said. “They put a lot of pressure on but we handled it well. Lots of people played and everyone contributed to the winning effort.”

A standout performance from the offense helped lead the Crimson to the win. Junior attacker Maeve McMahon was perfectly efficient on the night, notching four goals on four shots.

Meanwhile, Romeo collected three goals and three assists to take her points total for the year to a team-high 22.

McMahon’s sparkling conversion rate reflected a team-wide efficiency in front of net. While the Crusaders actually outshot Harvard on the night, 28-22, the Crimson put the same amount of shots on goal as did Holy Cross.

The Crusaders were unable to convert their higher shot total to goals largely because of co-captain goalkeeper Kelly Weis. The senior stopped a career-high 15 shots to limit the Crusaders to their lowest goal count against the Crimson since 2008.

Weis’ dominant showing between the pipes topped off a strong night for the entire Harvard defense that saw the Crimson outdo the home team in both ground balls and draw controls.

“The defense slowed down their o fense and came up with key caused turnovers, and we didn’t let them go on a run and fight back in the second half.” sophomore midfielder Julia Glynn said. “Kelly had a great game in cage and Nekele came up with the draws when we needed them.”

With the offense firing on all cylinders and the back line holding strong, Harvard slowly built up a decisive lead over the course of the first half that it would not relinquish all night.

McMahon picked up her first goal three minutes after the opening whistle, but the Crusaders defense would find its footing, keeping the Crimson from increasing its lead until Romeo finally broke through to collect her first score of the night seven minutes later.

McMahon then chipped in two more goals, both assisted by Romeo, to put Harvard up, 4-0, halfway through the period.

Holy Cross cut into the Crimson’s advantage with a finish from attacker Tess MacKay, but the visitors responded with four goals in two minutes to crush any attempt at a comeback. Senior midfielder Alexis Nicolia, sophomore attacker Eliza Guild, McMahon, and Glynn each found the back of the net to pull the team’s lead to 8-1.

Nicolia and Romeo would each put away one more goal before halftime, while Weis and the rest of the Harvard defense held firm at the other end to send the Crimson into the break ahead by nine points.

Determined to put the game to bed, Harvard burst out of the gates in the second stanza, as freshman midfielder Ali Thaler scored in the first minute of the period, and fellow freshman and midfielder Caroline Garrity picked up her first score of the season two minutes later.

Romeo notched her third goal of the contest and her 16th of the year with 25:31 on the clock to round out Harvard’s scoring for the evening.

Holy Cross would claw back with two more finishes before the final whistle, but it would not be enough to keep Harvard from collecting the win.

Although it came against a non-conference opponent, the victory could help Harvard establish some confidence as it heads back into Ivy League play against No. 10 Princeton.

“This game will help us for Princeton because we got to see a different type of defense and offensive formation,” Romeo said. “That will help us to learn how to adjust to whatever is thrown at us.”