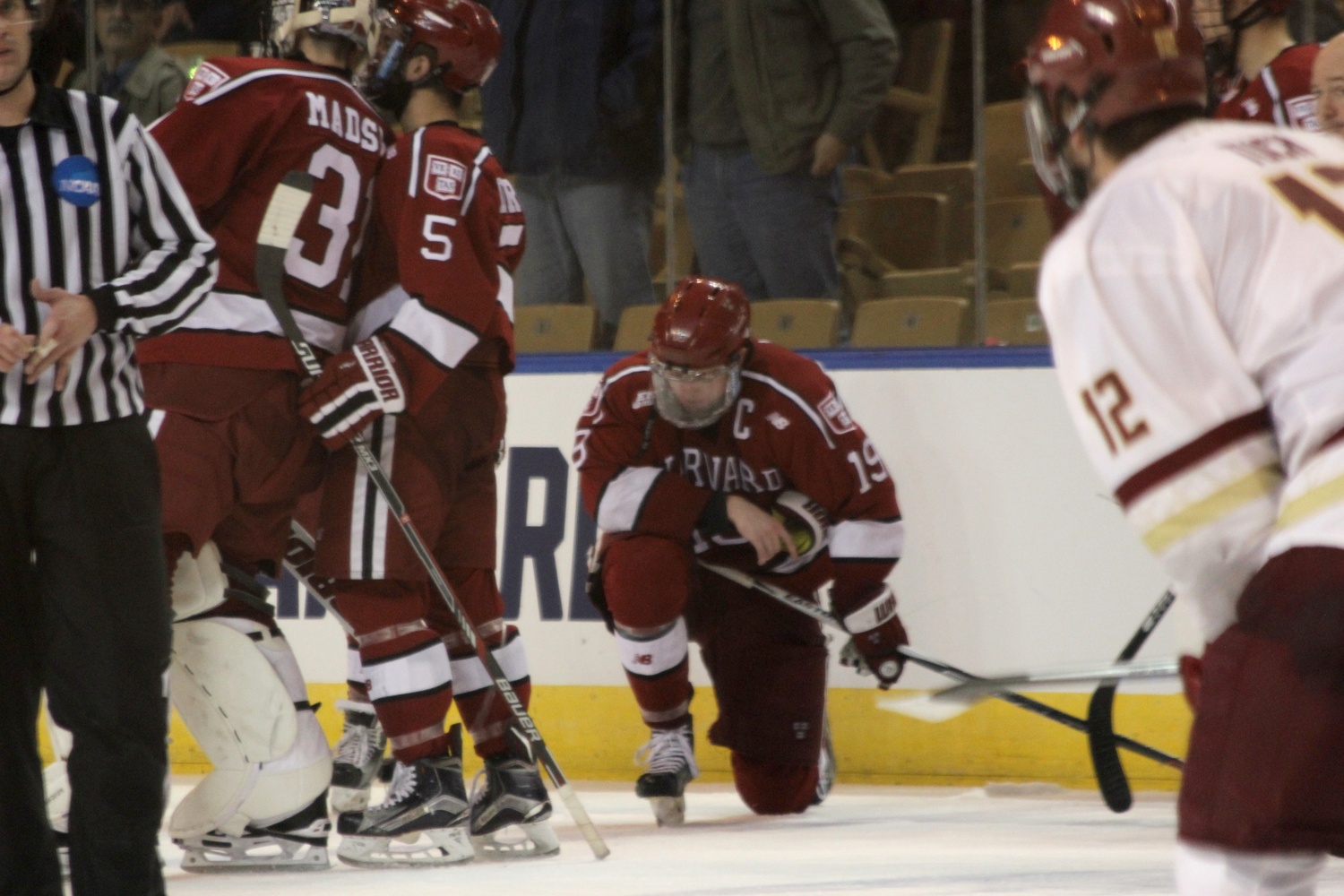 Jimmy Vesey (19) gets down on one knee after the final whistle blows on both the Crimson's season and the senior's collegiate career. By Thomas W. Franck
By Jake Meagher, Crimson Staff Writer

Jimmy Vesey, Kyle Criscuolo, and the seniors of the Harvard men’s hockey team have written quite the novel over the course of their Crimson tenures. After all, Harvard’s eldest class not only doubled its freshman-sophomore year win total over the last two seasons; it spearheaded the resurgence of a struggling program in the process.

But now that the ending is in the books, it appears as though the authors may have left a bit to be desired. 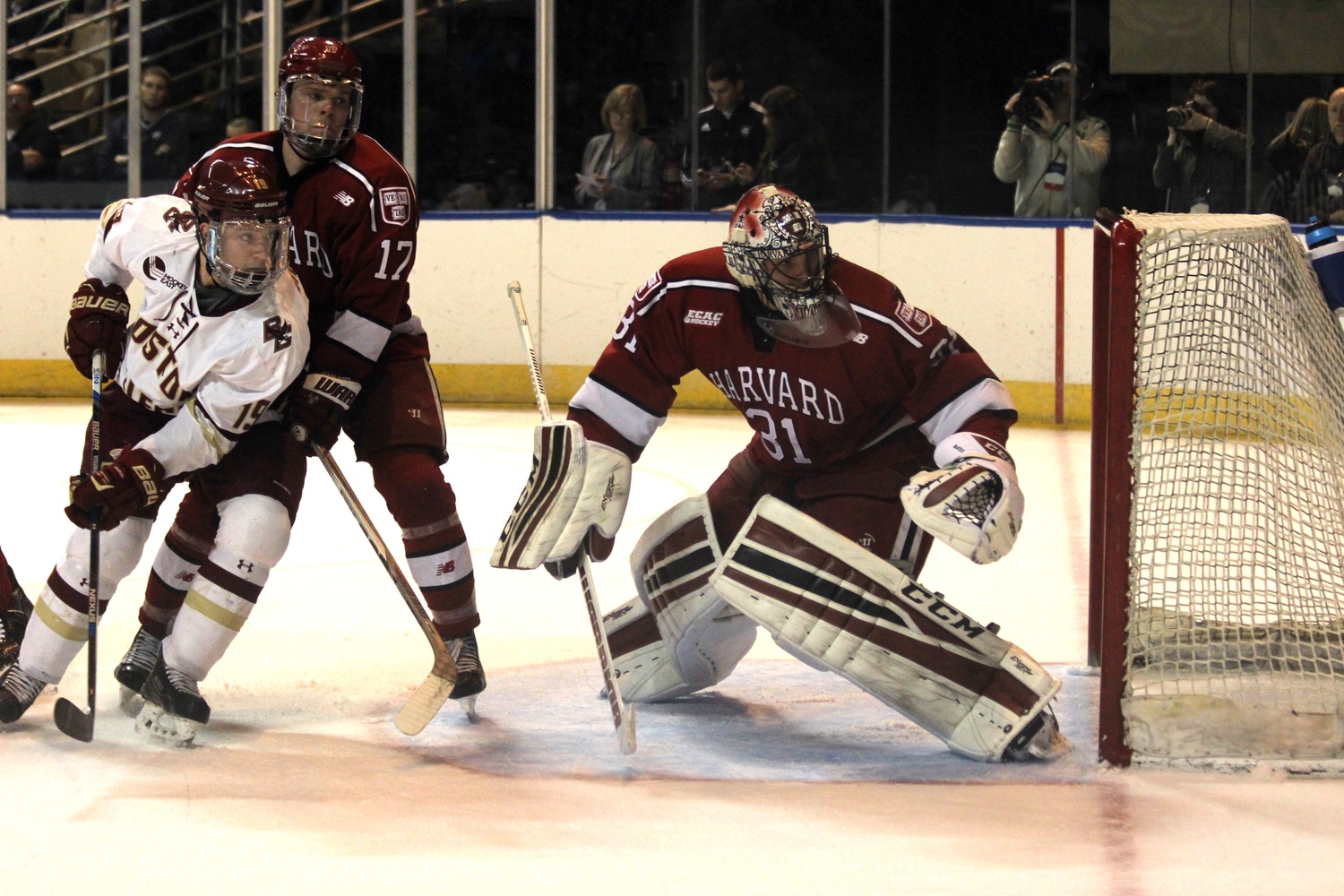 Sophomore goaltender Merrick Madsen made 21 saves in a season-ending 4-1 loss to Boston College on Friday. By Thomas W. Franck

For the second year in a row, the Crimson’s NCAA tournament run came to an abrupt halt by way of a 4-1 defeat in the opening round—this time at the hands of local foe Boston College.

“I think we thought we were going to have a better ending this year,” Criscuolo said.

Instead, the ending mirrored last year’s tournament exit against Nebraska-Omaha. The No. 10/9 Crimson (19-11-4, 12-6-4 ECAC) dug itself a first-period hole at the DCU Center, giving up one goal amid a crowded crease and another late in the period on a power play.

Sophomore Alex Tuch opened the scoring 7:59 into the period, but not before he went crashing into Harvard netminder Merrick Madsen, knocking the goaltender partway into his goal. But with Crimson defenseman Desmond Bergin jawing with Tuch down low, the right winger received the benefit of the doubt from the officials, and poked home a loose puck to put his side in front. 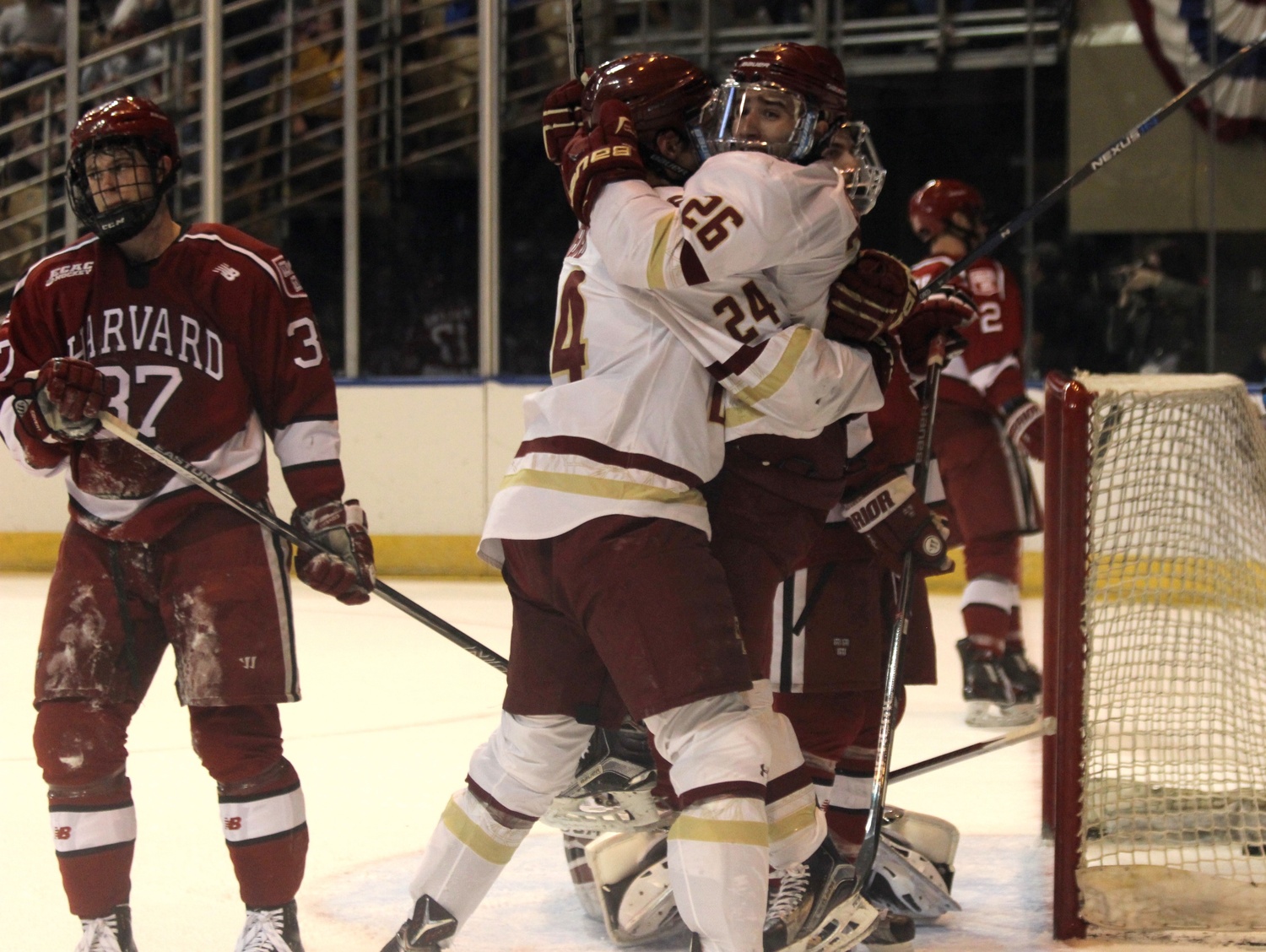 BC junior Austin Cangelosi (26) celebrates with sophomore Zach Sanford after Cangelosi scored what proved to be the game-winning goal on the Eagles' only power play. By Thomas W. Franck

Freshman Miles Wood set up the Eagles’ second goal on their only power play of the night, stemming from a hooking call against freshman Lewis Zerter-Gossage. After Bergin cut out a Wood pass on a 2-on-1, the rookie regained possession, circled all the way around the net to the top of the slot, and threw a shot towards goal that junior Austin Cangelosi tipped home at 18:58.

“He’s like a horse out there,” Cangelosi said about Wood. “You get him the puck, and he starts skating really fast, and he uses his big body, and there he took one of his hard shots to the net.”

Harvard had yet to win a game all year when trailing after the first period. Pair that with the fact that the Eagles had won 11 of their last 12 meetings with the Crimson, and BC getting the first goal of the second period made the end result feel like a foregone conclusion.

While Tuch had to grind for his first goal, he produced a beauty for his second. Blowing past senior defenseman Brayden Jaw along the left wing, Tuch took an end-to-end feed from junior Scott Savage and picked the top right corner against Madsen at 1:59 in the second to put No. 6/5 BC (27-7-5, 15-2-5 Hockey East) up, 3-0. 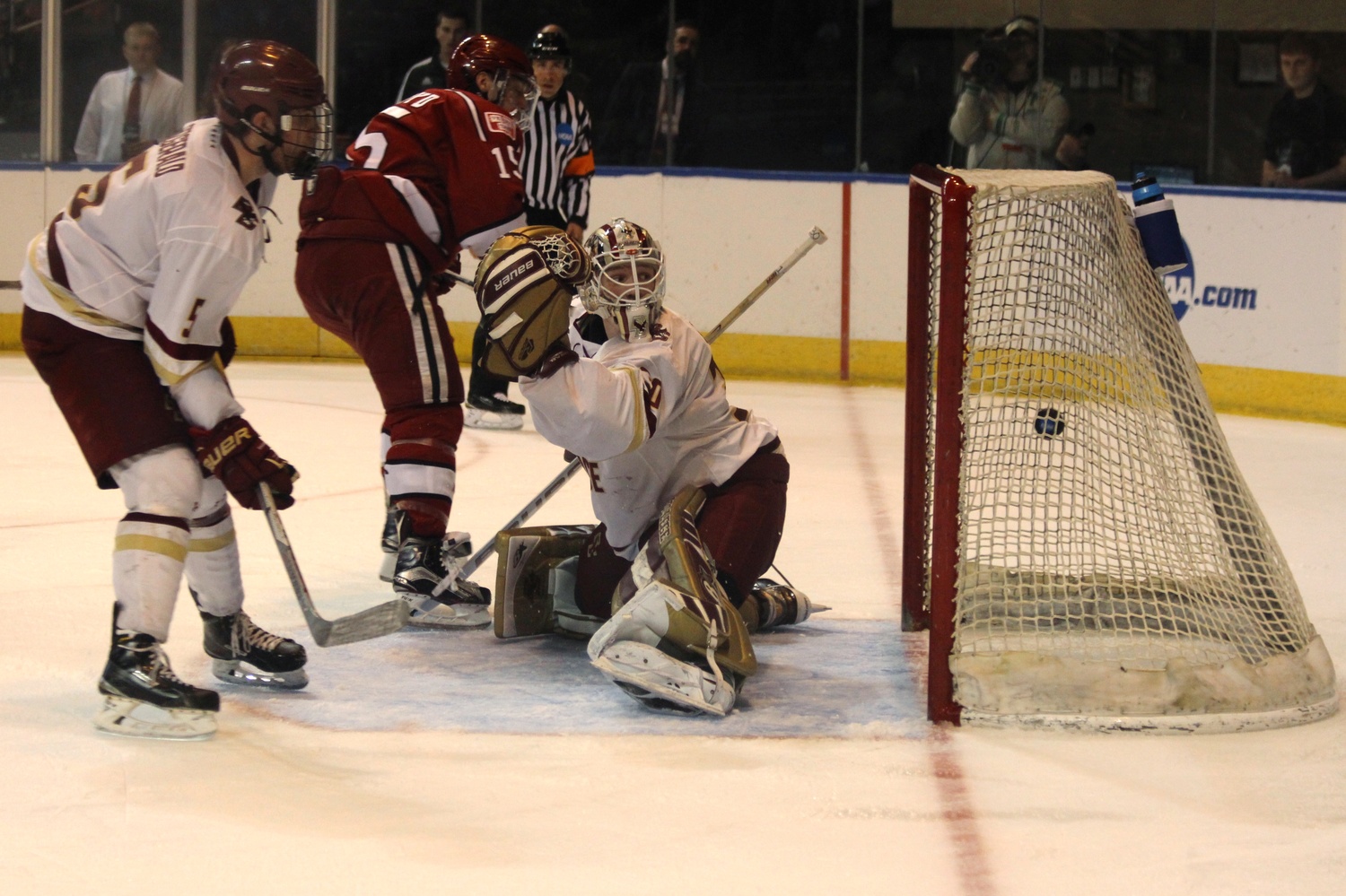 Seb Lloyd pulled the Crimson within two with this goal midway through the second period. BC's early strikes, however, ultimately doomed the Crimson. By Thomas W. Franck

Harvard jumped on the comeback trail midway through the second, as freshman Jake Horton fed Seb Lloyd low in the slot, and the sophomore lifted a shot past the glove of BC goaltender Thatcher Demko to pull the Crimson within two.

The goal got Harvard into a bit of a rhythm, and Vesey—despite logging only one shot on goal through the first two periods—nearly pulled the Crimson within one, missing just wide of the left post moments later.

“I thought he was pretty dominant tonight when he had the puck,” BC coach Jerry York said. “He was a dominant player. We held our own at best with him. Clearly, when he has the puck, he’s really dangerous, and Thatcher [Demko] made some good saves off of him. But he’s an outstanding, outstanding player.”

“They might have kept me to one shot [through the first two periods], but I had a couple more attempts,” Vesey said. “They were hard on me and my line all night. We went against [Ian] McCoshen every shift, but they had a good game and blocked a lot of shots.” 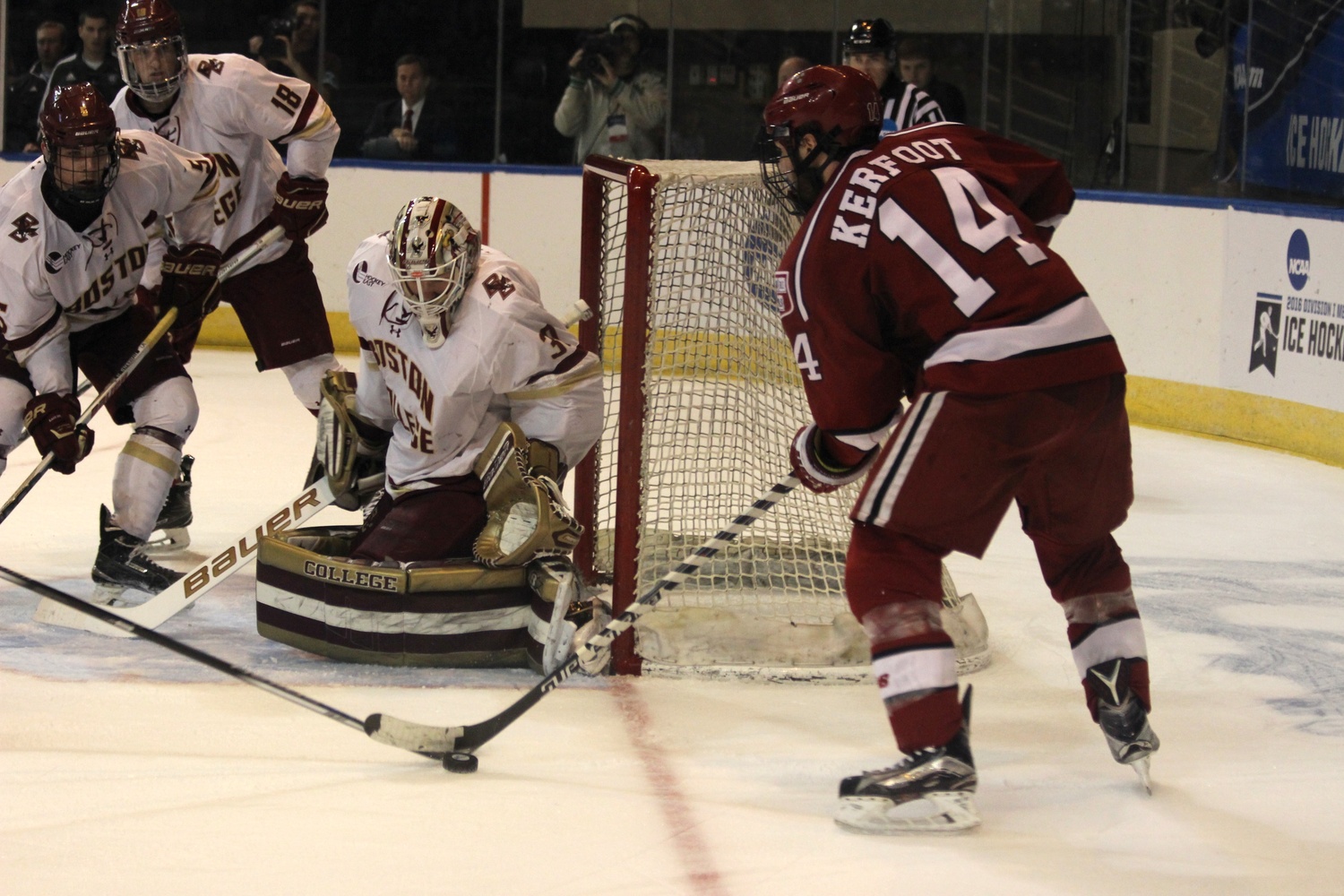 Behind the efforts of McCoshen, freshman Casey Fitzgerald, and Demko, the latter of whom stopped 32 of the 33 shots he saw on the night, the Eagles held the Crimson scoreless the rest of the way.

That includes on a Harvard 6-on-4 with 4:18 remaining. After Ryan Fitzgerald, BC’s leading scorer, went off for hooking with his team up two, Donato elected to pull Madsen to get six forwards on the ice. But the Crimson failed to solve Demko in the final minutes, and Cangelosi buried an empty-netter with 2:27 remaining to send the Eagles soaring into the Northeast Regional championship game.

“When it’s all said and done, some great players made some great plays for them,” Donato said. “We had an answer and tried to create some chances of our own…. [But] to get it back to one at the end of the first or even early in the second would’ve been a big emotional hurdle for us at the time.”

Freshman Ryan Donato and Criscuolo each nearly cleared that hurdle in the first period, but both came up inches short in their attempts to cut into the BC lead. With the Eagles up, 1-0, Donato dangled his way to the goalmouth but his backhander by Demko’s left post would not go. Then after the deficit grew to two, Criscuolo hit a post by the cage in the final minute of the frame.

Harvard outshot the Eagles, 33-25, for the game—a bit of an 180 from the teams’ last meeting on Feb. 1 where BC won that battle, 33-23, in the opening round of the Beanpot. But despite being outshot, the Eagles made better use of their chances, and as a result, they’re within one game of winning their sixth consecutive regional played in Worcester.

As expected, the Crimson was without 6’7” blue-liner Wiley Sherman, who missed Harvard’s final three postseason games with an upper body injury suffered against RPI in the ECAC quarterfinals. Sherman was seen after the game wearing a cast on his left arm.

Top-pair defenseman Desmond Bergin was also a gametime decision after being limited this week in practice while battling an illness.

“We weren’t able to get him on the ice over the last few days, so he was a question mark,” Ted Donato said. “We even dressed an extra guy for warm-ups.” 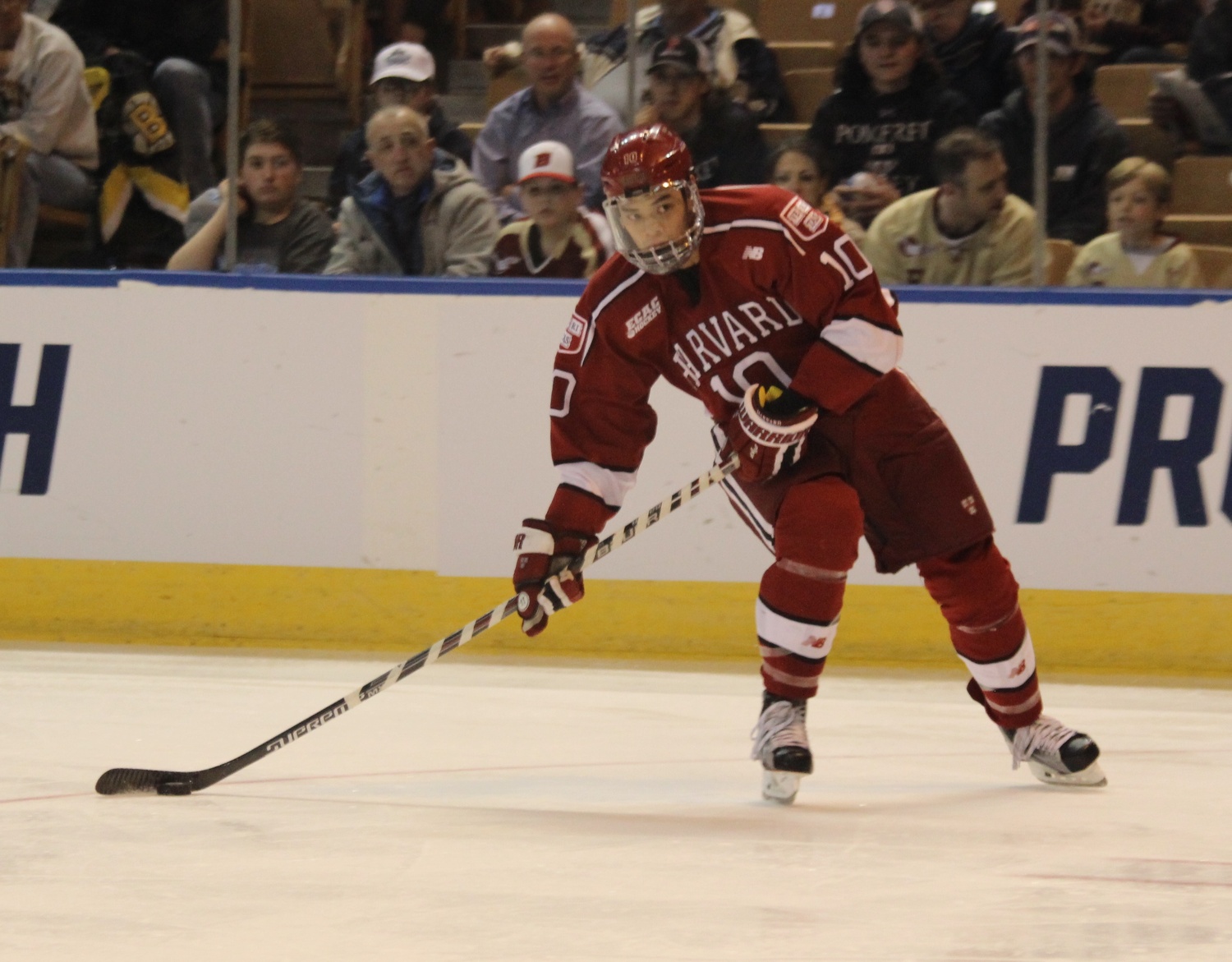 Senior Brayden Jaw and the rest of the Crimson defensive unit got out to a rough start against the Eagles on Friday. By Thomas W. Franck

Bergin did get the start on Friday, but the Crimson’s banged up blue line ultimately met its match. While sophomore Thomas Aiken and freshmen Adam Baughman and Viktor Dombrovskiy held their own for the most part, defensive mainstays Clay Anderson and Jaw were burned on the Eagles’ second and third goals, respectively.

The loss brings the collegiate careers of Vesey, Criscuolo, and the Crimson’s other five seniors to a close, marking the end of an era in Cambridge.

“Any time you play, you want to leave the jersey in a better place, and we made a great effort to do that,” said Vesey, sitting to the right of Criscuolo in the postgame press conference as the two struggled to hold back tears.