This year, the Undergraduate Council has made an effort to increase communication to students regarding funding requests.
By Brian P. Yu 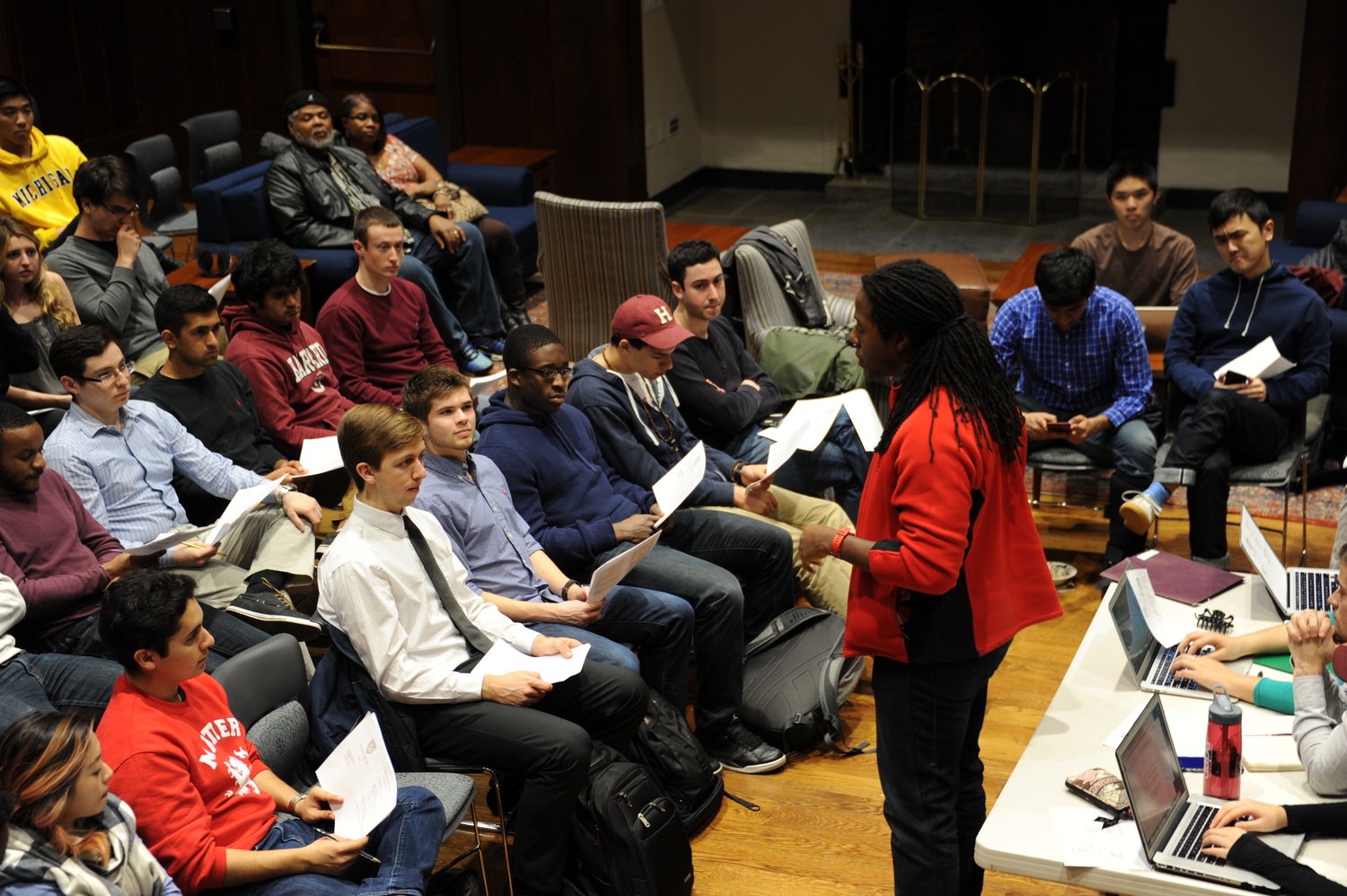 Since 2006, Concilio Latino, a campus Latino and Latin American cultural organization, has hosted a holiday dinner each year in early December. Last December, members of the organization approached the Undergraduate Council for funding for the event. The group had received funding in previous years for the dinner from the College's student government, which doles out more than $300,000 in grants annually.

A club board member paid for the event’s expenses on a credit card with the expectation that the UC would reimburse the cost, Vasquez-Rodriguez said.

However, on Dec. 5, three days before the event, the organization received an email from the UC denying them funding because the event would take place during reading period, according to Vasquez-Rodriguez. Finance Committee rules prohibit the UC from funding events during shopping, reading, or exam periods.

This semester, the organization brought the issue up with the Finance Committee and asked to be reimbursed.

“Theoretically, they should have read the policy guide and known not to apply,” Finance Committee Chair William A. Greenlaw ’17 said during a committee meeting in February. “But it seems slightly different when they come to us at the grant meeting and we tell them they can get [the funds].”

The resolution is just one point in a larger discussion within the Finance Committee regarding how to improve communication between the UC and the student body, during a time in which transparency of the UC's financing decisions has come under scrutiny.

This semester, the UC published Finance Committee transactions dating back to fall 2011. And in an effort to inform club leaders of the Finance Committee’s 18-page long list of rules, which dictate funding on anything from film screening licences to board retreats, Greenlaw added all club treasurers to a central email list.

“Historically, Ficom has largely been a glorified savings account,” Greenlaw said during a committee meeting. “I’m interested in changing that.”

A LACK OF AWARENESS

Each fiscal year, the UC allocates approximately $300,000 to its grants budget, which the Finance Committee then distributes to student organizations based on its funding policy guide.

The grants budget and the budgets of several other UC committees are funded by a $75 UC Student Activities Fee that appears on all undergraduate students’ term bills each year. Students may waive the fee, but only by sending a physical letter to the Harvard Student Accounts Office requesting a waiver. Some students say they did not know the fee, or the waiver, even existed.

Beyond information about the UC fee, many students and organizations alike say they lack knowledge regarding the rules for Finance Committee grants, despite the information’s public availability on the UC website. Student organizations hoping to receive funding from the Council must submit a grant request proposal to the Finance Committee, and then attend an in-person interview with UC representatives, before receiving funding.

The Finance Committee largely relies on its policy guide to determine how much to allocate in funding. To many students, the rules are not immediately intuitive: publications can only receive up to $500 per semester, costumes are eligible for $1,000 per calendar year only if they are reusable in future performances, and DJ’s can be paid at most $150 per event.

This semester alone, two organizations so far have requested UC funding for their club’s website, only to be promptly denied during their grant interviews. Rule 35 of the Finance Committee’s policy guide states that the UC generally will not fund student organization websites, instead suggesting that organizations apply for a website through the Harvard Computer Society.

Similarly, two organizations this academic year have also requested grants for holding fundraisers, despite the UC’s explicit rule against funding such events.

Thomas A. Lee ’19, who became treasurer for Harvard-Radcliffe Music in Hospitals and Nursing Homes Using Entertainment as Therapy at the beginning of this semester, requested funding in February for the club’s annual black tie concert fundraiser. Under the UC’s rules regarding fundraisers, he was turned down during his grant interview.

“I was not aware of that rule ahead of time. That was the first UC grant that I did,” Lee said. “It’s a good learning experience.”

“It’s not going to hurt us if we don’t get anything, but it’s always nice if we can get a little bit of help,” Lee added.

Additional rules, such as the rule against funding projects during reading period—an Office of Student Life stipulation—have also taken some students by surprise. During the same general meeting during which Concilio Latino was denied funding, three other organizations also did not receive funding for events that were to take place during reading period, according to the meeting agenda.

In addition to a decrease in the amount of funding requested, the Finance Committee has also witnessed a decreasing number of grant requests from student organizations over recent years.

Greenlaw characterize the decline in grant requests during a UC general meeting in February as indicative of a “communication problem” on part of the Finance Committee.

In some cases, even when student organizations did request funding, members of the organization did not show up to their scheduled interview times.

In one instance, during the Feb. 17 Finance Committee meeting, seven grants requesting a cumulative total of more than $2,500 were denied any funding because representatives from their respective grant-requesting organizations did not attend interviews.

Even when students do show up to grant interviews, they often fail to show up to office hours with the UC Treasurer to receive their check or direct deposit. Of the 344 grant requests that were allocated funding last semester, 78 were never picked up by their requesting organizations, amounting to $28,824 in unutilized grants.

“If you can’t check your email for free money, I’ll give it to someone else,” Greenlaw said, when asked about absences during a UC general meeting. “We can’t give money to folks who don’t come get it.”

The Finance Committee has taken steps to improve communication between the committee and students. Earlier this month, the committee unanimously voted to pass a communication reform bill which seeks to keep club presidents and treasurers up to date on funding policy changes. It also ensures that student organizations that would be affected by funding policy changes are notified and consulted ahead of time.

The bill came in response to a controversial finance committee bill which placed a cap on funds to theater organizations. Harvard-Radcliffe Dramatic Club President Aislinn E. Brophy ’17 said that her club was “disappointed with the lack of communication this semester,” in part due to the policy, and also because of a lack of clarity on what date theater organizations would be required to attend grant interviews.

Brophy said at a UC meeting earlier this semester that the Finance Committee had imposed a deadline for theater productions to apply for funding without notifying the HRDC board directly. While the Finance Committee later reached out to theater organizations to resolve the matter, Brophy said the situation reflected a “lack of transparency” and “miscommunication.”

The Finance Committee’s recent reforms to its communications policy appear to be working, Greenlaw said. In the five grant packs this year leading up to the passage of the communication reform, student organizations submitted an average of 38 grant requests per week.

In response to the large increase in grants last week, the Finance Committee issued its first grants pack cut of the year. While total allocations were projected to total $22,658, the committee cut the grant pack’s funding by 15 percent to bring the total below its $20,763 budget for the week.

Although student groups request funding for a variety of venues and supplies, more than half of all funding requests last semester included food, which the Finance Committee strictly caps to a maximum of $4 per student for full meals. Small meals can be funded at $3 per person whereas the UC can subsidize snacks and desserts at $2 per person.

However, many student organizations routinely request more than the maximum per person allotment for food.

Last November, Human Rights in North Korea requested a $95 food grant for an event, but was only eligible to receive $30 because of the funding rules. In December, the Singapore, Indonesia, and Malaysia Association requested $1,000 but only received $135 for the same reason.

Members of the Finance Committee have on multiple occasions raised concerns about the current food funding policy, and suggested that an amendment to increase funding may be advisable.

“It seems like people get the short end of the stick when it comes to the food policy,” Bonsall said during a committee meeting. “I think that maybe needs to be updated.”

Others representatives are concerned about how the UC can ensure that organizations are being honest when they request and spend UC funds.

Nonetheless, without a change in funding rules, the committee is required to adhere to the existing policy.

“If we can’t work within the rules, there’s no point in having them,” Greenlaw said while discussing the committee’s policies. “I’m trying to be a rules-based organization.”

Still, Greenlaw has made communication a key priority of the Finance Committee, and expressed a willingness to assist groups that are hurt when the UC’s communication is inadequate.

“If we don’t give you proper information, then you’re eligible for redress of some sort,” Greenlaw said.

On Feb. 21, Levine published all of the Finance Committee’s records dating back to the fall 2011—including data on all grant requests and funding allocations—on the UC’s website. The website notes the UC’s commitment “to being accountable and transparent with students.”

“The accounting used to be a little bit dodgy over the past,” Greenlaw said during the UC’s first general meeting of the year. “There’ll be a lot of changes this semester… It’s going to be quite wicked.”