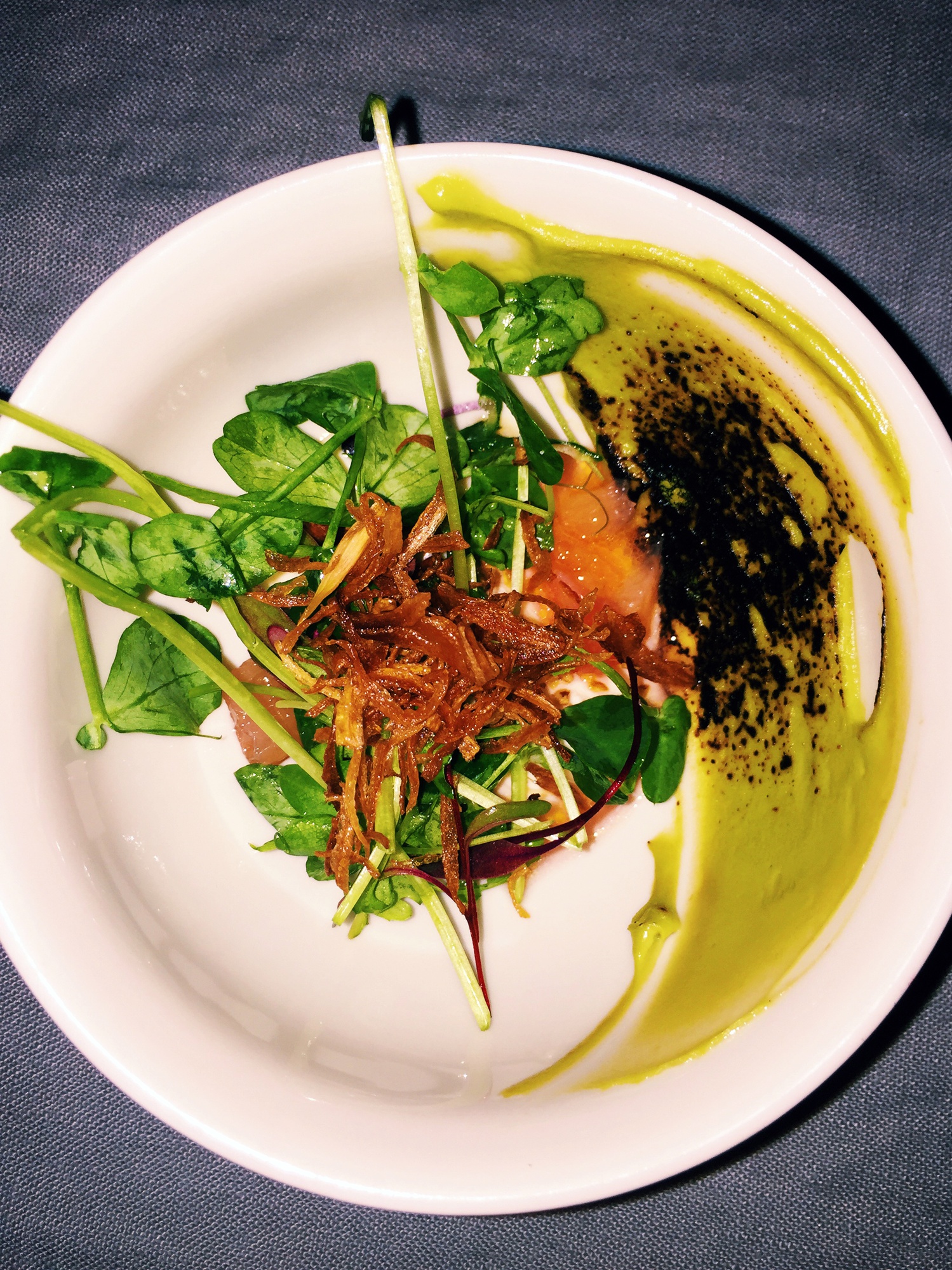 The first course of the night is served, a one-bite “snack” of daikon (a type of radish) pickled in a mostarda and wrapped up in mini taco form with Italian goat cheese and powdered soybean. Eyes widen around the table as we begin to realize what’s about to come out of Friedman’s makeshift kitchen.
By Emma C. Scornavacchi

In a second floor apartment in Central Square, music is blasting and the table is set. The small dining area is beginning to fill with people. Eleven serving boards made of tree bark lie out in the kitchen, each already allocated its portion of homemade bacon-infused butter with brown butter solids. By the second course, a puffy, flaky popover and a scoop of homemade strawberry jam will top each board.

This is Theory Kitchen, an innovative pop-up dining experience started by recent Tufts graduate Theo P. Friedman. Friedman wrote his senior thesis on the separation in traditional food sourcing between those who make food and those who eat it. Less than a year later, he is putting his research to work.

Based in New York, Theory Kitchen hosts multi-course, no menu, experimental dinners in various cities, popping up in friends’ apartments and borrowed venues to provide diners with an intimate, exciting, and novel experience. 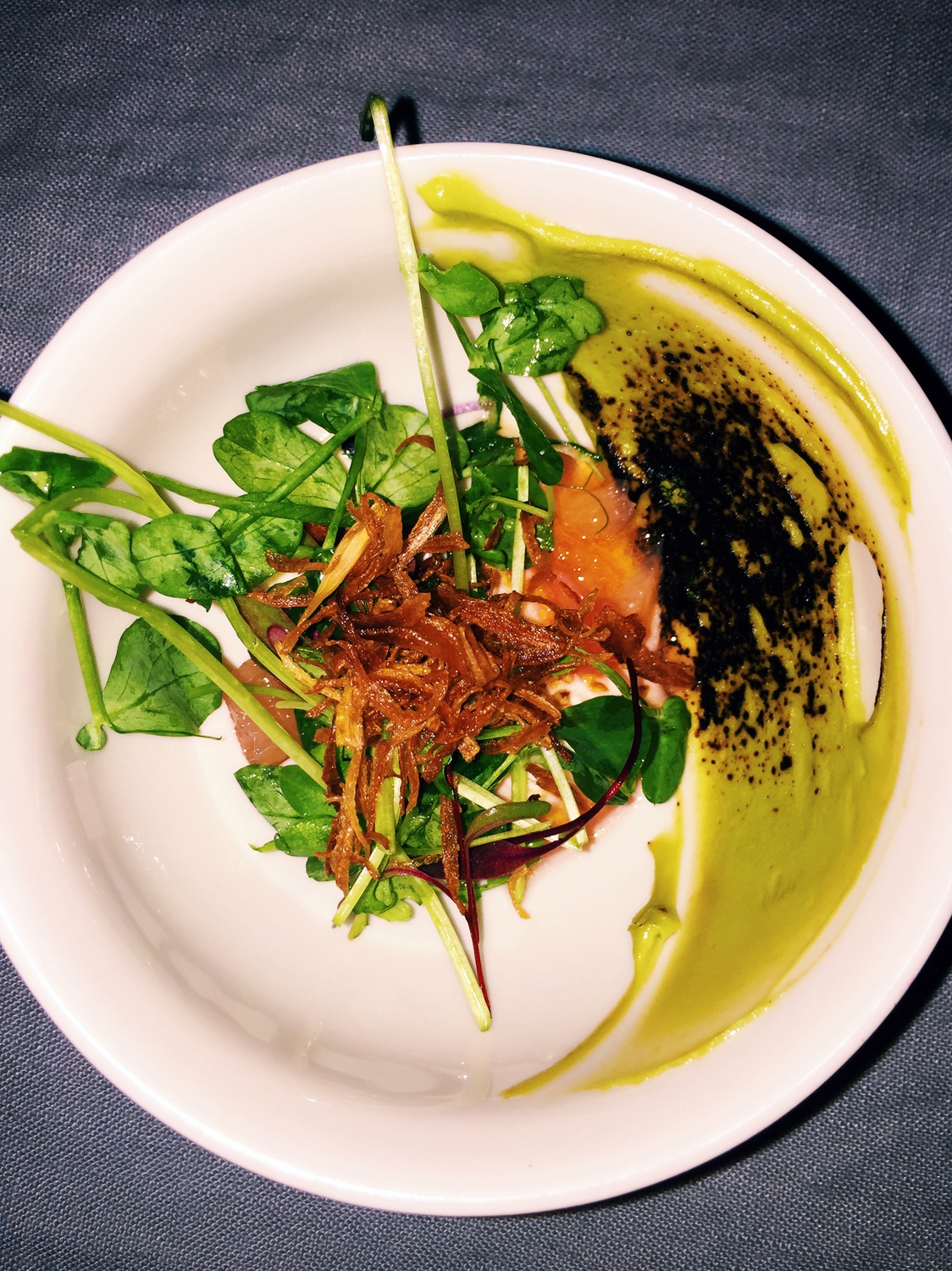 The collection of diners at this particular pop-up, held in the apartment of Friedman’s co-chef Nick Dynan, range from Tufts students, to a childhood friend of Friedman’s, to a food blogger alerted to the event via email. The meal will be ten courses, and the price tag is $80 with an extra $45 added for the drink pairing, a small fraction of what a 10 course meal featuring ingredients of this quality would cost in a restaurant.

The food blogger tells the group that he’s working on a cookbook centered around tater tots. “No tots tonight!” Friedman calls from the kitchen with a grin, moving at a fast pace as dinner starts to come together. “You still have time to leave,” he says. Everyone laughs.

Pop-up restaurants are popular with young, adventurous chefs looking to experiment without the constraints of a traditional restaurant—they take the hip foodie cue from food trucks.

The first course of the night is served, a one-bite “snack” of daikon (a type of radish) pickled in a mostarda and wrapped up in mini taco form with Italian goat cheese and powdered soybean. Eyes widen around the table as we begin to realize what’s about to come out of Friedman’s makeshift kitchen. The courses come at an impressive pace, giving guests just enough time to carry conversations and learn about each other before being presented with yet another masterpiece.

Nothing about this meal is simple, yet somehow each dish’s flavor is so fluid and satisfying that nothing overwhelms. Course number three is a black garlic donut with a yuzu-kosho/black garlic aioli filling topped with fresh uni (the only edible part of a sea urchin) and yuzo kosho paste. “One bite!” Friedman announces, and the crowd follows suit.

The food is as creative as it is delicious. Later in the meal, Friedman and his team serve a bowl of whipped feta, ancho chili, herbs, and burnt avocado puree—but not before burning the avocado puree with a blowtorch. Theory Kitchen is no stranger to extreme cooking: Blowtorches, immersion circulators, and ISI canisters are all tried-and-true devices.

Towards the end of the meal, they serve a chicharron dulce de leche version of a rice crispy treat. It is rare to find any sort of interaction between chicharron (generally pork rind) and something as innocent as a rice crispy treat, but it’s becoming increasingly clear that the unexpected is the norm here.

Most recent college graduates aren’t spending their time drawing daily connections between food and art, but for Friedman the combination was inevitable. Both of Friedman’s parents are artists, and he says that “all of my memories are food.” Though he can’t pinpoint a moment he decided he would go into the culinary business, it seems as if he naturally arrived at this outcome. “Within a very brief period of time, I fell down an obsessive hole of cooking,” he says.

When the meal is over, Friedman and his team sit down with the guests and pour a glass of wine. They toast to the completion of the meal, their fourth and last of their weekend in Boston, and chat with diners. Despite the ambitious and exploratory nature of the meal, Friedman is casual and humble.

Friedman remarks more than once while cooking the meal how much fun he’s having, later telling diners that a plus side of owning his own restaurant would be getting to do this every night. He notes the importance of “making sure the people who are cooking the food… are just as happy to be there, just as psyched to be a part of it, as the people eating the food.”

This philosophy is evident as Friedman moves around the kitchen, cooking to the beat of the music that’s shifting from hip hop and rap playlists to Justin Bieber’s “What Do You Mean?” Every meringue, scallop, and microgreen is not only cooked to inventive perfection, but also deeply connected to those preparing it.

“Food is my language,” Friedman says. He seems to be fluent.