Late Comeback Effort Not Enough for Men's Lacrosse at Albany 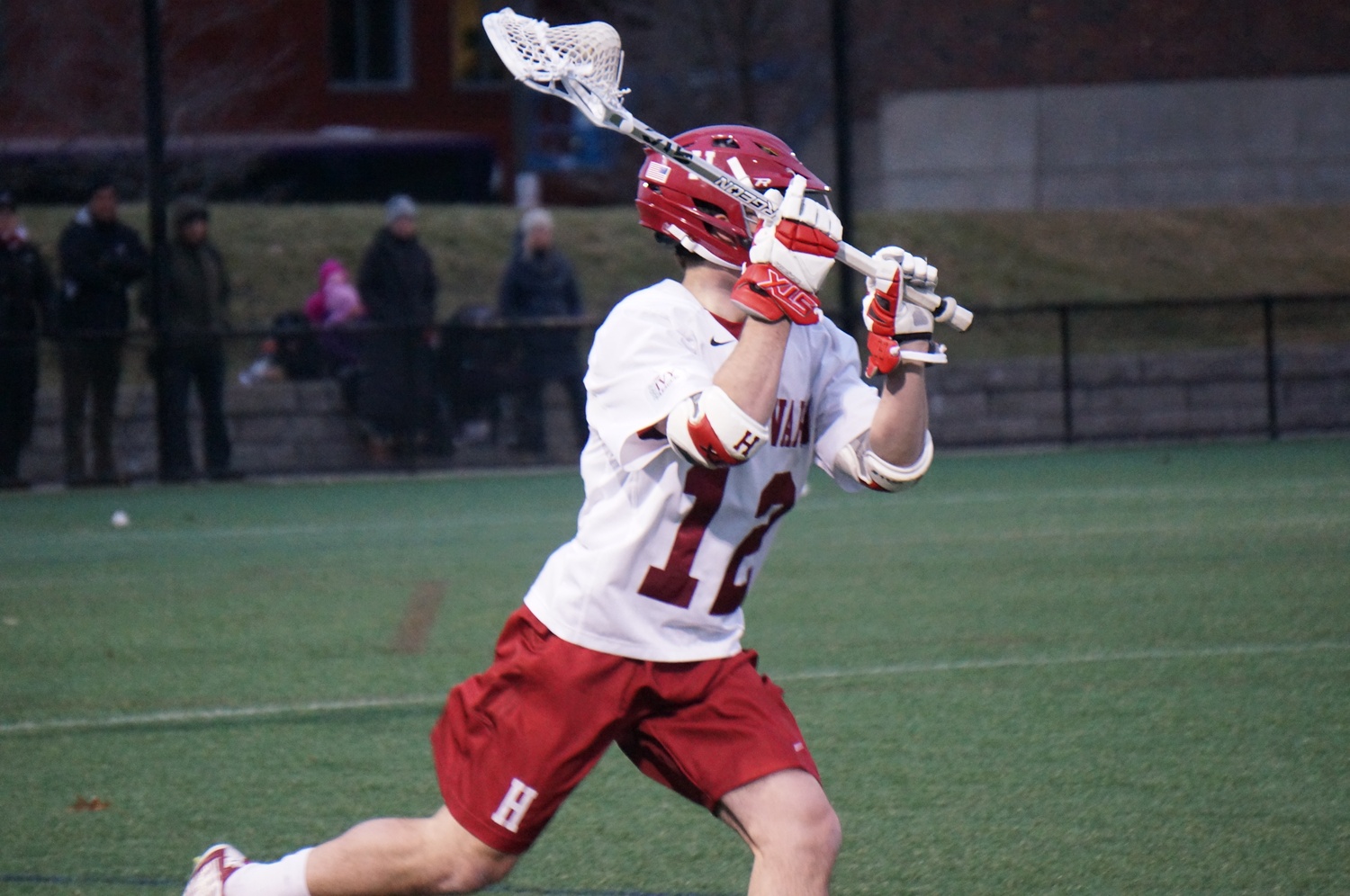 Sophomore midfielder Carney Mahon and the rest of the Crimson fell to Albany, 10-9, on Wednesday night. By Ryosuke Takashima
By Rena Simkowitz, Contributing Writer

Looking to secure consecutive wins for the first time in almost a month, the Harvard men’s lacrosse team found itself trailing against No. 9/10 Albany, 10-7, with less than four minutes to go. Senior midfielder Sean McDonagh pulled one back for the Crimson and his classmate, attackman Will Walker, added another to close the gap to 10-9 with 1:51 remaining.

Senior long-stick midfielder Matt Ryan regained possession for the Crimson with a ground ball pickup, giving Harvard a last chance in front of goal to tie the game. With one second remaining, Walker released a shot from the crease, but Albany senior goalkeeper Blaze Riorden recorded his 18th save of the contest to give the Great Danes the 10-9 home victory.

Harvard (5-5, 1-1 Ivy) falls back to .500 with four games to go this season, all in conference. The Wednesday night matchup against Albany marks its final midweek tilt. Albany (6-2, 2-0 America East), meanwhile, was able to extend Its winning streak to three with the victory over the Crimson.

The Great Danes’ successful gameplan began with containing Harvard attackman Devin Dwyer, who was recently named the Ivy League Player of the Week. The senior entered Wednesday’s game ranked second in the NCAA in points per game with 5.33, but the Albany defense keyed in on him throughout the game, limiting him to two assists and no goals. It was the first time all season that Dwyer did not find the back of the net.

“If a team spends all their energy trying to stop one guy, everyone else has to step up,” said midfielder and co-captain Sean Mahon. “Not enough of us did that tonight.”

Coleman scored on a bounce shot from 12 yards out following a skillful dodge to his left, and Lang made two quick runs at the crease before successfully getting in front of his defender and in a position to get the ball past Riorden to close the deficit to one.

With only two seconds remaining in the first half, however, Albany sophomore attackman Justin Reh scored his second goal of the game to give the Great Danes a 5-3 advantage and a boost of momentum heading into intermission.

“Their offense, for a few years now, has been one that’s hard to keep up with,” Harvard coach Chris Wojcik ‘96 said. “They have several guys who can make plays at any spot on the field at any time.”

For the first seven minutes of the second half, solid defense and impressive goalkeeping on both ends prevented either team from scoring. At the 7:37 mark, after three wide shots, Albany took advantage of its man-up situation and found the back of the net.

After the Great Danes’ goal, Albany continued to control the flow of the game by winning five of six faceoffs in the quarter, pushing its lead to 8-5 going into the fourth.

“We didn’t have a great game at the X, but [Sullivan] showed some improvement, especially at the end,” Wojcik said. “It’s an area we’ll continue to work on.”

The final quarter started out much like the third, with five minutes of back and forth play and no scores. Lang scored his second goal of the game, setting the tone for the Crimson’s final push.

Harvard’s offense dominated the final ten minutes, outscoring Albany 4-2 and picking up six ground balls, but the game ended before the Crimson could tie the score.