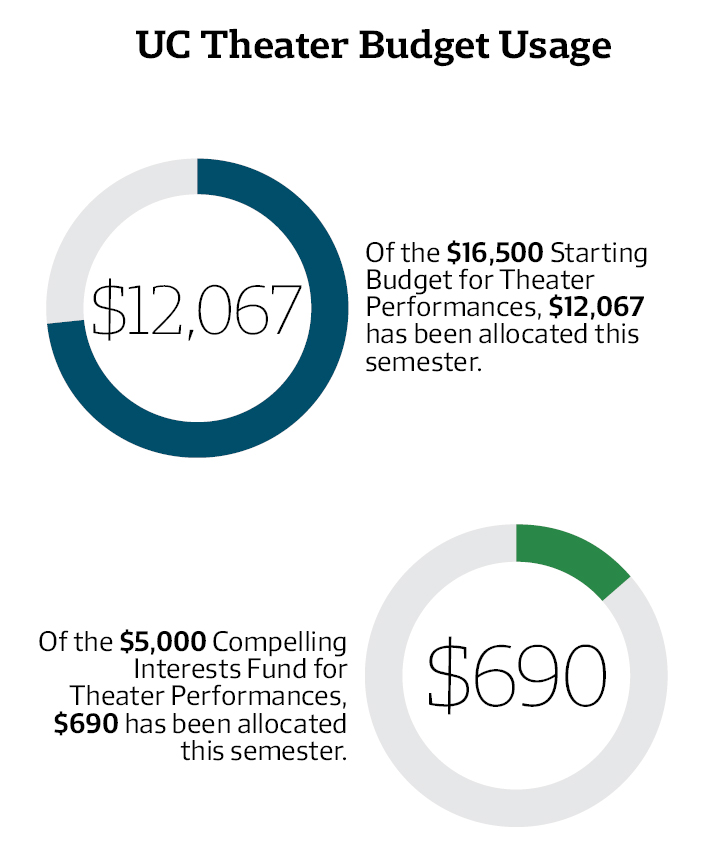 The Undergraduates allocated portions of its budget to theater groups this week.
By Brian P. Yu, Crimson Staff Writer

In response to controversy over a recent cap on theater organization funding, the Undergraduate Council’s Finance Committee passed a communications bill Wednesday aimed at keeping the student body informed of the committee’s policies and activities.

Finance Committee chair William A. Greenlaw ’17 proposed the legislation, entitled the “Undergraduate Council Finance Reform Ordinance of 2016,” to address concerns over what some theater organizations had called a lack of adequate communication from the committee.

The legislation follows a controversial policy passed last week that led leaders of theater organizations to criticize the Finance Committee for failing to inform or consult theater groups first. During Sunday’s UC general meeting, Harvard-Radcliffe Dramatic Club president Aislinn E. Brophy ’17 said her club was “disappointed with the lack of communication this semester.”

Greenlaw also pointed towards the declining number of grant applications since 2014 as another indicator that communication from the Finance Committee needed improvement.

The Undergraduates allocated portions of its budget to theater groups this week. By Brian P. Yu

Under the new legislation, the Finance Committee will establish and maintain a “Communication Channel” with all presidents and treasurers of Office of Student Life-recognized clubs, in order to ensure that student organizations are informed about changes to financial policy.

“I’ve already gone to the OSL,” Greenlaw said. “I’ve added every single treasurer on campus [to a list]. Two hundred and thirty two new treasurers have been added, roughly 500 presidents have been added.”

The legislation requires the Finance Committee to make a “good faith effort” to reach out to consult student organizations that may be affected by new financial policy before the committee votes on a final policy. The committee will also commit to setting dates for grant hearings at the beginning of the semester, so that relevant organizations can plan ahead.

The bill also includes a provision for “bilateral budget negotiations” between the Office for the Arts, the Finance Committee, and theatrical organizations at the beginning of each semester. Greenlaw said the negotiations would help theater organizations plan their semester productions in advance by giving them a better idea of how much funding to expect.

During the meeting, the Finance Committee also allocated more than $10,000 in grants to several theater organizations, including the HRDC, BlackCAST, and Science Theater at Harvard College.

“Our Voices,” a show produced in collaboration with the Office of Sexual Assault Prevention and Response, addresses sexual assault, and “Glory” focuses on the topic of mental health.

UC representatives debated last week whether the new fund for theater groups would lead to the Council evaluating and endorsing the content of some productions over others. At the Finance Committee meeting Wednesday, Brophy, who has previously objected to the new compelling interests fund, said she worried that providing financial incentive for some productions over others is “coercive.”

Under the original legislation, theater productions that aligned with the Council’s compelling interests could receive up to double the funding they originally requested from the Finance Committee. In response to concerns over the new grant, Greenlaw said the Finance Committee will now use the compelling interests fund only to allocate money to qualifying productions that did not receive their full requested amount.

The two productions together received $1,885 from the Finance Committee, out of the $2,389.60 they were potentially eligible for under the legislation.

“We’re going to administer the policy in a non-coercive fashion by giving them up to what they requested,” Greenlaw said.

The committee voted unanimously to pass both the grant allocation and the communications reform during the meeting.

“This adds a lot more communication and it also addresses the most relevant stakeholders so that we don’t have this problem again,” Greenlaw said. “I think it’s a very good move.”