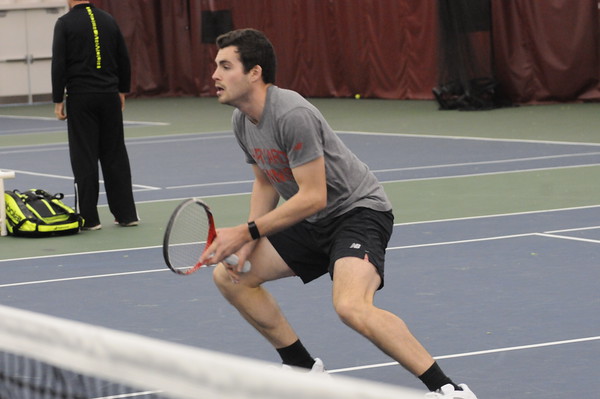 After an up and down season, the Crimson is looking to start its conference slate on a high note. After finishing second in the Ivy League last year, Harvard is looking to come up with big wins against rivals Columbia and Cornell this weekend to take an early lead in conference standings. By Leah Y. Doherty
By Jamie Chen, Crimson Staff Writer

Last year, the Harvard men’s tennis team entered Ivy League play at a comfortable No. 36 in its opening weekend against No. 55 Cornell and the defending Ivy Champion, No. 28 Columbia. In a hotly contested pair of matches, the Crimson split the weekend with a win over the Big Red and a loss to the Lions.

For a chance at redemption against the Lions and to start its conference season on a strong note, Harvard will need to learn from its otherwise rocky season and harness the momentum from its past three victories.

“Especially in the last few weeks a lot of the guys have been playing really well and playing the right way,” freshman Andy Zhou said. “Our performances have been in line with what we expect, and I think that momentum and that positivity will be very important going into the rest of the season.”

The Crimson began its 2016 season with high hopes after ending its strong 2015 season just short of the Ivy League Championship title, finishing in second place with a 19-7, 5-2 record. Since then, however, the team has seen inconsistent results on the court, struggling to secure doubles points and seeing its ranking drop from No. 32 in preseason play to a season-low No. 50 last weekend.

Quite a bit changed last weekend, however. After a streak of unsuccessful efforts over spring break, the Crimson ended its time in San Diego with a decisive 4-1 victory over San Diego State. Back at home, the team overcame a tough double-header on Easter Sunday to upset Old Dominion 4-3 and handily take down Amherst, 5-2.

“We have had matches this season where we have had good individual performances, but we haven’t all played well too often. If we can keep committing to our games, we can definitely have a lot of success going into Ivy League play,” freshman Chris Morrow said.

This upward trend comes at a critical time for Harvard, as it will face tough competition in the Ivy League. The Crimson is currently fourth of the five Ivy teams ranked by the ITA, behind Columbia, Princeton, and Dartmouth.

Though Cornell, which the Crimson will play on Saturday in Ithaca, N.Y., is coming off a loss, the Big Red won Harvard and Cornell’s most recent matchup in the semifinals of the ECAC Indoor Championships this past February.

Since then, however, Vinti has accumulated a team-leading eight singles victories, and will undoubtedly be a tough matchup for Harvard. Vinti enters the weekend with five wins in the past six matches, including the lone point for Cornell in its matchup against Columbia last weekend.

Columbia has won three of its last four matches and has bested the Crimson in season openers for the past two years.

The Lions senior Mike Vermeer leads the team with a 13-2 singles record, and No. 64 Lions junior Shawn Hadavi will also prove a threat. In a close three-set matchup last spring, Hadavi was just able to best Harvard’s then-sophomore Brian Yeung.

An added challenge this weekend on top of the highly competitive teams will be the disadvantage of playing away.

“To compete against not only the opponents directly across from you but also the home crowd is definitely something that we’ll have to take into account,” Zhou said. “We’ll have to be level-headed and make sure to manage all the environmental factors that could throw off our focus.”

Despite the opposition’s home court advantage, Harvard enters the weekend with confidence.

“Going into Ivy season we have a pretty strong assembly of doubles teams again and I have a lot of faith in the guys that we have playing singles,” Zhou said. “Personally, I’m very confident in the way I’ve been playing and I know what I need to do. All the tools are there, all the parts are set up, we just need to go out there on the court.”

—Crimson staff writer Jamie Chen can be reached at jamiechen@college.harvard.edu.