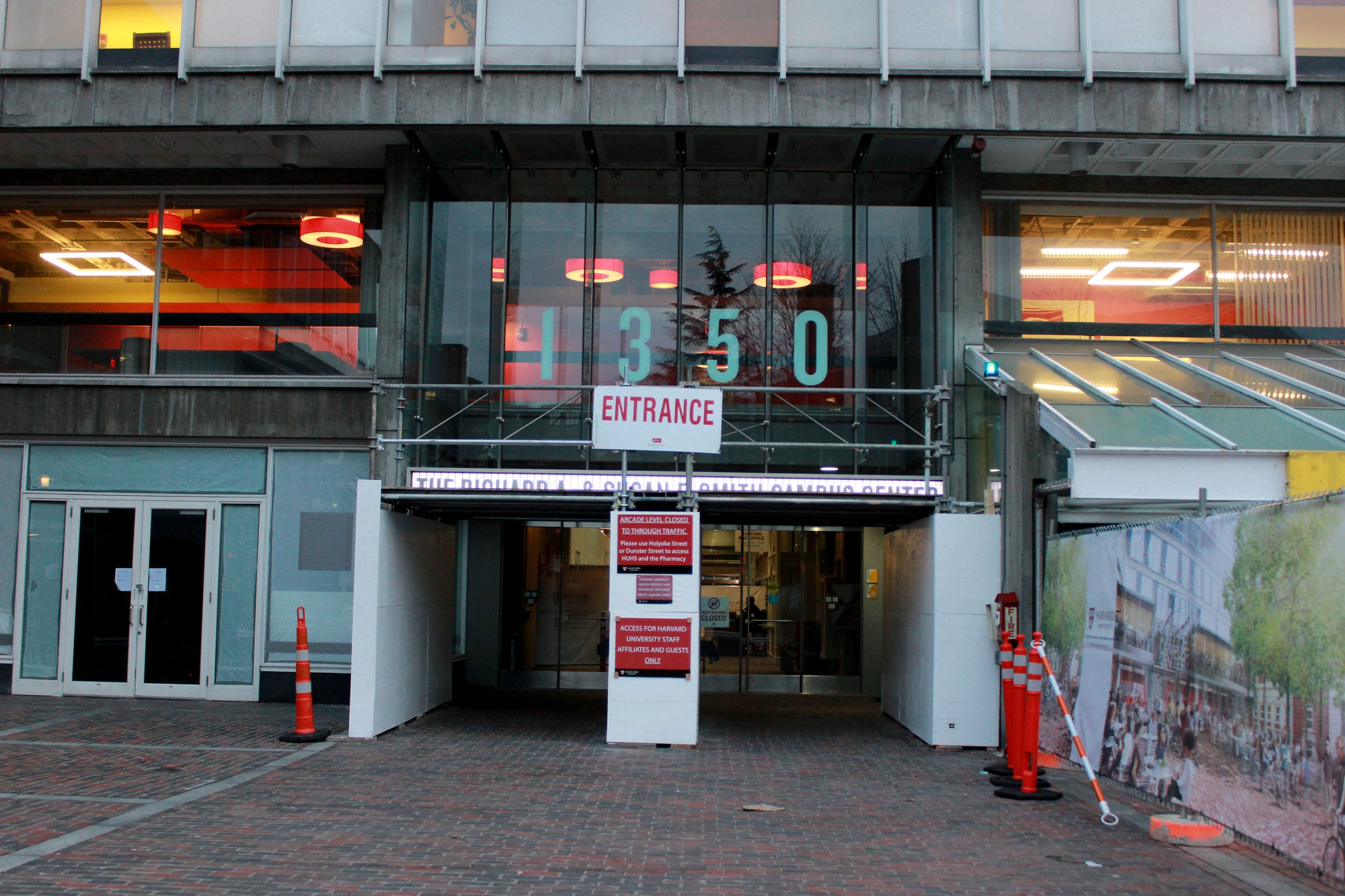 Construction continues on the Smith Center, with various amenities unavailable for use.
By Joshua J. Florence and Theo C. Lebryk, Crimson Staff Writers

Posters inquiring “Who took our space?” and “Where is Brian?” littered the temporary construction fences surrounding the Smith Campus Center this weekend as part of a Harvard Graduate School of Design student’s efforts to start a conversation about how current renovations may affect life in Harvard Square.

Keebaik Sim, a student in the GSD’s Art, Design and the Public Domain program, spearheaded the poster campaign. He said his goal was, in part, to remind those frequenting Harvard Square that the plaza is a home to many homeless individuals. One such person was an acquaintance of Sim’s, whom he called Brian.

For an art project last semester, Sim created a video documenting Brian’s life as a homeless person in the Square. 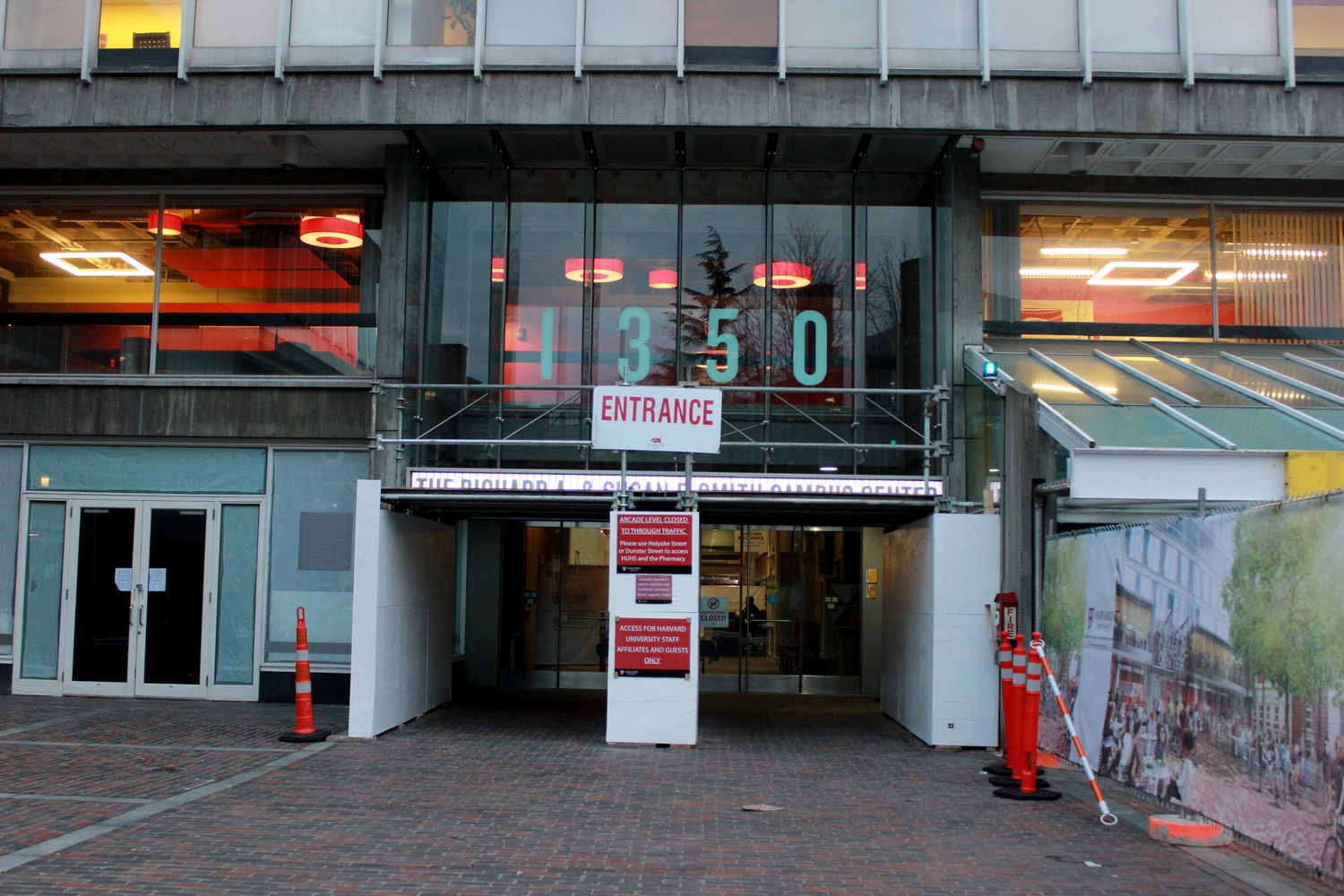 Construction continues on the Smith Center, with various amenities unavailable for use. By Savannah I. Whaley

“I decided to do a project relating to this person who is sitting and staying here for 23 years,” Sim said. “This person also has a culture, which is different from us but can be respected. It’s not an inferiority, but it’s just a difference.”

Sim said he worried the construction may have adverse effects on the local homeless population. Having not seen Brian since November, Sim wondered if the renovations may have forced him and other homeless individuals to leave the space outside of what was formerly Au Bon Pain.

“This is their cultural place and also a home for them,” he said. “Where are all of these people going to go?”

For Sim and other design students, the renovation could pose problems not only for homeless people but for individuals who use the space often, like students.

“Community is important, so it makes sense that there would be a concern if the renovation is going to change what has always been there,” Bryan Yang, a GSD student, said. “Without that, without public space, without gathering, how are you supposed to form social bonds beyond just the ones you have with classmates?”

However, Brigid O’Rourke, a Harvard spokesperson, stressed that the fences and renovations are only temporary.

“While we regret the temporary inconveniences that the construction may cause members of the Harvard community and our neighbors, we have incorporated various contingencies regarding many of these changes,” O’Rourke wrote in an email. “We look forward to the project’s completion when members of the public will have even more access to the building and its amenities than they did in the past.”

The posters, which have since been taken down, also asked Harvard Square visitors to share their memories of the Square by sending an email to a designated gmail address. Sim said he even reached out to Matt P. Damon ’92, albeit unsuccessfully, for a story about "Good Will Hunting," a movie in which Damon starred that partially took place in the Square.

“I just wanted to collect stories about this place that people are familiar with,” Sim said. “I’m very sure that [Matt Damon] has a specific story.”

The Smith Campus Center renovations are scheduled to take place from now until the fall of 2018, when the building is scheduled to reopen to the public. Current construction updates can be found at construction.harvard.edu.