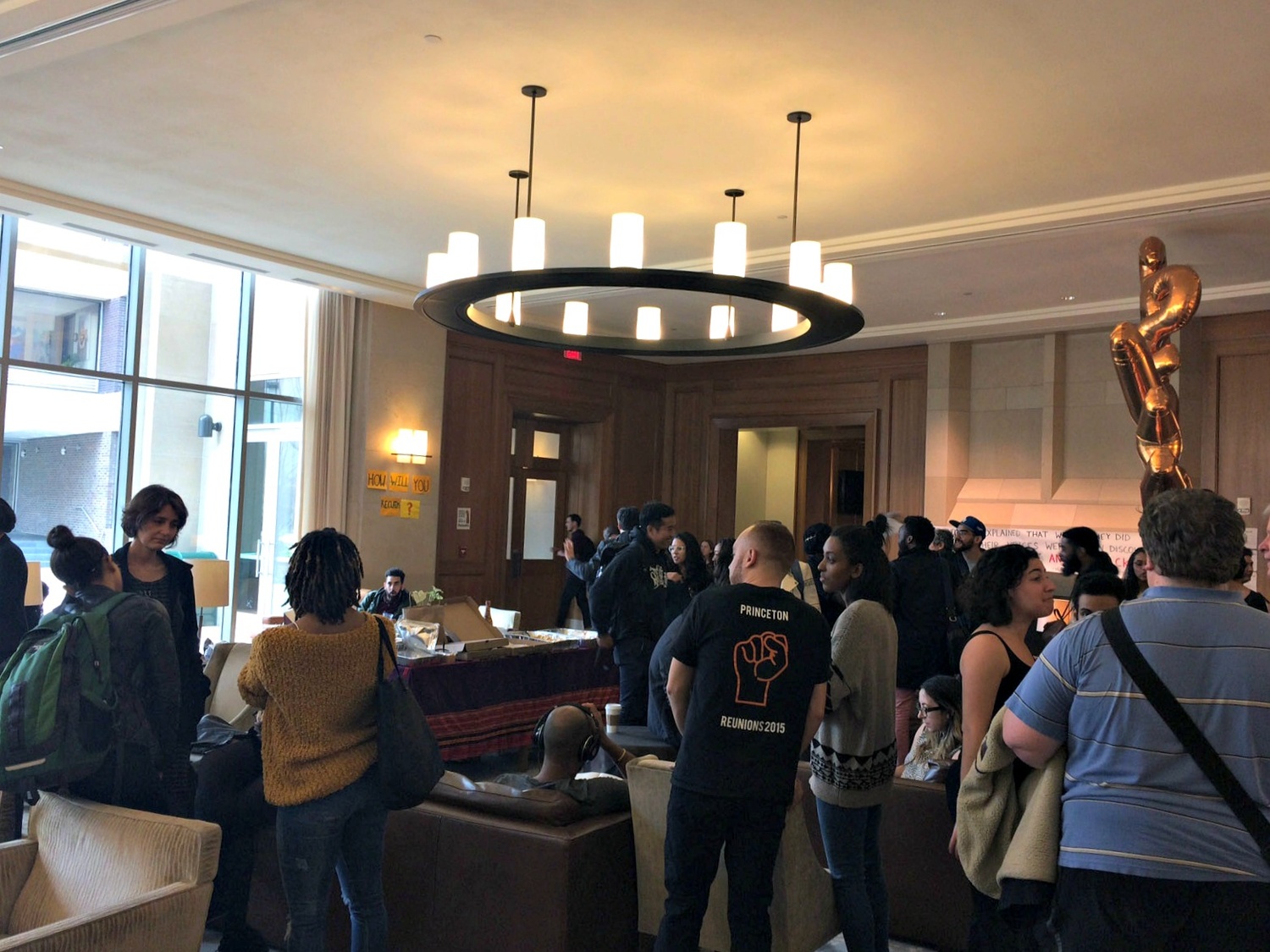 Tensions flared in a standoff between activists and opposing students at Harvard Law School Friday as an intensifying debate that began over posters evolved into one about rights to space and free speech on campus.

Barlow said he originally intended for the posters to publicize his concerns that Reclaim Harvard Law has had a “chilling effect” on speech at the Law School. Activists have been occupying the lounge, which they call “Belinda Hall,” since February as part of their efforts to create a space they say does not exist for minority students at the school. Barlow has spoken out publicly against the occupation and activists’ demands, which include changing the school’s now-defunct seal and creating a critical race theory program, an idea he has called “racist.”

Barlow claimed Both Trump and Reclaim “support the suppression of dissent, and, to a certain extent, both of them support or endorse racist ideologies.” Barlow put up posters that read “Reclaim Harvard Law = Trump.”

Reclaim Harvard Law member Rena T. Karefa-Johnson said activists decided to remove the posters they considered to be offensive, in part because the Muslim Law Students Association held a conference in the lounge the day Barlow put up signs referencing Trump.

After activists took the posters down, Barlow appealed to administrators and began a week-long postering campaign in protest, affixing to the walls signs that accused Reclaim Harvard Law of censorship. Barlow maintained that the lounge is a public space where any student is allowed to speak freely. Activists, however, claim that while they have repeatedly invited dissenting students to speak with them, occupying the lounge gives them control of the space. 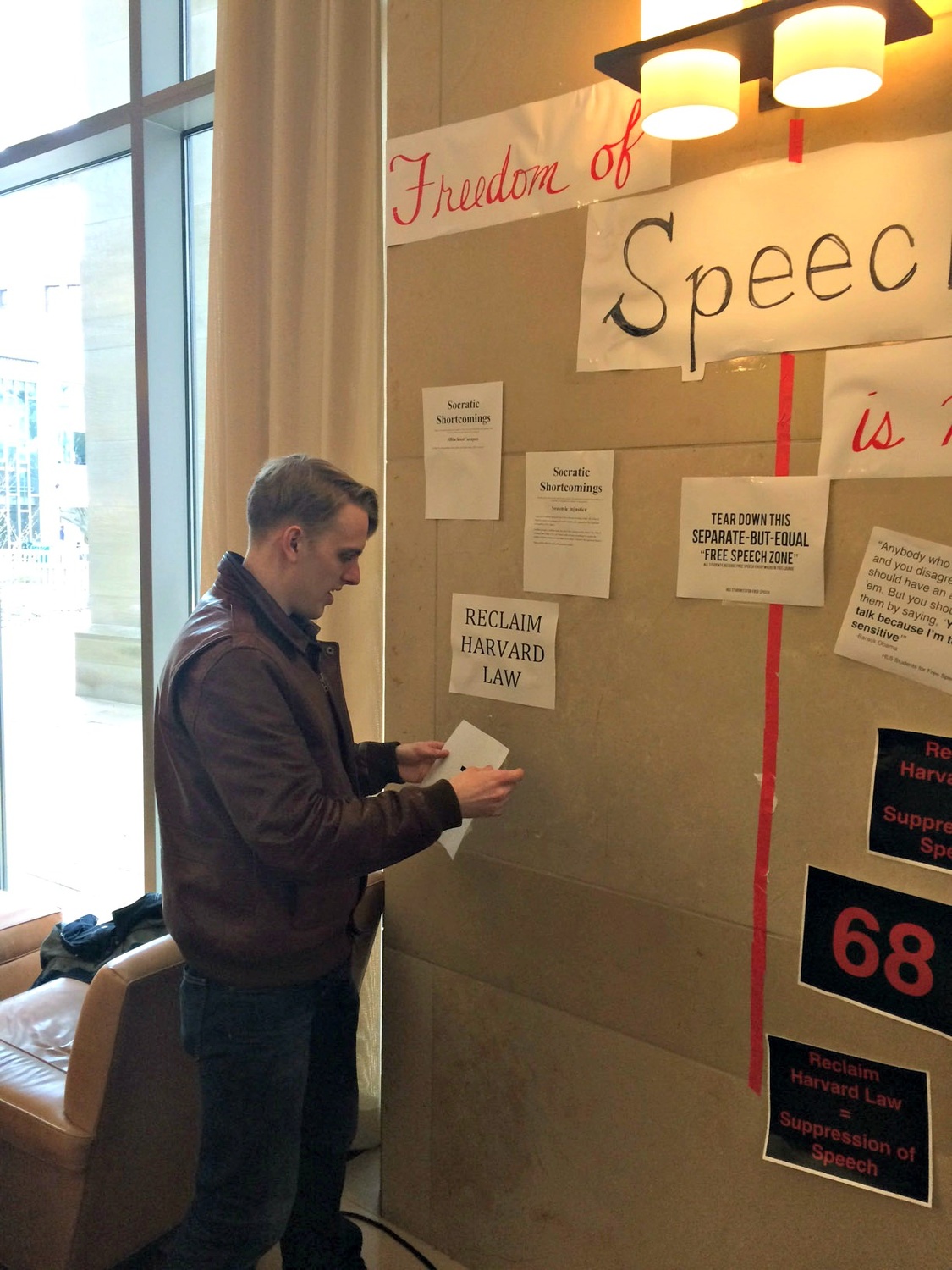 “This is an occupation. This is our space, our house,” Reclaim Harvard Law member Alexander J. Clayborne said. “Let Bill Barlow put up posters anywhere else, just not here.”

The dispute came to a head Friday, when dozens of Law School affiliates filled the student lounge as Barlow and several supporters returned at 2 p.m. to put up another round of signs. Confrontations between activists and dissenting students quickly turned hostile, as students sharply debated both the poster issue and their right to film their opponents in the lounge. Activists did not discard any of Barlow’s signs, but instead moved them to a wall under a sign of their own creation that read “Privilege.” Dean of Students Marcia L. Sells watched the the events unfold and fielded questions from both sides.

Administrators face criticisms from both camps. Barlow met with Sells to voice his concerns earlier in the week, alleging that activists who removed his posters had violated the school’s “Protest and Dissent Guidelines.” Activists, meanwhile, took issue with administrators’ rhetoric and speed of response.

Sells issued a statement to the Harvard Law Record, writing “The University’s and Law School’s commitment to freedom of speech and academic freedom, however, requires that those who use shared space for expressive purposes must respect the rights of others to do the same, including those who disagree with them. These values of free exchange are essential to an academic community.”

Late Friday morning, Law School Dean Martha L. Minow reiterated this message in an email to Law School affiliates, stating explicitly that the lounge was a communal space available to all students, and removing posters is a violation of the school’s Protest and Dissent Guidelines. She wrote that administrators are working to create a designated space for students to post their opinions and provide guidelines to ensure that the space is inclusive. Additionally, the school will “take steps to ensure that students and student organizations have ample opportunities to use space to engage in study, discussion, teach-ins, and other forms of collective speech and action.”

Minow’s reference to a Law School policy prohibiting “[u]sing or threatening force or violence” struck a chord with activists, who interpreted the line as an implication that Reclaim Harvard Law members could turn violent.

“I have been deeply disgusted with the way it has felt like a dog whistle. When have we ever been violent?” Titilayo S. Rasaki, a second-year Law student and member of Reclaim Harvard Law, said.

Barlow, meanwhile, expressed disappointment that administrators have thus far refrained from taking disciplinary action against students who took down his posters earlier in the week and allowed members of Reclaim Harvard Law to relocate his signs on Friday.

The controversy comes at the start of the school’s admitted students weekend, and some prospective students observing the debate unfold in the lounge Friday said that protests at the school will factor into their decision to attend.

Admitted student Paul Maneri said he has been following ongoing activism at the Law School in order to determine how racial tensions could affect his experience there.

“I’ve been trying to figure out if these issues are specific to Harvard—if Harvard is doing things better or worse than other schools–since it seems like [race] has been more of a conversation here,” he said. “I’m wondering if that’s because things are worse here, or if people just care more.”