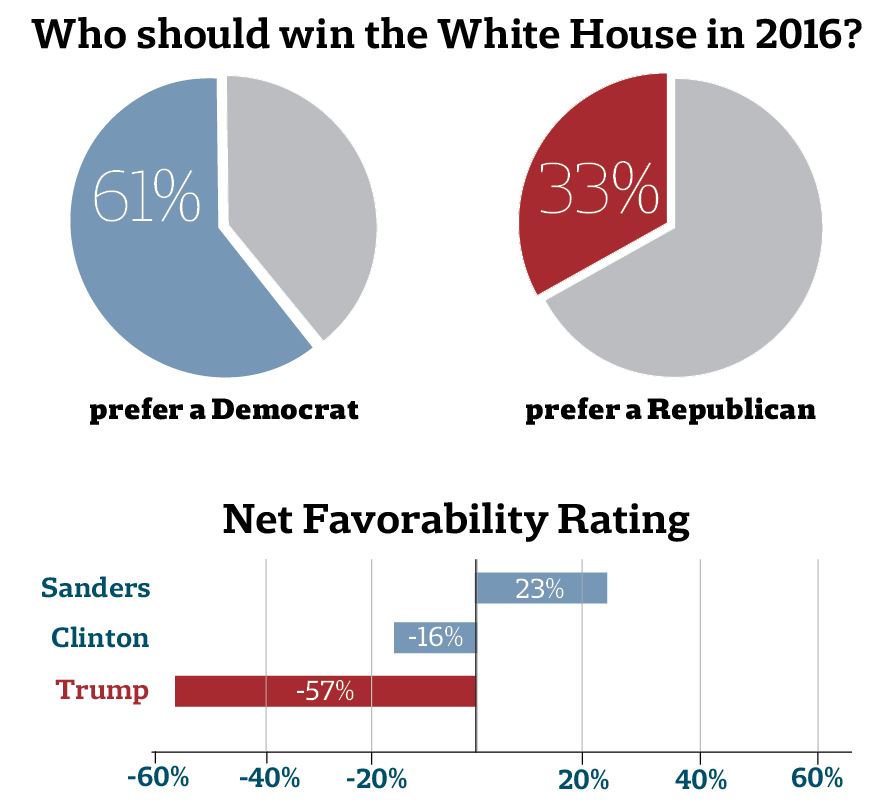 Millennials prefer a Democrat win this year's presidential election, according to the Institute of Politics' Public Opinion Project spring poll.

The poll, which the IOP conducts twice a year, included responses from 3,183 18- to 29-year-olds about their views on politics, with a focus on the current presidential campaign.

The margin of difference between millennials’ preference for Democrats to keep control of the White House and preference for Republicans to win the upcoming presidential election was nearly double that of last year’s poll.

John Della Volpe, the IOP’s director of polling, said one of the largest takeaways from the poll results is millennial support for Democratic presidential candidates.

“The preference for [Democrats to take] the White House increased over last year,” he said.

Bernie Sanders, according to the poll, is the only candidate with a net-positive favorability rating at 23 percent, while Trump’s favorability was negative 57 percent for all survey respondents and negative 20 percent among Republicans. Hillary R. Clinton proved significantly more popular than Donald J. Trump, with the former Secretary of State leading the business mogul by 36 points among likely voters.

Survey respondents also expressed pessimism about the state of the country in general.

Only 15 percent of millennials said they believed the United States is headed in the right direction, and nearly half believed politics are unable to address the challenges currently facing the country.

Despite the lack of faith in the current state of politics, Sonya G. Jacobs ’18, the Public Opinion Project’s student chair, noted that the poll results indicated millennials may seek public service involvement outside of politics.

“Millennials do really care deeply about this country and they want to be civically engaged, but not necessarily through politics,” she said. “One-third of millennials will volunteer for a campaign but far more, 67 percent, would do community service for a worthy cause.”

The poll also reported that millennials think poorly of the country’s criminal justice system. 47 percent of respondents said they have “no” or “not much” faith in the justice system to reach a fair conclusion that does not take into account race or ethnicity.

“[We] got almost identical numbers, so there has seemingly been little change over time for millennials on this issue,” she said.

There was also a gender divide on which presidential candidate would most improve women’s lives. While men preferred Clinton over Sanders by 11 percentage points, 30 percent of women surveyed said they believe Sanders will do the most for women, while only 26 percent chose Clinton.