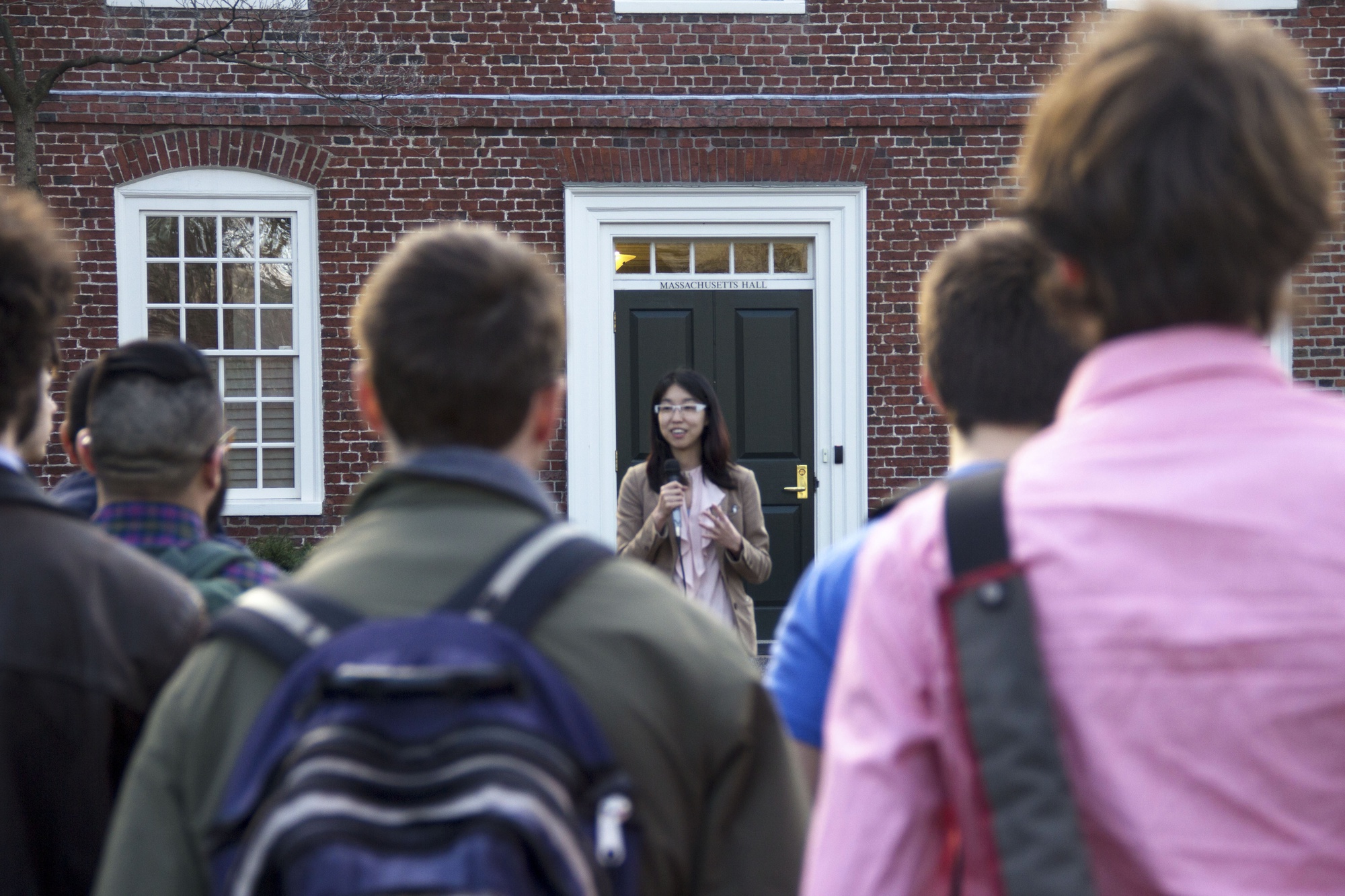 Jean Fan, a Ph.D. student in Biological & Biomedical Sciences at the Graduate School of Arts and Sciences, speaks at a protest outside Massachusetts Hall Friday. The protest was in demand that more steps be taken to increase diversity at the school, which had only eight percent underrepresented minorities in the 2014-2015 academic year.
By Leah S. Yared, Crimson Staff Writer 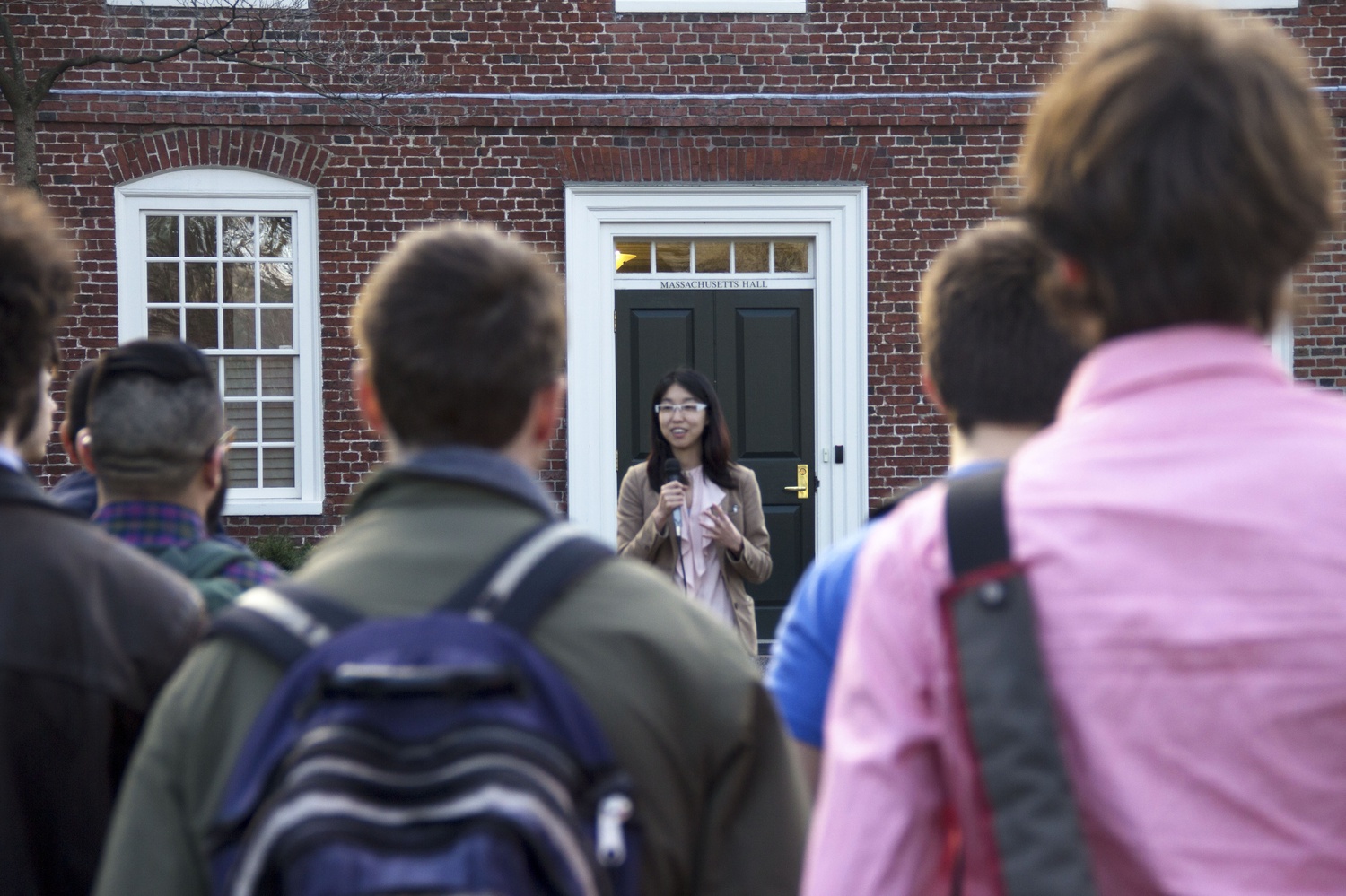 Jean Fan, a Ph.D. student in Biological & Biomedical Sciences at the Graduate School of Arts and Sciences, speaks at a protest outside Massachusetts Hall Friday. The protest was in demand that more steps be taken to increase diversity at the school, which had only eight percent underrepresented minorities in the 2014-2015 academic year. By Annie E. Schugart

The event, organized by the Civil Rights Committee of the unionization effort, brought together speakers from a broad spectrum of racial, gender, and socioeconomic backgrounds outside of Massachusetts Hall. Organizers demanded that administrators address pipeline issues—obstacles that lead to higher attrition rates for underrepresented minorities in doctoral programs.

Felix Owusu, a graduate student and a member of the Civil Rights Committee who led the protest to the crowd of roughly 60 people, spoke about the issues minorities face in graduate education, including academic isolation, lack of a support system, and relatively few minority faculty who can serve as mentors to minority students.

“They told me that I would face isolation here. They told me that well-meaning institutions, even ones that meant the best, would be woefully unprepared in supporting me,” Owusu said, referring to cautionary warnings other minority students gave him about pursuing a Ph.D.

“I would not be up here, where I am today or at this institution, if it were not for a supportive group of graduate student workers who showed me solidarity and prepared me for what I was going to be facing,” Owusu added.

While several students touched on their personal experiences as minorities, graduate student David Nee spoke of his experience coming from a background of what he considered privilege.

Nee said being a “mixed-race man who passes for white” and coming from an upper-middle class family where both of his parents received Ph.D.s from Harvard “cushioned” him against the issues that minority students face.

Owusu said a collective bargaining unit provides a “clear vehicle for change.” In late February, members of the union effort announced that a majority of graduate students employed by the University supported unionization. 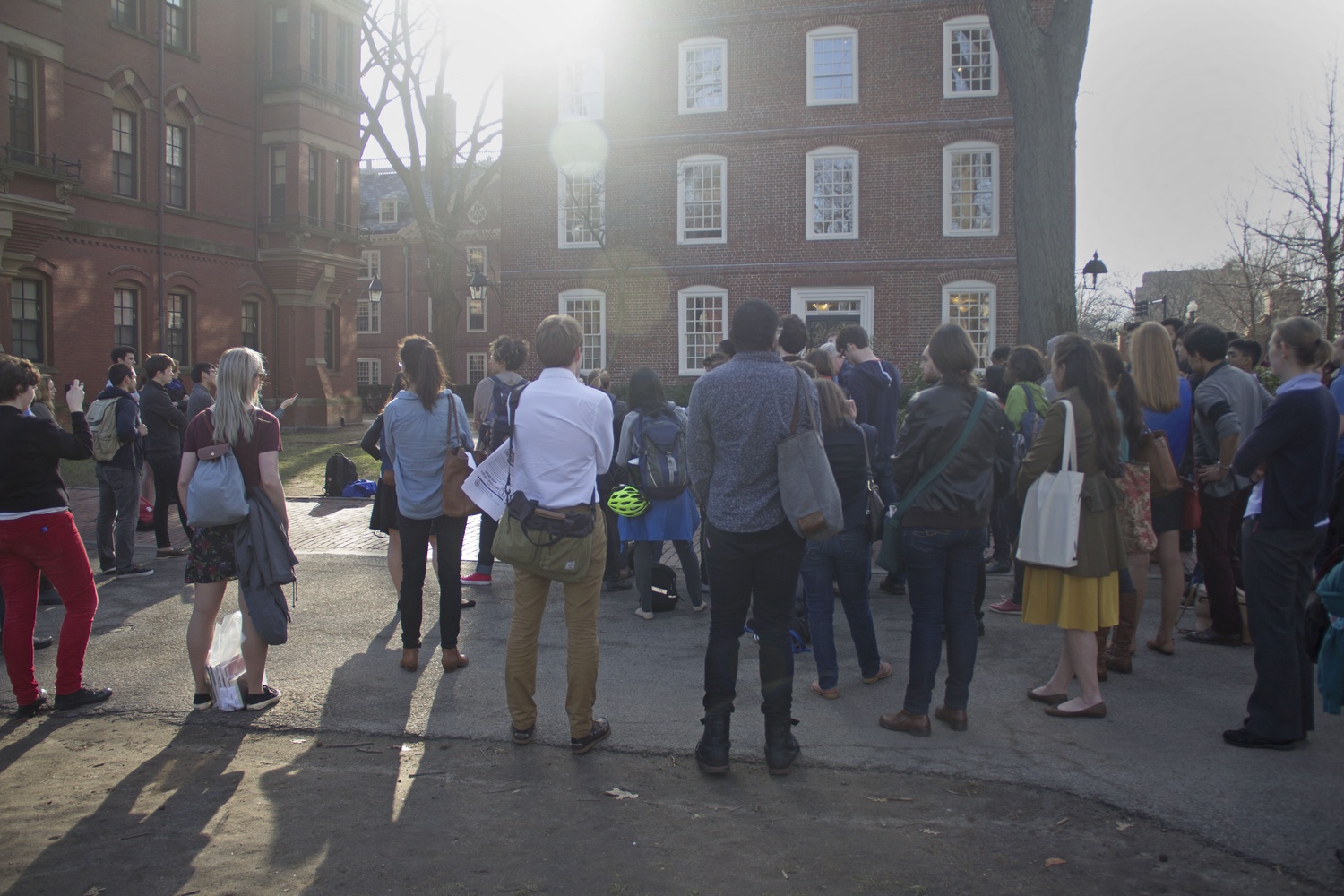 Students from the Graduate School of Arts and Sciences, along with supporters, gather for a protest outside Massachusetts Hall Friday evening. The protest was in demand that more steps be taken to increase diversity at the school. By Annie E. Schugart

The Graduate School of Arts and Sciences administration has sought to increase diversity within the school. In the 2014-2015 school year, eight percent of enrolled students were underrepresented minorities.

“Diversity and inclusivity are central to the mission of GSAS and essential to maintaining the intellectual excellence of Harvard University,” associate dean for academic programs and diversity Sheila Thomas wrote in an email.

Undergraduate student Brianna Suslovic ’16, a member of the Student Labor Action Movement, said visibility is important to show minority students that a doctoral education is possible.

GSAS has created several summer outreach programs in effort to help fix the pipeline, such as the Summer Honors Undergraduate Research Program, which places minority undergraduates in research labs and matches them with graduate students for informal mentoring.

"Our commitment to recruit and mentor a diverse community of scholars in our Ph.D. programs extends back decades,” Thomas wrote. “It continues today with new and enhanced strategies for recruitment, pipeline program development, admissions, and community building to support a diverse student body.”

Owusu said there was no shortage of supporters from diverse backgrounds who wanted to share their experiences at the rally. Dining hall workers, women in STEM, and a at least one member of Reclaim Harvard Law joined the union effort members.

High-energy chants, such as “Harvard fix your leaky pipes, support grad workers of all stripes” punctuated the rally. A few freshmen living in Matthews trickled outside because of the noise.