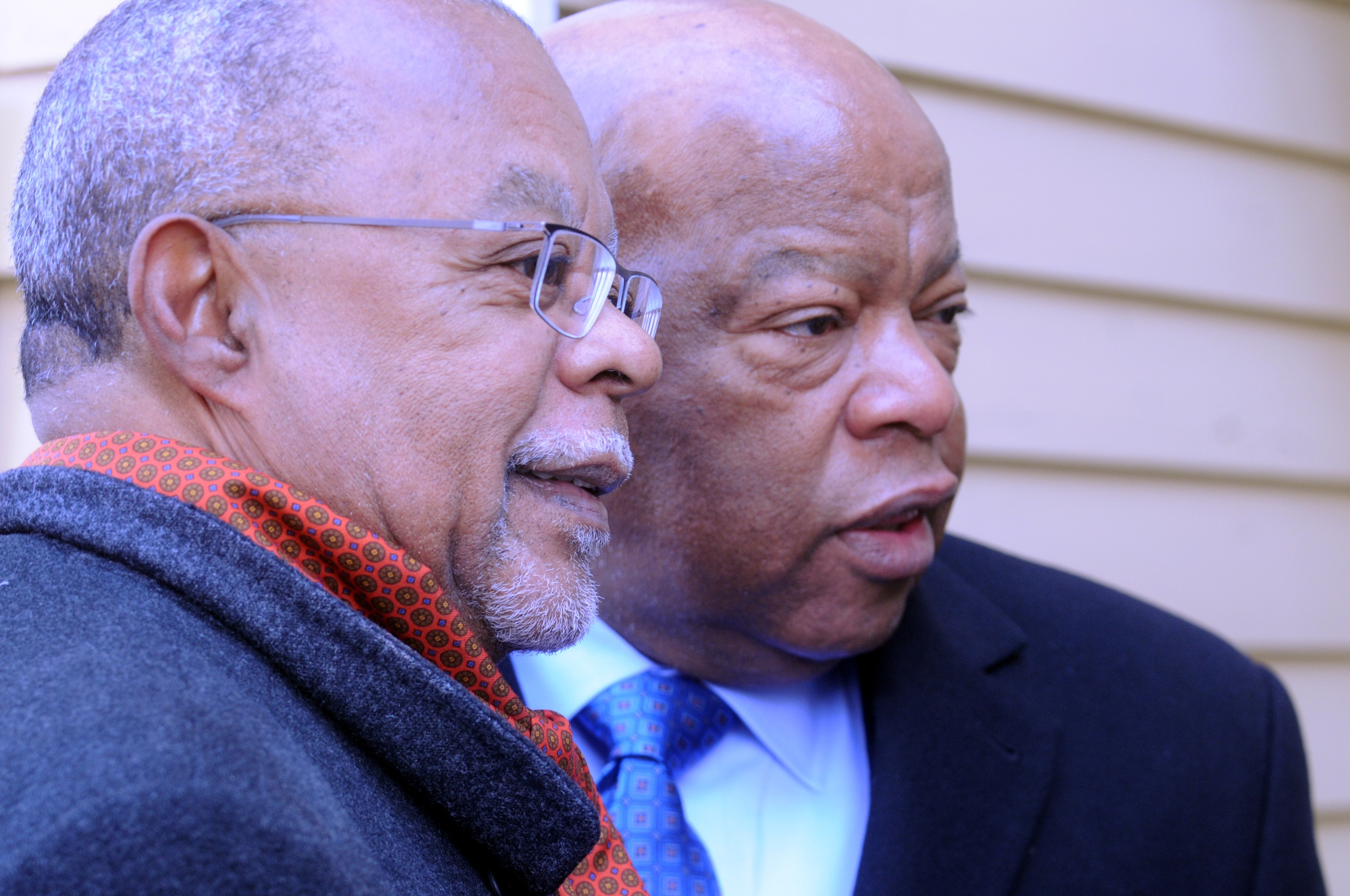 In a stirring ceremony Wednesday, University President Drew G. Faust, joined by Congressman John R. Lewis, remembered Harvard’s forgotten past and dedicated a plaque to four enslaved persons who lived and worked on campus in the 18th century. 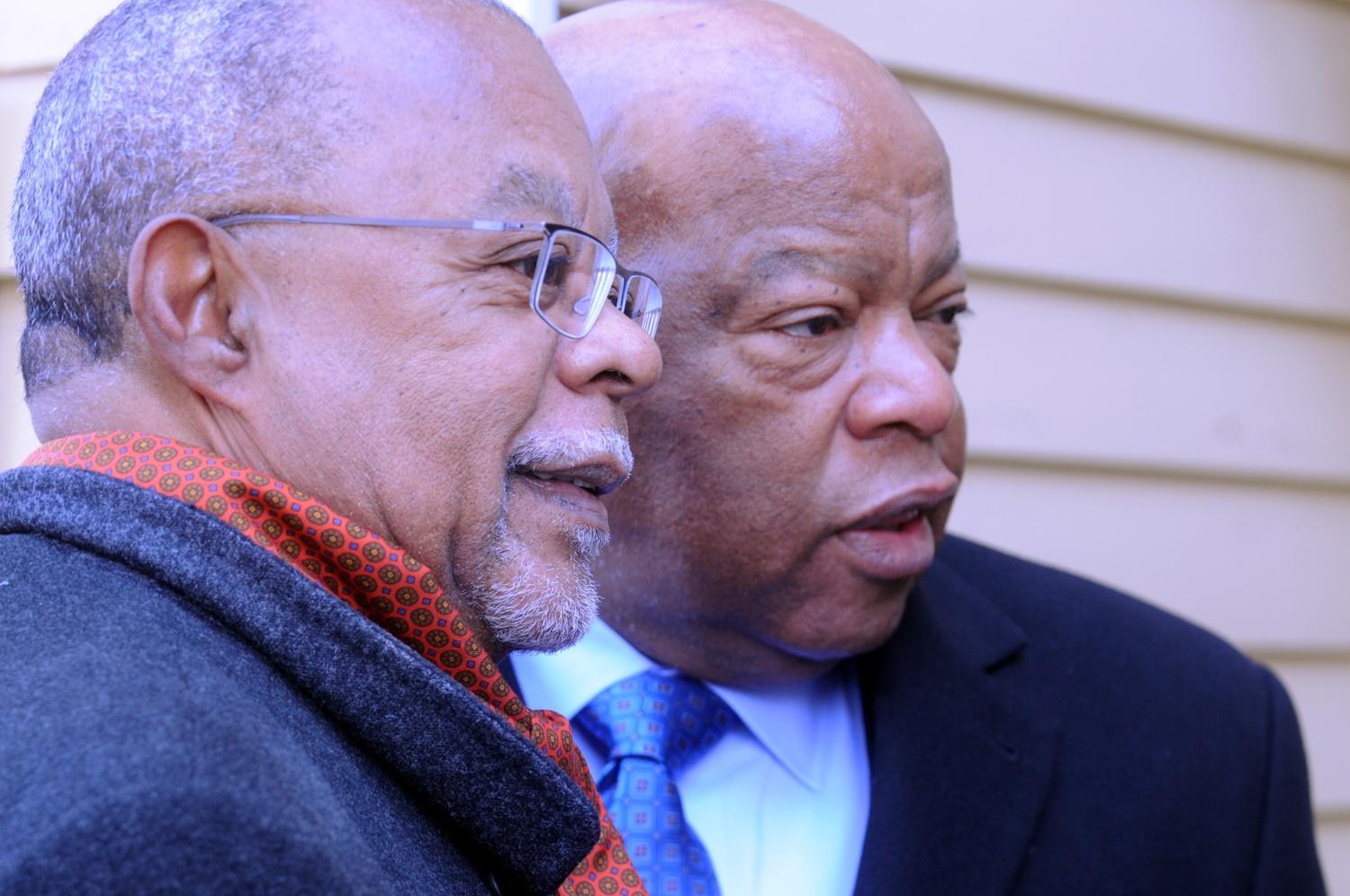 Professor Henry L. Gates, Jr. and Georgia Congressman John R. Lewis celebrate the unveiling of the Wadsworth House plaque. The plaque bears the names of Bilhah, Venus, Titus, and Juba, four enslaved persons who labored in the house in the eighteenth century. By Daphne C. Thompson

Faust and Lewis spoke about the importance of confronting Harvard’s complicity in slavery, drawing a crowd of high-profile Harvard administrators, professors, alumni, and reporters. After a performance from the Kuumba Singers of Harvard College, the group then moved outside to Wadsworth House, where Faust and Lewis unsheathed the plaque bearing the names of Bilhah, Venus, Titus, and Juba— four slaves Harvard presidents had owned.

Faust, a historian of the Antebellum South, announced her plans for the memorial in a rare Crimson op-ed last week. In addition to the Wadsworth House plaque, Faust said she has also convened a committee led by history professors Sven Beckert and Evelyn B. Higginbotham to study other campus sites connected with slavery and consider future memorials.

“Harvard is very involved with its past, but this part of it has been marginalized, hidden, made not visible,” Faust said in an interview with The Crimson after the unveiling. “We want to have a full understanding of Harvard’s history, because that, I believe, will enable us to come together around what has been and transcend that and move to what we want to have happen in the future.”

Lewis, a prominent civil rights activist from Georgia, delivered a heartfelt address praising Faust for making such a visible effort to engage the history of slavery at Harvard.

“For 400 years, the voices of generations have been calling us to remember. We have been tossing and turning for centuries in a restless sleep. We have pleaded with them to be still, but they will not be silent,” Lewis said. “We are people suffering from amnesia. We are haunted by a past that is shut up in our bones. But we have just learned the truth of what it is.”

In his speech, Lewis—who was elected in 1986—reflected on the forgotten slave labor that went into building the nation’s capital. After the ceremony, Lewis told The Crimson he believes that other institutions in the government and private sector should follow Harvard’s example in reckoning with their own histories.

“This is very meaningful not just for this campus and the Harvard University community, but to the nation,” Lewis said. “I think this may help other faces all over America to realize the distance we’ve come and the progress we’ve made that we must never ever forget our past. We learn from the past. We learn from history. We can build on it.”

Beckert, who in 2007 taught a seminar on Harvard’s ties to slavery, unearthed the four names now gracing the plaque during several years of research with undergraduate students. The class eventually published a booklet recording their findings, which event staffers handed out to attendees at Dudley House.

“We know the names of individual people, and when the oppressions of slavery are translated into individual lives, I think they’re much more tangible. They’re much more available to us in the present to understand,” Faust said to The Crimson. “These are people like you or me, and slavery was not just a system, it was millions of human lives.”

“It is easy to highlight and to celebrate the things that have occurred in the past that instill us with pride. It is harder to shine a light on those aspects of our past that deeply disturb us, that confuse us, that confound us, and that we might prefer to leave in the shadows,” he said.

The installment of the plaque comes during a year when Harvard’s historical connections to slavery and racism have become a topic of scrutiny and discussion among many administrators. Earlier this semester, Faculty Deans replaced their old title because of concerns about the racial implications of the term “House master.” Just last month, the Harvard Corporation approved a Law School committee’s recommendation to change the school’s seal, which sparked controversy this year because of its ties to a formerly slaveholding family.