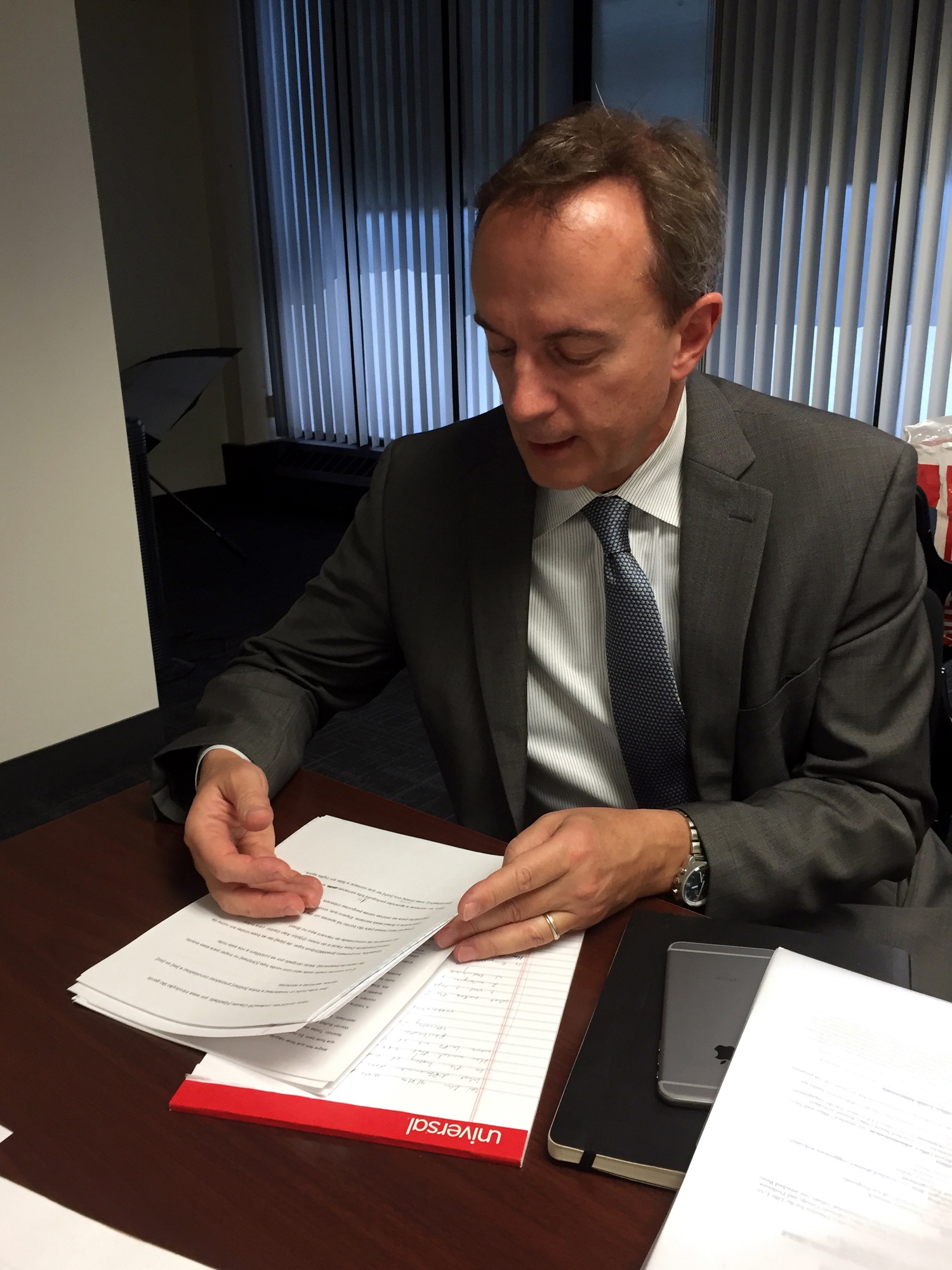 Vice Provost for International Affairs Mark C. Elliott displays a speech he wrote in Portuguese for his recent trip to Brazil and Peru.
By Siqi Liu and Hellary Y. Zhang, Crimson Staff Writers

Mark C. Elliott, Harvard’s new Vice Provost for International Affairs, is well known across the University for his scholarship in Chinese history. He was appointed the director of the Fairbank Center for Chinese Studies in 2013 and even accompanied University President Drew G. Faust on her trip to Beijing last year. 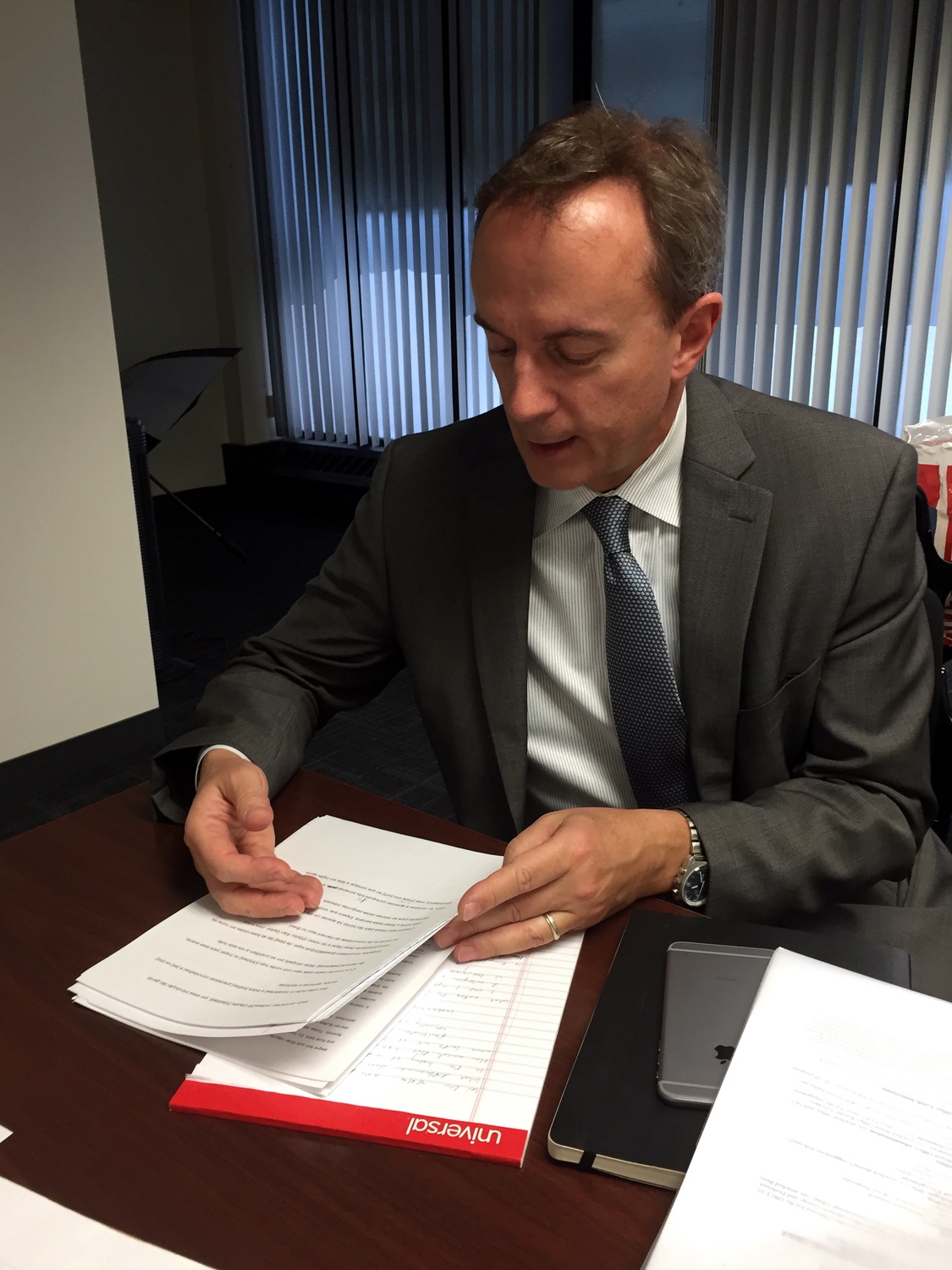 Vice Provost for International Affairs Mark C. Elliott displays a speech he wrote in Portuguese for his recent trip to Brazil and Peru. By Hellary Y. Zhang

Because Elliott took the helm from Jorge I. Dominguez, who had strong ties with Latin America, several professors assumed that Elliott would instead prioritize Harvard’s relationship with Asia.

“We thought it would make sense that [he] would then swing over towards Asia to balance things out,” Brian D. Farrell, professor of biology and the director of the David Rockefeller Center for Latin American Studies, said.

However, during his first few months in the role, Elliott has spent much time studying Latin America in order to prepare for his visit to Brazil and Peru this past week. Last fall, immediately after he learned he would visit the region, Elliott called Frances Hagopian, professor for Brazil Studies and faculty chair of the Brazil Studies Program at DRCLAS.

“I asked her to give me a 15-minute primer on Brazil,” he said. He added that in the months leading up to his visit, he read books on Latin American politics, watched popular films about the region, and even took Portuguese lessons from Brazilian undergraduates.

Elliott timed his first visit to South America as Vice Provost to attend an advisory group meeting of the Brazil Office of DRCLAS. During the meeting, the advisory board—which is composed of both scholars and individuals working in the private sector, both alumni and non-alumni—discussed potential projects and collaborations with Harvard affiliates.

Elliott said the meeting served as an opportunity to introduce himself to the board and learn about various Harvard initiatives in the region, including Harvard’s research on early childhood development and ways to use research to leverage public policy.

Hagopian, who attended the advisory board meeting in Brazil, said Elliott “exceeded [her] expectations.”

“For a historian of China to embrace this role, to embrace South America, is fantastic,” she said.

While in Lima, Elliott visited several branches of Innova, a privately funded Peruvian school system designed as an affordable alternative to public education from kindergarten through high school. He said he plans to meet with the head of Innova schools and the dean of Harvard’s Graduate School of Education over the next few months in the hopes of developing a potential “laboratory” of study for researchers at the GSE.

For Elliott, the trip to Latin America gave him a chance to “sourc[e] opportunities for research in the wider world where Harvard work can help to impact for the better outcomes that matter to us and matter to them.”

The trip even allowed Elliott the opportunity to explore his scholarly interest in East Asian Studies. While in Brazil, Elliott met with Chinese students at the University of Sao Paulo and gained a deeper perspective of Chinese studies in Latin America.

“That was something that opened a lot of doors and made the trip extra interesting for me,” he said. “I was able to get a much better sense of the way people in Brazil looked at China.”