When Layla B. Stahr ’17 powered up her computer last week, she planned to start writing the paper that she had woken up early to complete. What she did not expect to find, however, was an email announcing her selection to Harvard’s chapter of Phi Beta Kappa, the oldest undergraduate honors society in the United States. 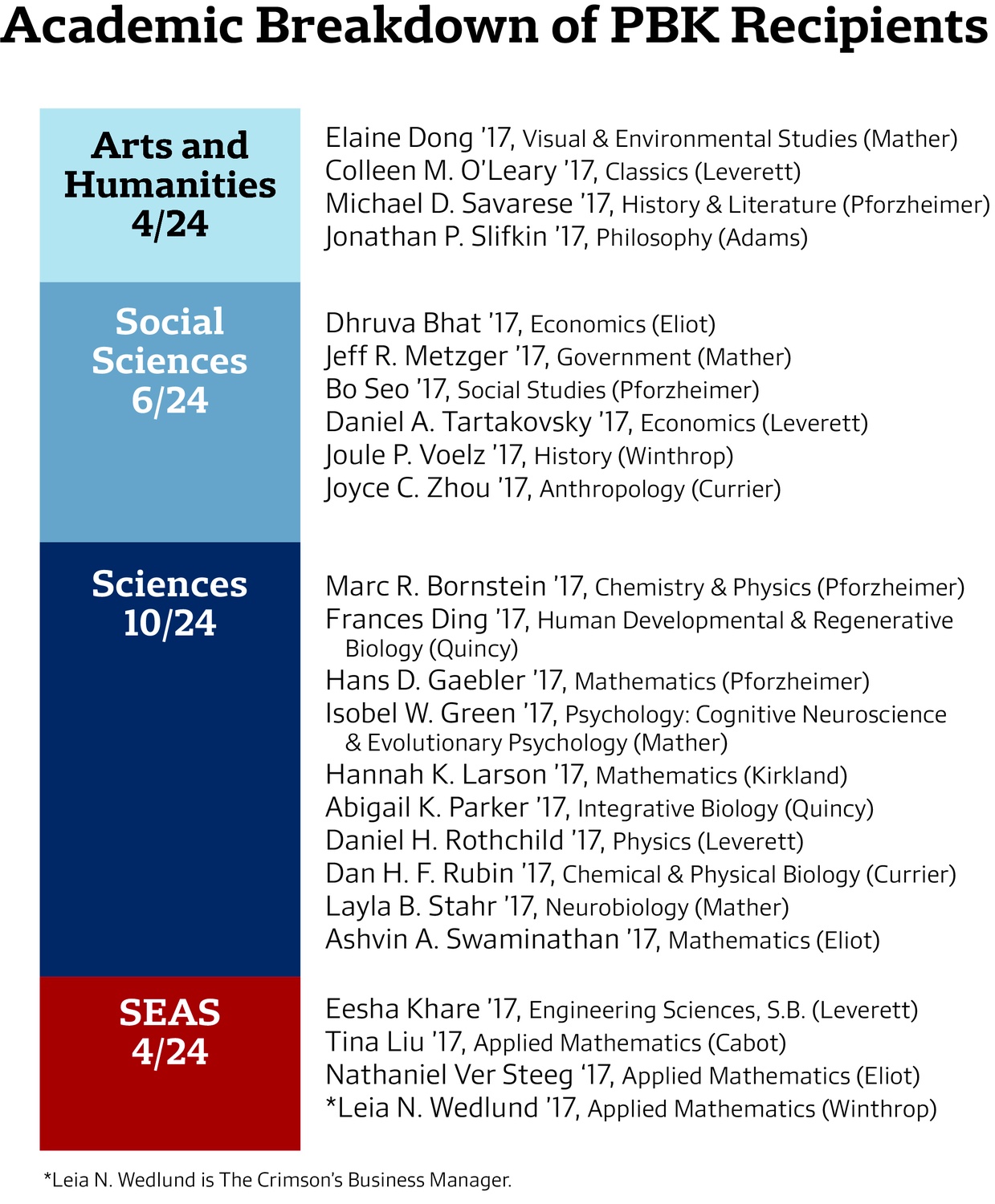 “I called my dad and told him; he was driving to work,” Stahr, a Neurobiology concentrator in Mather House, said. “That was cool.”

Stahr was one of 24 juniors who received the award, “an honor bestowed on those whose coursework demonstrates not only high achievement, but also breadth of interest, depth of understanding, and intellectual honesty,” according to the chapter’s website. Jeffrey Berg, assistant director of the Office of Undergraduate Research and Fellowships, announced the awardees in an email last week.

Pforzheimer House and Mather House had the highest representation among the group of students, with four students from each of the Houses receiving the honor. Neither Dunster House nor Lowell House had students represented in this year’s selection.

Jeff R. Metzger ’17, a Government concentrator in Mather House, described his reaction to his selection as a combination of “honestly a lot of disbelief” and “overwhelming happiness.”

“I would have never expected it, to be honest,” he said.

Beyond the initial shock of receiving the award, several of the honorees emphasized how gratified they felt to receive an honor for both the breadth and depth of their academic interests.

“What the award really means to me is a validation of all of the many influences that went into my education,” said Bo Seo ’17, a Social Studies concentrator in Pforzheimer House who also won the 2016 world debating championship. “I’ve come across the most kind of stunning range of thinkers and teachers and mentors, and that’s been the really special part of Harvard for me.”

“I know there’s a lot of talented people at Harvard,” Daniel H. Rothchild ’17, a Physics concentrator in Adams House, said. “And so I’m thankful to my department and to my professors who have helped me get to this point.”

Many of the awardees said that the honor reaffirms their approach to pursuing interdisciplinary work.

For Stahr, coming to college represented an opportunity to study a variety of interests.

“[Each semester], I’ve been really lucky to… pick a class that’s been just kind of random, that doesn’t necessarily count toward my concentration,” she said, adding that those niche interests include behavioral pharmacology and game theory. She said she hopes to take more classes in the Computer Science and Visual and Environmental Studies departments during her last semesters as an undergraduate next year.

“The problem is you only get 32 classes, and… as a freshman… you kind of figure out a path for yourself,” Hans D. Gaebler ’17, a Mathematics concentrator in Pforzheimer House, said. “Suddenly you’re a senior and you have only eight classes left…. It would be nice to explore things that are a little more off… of the path that gets laid out for you when you choose your concentration.”

Seo, too, said he has tried to take an interdisciplinary approach to his coursework, adding that the Phi Beta Kappa honor does not represent the end of his exploration.

“It doesn’t simplify the uncertainties I still have about my studies,” Seo wrote in a message. “But it does encourage me to keep asking challenging questions and to pursue a genuine, interdisciplinary education.”

Here is the full list of Phi Beta Kappa’s “Junior 24.” According to students, they will be honored at a dinner in Leverett House on Monday, May 2: