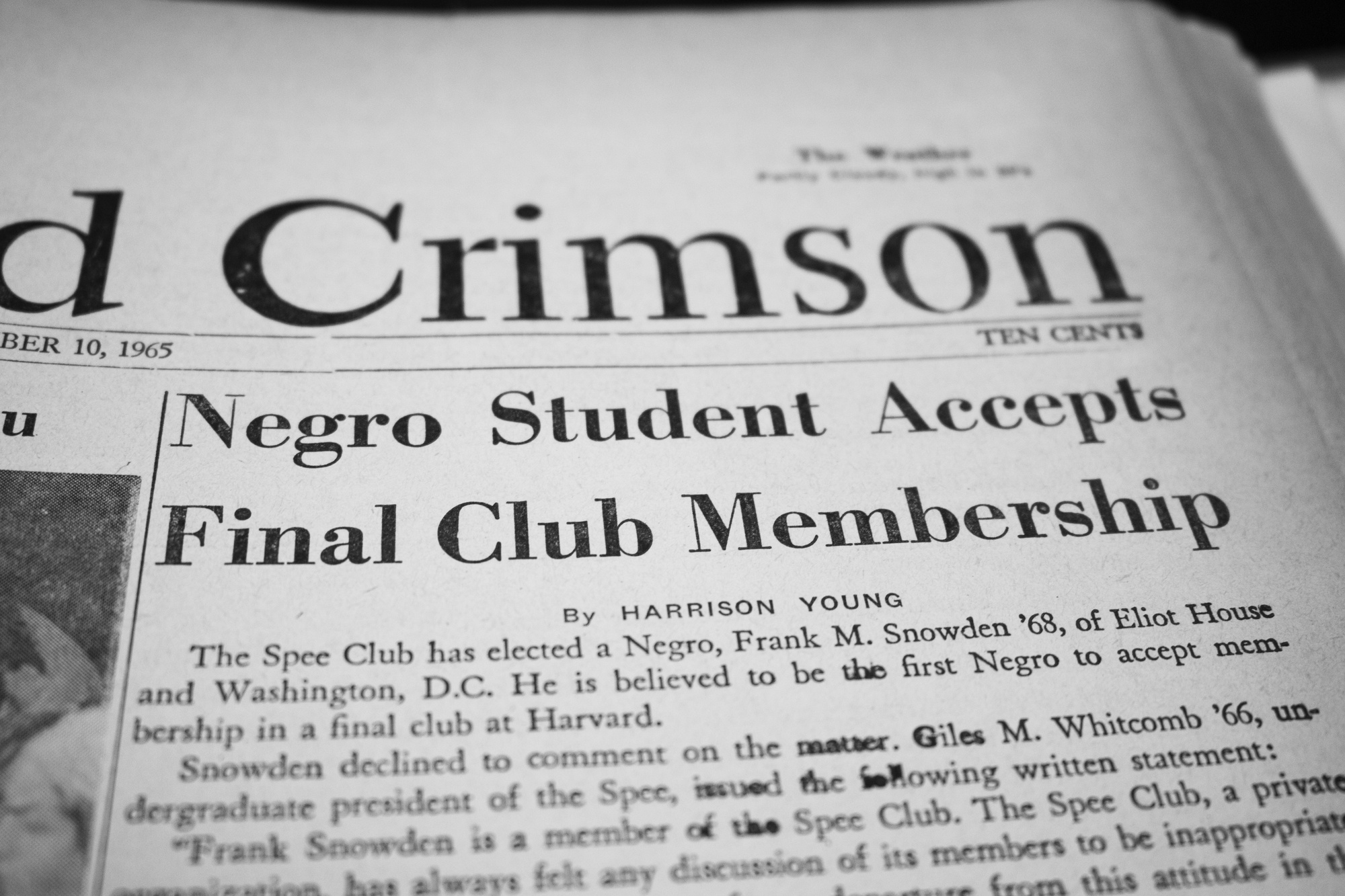 A headline from the December 10, 1965, issue when the Spee Club accepted its first black member. By Helen Y. Wu
By Marella A. Gayla, Crimson Staff Writer

In the fall of 1965, Frank M. Snowden III ’68, then a sophomore, partook in a centuries-old Harvard tradition known as punch: He attended a series of dinners and date events with the hope of becoming a member of the Spee, one of Harvard’s final clubs. Snowden’s punch experience, however, differed from those of the men who came before him. He was inducted to the club in December, making him the first black student to join the Spee—or any final club—at Harvard.

Now a professor of history and history of medicine at Yale, Snowden remembers his undergraduate years positively, despite “a little bit of turbulence” during the punch process. In an era when racial tensions were palpable on Harvard’s campus, Snowden saw the Spee as a “particularly liberal club,” a reputation that some today say resurfaced when the group admitted its first female members last fall.

Snowden’s punch was a first for final clubs, but the Spee was just one of several historically white institutions where he broke barriers.

Although final club membership had long been restricted to white males, Snowden was not surprised when he received an invitation to punch the Spee. A few of his close friends at Harvard had family connections to the club, and had reached out to him about diversifying its membership before punch season began.

“They thought that it was an important cause to integrate the Spee Club racially, and so they said they could nominate me and asked if I would like to be part of that process,” Snowden said. “I knew that it was segregated until that point and I was hoping to end the segregation.”

Snowden, then a government concentrator living in Eliot House, went through the punch process with a close group of friends who had also been his classmates at St. Alban’s School in Washington, D.C.

“I told them I wouldn’t join unless Frank could join,” Tom B. Reston ’68, one of Snowden’s high school friends, said. “I think there were other people in the punching class who told them the same thing.”

The sophomore punch class attended a number of events through the fall semester, including touch football games, date functions with Radcliffe women, and dinners in the homes of club alumni. Snowden went through the process without incident, but a few nights before initiations, he received an unexpected visit from Giles M. Whitcomb ’66, then the president of the Spee.

“He said that he thought the club was not quite ready and there was some resistance; the alumni had serious reservations,” Snowden said. “[Whitcomb] was clearly very embarrassed at his having to do this.”

Whitcomb—who is now deceased—asked Snowden if he would want to punch the club again the next year, when “everything might calm down,” but Snowden refused the offer. “They could punch me and admit me in the normal way, as a sophomore, or not at all,” Snowden said.

Despite resistance from some alumni, Snowden became a member of the Spee at the end of the semester. A 1965 Crimson article titled “Negro Student Accepts Final Club Membership” announced his induction and included responses from leaders of other final clubs, some of whom were still hesitant to integrate their groups. 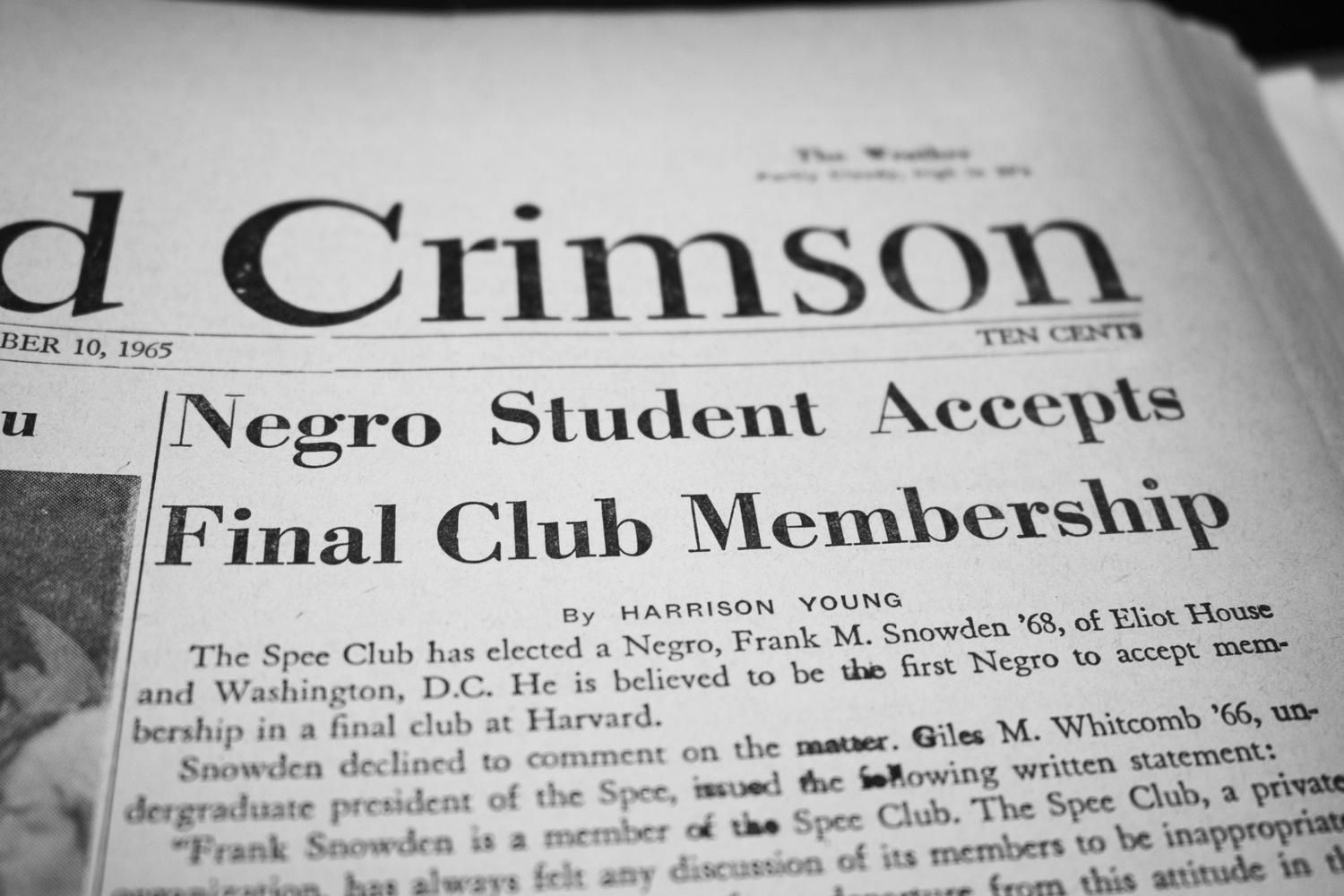 A headline from the December 10, 1965, issue when the Spee Club accepted its first black member. By Helen Y. Wu

“I don't want to say that this is a precedent that all the clubs at Harvard should follow, or that the Delphic Club is definitely going to take in a Negro, or a Chinese, or whatever,” William C. Coleman III ’66, then a senior and president of the Delphic Club, said at the time. “I think as far as the clubs are concerned within the context of Harvard University, this is a good thing. It is an indication that clubs are not as exclusive—in any sense, not just racially—as people have tended to think they are.”

As a member of the Spee, Snowden regularly enjoyed dinner and poker games with his peers at the Mt. Auburn St. clubhouse. He said that any racial tensions “ceased to be an issue” once he was inducted to the group. “I didn’t feel like a second-class member in any way at all,” Snowden said.

Snowden kept a social circle outside of the Spee and enjoyed academic and athletic success as a Harvard undergraduate, but the campus was not an idyllic one for black students in the 1960s. Snowden, who was one of a handful of students who identified as African American in a class of about 1,200, once received death threats over the phone.

“There were these pockets of resistance in the 1960s,” he said. “There were people who didn’t like going to classes with African-Americans, but I don’t want to say that’s my Harvard experience.”

Before Harvard and the Spee, Snowden was the the first black student at St. Alban’s School. The process of integration at the D.C. preparatory school, Snowden says, was “fraught.” Shortly after Brown v. Board of Education, the 1954 Supreme Court decision that desegregated American public schools, Washington’s private schools began to integrate as well. When Snowden enrolled in St. Alban’s as a sixth grader, he felt like a “social experiment,” under enormous pressure to represent African-American students well.

“I was told... that they were going to watch me carefully, and how I did would determine if any other African-Americans would be admitted,” Snowden said. “I had this sense that what I did was hugely important for our race as a whole, which is entirely unrealistic.”

Snowden excelled as a student and athlete, but still felt “let down” by the school, as discrimination continued after his acceptance. Although he was at the top of his class, Snowden could never join the school’s spelling team, as the spelling bees were hosted at segregated schools. According to Boisfeuillet Jones Jr. ’68, Snowden’s high school and college classmate, Snowden set record times as a middle-distance runner at St. Alban’s. Still, he was often excluded from sporting events that took place at segregated schools.

Snowden considered leaving the school during his first four years, but his experience improved as time went on. He took pride in his accomplishments and was supported by friends like Jones and Reston, and by his parents. Snowden’s father, Frank M. Snowden Jr. ’32, received his undergraduate and doctorate degrees from Harvard. A professor and dean at Howard University, the elder Snowden pioneered the study of black people in classical antiquity.

“My father is a classicist, and he told me that one of the messages from Greek literature was that knowledge comes with suffering,” Snowden said. “I think I probably felt that, and I knew that it wouldn’t always be fun.”

Snowden ended his career at St. Alban’s with a group of close friends and a slate of achievements, but he did not return to the school until 40 years after his graduation.

Although Snowden is not an active member of the Spee alumni network, he attends reunions at the clubhouse during Harvard-Yale weekend and is enthusiastic about the club’s recent decision to admit women. Last fall, the Spee became the first of the final clubs to go co-ed, a move that was more than a decade in the making, according to former club president Randall J. Winston ’04-’05. Winston’s presidency, like Snowden’s induction to the Spee, made campus news in 2004, as Winston was the first black member to take the position.

“What struck me as inducing pressure was the weight of history,” Winston said. “In staying true to [the Spee’s] legacy and building upon it as a young black man, there was pressure but there was also pride.”

Since graduating, Snowden has been invited back to both St. Alban’s School and the Spee Club to discuss his experiences with those institutions. Snowden said that at both St. Alban’s and the Spee, students—especially African-American students—seemed shocked to hear what he had gone through.