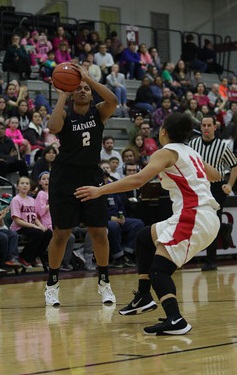 In her senior year, Tummala made the second most three pointers in the Ivy League.
By Manav Khandelwal, Crimson Staff Writer

She sank the second free throw, looked over at the bench, and smiled as she jogged back on defense. It was her final home game for the Harvard women’s basketball program, and senior forward Shilpa Tummala had signed off with a bang, scoring a career-high 24 points and grabbing 12 rebounds to lead the Crimson to an emphatic win over Ivy League rival Brown.

Most remarkable about the performance wasn’t that she scored 24 points on Senior Night, or that playing as a forward for the first time in her career she recorded her fourth double-double of the season—it’s the fact that Tummala should never have been on the court in the first place.

Once a top-100 recruit in her class according to ESPN, finishing second in the national high school three-point shooting contest at the 2012 NCAA Final Four, the Arizona native endured consecutive season-ending shoulder injuries in her freshman and sophomore campaigns, needing shoulder reconstruction surgery both times.

“Having a new shoulder two years in a row, that was really tough,” Tummala said. “For most people, that surgery would have been career-ending.”

A two-time state champion in high school, Tummala was touted as one of the top incoming shooters in the country. Nagging injures, however, limited her to just 28 total games. Her highly touted scoring abilities went unseen, contributing less than five points per game in her first two seasons. For someone with such high expectations and experience, it was a mental and emotional adjustment.

“It was really tough for me because I wanted to come in and confirm the belief of the people around the Ivy League, and my coaches and teammates, that I could contribute to the program in a way that was substantial,” Tummala said. “Not being able to play and meeting the expectations that were set for me, I felt like I was letting the team down.”

Tummala, however, did not feel sorry for herself. While she was unable to make an impact on the court, she trained harder, waking up early to lift and rehab on a daily basis while studying organic chemistry the summer before her junior year. Impressively, she also found time to make a difference in the community. She is an ambassador and volunteer for the Crossover Basketball & Scholars Academy, running a camp during the summer in Chennai, India. Tummala was honored by the Philadelphia 76ers this winter for her work with the Crossover program.

The experience and hard work put her on track to be an impact player in the 2014-2015 season, and while she finally avoided the injury bug, things were not all rosy for the 5’11” guard. Two straight seasons of injuries and rehab could not be erased easily.

“The kid literally missed almost every developmental part of her college career,” coach Kathy Delaney-Smith said, “which is spring, summer, and preseason work. Shilpa was always rehabbing and never able to grow her skill set.”

She shot just 22.2 percent from outside the arc in her first ten games, showing rust and a lack of confidence. Add to that the fact that shoulder injuries forced her to re-learn her shooting motion in back-to-back seasons, and you had was a shooter badly out of rhythm.

“Not being able to participate fully in my junior preseason was tough,” Tummala said, “because I hadn’t gotten the same amount of reps as everyone else and I was restricted in my ability to work out. Obviously, not having game experience, game time, [in the previous two years] played a factor in my lack of confidence.”

January, however, brought the turning point, as Tummala ignited a double-digit comeback against Dartmouth. A more focused and confident player emerged from that contest as she ended the season with two 15-point games in her last three contests, representing a new career high.

Tummala continued to work hard on returning to full fitness and confidence, training over the summer with co-captain Kit Metoyer while studying for the MCAT and researching her thesis. When she returned to the team in the fall and Delaney-Smith asked her to switch to the small forward spot to accommodate a large class of incoming freshman guards, Tummala took it in stride, just as she had her entire career.

“We switched her to a forward position, which was foreign to her,” Delaney-Smith said. “She very humbly and unselfishly did that for the team, and ended up being invaluable in that role because she had guard skills.”

She indeed became an indispensable member of the offense, scoring 11.7 points per game while shooting an impressive 35.2 percent from three-point range. She adjusted to her new role at the three spot—occasionally even filling in at the four—quite well, leading the team with 6.5 rebounds per game.

It was truly remarkable to see Tummala perform at the level expected of her four years ago given the struggles she went through during the early parts of her career. By the end of the season, the entire league had taken notice, and she was rewarded with an All-Ivy Honorable Mention selection.

Staff writer Manav Khandelwal can be reached at manavkhandelwal@college.harvard.edu.