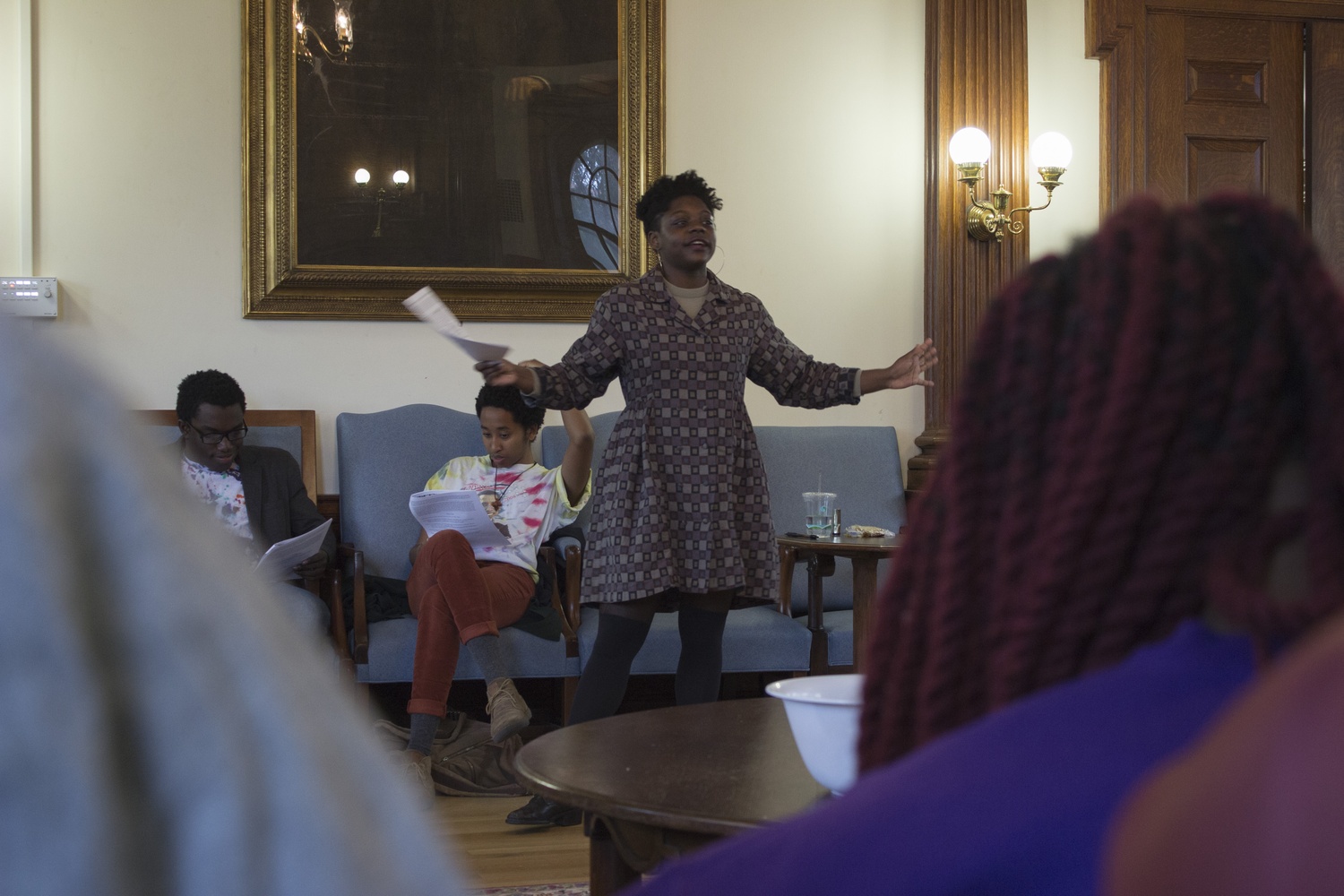 Abby D. Duker ‘18 lectures on the history of Harvard President Abbott Lawrence Lowell on Thursday afternoon at the Phillips Brooks House as a part of a teach-in. Titled “Reframing Harvard’s History,” the event received support from the Undergraduate Council and the Office for Equity, Diversity, and Inclusion. By Thomas W. Franck
By Jonathan G. Adler, Crimson Staff Writer

Brianna J. Suslovic ’16 conceived of the event, called “Reframing Harvard’s History,” in March. The Undergraduate Council’s “Grant for an Open Harvard College” funded the event itself, while the College’s Office of Equity, Diversity, and Inclusion paid stipends to six students to pursue the research outside their other academic pursuits.

Suslovic said she thought of the project because she and others wanted to teach people about Harvard’s history with issues of diversity following a recent decision to change the title of House master to “Faculty Dean.”

“This in particular for me was a project that I wanted to do after I realized how frustrated I felt with a lot of the conversations that were happening on campus, just because I felt like a lot of them didn’t feel like they had a historical context to them,” Suslovic said. “I would say that the project is an opportunity to add some new knowledge to people’s conversations.”

Suslovic and the other students who contributed to the project in part researched figures from Harvard’s history whose lasting presence on the University’s buildings has aroused controversy.

For example, Nawal K. Arjini ’18, Christopher Hopson ’19, and Abby D. Duker ’18 all looked into the tenure of former University President Abbott Lawrence Lowell. His place as the namesake of Lowell House has faced criticism in recent years for his banning of black students’ living in Harvard Yard, setting quotas for Jewish students at the College, and establishing a secret court prosecuting students suspected of being homosexuals.

Suslovic said that the creators of the event also sought to shine a light on past student activism that led to changes at Harvard.

“There’s an important thing to be recognized in the conversation—being able to recognize people who for whatever reason were marginalized in Harvard’s past, or people who were advocating to make positive change on campus,” Suslovic said. “Those people are forgotten from building names and general Harvard lore in ways that I don’t think that people like Mather or Holyoke [are],” she said, referring to former University Presidents Increase Mather and Edward Holyoke.

Telling the stories of those students—like the activists who successfully pushed for what is now the Undergraduate Minority Recruitment Program in 1973—will give current student activists models to follow, Suslovic said.

The Reframing Harvard’s History Project’s inception comes at a time of heightened student activism over the controversial histories of certain names and symbols on campus. Earlier this spring, Harvard approved plans to eliminate the Law School’s seal, which was linked to the slaveholding Royall family, and undergraduates are debating the name of Mather House given its namesake’s own slaveholding history. Administrators, including University President Drew G. Faust, have spoken against what they deem “erasing” history, urging a closer study of all aspects of Harvard’s past.

Suslovic and UC leaders said they hoped research of this sort could continue for years to come. The difficulty will be in finding a consistent source of funding, Suslovic said.

“There were some funds that were available through the Office [of Equity, Diversity, and Inclusion], but we all agreed that moving forward, we want to be able to integrate this into an already existing research program,” Suslovic said.

UC President Shaiba Rather ’17 said she was hopeful that Suslovic and the UC could find a way to “institutionalize” this type of research, noting that she and UC Vice President Daniel V. Banks’17 were in “conversations with Brianna, her researchers, as well as key administrative partners.”

“This is something that is worth giving good consideration,” Rather said.