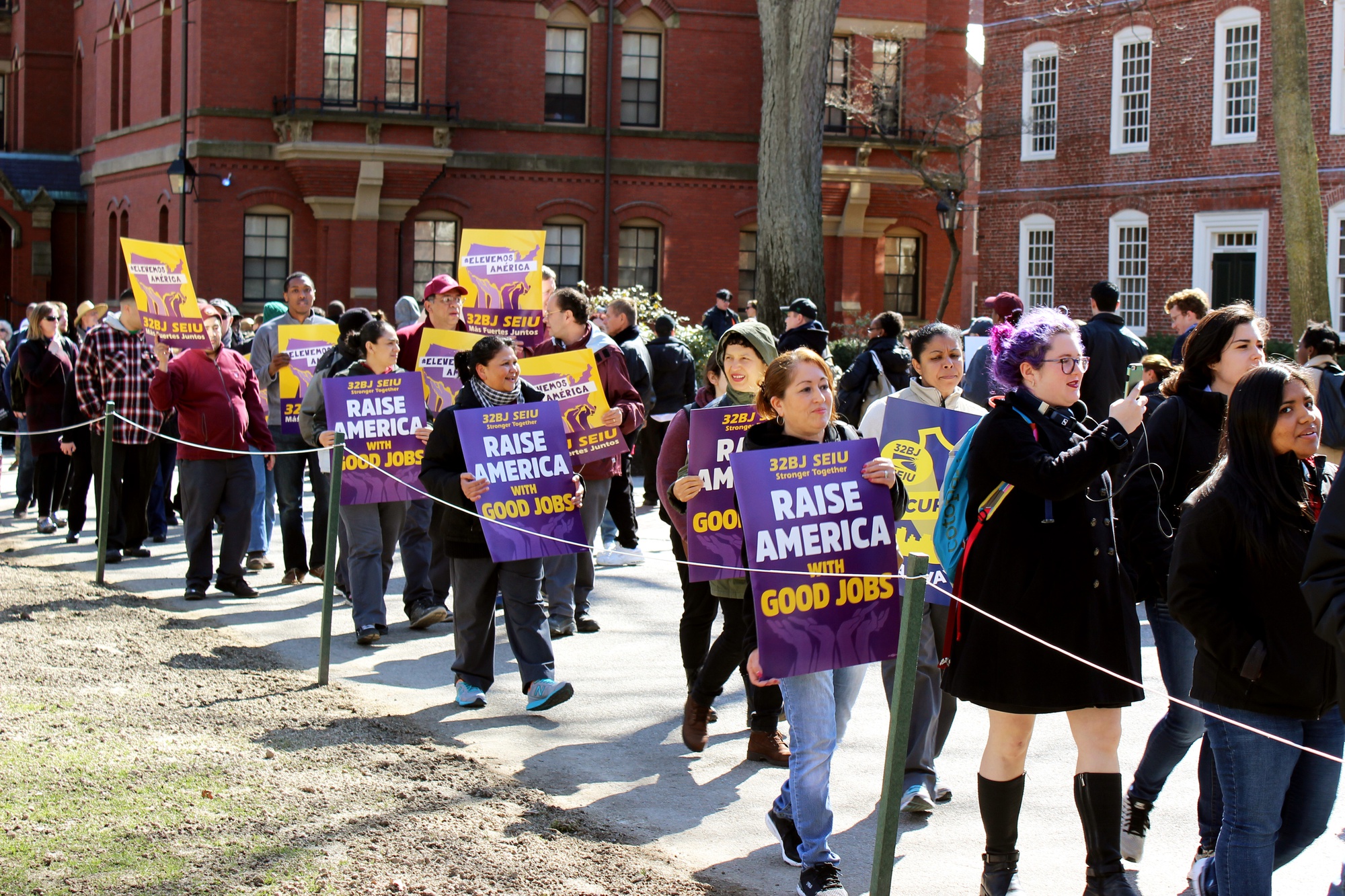 Over 200 Harvard affiliates gather to protest for higher wages and increased health benefits for Harvard University Dining Services Workers. The rally is the latest in a series of events SLAM has hosted since launching their “One Harvard” campaign.
By Brandon J. Dixon, Crimson Staff Writer

Harvard and its dining services workers traded contract proposals at the first few bargaining sessions of this year’s round of negotiations in early June.

According to a press release, UNITE HERE Local 26—the union that represents Harvard University Dining Services workers—proposed a “number of things to make Harvard a more welcoming place to work” at a bargaining session on June 3. Among the proposals were provisions for expanding diversity and civil rights protections for HUDS workers, modifying uniform policies, and emphasizing seniority in promotions. 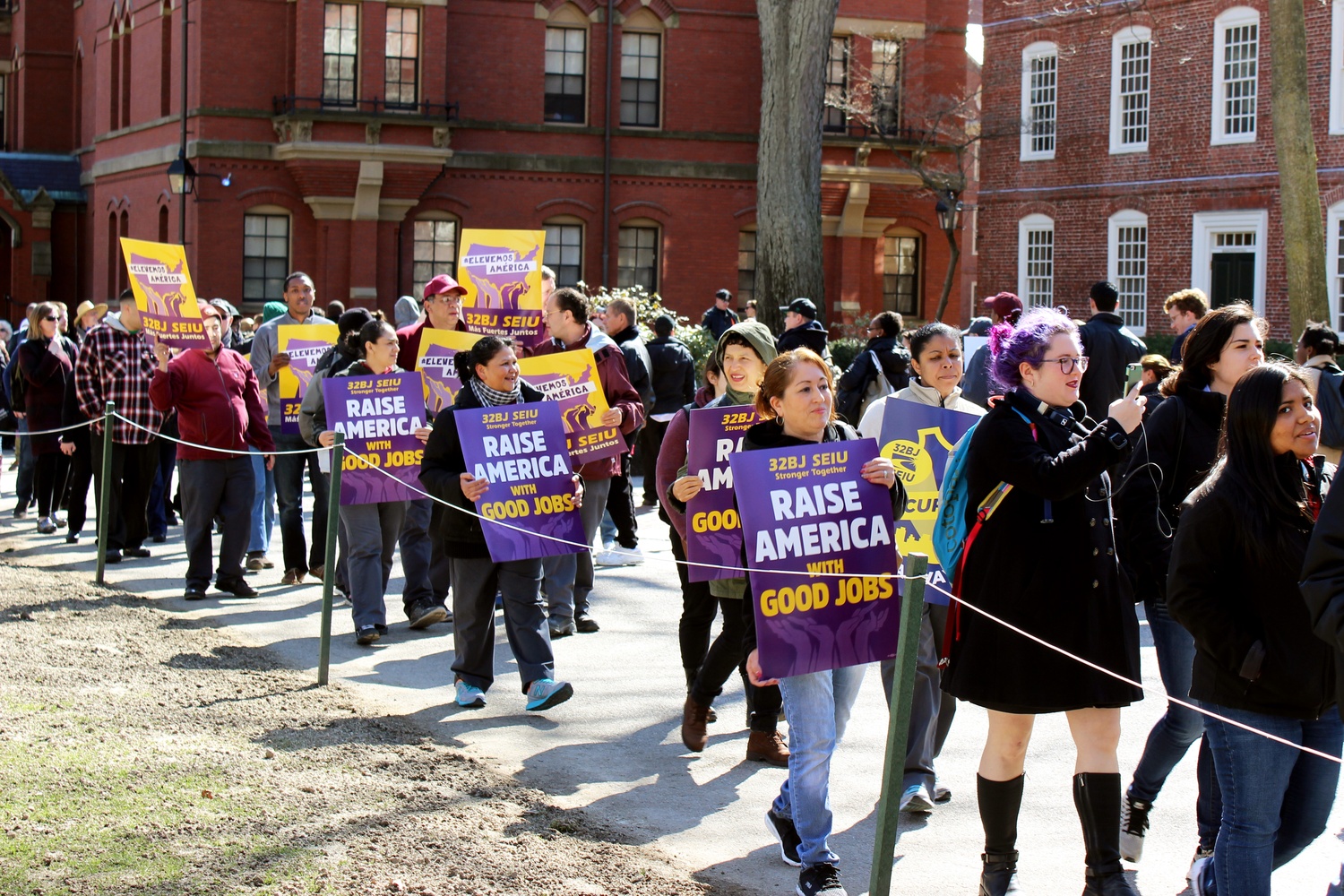 Over 200 Harvard affiliates gather to protest for higher wages and increased health benefits for Harvard University Dining Services Workers. The rally is the latest in a series of events SLAM has hosted since launching their “One Harvard” campaign. By Thomas W. Franck

Harvard’s proposals—presented at the same session—were varied, but focused largely on the widely contentious topic of health care, according to University Director of Employee and Labor Relations Paul R. Curran. Though Local 26 members previously said they feared Harvard would extend health care benefits similar to those the University offered to its non-unionized employees in late 2014, Curran said the University proposed the “exact same” health benefits package that its largest employee union bargained for earlier this year.

The plan eliminated deductibles even as it moderately increased the cost of patient copayments, a move that many members of the Harvard Union of Clerical and Technical Workers largely praised. Danielle R. Boudrow, a HUCTW member, lauded the plan for discarding what she described in February as the “most dangerous parts” of the benefits previously offered to non-unionized employees at Harvard.

Though Curran said that Local 26’s bargaining team considered the benefits plan “under advisement,” a subsequent press release from the bargaining unit disseminated after the June 9 session mentioned that union members still had unanswered questions about the details of the plan.

HUDS’ contract with the University—last ratified in 2011—is set to expire on June 19. Further bargaining sessions are scheduled throughout the month, with the next one on June 14. The bargaining process often lasts for as many as 15 to 20 sessions, according to Curran, though HUCTW’s earlier negotiation with the University consisted of more than 40.

Curran said he expects a similar timeline with these negotiations, and that both parties have frontloaded bargaining sessions—scheduling them at two per week—to make up for starting late. When asked when he believed the negotiations would end, Curran said that bargaining is a “very incremental process.”

At the first session near the end of May, Harvard and Local 26 came together to establish “ground rules” for the negotiation process to govern details like how long the sessions will last, the order of proposals, and how long breakout sessions—called caucuses—would last. Bargaining sessions have since been “very cordial” according to Curran.

Over the course of the past semester, HUDS workers have collaborated with a number of organizations across Harvard’s schools to rally for changes in benefits, including the undergraduate group, Student Labor Action Movement.

Organizing under the banner of what they call the “One Harvard” coalition, SLAM held several events throughout the semester urging administrators to consider the concerns of the dining services workers. In March, the group delivered a letter to University President Drew G. Faust asking her to publicly support the coalition. In April, SLAM drew more than 200 Harvard affiliates to a rally outside of Massachusetts Hall in support of the workers.