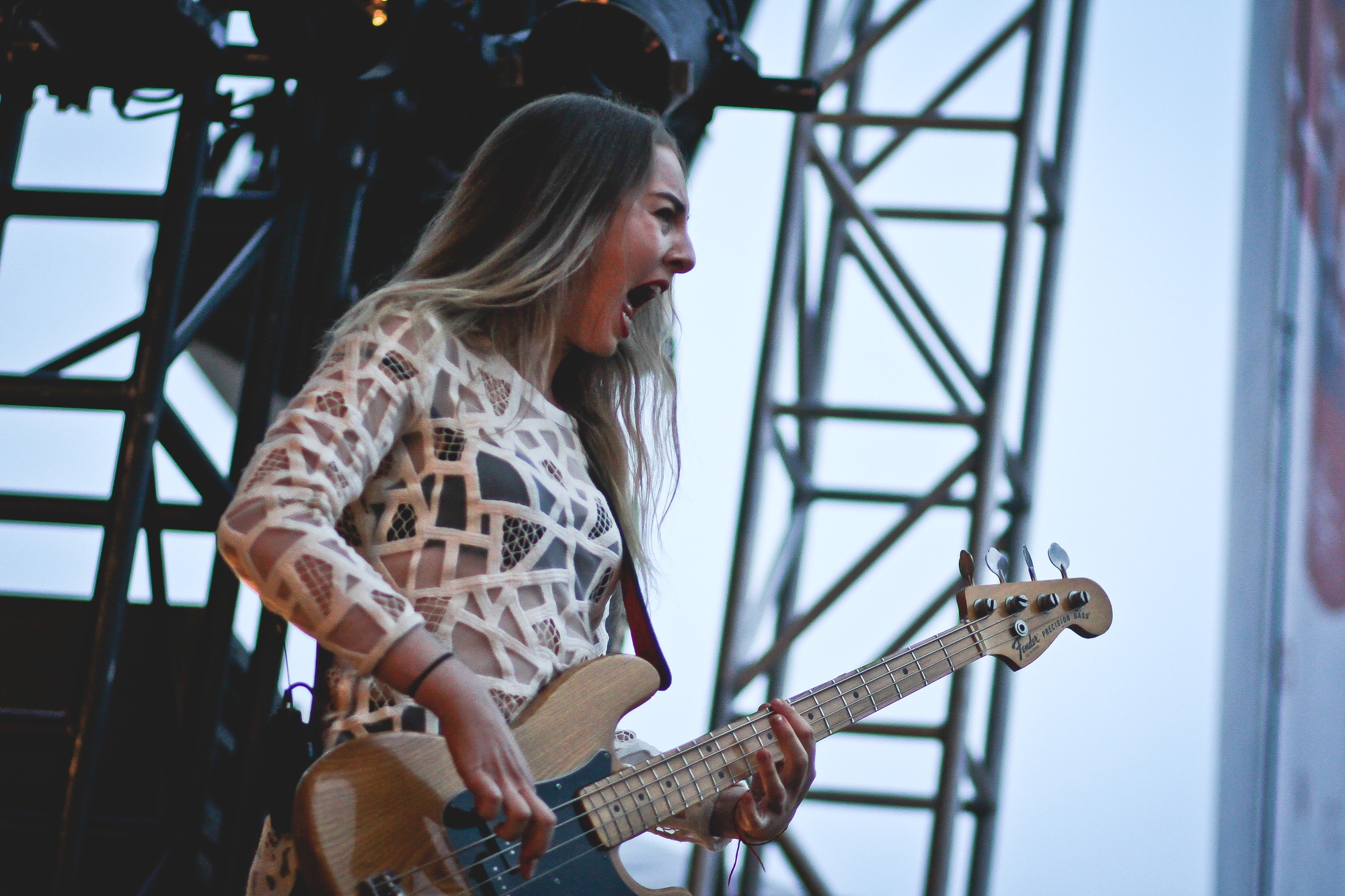 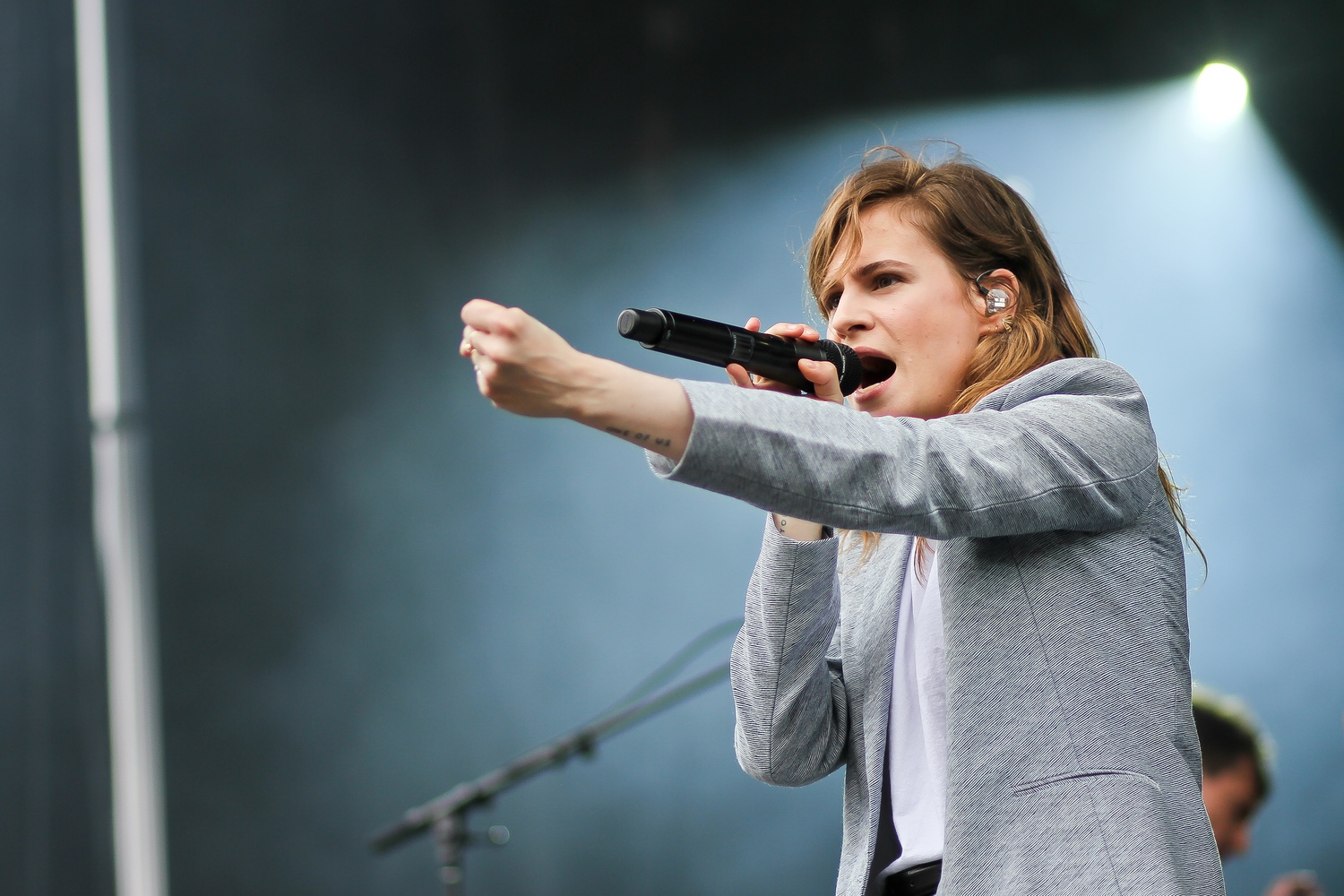 Christine and the Queens performs at Boston Calling on Sunday, May 29. By Shunella Grace Lumas

The French singer-songwriter Héloïse Letissier encouraged acceptance and being comfortable with oneself throughout her performance. She moved with precision and rhythm, and her voice was soothing and moving. Despite her early scheduling, the crowd was energetic. The backup dancers (the Queens) displayed some impressive break-dancing, and their movements seemed as important an element of the performance as did the music. Letissier ended by singing “Happy Birthday” to one of the dancers and told the audience to “Stay freaky” as they walked off the stage. Though one of the less commonly known artists in Sunday’s lineup, Christine & the Queens left a strong impression with their fun performance.

Elle King delivered an unapologetic, assertive performance on Sunday. In a fringed black leather jacket over a t-shirt bearing the words “Just Right” and bright blue boot-cut jeggings, hair dyed purple and turquoise to match her pants and rainbow glitter-encrusted eyelids, King exuded confidence. She stopped to take sips from a plastic cup full of beer and admitted to the crowd she was never sober in the “drinking town” of Boston. She called herself “a chain-smoking, hard-drinking woman,” and belted out her hits, including “Ex’s and Oh’s,” in her unique throaty voice with captivating control and mastery. With Elle King, the night had truly begun. 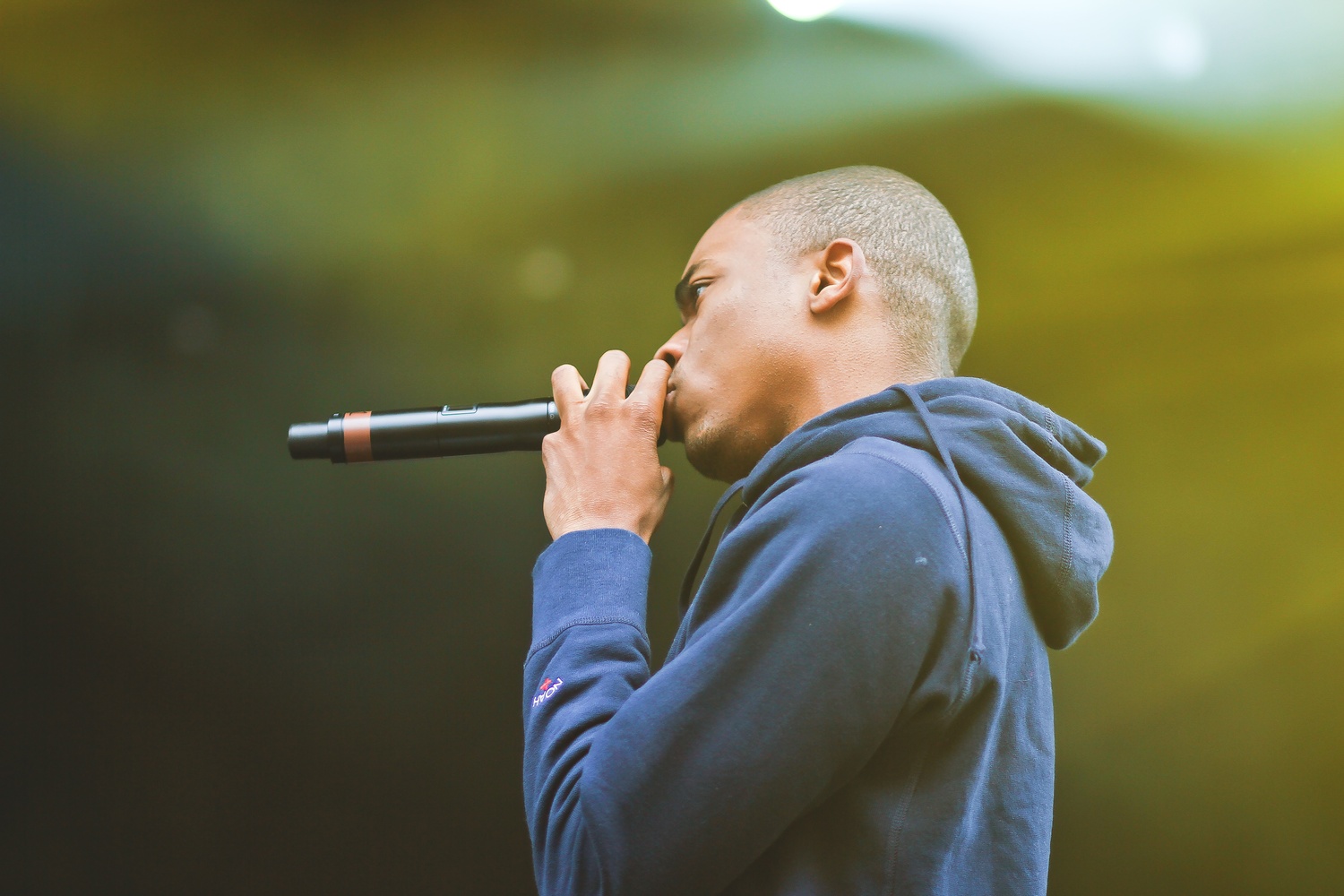 Vince Staples performs at Boston Calling on Sunday, May 29. By Shunella Grace Lumas

Vince Staples got the crowd worked up and energetic with a performance that mixed focused rapping with bantering humor. He chanted “Bounce!” and the crowd chanted back, jumping to his catchy beat and heavy bass. He urged the crowd to stay in school and listed some of Boston’s prestigious universities, prompting the crowd to shout back the ones he missed. And he rapped about his ascension from humble beginnings with a pointed determination that seemed to show he was proud of his success but did not take it for granted. Staples, who claims to have never done drugs or consumed alcohol, also counseled the audience to say no to these substances—then shouted, “But if you are high, make some fucking noise!” In that way, Staples created a dynamic and engaging atmosphere—one that remained even after Staples leapt off the stage and finished his performance, standing in the front of the crowd gone wild with cheering. 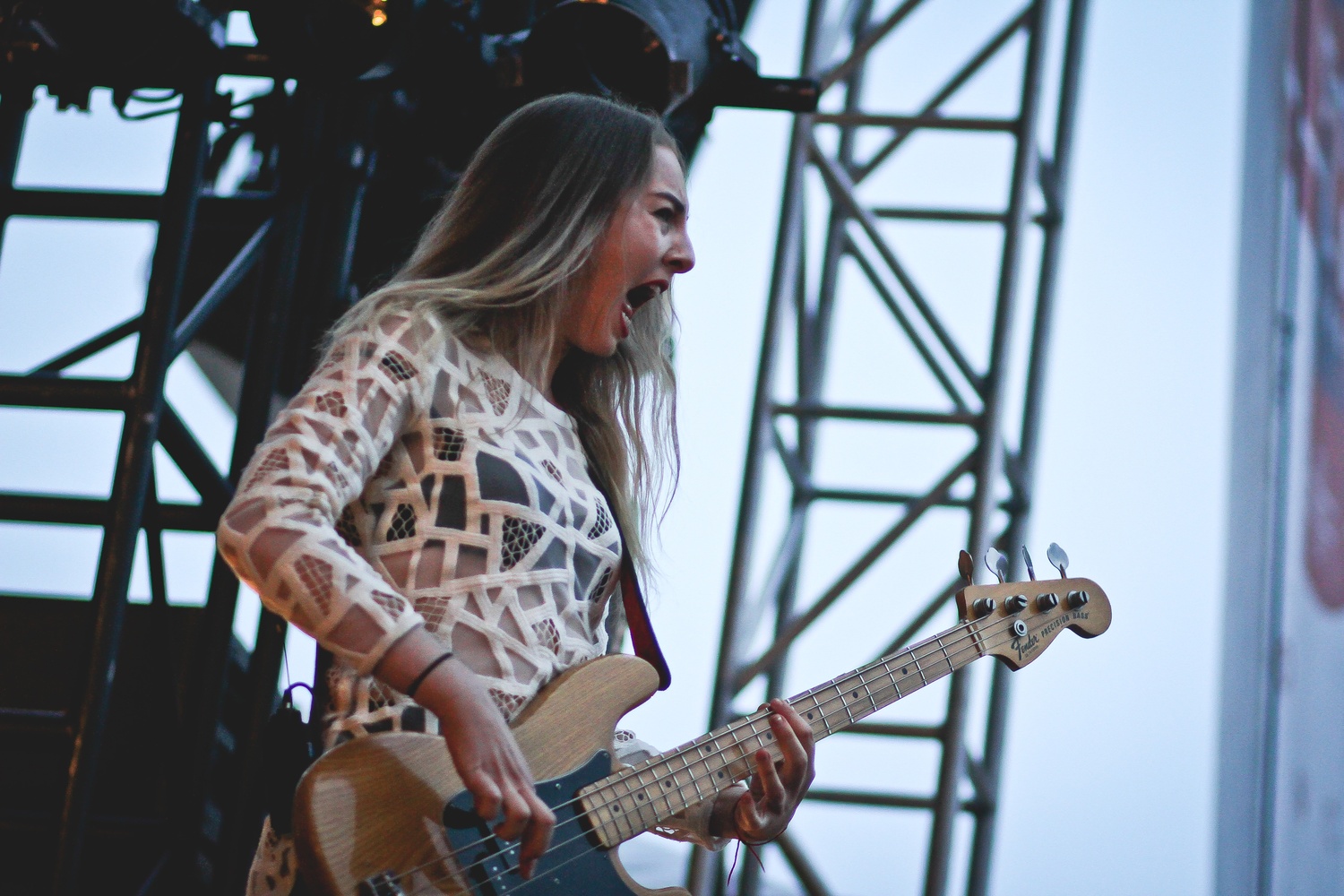 HAIM performs at Boston Calling on Sunday, May 29. By Shunella Grace Lumas

HAIM had a tough act to follow after Janelle Monáe, but their performance did not disappoint. The three sisters from LA stood in a line on stage behind their microphones, each with a guitar slung over her shoulder. Their voices were soft, but the crowd was swaying and clapping to the rhythm of their music. Though HAIM’s studio work is more pop-driven, their live performance possessed considerable rock elements, which lent a more artful flavor to their music. Christine & the Queens made a surprise appearance, dancing behind the three sisters as they performed a cover of Prince’s “I Would Die 4 U.” Later, it was just the three girls in front of large mirror sheets, rocking to their intense guitar playing, welcoming the darkening night with an impressive performance. 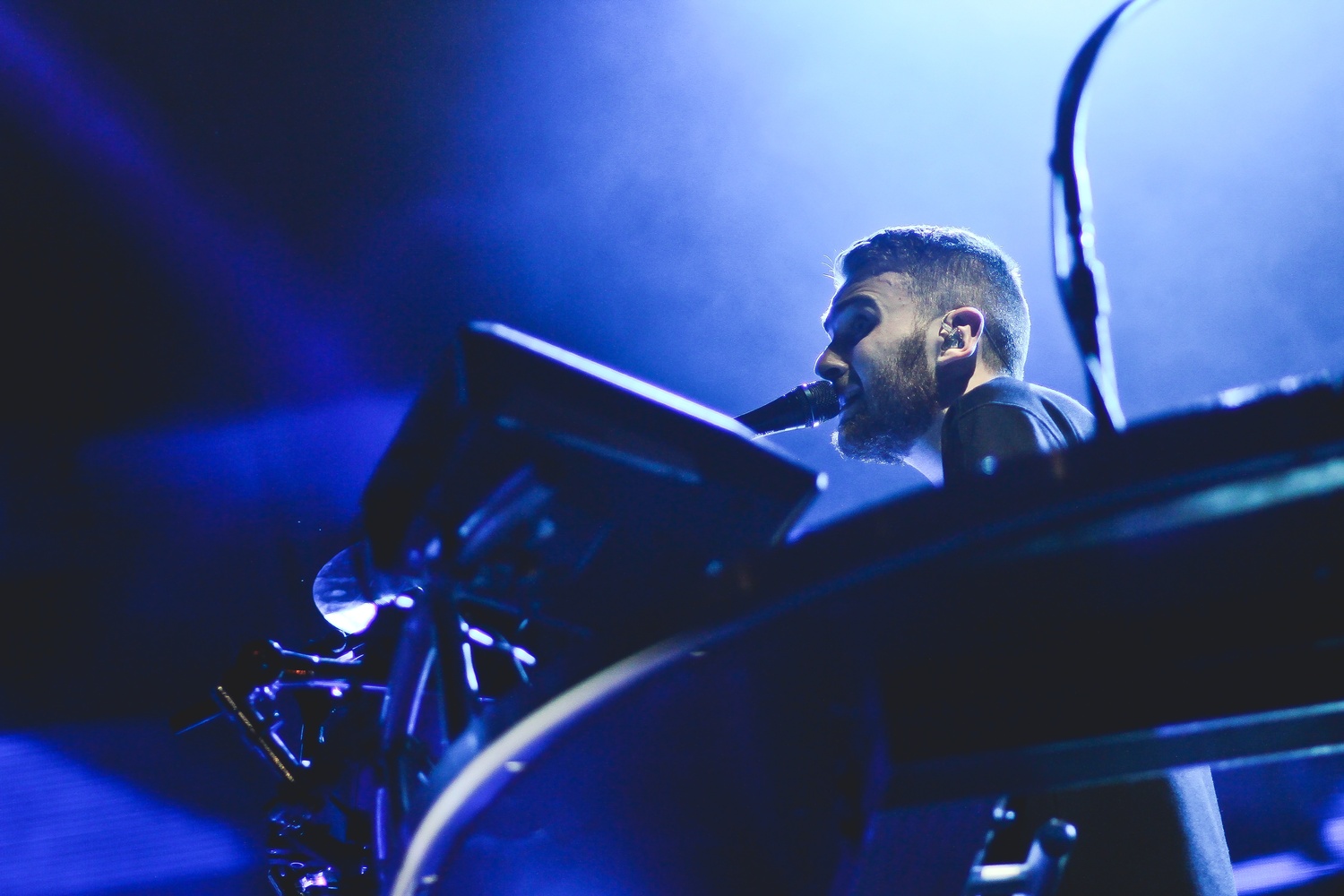 Disclosure performs at Boston Calling on Sunday, May 29. By Shunella Grace Lumas