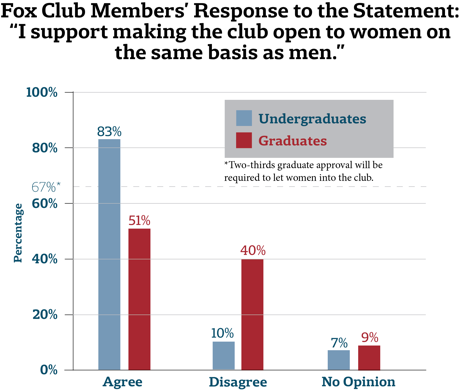 This week, graduates of the Fox Club could reverse a historic undergraduate move that last year controversially added women to the 118-year old club.

At a Thursday morning special meeting, Fox club graduates will vote on two resolutions: whether to “allow undergraduate members to punch and elect female members in the 2016-2017 school year and beyond” and whether to allow undergraduates to extend “provisional” memberships granted to female and many male undergraduates until the summer of 2017, according to a copy of the ballot that was obtained by The Crimson.

Although extending provisional memberships requires only a simple majority to pass, changing the club’s “nature or character” by allowing female members requires a two-thirds majority.

The vote is almost sure to inflame tensions further among Fox club members, who have spent the past year at loggerheads over the role of women at the club, the bounds of undergraduate members’ power, and the proper response to administrative pressures.

While the co-ed question will remain undecided until Thursday, an internal survey conducted by the Fox club’s Path Forward Steering Committee, a body formed in the wake of intense internal controversy at the club, bears bleak news for those in favor of a co-ed or gender neutral Fox club.

Just over half, or 51 percent, of surveyed graduate members said they supported “making the club open to women on the same basis as men,” well short of the two-thirds majority needed. In contrast, 83 percent of polled undergraduate members, who will not participate in Thursday’s vote, support opening the club to women.

The survey did not query members on how they would vote on the question of extending provisional members. Last October, in an attempt to quell graduate opposition to the co-ed move, many female and male Fox initiates accepted temporary memberships into the club, pending a future graduate vote. Given that extending the provisional membership for a year requires only a simple majority though, the prospect looks brighter for undergraduates on that front.

Still, the survey figures, should they hold, could represent a disappointment for the club’s graduates and undergraduates who advocated for female members. A return to purely all-male membership policies at the Fox would also cast a pall on extensive efforts from College administrators to compel single-gender groups to embrace a wider membership pool, efforts that culminated last academic year with the announcement of unprecedented sanctions on single-gender social organizations.

Fox graduate board president Hugh M. Nesbit ’77 and Fox undergraduate President Ian P. Meyer '17 did not respond to request for comment for this story.

In addition to its projection about the future of women at the Fox, the survey highlights a persistent sticking point of final club life: the seemingly-unavoidable tension between the graduate membership, who control the clubs’ legal, financial, and physical infrastructure, and the undergraduates who regularly enjoy the benefits of the clubs’ deep coffers and plum real estate.

While the Fox is deeply divided on the question of female members, the survey laid bare a host of other issues on which the opinion of undergraduates and graduates differ.

Despite agreement on what the report called “key elements” of the club’s purpose—over 75 percent of undergraduate and graduate respondents agreed that “Friendship” and “Camaraderie” were important elements of Fox Club life—graduates and undergraduate survey respondents logged significant differences on issues ranging from the purpose of the clubhouse, to the Fox’s place in the broader undergraduate community, to trust in University administrators.

Undergraduate respondents, for instance, were far more likely to think the club should be a part of Harvard’s broader social milieu—49 percent of them strongly agreed with the statement that the Fox “should contribute to the social life of the broader undergraduate community. Only 15 percent of graduates expressed strong agreement with the same statement.

This difference is also reflected in views towards the proper use of the club’s 44 JFK Street clubhouse, which the Fox’s graduate board briefly shuttered last year as a result of continuing strife between graduates and undergraduates. Just four percent of undergraduates expressed agreement with the prompt that “the Clubhouse should be a members-only facility” closed to parties, date events, and other larger social functions. Roughly a third of graduates strongly agreed with the statement.

While University administration was not well-regarded among respondents—perhaps no surprise for a club whose undergraduates claimed that administrators “forced [their] hand” in making the decision to add women to the club—undergraduate respondents were more than three times more confident than graduate ones that the club would be “treated fairly” by the University: 28 percent to 9 percent, respectively. 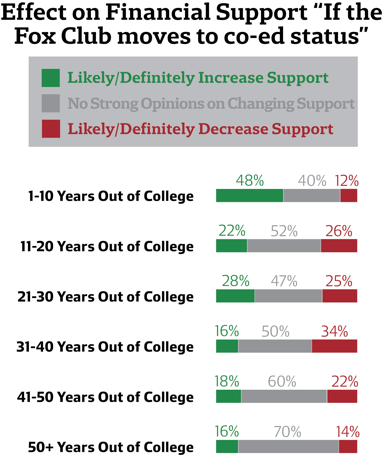 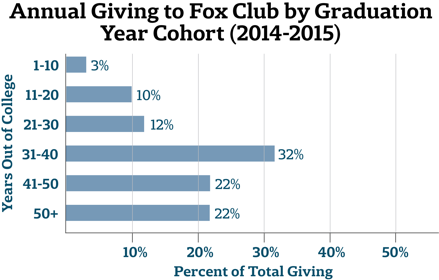 In the 2014 fiscal year, for instance, club records indicate total expenses at the Fox exceeded $200,000, with the undergraduates cost share coming to roughly $28,000. According to the survey results, the bulk of the tab is picked up by alumni who graduated from Harvard over 30 years ago.