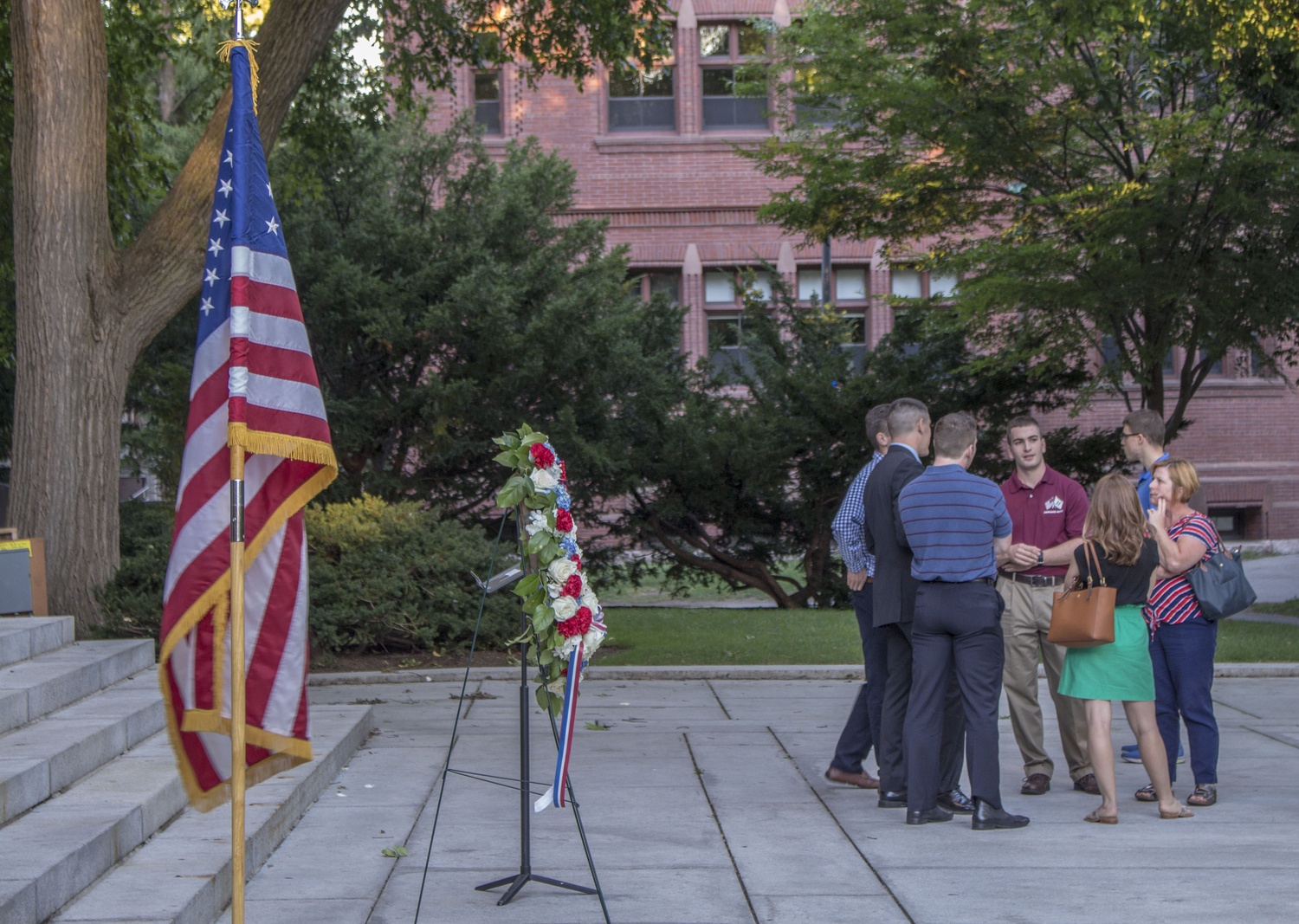 Harvard ROTC members and their families, along with students and faculty, gather for a 9/11 memorial at the Memorial Church steps Sunday evening. The event, which featured a speech by Dean of the College Rakesh Khurana and a wreath laying ceremony by Harvard ROTC, was in remembrance of the 15th anniversary. By Helen Y. Wu
By Kenton K. Shimozaki, Crimson Staff Writer

Nearly 100 people—including young children, undergraduates, faculty, and Harvard staff—crowded the steps of Memorial Church on a windy Sunday afternoon to commemorate the 15th anniversary of the Sept. 11 terrorist attacks.

Featuring a wreath-laying ceremony and remarks from Dean of the College Rakesh Khurana, the memorial service, sponsored by the Harvard Reserve Officer Training Corps Association, focused on the power of unity in the face of loss.

Although the deadliest attack on American soil since the 1941 attack on Pearl Harbor may feel distant for some undergraduates—most of whom were young children at the time—Luke I. Pumiglia ’17, an Army ROTC cadet and member of the Harvard ROTC Association, said it is important to continue to reflect on the attacks.

“I think it’s easy being on campus, and sort of being in your day-to-day experience, especially for students to forget a lot about what has happened,” he said. “It’s nice to give everyone a little bit of a perspective.”

Pumiglia specified he was speaking individually and not on behalf of the ROTC or the military.

The short ceremony began with the singing of the national anthem by Opportunes member Toni Divic ’17 and ended with a benediction from undergraduate Catholic chaplain Mark W. Murphy. Delivering the main remarks of the event, Khurana affirmed the importance of unity and helping others even in the face of tragedies like Sept. 11.

“Grief and loss are powerful emotions. They’re emotions that have the power to unite us and bind us in both time and space,” Khurana said. “And while they’ve created a sense of unity around this day, and remembrance and reflection, they also inspire us to remain united as a community whenever we face difficult issues.”

Although the ceremony typically takes place within Memorial Church, ongoing renovations led organizers to relocate the event this year.

Matthew Goodman ’18, who is from New York City, said the commemoration was important as he reflected on his childhood memories of that day.

“9/11 was my first day of kindergarten, and I was very fortunate that nobody in my family was directly affected by the attacks, but other members of my school community weren’t as lucky,” he said.

Remembrance of the Sept. 11 attacks was also incorporated into the closing ceremony of the Nieman Foundation’s Pulitzer Centennial celebration, which featured the performance of a musical composition by John C. Adams ’69 originally dedicated to commemorate the first anniversary of the attacks.

An installation of American flags, each representing one of the 2,977 lives lost in the attacks, was also displayed in front of Annenberg Hall.