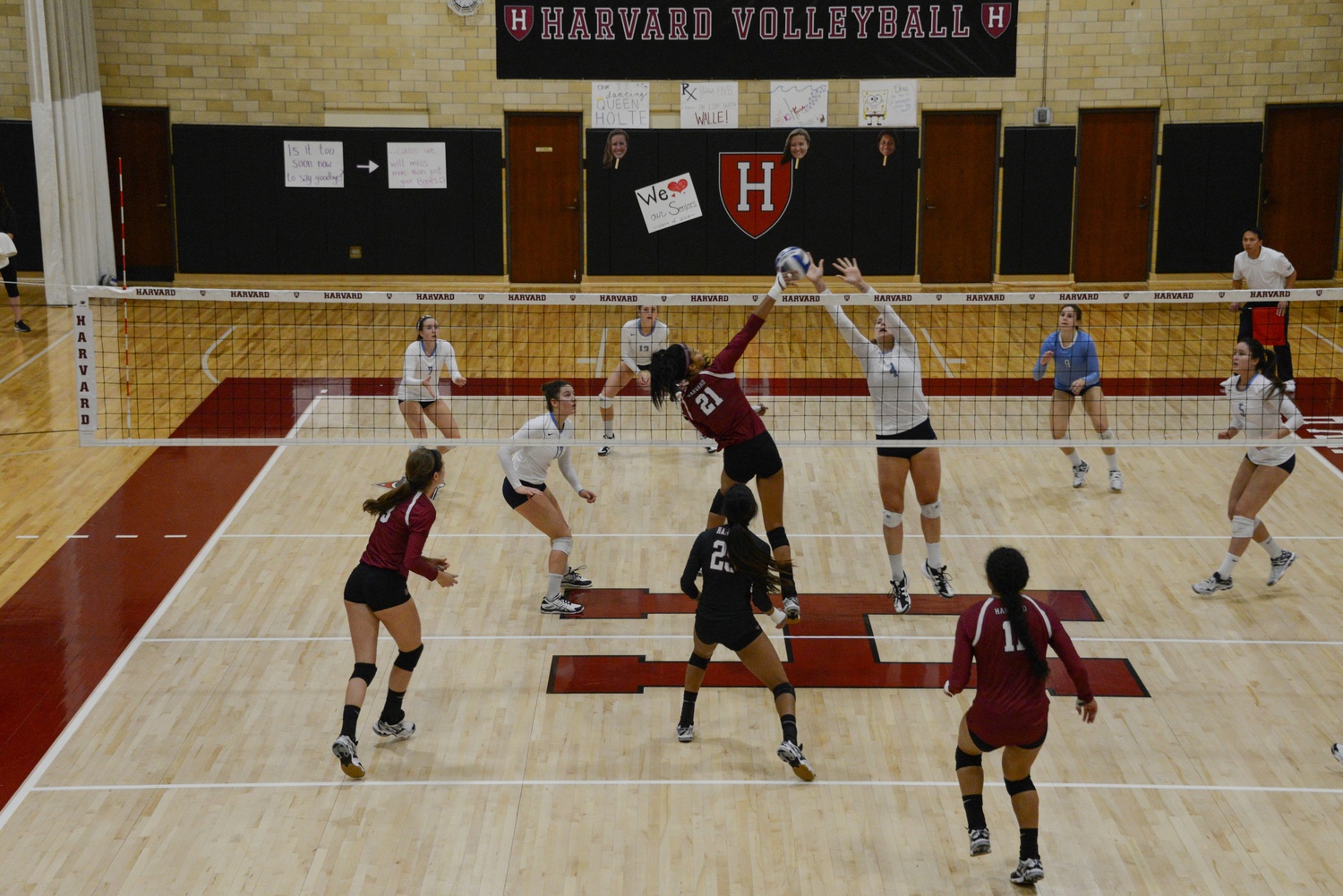 Sophomore Christina Cornelius spikes a ball during the Crimson’s 3-0 victory against Columbia on November 7, 2015. Without its four graduated seniors, the team will rely on all of its returning and new members, and especially Cornelius and co-captain Corie Bain to lead the team’s attack as it looks to snap its losing streak. By Cynthia Guo
By Kurt T. Bullard, Crimson Staff Writer

It is often when playing against completely new teams that a team develops. It is in these matchups that it realizes both the skills of which it has attained mastery, and what it needs to work on.

For the past two weekends, the Harvard women’s volleyball team (1-5) has stood face-to-face with unfamiliar opponents, both at the Beantown Challenge and the Baden Invitational hosted by Long Beach State. In these two tournaments, the team failed to establish itself on a new stage, dropping five of its six games in that stretch.

Being back in Eastern Standard Time this past Tuesday brought no new luck, as the team failed to pick up a win in its trip to New Hampshire.

“We’re definitely going to use that [UNH loss] as motivation,” Kebe said. “Hopefully that will be enough to push us through.”

But this upcoming weekend, the Crimson will match up against its crosstown rivals, providing an opportunity to see how the squad stacks up against regular foes.

Harvard will host Northeastern (6-4) and Boston College (5-3) at the New England Challenge this weekend. In last year’s rendition, the Crimson bested the Huskies, but fell to the Eagles in five sets.

But things have changed over the past year.

Unlike it had been for the past four years, Caroline Holte ‘16, Hannah Schmidt ‘16, Sindhu Vegesena ‘16 and Kathleen Wallace ‘16 no longer suit up for the Crimson. The quartet had a consistent impact in each of those years, having played 1,285 sets over the course of their careers at Harvard in which they helped bring home back-to-back Ivy League titles.

Senior Grace Weghorst also no longer is on the roster after dealing with nagging back injuries over the past few years. In her sophomore year, she finished second in kills en route to the Crimson’s first Ivy League title since 2004.

With the loss of five impact players, the Crimson will look to lean on its incoming freshman class to maintain the squad’s competitiveness.

“It’s important that we also are comfortable enough playing together and that’s going to come with time,” co-captain Corie Bain said. “Games like [UNH] are important to bring us together.”

With the departure of Vegesena, freshman Isabelle Tashima has taken full ownership of the libero position for Harvard. In her seven-game stint, the rookie has notched over three digs per set.

Other rookies have also stepped up and made an immediate impact. Maclaine Fields and Grace Roberts Burbank rank third and fifth in kills, respectively, while Erin McCarthy has filled in as a backup setter to three-team All-Ivy First Team member Corie Bain.

“Our freshmen are amazing,” sophomore Christina Cornelius said. “They have such great talent.”

If Cornelius is as good at recognizing talented freshmen as she was at being one herself, things bode well for Harvard. The California native’s 133 total blocks last year—a total good for second in program history—and her 2-plus kills per set were in large part why she was named Ivy League Rookie of the Year. This year, the sophomore will look to take an expanded role on offense by also spending time outside.

“Last season was a pretty good season for me,” Cornelius said. “And I’m just trying to improve and help the team as much as possible.”

With its top killer in Wallace gone to graduation, junior Caroline Labanowski, Paige Kebe, and sophomore Jocelyn Meyer will look to fill in the void the offensive vacuum. The three finished fifth, sixth, and eighth in kills per set last season, but the team will look to rely more heavily on them with Wallace’s 227 kills from last year gone.

All of these pieces will look to supplement senior setter Corie Bain as she sets out to finish one of the most storied volleyball careers in Ivy League history. After three All-Ivy First Team bids and two Ivy League championships in her first three years with the Crimson, Bain is now taking on another title entering this year: co-captain. As the sole senior on the team, Bain’s leadership—both on and off the court—is as important as ever.