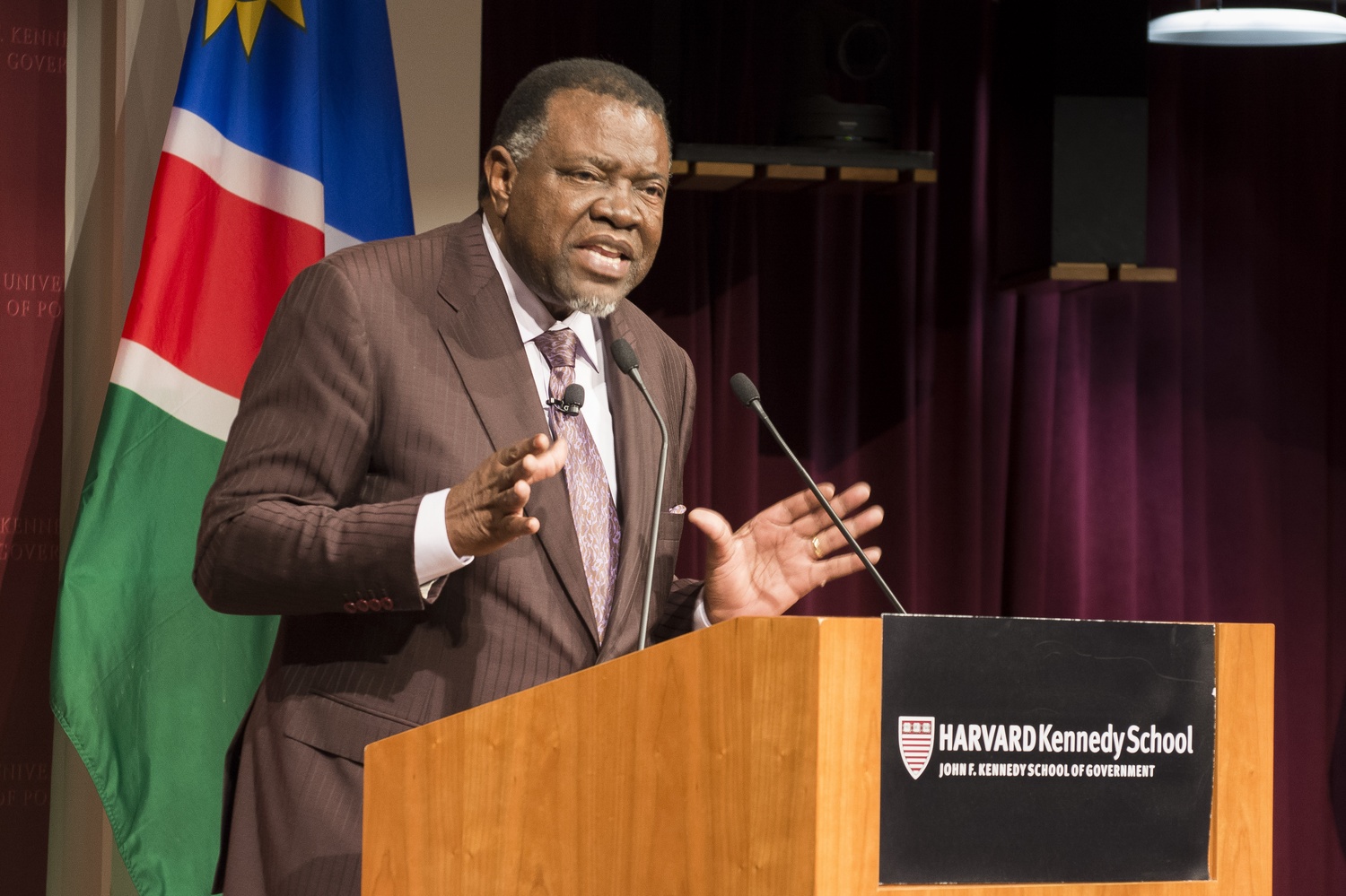 Namibian President Hage G. Geingob discussed the importance of political stability and sketched his plan to spur job growth in an address at the Institute of Politics Wednesday evening.

In a wide-ranging speech that covered topics including industrialization and racial division, Geingob focused on the need to build inclusive and transparent institutions to ensure faith in the country’s relatively young democracy—which was founded in 1990 after gaining independence from South Africa.

For Africa, “days of the coups are over,” Geingob declared near the start of his speech as he sought to reverse perceptions of the African continent as wracked with political turmoil.

He also listed three pillars he said are essential for ensuring both stability and civil liberties in Namibia and neighboring countries: transparent processes, peaceful mechanisms for dispute resolution, and fair institutions. The southwestern African country has had a stable democratic government that was recognized in 2014 with the infrequently awarded Mo Ibrahim Prize.

Geingob has been a leader in Namibia’s government for many years. He has served as president for more than a year and a half, and was previously prime minister from 1990 and 2002, and from 2012 to 2015. As president, Geingob has overseen a period of relatively solid economic growth though the country still is grappling with high unemployment, which was 28.1 percent in 2014 according to a Namibia Statistics Agency report.

However, the country is taking active steps to spur job creation and ensure equal access to the labor force with the five-year Harambee Plan for Prosperity, Geingob said. The plan incorporates social progress with economic growth, and represents his government’s effort to respond to challenges that include gender inequality.

Prior to the public address, Geingob spoke more specifically about ways his country is combatting gender disparity in its government in a group interview with student media organizations. Speaking about his SWAPO political party’s “zebra policy”—a plan to increase gender equality in parliament by mandating that half of his party’s nominees are male and half are female—he offered an enthusiastic explanation.

“We have been struggling for a long time to see more women in parliament,” he said in the interview, “but we think that it’s a good policy.”

After nominating an equal number of men and women in the 2014 elections, SWAPO won large majorities in both of Namibia’s legislative chambers. Of the entire parliament, over 40 percent of seats were won by women, up from around 25 percent in the previous parliament, he said. Geingob has also appointed women as ministers to various government posts.

The public address was followed by a short question and answer session, in which Geingob fielded questions from a packed John F. Kennedy Jr. Forum. The session grew tense when Geingob was challenged on his country’s policies toward land redistribution.

After the questioner, Fanelesibonge Mashwama ’17, asked whether Geingob would consider a more aggressive land redistribution policy, Geingob responded by cautioning against a government that was overly interventionist especially when it comes to such a racially and politically sensitive issue.

A number of those in the audience had traveled to Namibia through Harvard Business School’s Namibia Trek. Sijh A. B. Diagne, a Business School student who led the trek in March 2016, said what stood out to him about the address was the positive tone.

“I think [Geingob] did a great job of demystifying some of the stereotypes people have about Africa,” he said, referring to Geingob’s optimism about the state of democracy in his country. “I thought he was a great example of how a country that had been deeply divided given its colonial history was able to find some healing and some peace.”