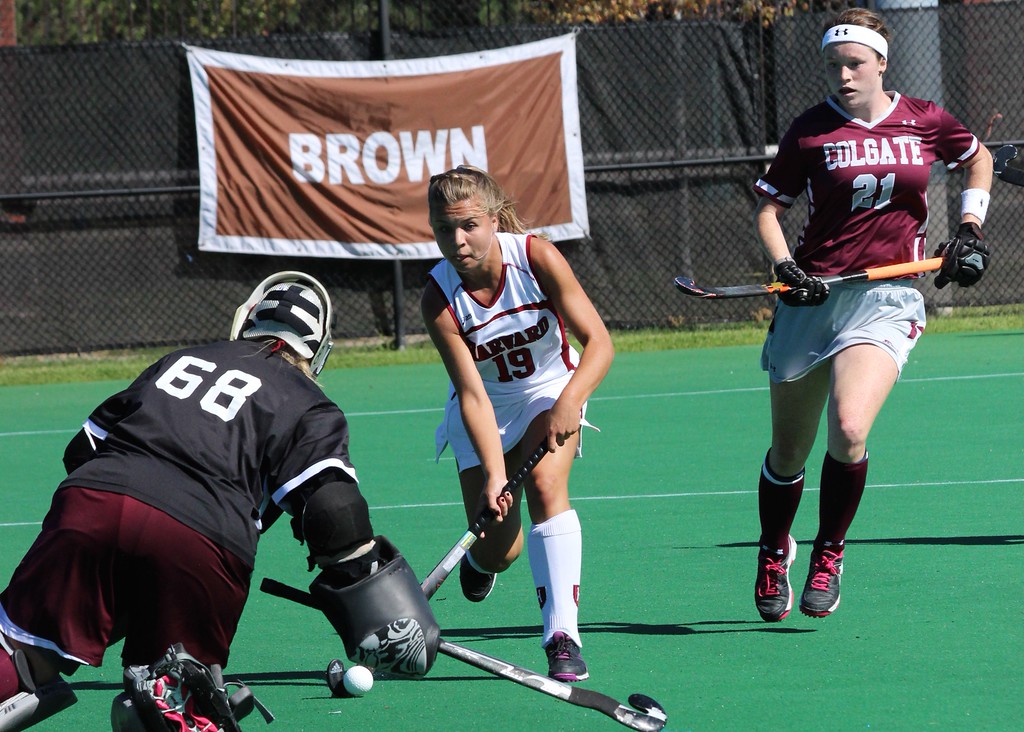 After an overtime win against Holy Cross on Friday, the Crimson faltered agains New Hampshire in double-overtime on Sunday.
By Amanda X. Fang, Crimson Staff Writer

The first weekend of field hockey played on the recently inaugurated Berylson Family Field Hockey Field did not disappoint. Both of Harvard’s games against Holy Cross (1-0) on Friday and New Hampshire (1-1) on Sunday resulted in tense overtime standoffs with neck-and-neck scores of 1-1 at the end of regulation.

The Crimson clinched a win against the Crusaders after a 10 round shootout when sophomore midfielder Emily Duarte made her debut goal of the season, solidifying a Harvard victory. However, Harvard was unable to repeat their overtime triumph against the Wildcats on Sunday.

The Crimson took an early lead on Sunday when junior forward Hannah Wellington found the back of the net with her second goal in just as many games only two minutes into the game.

Despite carrying the 1-0 lead until halftime, Harvard found itself locked into a 1-1 tie with New Hampshire just after halftime when Ashley Mendonca scored off a penalty corner. The Crimson struggled to keep pace with the Wildcats during the second half but managed to keep the score tied. However, a seventh minute goal by New Hampshire in overtime ensured a Harvard loss.

The Wildcats held the upperhand in both shots on goal and penalties, at 21-7 and 10-3, respectively.

Harvard and Holy Cross were neck and neck all the way through double overtime and nine rounds of shootouts until Duarte secured a Crimson victory with her goal in the tenth and final shootout in front of a cheering crowd.

“A lot of people showed up to the game and the vibe and overall atmosphere of the Friday night game was fantastic,” said coach Tjerk van her Waarden. “I think we started really well [and] were able to execute our game plan…we just had difficulty finding the net which eventually led to a 1-1 score towards the end of the game. The whole entire game was a fantastic mark and a showcase of our sport.”

In both the first and second halves of the game, Harvard had eight shots on goal to Holy Cross’ combined three. The Crimson continued its offensive domination by outshooting the Crusaders 7-3 through two overtimes. Despite also garnering 12 penalty corners to Holy Cross’ 5, Harvard could not convert any of their offensive attacks into goals.

“It is tough to think that maybe we should’ve converted some of those opportunities earlier so we wouldn’t have to go into overtime and then shootouts,” Cordrey said. “But it’s nice to see that we have the power to get those opportunities and now it’s just a matter of finishing them.”

The Crimson’s defense was equally strong with goalkeeper junior Olivia Startup not having to make a save all game.

Harvard field hockey is looking toward its most competitive season yet, with 4 of 17 opposing teams being nationally ranked in the NFHCA National Preseason Poll.

“I think this will be a really exciting season,” Cordrey said. “I don’t think people think we’re the team to beat top teams like UConn and BC, but I think this year with all the talent on the team, especially with the incoming freshman I think we have a chance.”

The Crimson will be newly joined this season by six freshman which allows for each position on the field to be double manned.

“It’s a fantastic situation to be in as coach,” van her Waarden said. “I think [the freshmen] provide us with a lot of flexibility, options and opportunities because we know we have enough people to play and contribute on the field. We want to grow as a program and with them we can compete and see how we match up with these top programs in the nation.”

Staff writer Amanda Fang can be reached at amandafang@college.harvard.edu.