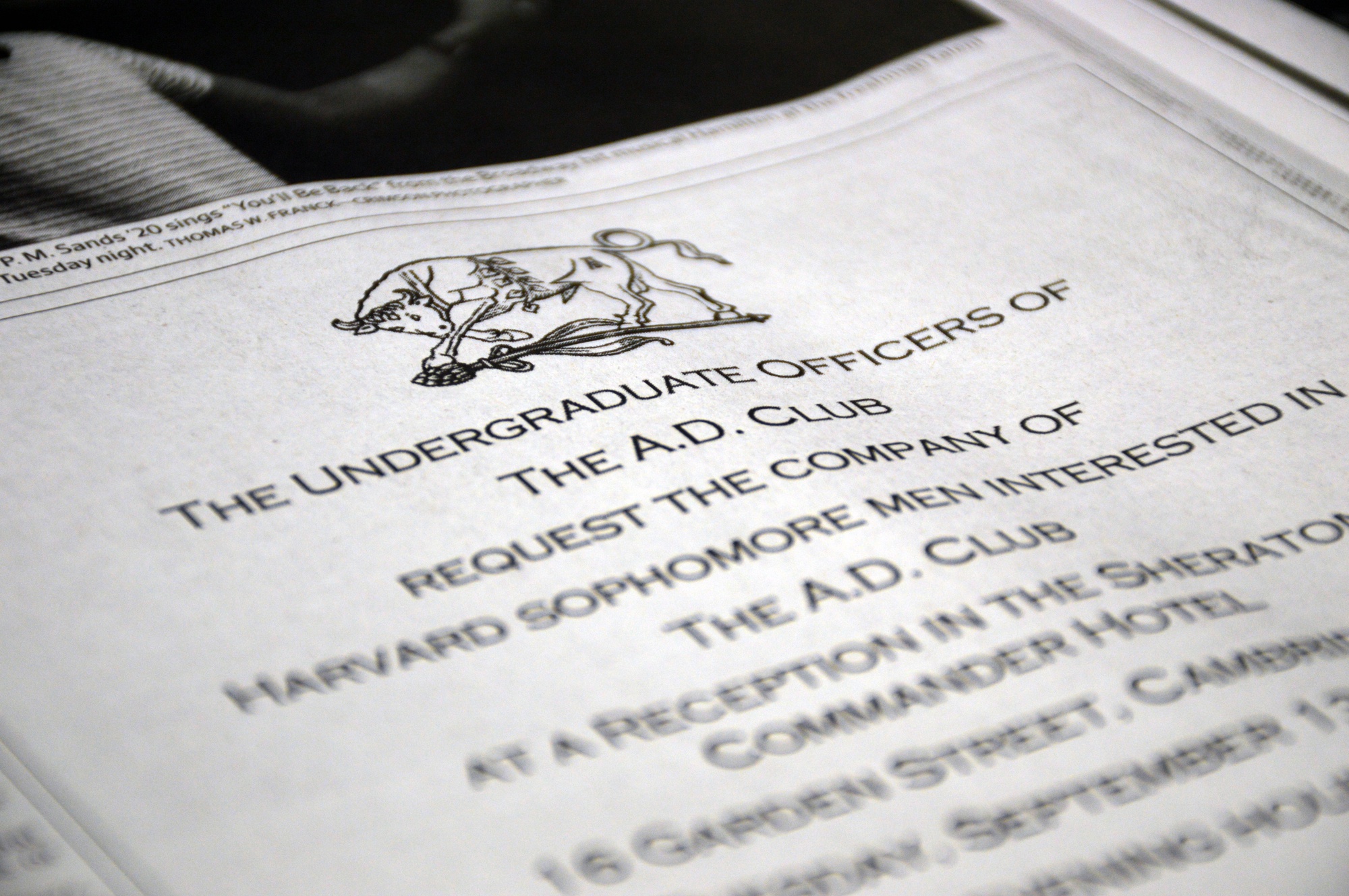 An advertisement for The A.D. Club that appeared in the Crimson on August 31st. The all-male club, which is holding its first open punch this fall, accidentally invited a female student named Cory to punch last week, after apparently assuming she was male because of her name.
By C. Ramsey Fahs

In early September, Cory Ransom ’19 received an emailed invitation from the A.D. Club that requested “the company of sophomore men” for the club’s Sept. 13 punch event.

The A.D. is a 180-year old all-male final club. Ransom is a 19-year-old woman living in Adams House.

The A.D.’s apparent gaff underscores—albeit humorously—many of the questions surrounding final clubs and gender in one of the last fall recruitment, or “punch,” seasons before a new College policy begins to penalize single-gender clubs.

This fall, the club is holding an “open” punch—any interested males may participate, as opposed to the hand-selected crop of years past—for the first time in its long history. Because the College does not recognize final clubs, the A.D. cannot publicize its open punch through traditional methods such as postering in College spaces and tabling at activity fairs. Instead, it had to get creative. In addition to emailed invitations, the A.D. bought advertisements in both the print edition of The Crimson and its webpage. 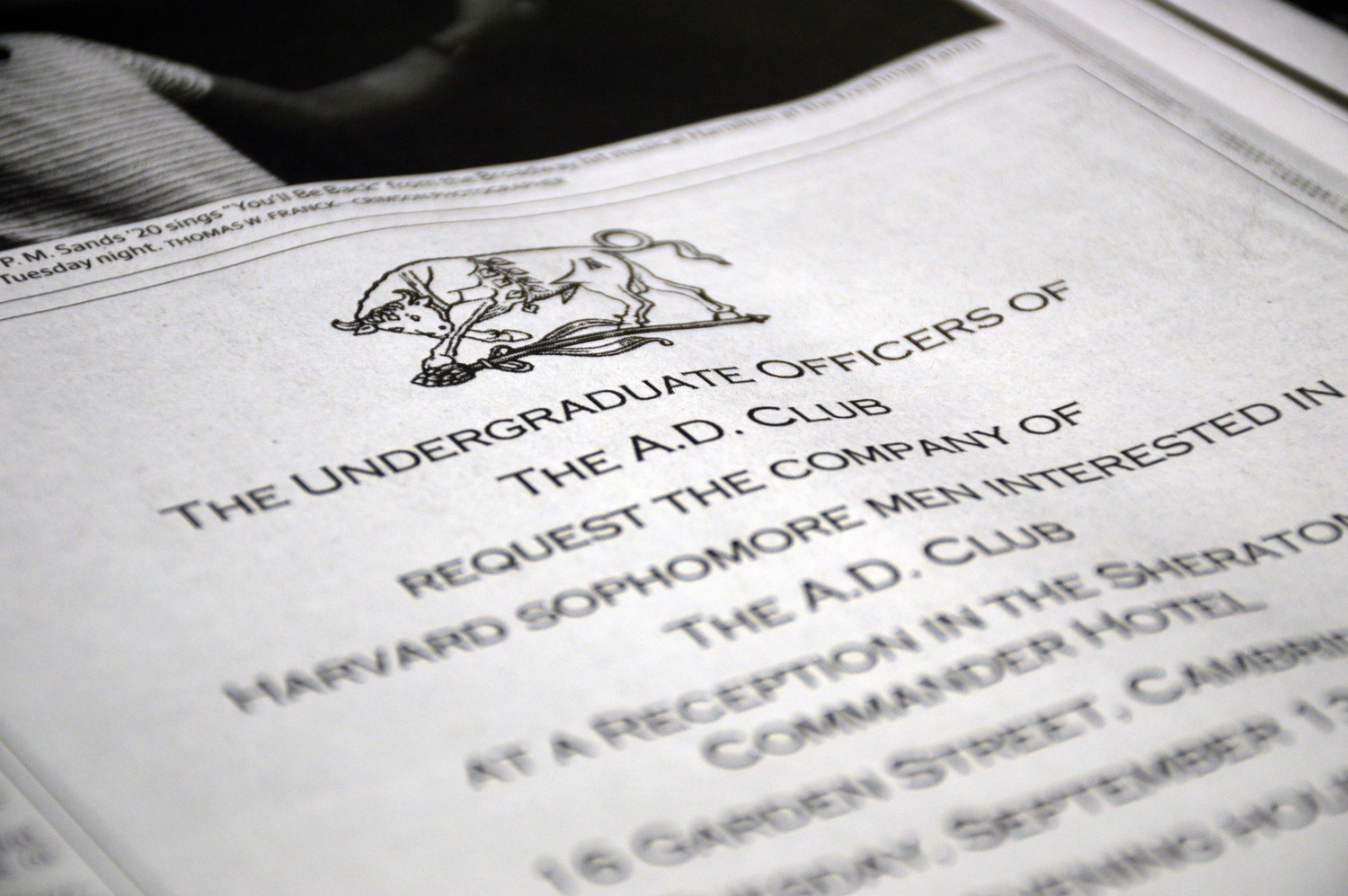 An advertisement for The A.D. Club that appeared in the Crimson on August 31st. The all-male club, which is holding its first open punch this fall, accidentally invited a female student named Cory to punch last week, after apparently assuming she was male because of her name. By Megan M. Ross

When Ransom learned that none of her female suitemates had also received the A.D.’s email, she speculated about what had actually happened.

“From the looks of it, it seems like they just went through and picked every masculine name [to email],” Ransom said.

After talking it over with her suitemates, Ransom decided to RSVP to the event despite its stipulation that the event was only for sophomore men. With the help of fellow sophomore Amelia Y. Goldberg ’19, Ransom composed a “very very posh” RSVP email. To their surprise, the A.D. confirmed her RSVP, apparently ignoring the image of a dress-clad Ransom that serves as her Gmail thumbnail.

Ransom has since started started a tongue-in-cheek Facebook event titled “THE PUNCH: the True Story of a GIRL named Cory.” On the event’s page, which lists more than 70 people “attending,” Ransom has posted light-hearted updates and jokes about the mix-up. Captioning a screenshot of the A.D.’s email confirming her RSVP, Ransom wrote “I guess no one in the AD has a facebook…”

Ransom’s case and others like it—she says she knows of several other non-male identifying students who received the A.D.’s initial email—illustrates the challenges for a club like the A.D. operating a single-gender open punch on a campus increasingly uncomfortable with traditional notions of gender.Gender issues are certainly not unique to final clubs—the Krokodiloes, an all-male a cappella group, recently gave a woman a callback to their auditions for the first time, kicking off a discussion within the a cappella community about single-gender policies.

Indeed, Ransom says her playful social media campaign is aimed at urging people to stop “assuming gender based on arbitrary things that have no connection.”

“Since there’s been so much tension and everything surrounding final clubs, I kind of wanted to make it a little bit of comedic relief while still addressing an issue,’” Ransom said.

The A.D.’s mistake may be the most visible stumbling block so far in the first punch season since the College’s announcement of historic sanctions, which, starting with the Class of 2021, will penalize student involvement in unrecognized single-gender social groups.

Still, many final club anticipated having at least one barrier to starting off their punch season. The Harvard College Facebook—an internal student directory clubs have traditionally used to find the addresses of first-round punches and slip invitations under their dorm room door—did not include student dorm numbers until recently as a result of a technical error, according to College spokesperson Rachael Dane.

As for Ransom, she says that unless the A.D. offers her an apology for the mix-up, she will attend the first punch event on Tuesday evening at the Sheraton Commander. Though the club’s invitation calls for coat and tie, Ransom said she would probably opt for a “really simple,” “really classy” black dress.