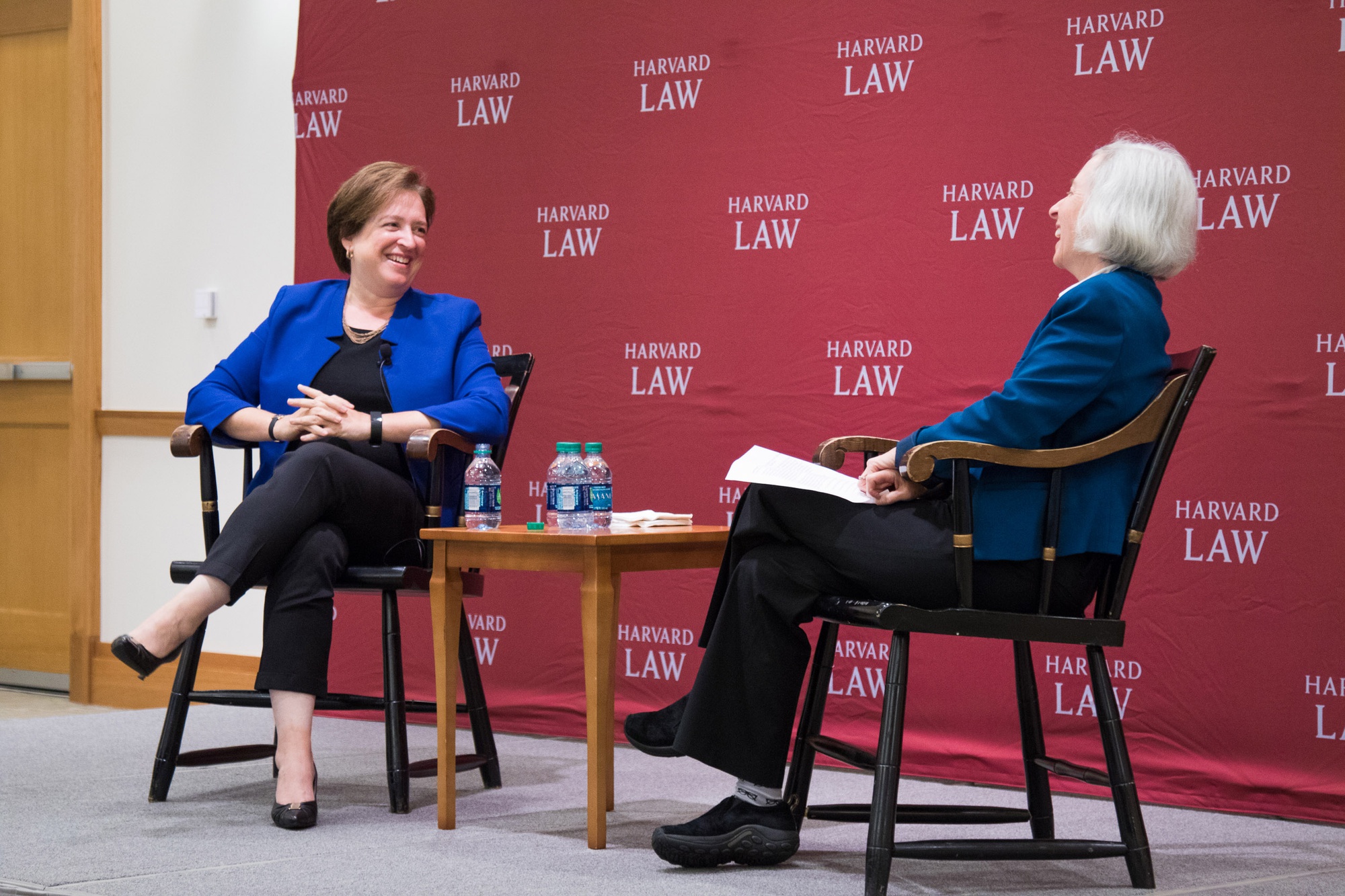 Supreme Court Justice and former Harvard Law School Dean Elena Kagan returned to her old stomping ground Thursday to reflect on her experience on the bench and and impart advice to incoming students.

“It’s one of the greatest pleasures of my life as dean to be able to welcome back a former dean,” Minow said. “There are so many thanks to you for what you have done for legal education and this school.”

Kagan, who graduated from the Law School in 1986, returned to the school as a professor in 1999 before becoming dean in 2003. She held the position until 2009, when President Barack Obama appointed her United States Solicitor General, and then to the Supreme Court in 2010. During her tenure as dean, Kagan expanded the faculty, oversaw construction of the school’s student center, implemented a major overhaul of the curriculum, and—as Minow pointed out to cheers from the audience—introduced free coffee for Law School affiliates.

Serving as a Supreme Court justice is a narrower, more predictable job than that of a law school dean, Kagan told the audience as she reflected on her time.

The justice alternated solemnity with well-received humor in her responses to Minow’s questions. She contrasted her job as dean with serving on the Supreme Court, described the difficulties of an eight-person court, recounted fond memories of former Supreme Court Justice Antonin G. Scalia, and poked fun at her responsibilities as the court’s youngest justice.

Kagan jokingly complained to students about the “special duties” she is required to perform as the junior Justice, which include overseeing the Court’s cafeteria committee.

“You get onto this court and you think you’re an important person, but then you have to spend over an hour a month thinking about chocolate chip cookies,” she said.

On a more serious note, Kagan described the challenges of a split court. Scalia’s death in February—and the subsequent refusal of Congress to approve federal judge and Harvard Law alumnus Merrick B. Garland ’74 as his replacement—left the country’s highest court with just eight members.

“There’s a reason why appellate courts have an odd number of members,” Kagan said. “A tie does nobody any good.”

The justice spoke of her friendship with Scalia, with whom she became close despite holding widely-diverging positions on politics and the law. The two went on hunting trips together to Wyoming and Virginia in their free time, and last November, Kagan returned to the Law School to deliver the annual lecture named for Scalia.

Kagan concluded the event by urging new Law students to use their time at the school to engage with classmates with whom they disagree.

“Talk to your classmates, especially those with different views,” Kagan told students. “Even if you come away from it disagreeing even more, at least you know what makes them tick, which is a useful thing.”

First-year student Michael Lemm appreciated Kagan’s advice, and said he was glad she recounted her friendship with Scalia. Lemm said the friendship demonstrated the importance of engaging with people with varying viewpoints.

Kagan is a role model for Aaima Asad, an LLM student from Pakistan who attended the event.

“[I’m here] just to listen to the firsthand experiences of a legend, especially from a female empowerment point of view. I come from a country... where no women are on the Supreme Court right now. Pakistan is a very patriarchal society,” Asad said. “It’s interesting to see females who made it.”