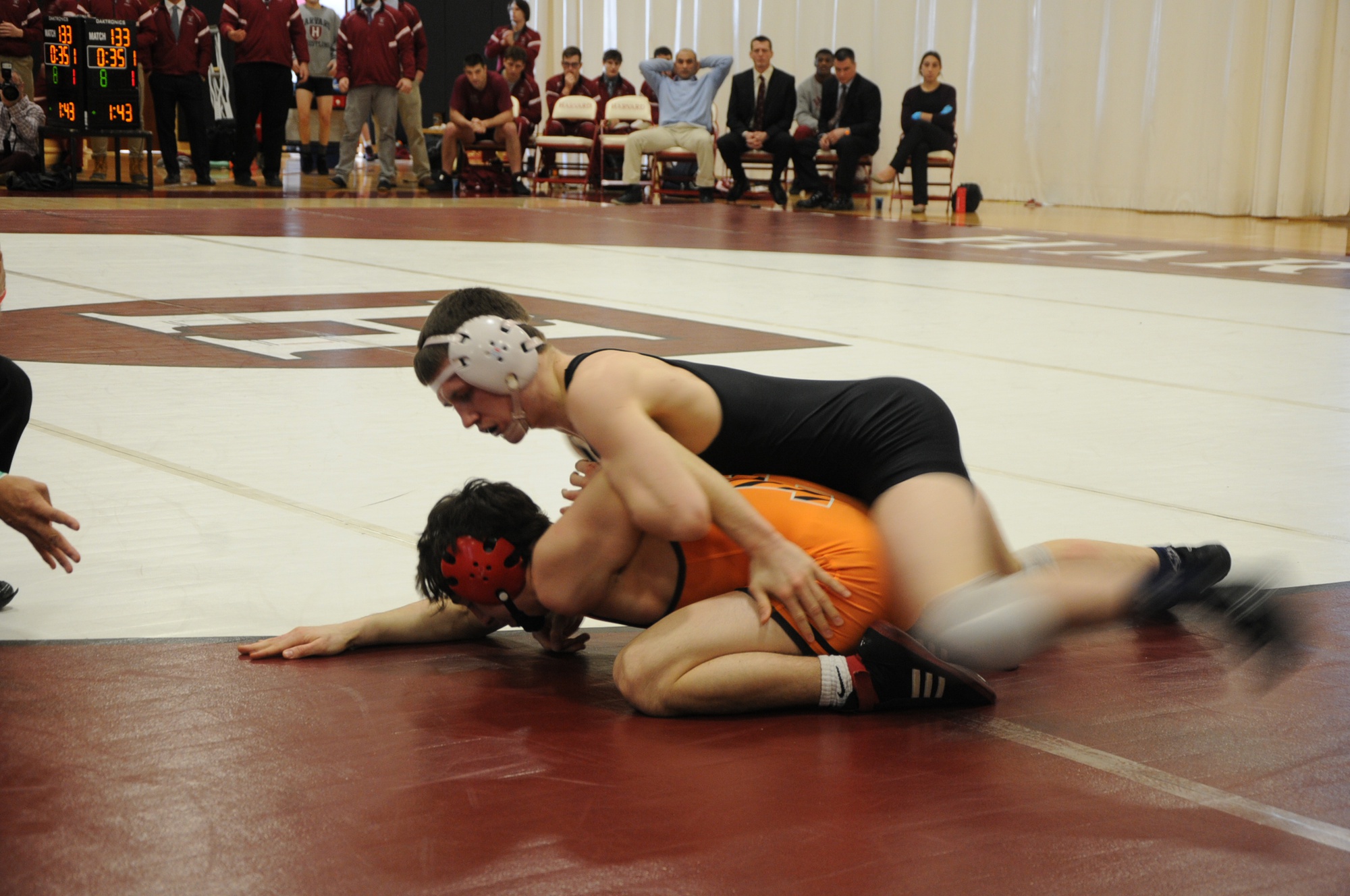 Wrestling in the first dual meet of his collegiate career, freshman A.J. Jaffe hardly looked his age as he led the Harvard squad with an undefeated day. His teammates could not find the same rhythm on the mat, however, as the Crimson (0-3) fell to Binghamton, West Virginia, and No. 8 NC State at the Pitt Duals.

In the final match of the day, the Mountaineers (2-8) dominated from the outset and posted three decisions and two technical falls, giving the Crimson little opportunity to bounce back.

“It’s a different mindset when we get to duals,” Harvard coach Jay Weiss said. “You have to put up points for the team and wrestle for more than yourself. I think that having that pressure on these guys helps, and will continue to help them as the season goes on.”

The Crimson picked up only a trio of wins against West Virginia, as junior tri-captain Josef Johnson, Jaffe, and senior tri-captain Gajdzik were responsible for their team’s nine points in the competition.

The contest between the Crimson and Bearcats (4-3) was much closer, as the score was tied at 16 heading into the heavyweight bouts. Then, however, two consecutive Binghamton wins secured the final margin.

“I don’t think we wrestled to our capabilities, I do think we are better than that,” Weiss said. “ But we are going to keep getting better as we keep at it.”

Junior Rico Stormer was the first of the heavies to go down, as he was overpowered by the Bearcats’ Mark Tracy in a major decision. In the following match, Gajdzik nearly put the Crimson back in contention for the lead but fell in a 3-1 loss to Connor Calkins by decision.

“I think that Nick will be the first person to tell you that he wishes he’d opened up a bit more,” Johnson said. “I think we need to work on getting to a place where if you have an early lead, you need to hold onto it and dominate the match.”

Jaffe extended his win streak to two in the meet, posting a commanding 7-2 performance over Joe Caruana, which also gave Harvard its first lead of the day.

“He was able to score points because he stayed aggressive for the entire seven minutes.” Johnson said. “I think he was really receptive to the corner, he listened to the coaches and he did a lot of things that I think the rest of us can work towards as well.”

The match against the Wolfpack (8-1) started on a poor note, as Johnson suffered only his sixth loss this season. Trailing from the beginning, Johnson never regained control of the bout and lost to Chad Pyke, 8-2.

“Going into the weekend I knew that was going to be my biggest test,” Johnson said. “I felt a little slow throughout the day, and I think I let that mental barrier affect me too much. I really think I could have benefitted from a different mindset.”

In the third match of the meet, Jaffe managed to pull Harvard within three points of NC State’s lead. The rookie blanked the Wolfpack’s 141 lb. contender, Robbie Rizzolini, 8-0, to keep Harvard within striking distance after a slow start.

“He looked great this weekend,” Weiss said. “I think he really showed what he could do at Midlands and built on that here. He can compete with anybody. He is just getting better every time he steps on the mat.”

The Crimson was unable to keep this momentum, though, dropping the next two matches as NC State widened its lead. Gajdzik and Bierdumpfel gained points for Harvard, but it was ultimately not enough to close the gap.

—Staff writer Jillian Dukes can be reached at jdukes01@college.harvard.edu.