Notebook: All Around Effort Gets it Done for Men's Basketball 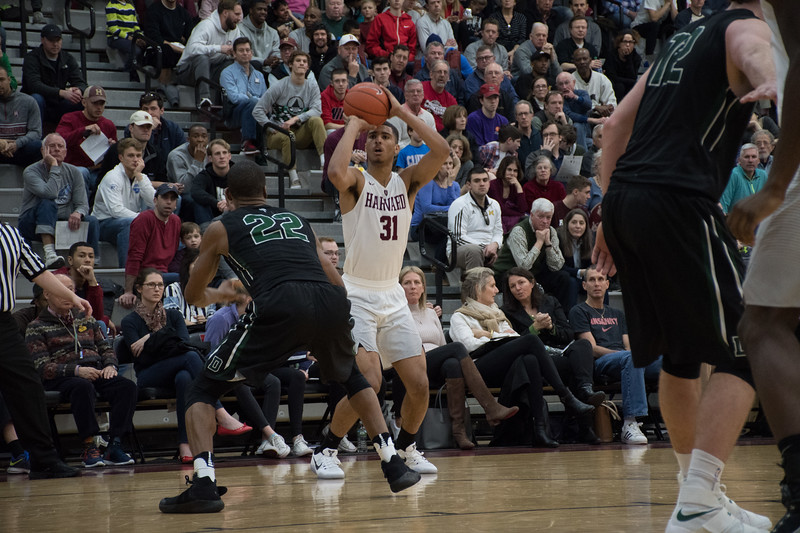 For the past two seasons, the Harvard men’s basketball team has been unable to beat Dartmouth twice. After coming out with a conference-opening win in the first matchup with Dartmouth each year, the Big Green has found a way to learn from its mistakes and defeat the Crimson.

Going into the locker room, it appeared that the trend had a chance to continue. Despite putting up an early 13-point lead thanks to hot shooting from behind the arc, Dartmouth (3-12, 0-2 Ivy League) ended the half up one as Miles Wright hit a buzzer-beating three to go up 35-34.

For Tommy Amaker, defense has always been a priority in his time as a coach at Harvard. A former NABC Defensive Player of the Year at Duke, Amaker highlights defense as an aspect of the sport controlled by effort, something to lean on even when shots aren’t falling.

That mantra fit in early against Dartmouth as Harvard maintained just a 3-2 lead through the first media timeout of the contest. After sophomore guard Corey Johnson hit a three to break the ice just 38 seconds into the game, nearly five minutes would pass before the Crimson scored another bucket. The Big Green, however, was kept similarly quiet. While sophomore guard Guilien Smith hit a layup with 18:25 to go, Harvard’s defense kept the game close while the offense went quiet.

“I praised them for how well we started the game, and I know we weren’t able to sustain that, but I was really impressed and praised them for their start and their energy on defense,” Amaker said.

While the defense lapsed midway through the first frame to allow Dartmouth to recover from an early 13-point deficit, it just bent, but did not break. Most notably, the defense prevented Big Green star Evan Boudreaux from finding a rhythm and breaking the game open for Dartmouth. While Boudreaux had 15 points, approximately his per game average, he shot just 5-of-11 from the field and had only five rebounds, compared to his average of nine per game.

“It was really just a team effort,” senior forward Zena Edosomwan said of Boudreaux. “It’s just trying deny him early and not give him open threes because you know he’s an offensive option they’re always looking at. You try to stop him early or just make everything a lot harder for him.”

Coming into the 2016-2017 season, expectations were high for Edosomwan. Coming off the best season of his collegiate career when he came just four rebounds shy of averaging a double-double, the senior has had a quieter-than-expected first half of the season. The Los Angeles native has started just six of 15 games and is averaging 6.6 points and 6.3 rebounds per game. On Saturday afternoon, however, Edosomwan showed how his role has evolved given the greater offensive efficiency of his teammates.

With the return of co-captain Siyani Chambers from injury and the addition of high-profile freshmen scorers such as Bryce Aiken and Seth Towns, Amaker has not looked to Edosomwan to be the high volume scorer of the past. Instead, he has taken on the role of rim protector, scoring from tip-ins and second chances as much as creating his own shot, and being tasked with creating a defensive presence on the other end of the floor.

The three-pointer was the highlight of Harvard’s offensive performance against Dartmouth, with the team sinking 13-of-24, just two makes shy of tying the team’s record under Amaker. Edosomwan, however, quietly amassed 15 points of his own off the bench. The senior was extremely efficient, making 7-of-8 from the floor. Off the glass, the senior had four of the team’s nine offensive rebounds. Defensively, Edosomwan was a presence in the lane, using his length to keep Boudreaux from getting comfortable and working his way to the rim, notching three blocks in the process.

In coming off the bench, Edosomwan provided a spark of energy on both ends of the floor as the starters tired from the quick pace of play early on. With such a large lineup compared to the typical college basketball team, Amaker has been able to be more selective in creating preferred matchups, which has led to significant variety of lineups.

“Our bench came in, with Bryce and Zena, and obviously Seth, giving us great minutes and great production, and then balance we get all over the floor from different guys makes it fun for our guys,” Amaker said.