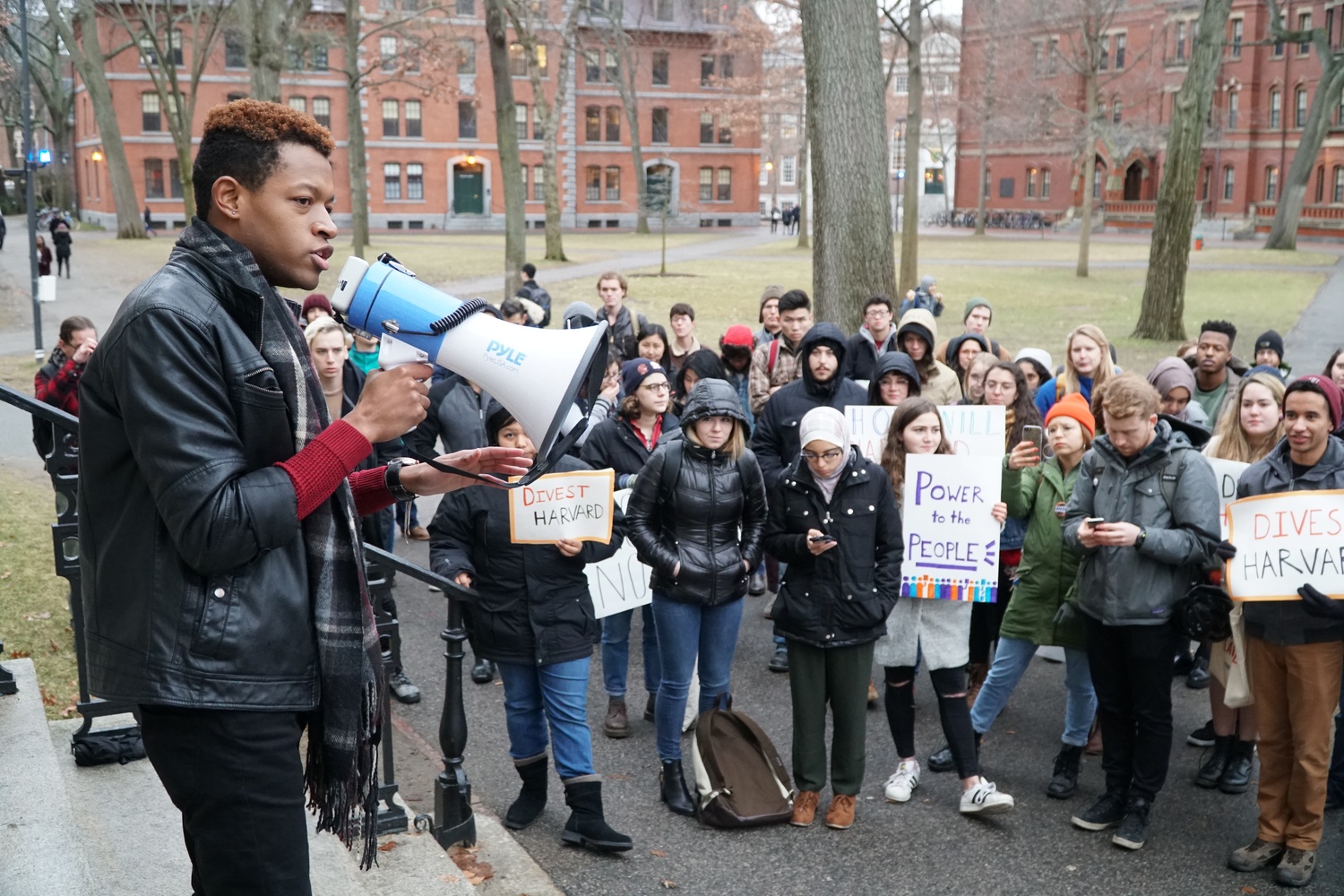 Jonathan S. Roberts '17 addresses the crowd at the 'Inaugurate A New Harvard' rally from the steps of University Hall. By Ryosuke Takashima
By Claire E. Parker

Around 100 students gathered in front of the John Harvard statue Monday afternoon, kicking off the event with a chant of “What do we want? Justice! When do we want it? Now!” The rally, dubbed “Inaugurate a New Harvard,” was co-sponsored by Divest Harvard, the Harvard Islamic Society, Our Harvard Can Do Better, Student Labor Action Movement, Act on a Dream, Protect Undocumented Students at Harvard, the Ethnic Studies Coalition, and Concilio Latino.

Student organizers spoke about the threats minority groups face under Trump—and the need for Harvard to take action—before marching through the sleet to Massachusetts Hall to deliver a letter addressed to Faust and “Trustees of Harvard College.”

“Today we come together to inaugurate a new era of student action and solidarity on campus,” students wrote in the letter. “We therefore call upon President Drew Faust and the Harvard administration to embark on a course of action that upholds our community values in the face of a new political reality.”

Trump’s policy proposals have concerned many on Harvard’s campus. He has pledged mass deportations of undocumented immigrants and discussed requiring Muslims to register with the federal government. His nominee for Secretary of Education declined to commit to enforcing current Title IX standards, and several Trump cabinet members have voiced skepticism about human impact on climate change.

Each signatory group makes demands in the letter, including calls for an Ethnic Studies Department, protections and resources for Muslim students, additional support for undocumented students, and divestment from fossil fuel companies, among other demands. It concludes by asking Faust for “prompt, on-the-record meetings to discuss our collective vision.”

“We appreciate student groups bringing a focus to these important issues,” University spokesperson Melodie L. Jackson wrote in a statement. “Harvard shares many of the same objectives – addressing climate change, deepening inclusion and belonging across our community, supporting students who may feel anxiety about new immigration policies, and preventing sexual assault and harassment.”

Harvard has already undertaken measures on several issues of concern to Monday’s demonstrators. In particular, the University is providing undocumented students with legal resources, and Faust said she will continue efforts to lobby lawmakers to preserve legal protections for undocumented students currently provided by DACA. The Harvard University Police Department has pledged not to inquire about Harvard students’ citizenship status or allow federal law enforcement officials to enter campus without a warrant.

Faust also created a committee in September to study diversity on campus and develop recommendations for fostering a more inclusive environment for minority students. She has also spoken out publicly about the need to act on climate change, though she has repeatedly said Harvard will not divest its endowment from fossil fuels. The University met its goal of reducing greenhouse gas emissions 30 percent by 2016, and Faust created a task force in December to formulate next steps on climate action.

Ana Andrade ’19, a member of Act on a Dream, said that while some activists are grateful for the steps Harvard has taken, the University should continue to take action to protect groups threatened by Trump.

“We are truly thankful for what Harvard has already done,” Andrade said. “We’re holding them accountable to what they’ve started… [and] Harvard has a responsibility as a University to do more.”

Organizers said the rally and letter are results of recent efforts among student activist groups to work together in the wake of Trump’s election. Students recently formed a Student Power Network to protest Trump, and several organizers of Monday’s rally attended the Student Power Network’s Wintersession trainings.