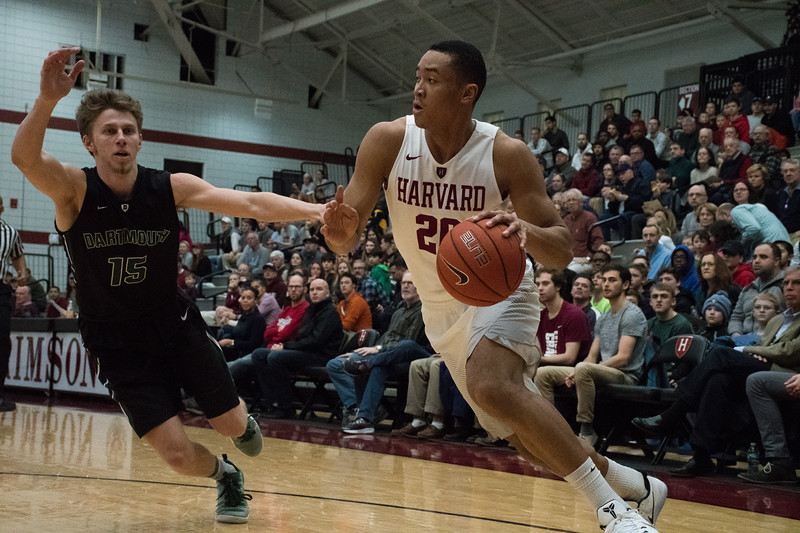 Freshman Justin Bassey, who scored 14 in the second half alone, gave the Crimson the win against Cornell with a go-ahead three with under a minute left on the clock.
By Troy Boccelli

Freshman Justin Bassey, who scored 14 in the second half alone, gave the Crimson the win against Cornell with a go-ahead three with under a minute left on the clock. By Megan M. Ross

But with just under a minute left on the clock Friday night against Cornell, Harvard tried to do just that. After going down by as many as 12 against the Big Red, the Crimson was within a point. Freshman guard Bryce Aiken drove inside and nearly falling kicked the ball out to freshman guard Justin Bassey. Bassey drained the corner three and gave Harvard the two point lead with 51 seconds left on the clock.

On its ensuing possession Cornell sophomore Matt Morgan drove inside and threw up what would have been the game tying layup only to be met by freshman forward Chris Lewis. With the shot clock running down the ball was in Aiken's hands again. Aiken drove inside and stepped back to the elbow. With eight seconds on the clock he pulled up and drained the two—and much like it had a year earlier, Harvard came away with the late win in another nailbiter in Ithaca off the hands of a freshman point guard. Last time, it was a 76-74 win off a jumper from then-freshman point guard Tommy McCarthy. This time, Aiken’s jumper sent Harvard home with a 77-71 victory.

“Bryce was sensational,” Amaker said. “He’s capable of literally putting us on his back in stretches. We’re so proud of him, that last shot. He knew he had it. That’s the confidence he plays with.”

What ended as a heartstopper began a lot differently. Two high scoring offenses showed up Friday in Ithaca and the first half was a lot of just that. Through the first frame the Big Red shot a striking 66 percent from the field.

Despite Harvard head coach Tommy Amaker’s squad being known for its depth, Cornell gave the Crimson a run for its money throughout the first period. All eight Big Red players who saw the floor in the first frame scored and as a whole the team only missed eight shots through the first 20 minutes of play. With Cornell getting open threes and easy backdoor cuts early, Amaker switched into a zone defense.

“I thought the zone was the difference,” Amaker said. “That enabled us to settle down, get some defensive boards, they missed some long-distance shots and we were able to kind of run out of the zone, transition out of it and that helped with our confidence.”

For its part the Crimson also came out shooting. Led by sophomore Corey Johnson who scored over a third of the Harvard’s 33 first-half points, Harvard shot nearly 50 percent from the field in the first frame.

But Harvard’s strong offensive performance could only keep them in striking distance. A late defensive breakdown gave Big Red senior Darryl Smith an easy dunk and Cornell ended the half up by seven, the largest deficit the Crimson has seen in conference this season.

Early in the second half, however, the Big Red only built on its lead. An early Harvard turnover gave the Big Red an early three and on its ensuing possession Cornell scored again to extend its lead to 12. From here the Crimson went on a 15-4 run to pull within one with just over ten minutes left on the clock.

From there, however, it was a story of two freshman. After scoring five points through the first period, Aiken exploded for 16 in the second half on 6-of-11 from the field. Bassey, who only had two at the half, put up 14 and did not miss a shot in the second period. The two combined for 30 of the Crimson’s 44 second half points and in a crowd of Big Red faithful, did quite a bit of silencing.

“It was a rough environment,” Aiken said. “They had a good showing from the audience and it really helped their momentum throughout the game but we just stuck together through thick and thin and we came out on top, able to pull out the ‘W’.”

The win keeps Harvard undefeated in conference and gave the Crimson it’s 10th win in 11 games.

“I just thought our team really gave incredible effort late and believing they could pull it out,” Amaker said. “It just says a lot about our team, especially for a lot of our young guys.”