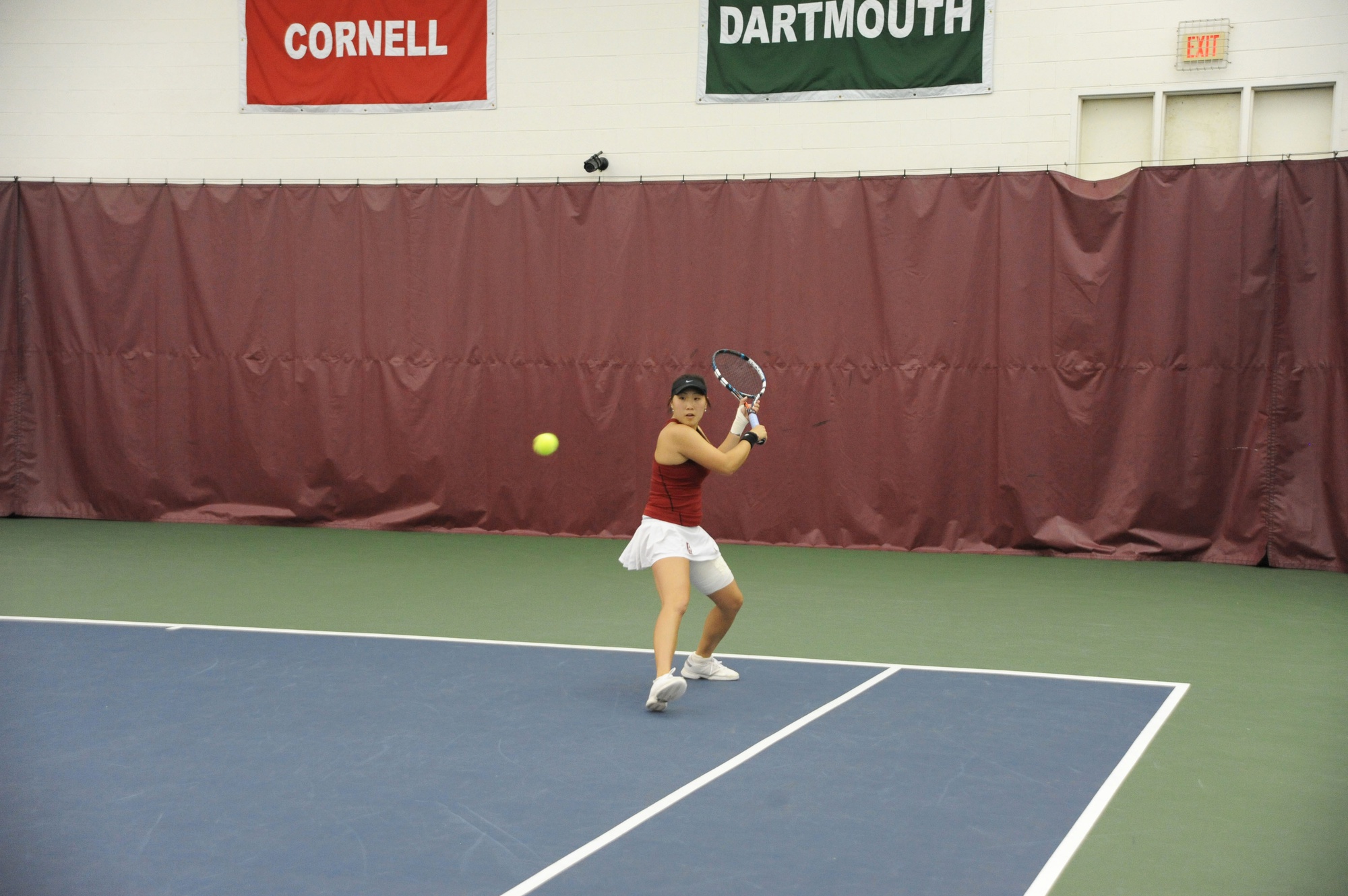 Nothing says spring is coming quite like the Intercollegiate Tennis Association’s Kick-Off Weekend. The tournament, which is played on 15 campus sites and features 60 of the nation’s top teams, saw the Harvard women’s tennis team travel to Columbus, Ohio for its second weekend trip of the spring season. The Crimson fell to Alabama, 4-0, on Saturday before losing to Florida State, 4-1, the next day. Hosts Ohio State topped the Crimson Tide (4-2) in Sunday’s final as the Seminoles (2-1) took third. 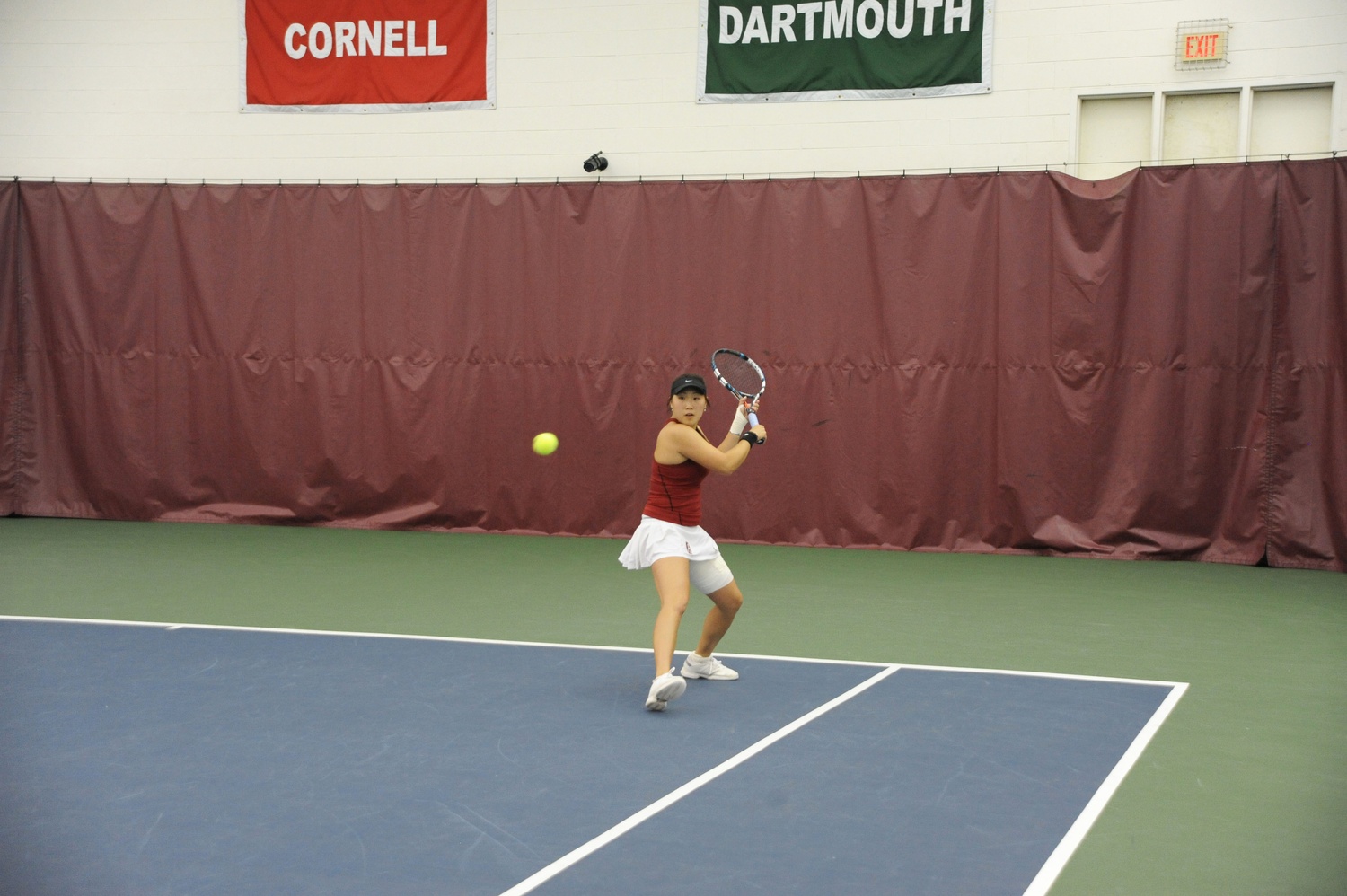 The women's tennis team concluded the fall season this weekend with the Harvard Invitational. By Matthew W DeShaw

Despite only winning one match on the weekend and with its first Ivy League match more than two months away, the extremely young Crimson (0-4) roster built upon its matches against Northwestern and DePaul last weekend to push two of the nation’s traditional tennis powers in Columbus.

“It’s only been two or three weeks and we’ve already seen a lot of improvement with everyone’s game and fitness-wise, also,” co-captain June Lee said. “Even from last weekend to this weekend, people are playing better and doing what they’ve been working on in practice, and it’s starting to show in the matches.”

Freshman Irene Lu was a standout performer for the Crimson, picking up a victory on Sunday to secure the first singles win by a Harvard freshman this spring. In total, five of the nine players who participated in matches over the weekend were freshmen. The Crimson has seven first-years on its 12-person team.

“Irene stands out right now as one of our top performers,” Harvard coach Green said. “[Freshmen] Jenna Friedel and Natasha Gonzalez, [and Lu] all have a lot of power, and right now we’re working on how to hone that power.”

After being shut out on Saturday, the Crimson did not have to wait long to pick up its first win on Sunday. Lu captured a victory over Seminoles sophomore Ariana Rahmanparast in the day’s first completed singles match. Lu, playing from the No. 5 spot, was efficient in her sweep. The Laurel, Md. native took the first set, 6-1, and won six of the eight sets in the second contest. In the more individual-focused fall season, Lu picked up three singles victories in her first college semester.

Despite the strong play of Lu, Harvard found itself behind the eight ball early on Sunday. The sophomore duo of Erica Oosterhout and Sabrina Xiong fell, 6-1, while the team’s top doubles pair, Lee and junior Annika Ringblom, the two upperclassmen on the squad, lost 6-3 to concede the all-important doubles point to Florida State.

“There were definitely moments in the match where the match could have gone either way,” Lee said. “That shows that we can hang in there with the top teams, so obviously that’s a good sign.”

In a battle of highly recruited freshmen, Seminoles Nandini Das proved to be too much for Harvard’s Jenna Friedel. Das, who lived in Mumbai until she was 11, went to IMG Academy in Bradenton, Fla., the same school that produced Serena Williams (who won the Australian Open the same day as Das beat Friedel), Andre Agassi, and Maria Sharapova. Friedel was one of two five-star recruits in the Crimson’s 23rd-ranked recruiting class.

Oosterhout and Lee each won eight games in losing efforts. Oosterhout, playing from No. 1, fell to junior Gabriella Castaneda while Lee was downed by sophomore Julia Mikulski at the second spot.

Despite winning three of the four all-time matchups in football, Alabama has never beaten Ohio State on the road. The Crimson Tide women’s tennis team had no problem picking up a victory in Columbus. Coming off a loss against Washington—which Huskies fans can use as a small consolation prize after their football team fell to Alabama in the Peach Bowl—the Crimson Tide made quick work of the Crimson on Saturday afternoon.

Friedel and Lu were unable to hang with Alabama’s Juliana Valero and Smith Hinton, falling 6-2. Oosterhout and freshman Lexi Milunovich experienced the same fate by the same score moments later. With the doubles point in hand, the Crimson Tide proceeded to sweep the next three matches. First singles was the first to finish, as senior Erin Routliffe, the No. 86 player in the nation, got the best of Oosterhout for the second time on the afternoon, this time by a score of 6-2, 6-2.

Alabama sophomore Andie Daniell was too much for Milunovich at No. 2, securing a 6-1, 6-3 win over the New Canaan, Conn. native. In the day’s closest completed singles match, Ringblom, who picked up a key doubles win last weekend in Chicago, fell to Crimson Tide freshman Maddie Pothoff at No. 5.

“Our team played really well this weekend,” Green said. “We played some of the top schools in the nation the last two weekends so we’ve been getting better week by week. Building is our main goal.”