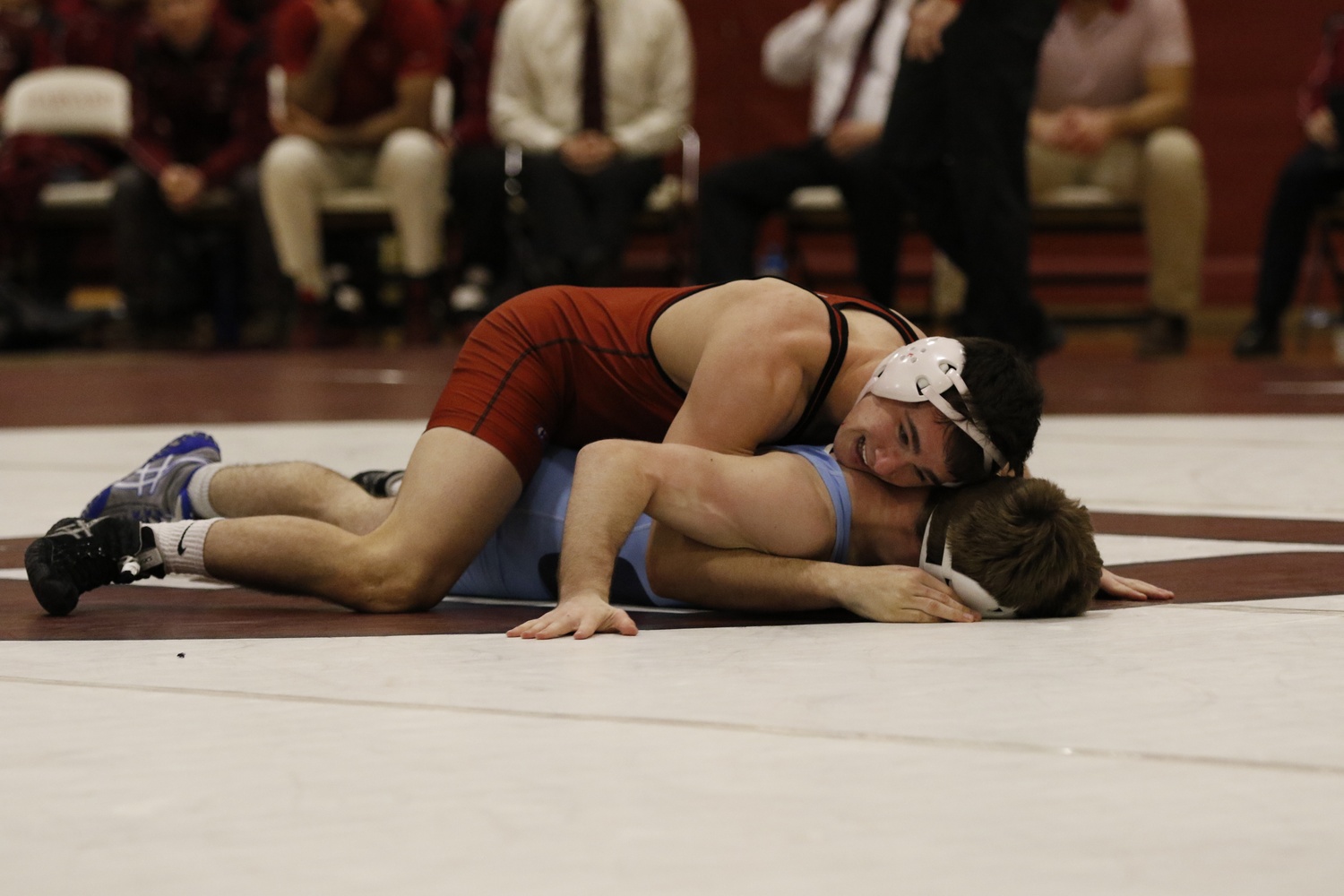 The state of New York descended on the Malkin Athletic Center on Saturday, as Columbia and Cornell arrived for a pair of matches against Harvard wrestling. The competitions marked the start of Ivy League competition for the Crimson, which posted a 1-1 showing last Saturday.

The last time that Harvard (2-5, 1-1) wrestled Cornell, Nick Gajdzik lost more than his match. He lost his season, too.

The injury happened in a flash. But one twist of a knee was enough to sideline Gajdzik for the rest of the year.

On Saturday night, supported by a renovated knee, the fifth-year senior got a chance at revenge. At the Malkin Athletic Center, Gajdzik wrestled Jeramy Sweany, the same opponent that he had battled in 2016.

This time, Gajdzik emerged with an intact knee, a 7-4 win by decision, and an ovation from family and friends.

“That’s an injury that very well could have ended my career rather than just a season,” the tri-captain said. “I was really pumped. It was my second chance, and I think I made the most of it.”

However, Gajdzik’s success proved aberrant on a night when No. 9 Cornell defended its reputation with a 33-11 victory.

More emblematic was the cousin-versus-cousin duel between the Crimson’s Kanon Dean and the Big Red’s Gabriel Dean. The senior Gabriel, a back-to-back NCAA champion, topped the junior Dean by fall.

Even the most dependable Harvard wrestlers struggled to gain traction. Tri-captain Josef Johnson entered with a 23-6 record, but he dropped a 14-2 major decision.

Still, the Crimson built an early lead on the strength of wins by freshman Connor Sakmar (by fall), sophomore Samuel Goldman (17-1 by technical fall), and freshman A.J. Jaffe (7-5 by decision).

“In the Cornell match, that’s one of the best teams in the country,” assistant coach Sean Arrington said. “Our guys were responding to the challenge, and they wrestled hard.”

Slowly Columbia had crept back into the match. At one point, the Crimson had held a 14-4 lead, but as Johnson prepared to face Austin Coniker, the score stood at 14-10.

That margin, it turned out, was as close as the visitors would get. Johnson reversed the tide with an 8-0 win by major decision, and Dean and Kirby followed with 8-4 and 12-8 decisions, respectively.

Regarding the final result, the final bout of the day didn’t matter. Even though Gajdzik went down 9-0 by major decision, Harvard still exited with a 24-14 victory—the team’s second win in three contests.

“Our team came out firing in that much,” Gajdzik said. “Holistically we looked fantastic.”

Again, the start of the lineup proved successful, as Jaffe and Goldman won to post the only 2-0 records on the weekend. While Goldman triumphed by forfeit, Jaffe earned a 9-4 decision.

In this contest, Ladnier proved victorious as well, winning 18-3 by technical fall. These early results built a 10-point cushion for Harvard and allowed the team to weather a pair of losses by Knight and Bierdumpfel, both by decision.

Also redeemed as Sakmar, who opened the day with a 10-2 defeat by major decision to Johnson Mai.

“We truly do have a great team this year, not only of wrestlers but of people as well,” Gajdzik said. “That’s something we pride ourselves about at Harvard wrestling.”