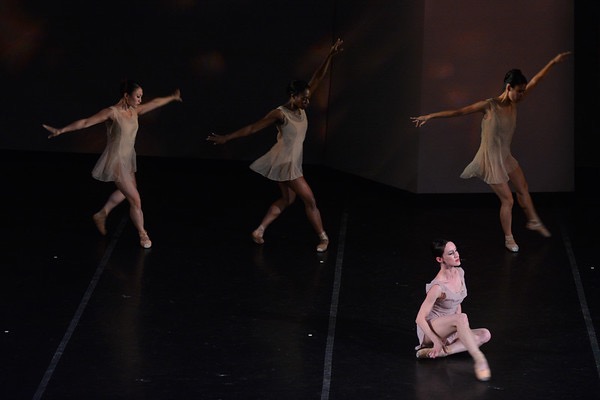 José Mateo Ballet Theatre’s October series, “Assault on the Senses,” is not as bone-rattling as the title would suggest, but the three ballets included are both haunting and illuminated with moments of passion. The show, choreographed by Mateo, is running Oct. 6 - Oct. 29 in Sanctuary Theater inside the Old Cambridge Baptist Church, where the audience is seated cabaret-style, up close to the dancers. Sensational staging is impossible here, and the costumes are appropriately minimalist to match the small space, so any sensory shocks must come from the details in the dancers’ movements. Among the three ballets, “Fearless Symmetries” (2008) most successfully takes up this challenge.

“Fearless Symmetries” is buoyed by the punchy, industrial score—John Adams’ “Fearful Symmetries”—and propelled by Junichi Fukuda’s rapturous physical acting. In his athletic solo, his timing while exploding into leaps allows certain notes seemingly to suspend him mid-jump. He is equally alluring in understated acting, as in a moment when his character becomes distracted by a new crowd of sprightly dancers before sheepishly rushing off to find his partner. Lauren Ganther’s cool, confident style suits her role as Fukuda’s seducer.

Ballet traditionally operates within strict gender roles, but in a few refreshing moments, “Fearless Symmetries” unites men and women in similar choreography, costume, and carriage. Sassy shoulder rolls and brisk petit allegro are some of the ballet’s repeating motions, and both the men and women perform them with indistinguishable, lithe gestures. The ballet’s entropic progression toward the discomposure of characters’ relationships and choreography, however, goes beyond the persistent vigor of the first half. The development is most strongly embodied by Magdalena Gyftopoulos, who begins as an anxious partner to Fukuda with sharp gestures and flexed hands and later returns with silky movements as a phantom-like object of attention.

In “Isle of the Dead” (1993), the corps de ballet becomes a visually chilling force that the solo and partnering work in this ballet do not match. The corps dancers strike anguished poses, such as an attitude with head thrown back, to an ominous beat. In one section, they repeatedly crumple to the ground between their grand jetés. Their limbs drag without urgency, as if through molasses, so the dancing feels more impassive and measured than the jagged despair of either the Rachmaninoff score or the Arnold Böcklin painting that inspired it. Unfortunately, even the falls become predictable. The lack of impulsivity makes for a corps that is convincing as an unthinking mass of bodies, but not as a scary one.

James MacMillan’s modernist “Symphony No. 3,” the score of the ballet “Covens” (2003), does not lend itself easily to choreography. With its stretched-out string noise and discombobulated rhythms, it sometimes sounds better suited to the soundtrack for a space film. However, it is based on the story of a witch hunt, an idea that Mateo has abstracted in his choreography to represent mass hysteria. Dancers run across the stage and hurriedly grasp and release hands, as if distrustful, while the patter of their feet serves as rugged percussion.

Like the symphony, the choreography of “Covens” can be frustrating in its denial of any clear story. Certain characters stand out, though. Brittany Bush’s regal posture in her solitary role makes her seem like a power unaffected by the frenzy that has swept up the other characters. A group of male dancers reinforce a forcefully rhythmic moment of the music with an exciting sequence of jumps. In a pas de deux in the ballet’s second half, Angie DeWolf surges into lifts with acrobatic passion, and Spencer Doru Keith matches with intensely attentive gestures. Their chemistry creates enough interest to fully regain any attention lost. It is more fruitful to think of “Assault on the Senses” as thoughtfully probing the senses, rather than assaulting them.