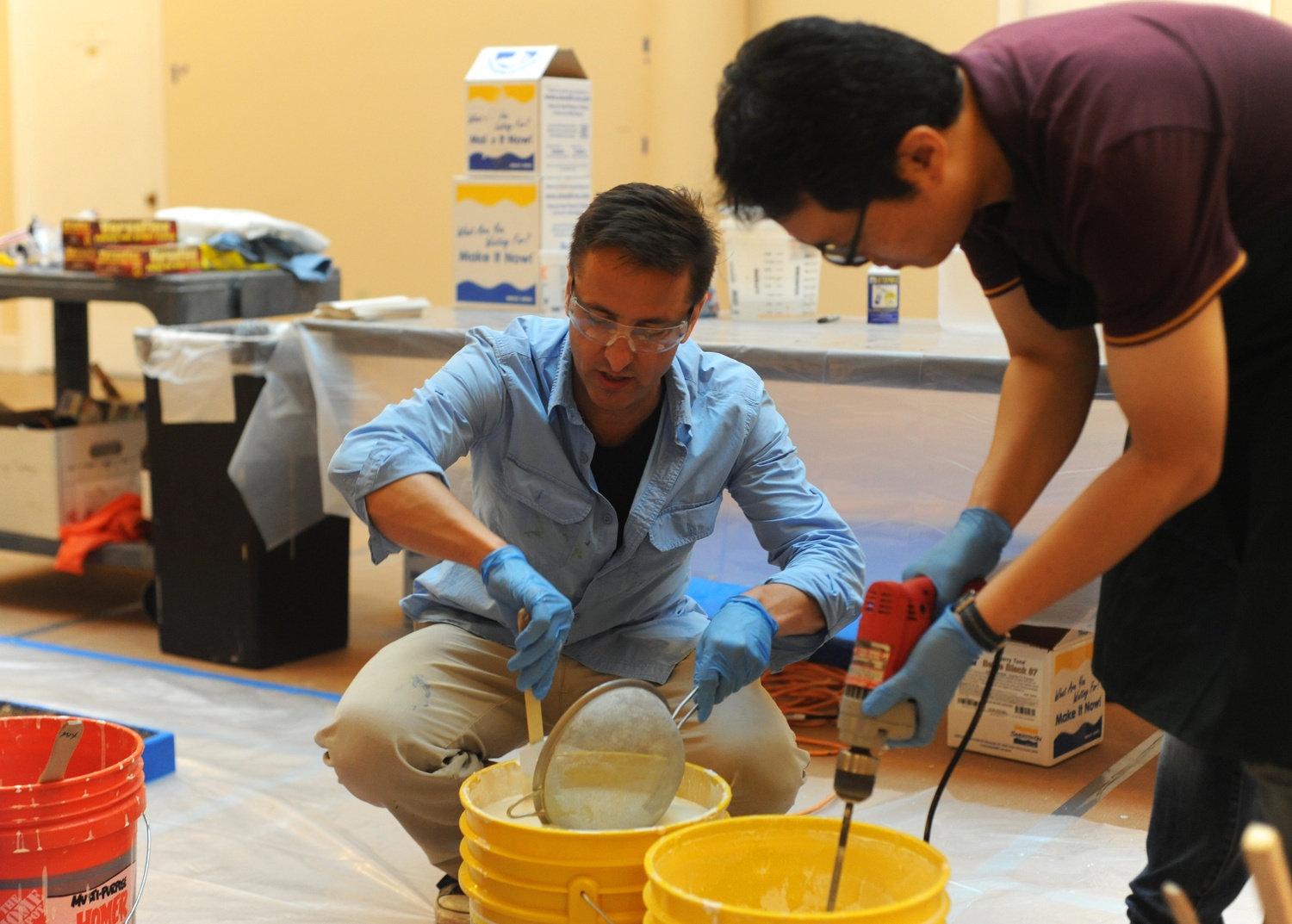 Adam J. Aja, the assistant curator of collections at the Harvard Semitic Museum, demonstrates proper sieving technique for the production of plaster casts. Aja and his team worked to cast the “Dream Stele” of King Thutmose IV. By Matthew W DeShaw
By Ahab Chopra and Cindy H. Zhang, Contributing Writers

For the past two weeks, scholars at the Harvard Semitic Museum and a team of student archaeologists have labored over resin and molds with the aim of bringing a piece of the Great Sphinx—or at least a facsimile of it—to Cambridge.

Adam J. Aja and Peter D. Manuelian—the assistant curator and director of the Semitic Museum, respectively—are working with students to create an innovative resin cast of the “Dream Stela,” an enormous slab engraved with hieroglyphics that sits between the front paws of the Great Sphinx in Giza, Egypt.

According to Manuelian, the hieroglyphs on the famed stela tell the story of how Thutmose IV cleared away the sand burying the sphinx and was subsequently made king.

“Is it true? Did it really happen? Probably not,” Manuelian said. “But it’s a bit of royal propaganda, royal legitimation that he’s using to align himself with the sphinx, who is linked to the sun god.”

Plaster casts of the “Dream Stela” were first made in the mid-1800s, and several copies exist around the world. Aja said he developed the new resin cast technique while making new copies of the museum’s collection of Neo-Assyrian palace art.

“This is all about fabricating the past, recreating antiquity, and doing it as teaching tools, study tools and research tools…For the last two weeks [Aja’s] been working with different resin, mixing them together and trying to get a real granite look,” Manuelian said, referring to the pink resin that Aja recently developed, which was designed to resemble the stela’s pink granite.

As part of an effort to “reinvigorate Harvard’s spectacular legacy of Egyptology and archaeology,” the museum will open a gallery on the subject in December, Manuelian said. The stela cast will be displayed there upon completion.

“But as cool as it is, it’s ripped out of context, right? You know, the whole thing that makes it so special is that it’s right under the sphinx’s head,” Manuelian said. To that end, Manuelian received a grant from the Barajas Dean’s Innovation Fund to develop an augmented reality app, likely completed near the end of the semester, to accompany the physical exhibit.

“You’ll look through your device and you’ll be able to look up and see the head of the sphinx above you, the paws next to you,” Aja said, envisioning the final product. “We’ll put you back in the context. You’ll see the pyramids in the distance. ”

For a museum dedicated to antiquity, the use of cutting-edge technology and innovative new techniques indicates a step in a new direction.

“My plan as director of the museum is really to try to revitalize the place, make it a fun, exciting, and informative place so that all Harvard undergraduates will come here,” Manuelian said.