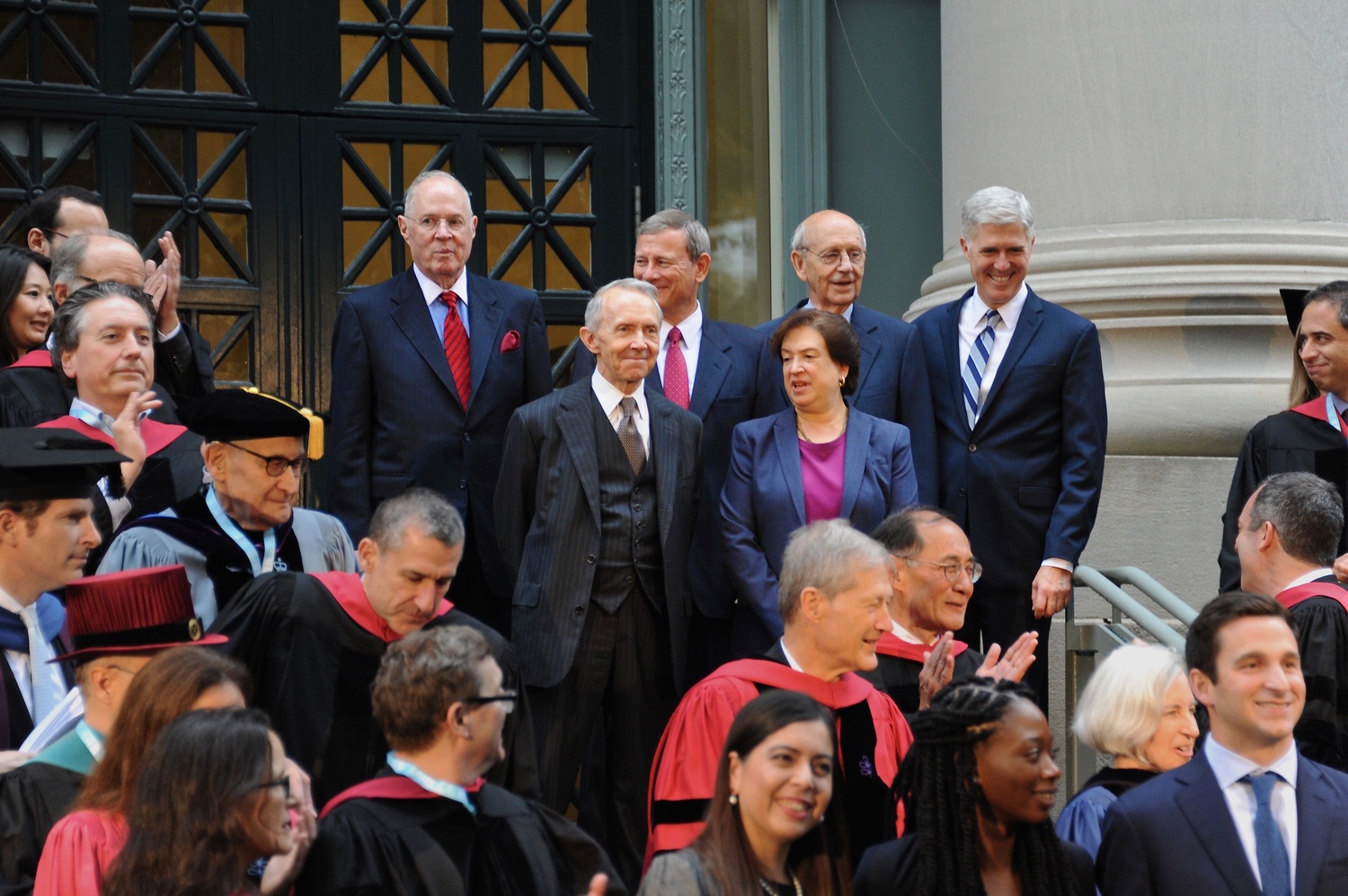 Six members of the Supreme Court—one former and five current Justices—kicked off a marquee event of the Law School’s year-long bicentennial celebrations Thursday in Sanders Theatre.

The Justices, including Chief Justice John G. Roberts Jr. ’76 and former Law School dean Elena Kagan, all attended the Law School as students and returned for the evening.

The event, billed “HLS in the World,” featured remarks and a question and answer session between the Justices and current Law School Dean John F. Manning ’82. Manning, who introduced the Justices, spoke about the school’s outsized presence on the Court and in other high-profile institutions.

“Our alumni are leaders in area after area, field after field, year after year, and now we can say century after century,” Manning said. “What’s so cool about all of this is, if you step back, you will quickly see that Harvard lawyers are often the leading voice on all sides of the important issues that society and the world face.”

The Justices discussed the experiences that prepared them best for serving on the bench, listed former Justices they’d most like to have a meal with, and recounted memories of their days at Harvard Law School.

Discussing the more technical aspects of her job, Kagan compared her approach in writing decisions for the Court to her time as a professor at the Law School.

“What we’re trying to do is explain really complicated things to people who are interested, who want to understand them, but don’t necessarily have that knowledge right then and there,” Kagan said. “I think it’s a lot like what I would do when I would think about preparing for class.”

Justice Anthony M. Kennedy followed, expanding on the Court’s intentions with each of its rulings.

“We write in order to inspire allegiance to the result,” Kennedy said.

The Justices also brought their sense of humor to the conversation—Roberts opened by remarking that “a minority of my colleagues send their regrets,” referring to the four current Justices without Harvard Law School degrees. David H. Souter ’61, a former Justice, told a story about ending up in University Health services after staging a fake sword duel during his days as a Freshman Proctor. Kagan revealed that she doesn’t use contractions when writing majority opinions, only in dissenting opinions where “you can let go a little bit more.”

The Justices also offered advice to current students and alumni. Justice Stephen G. Breyer said that he most respects lawyers who contribute to society.

“It’s tough to be a lawyer. Those nights in Langdell, they pay off. They’re worth it,” Gorsuch said. “To know the law, to be able to serve your client well, requires a certain amount of hard work.”

The summit’s events continue Friday and feature more than 60 sessions with speakers, including current senators, federal judges, academics, and alumni from a variety of legal backgrounds.